As an amateur astronomer, I’m always looking for ideas and products to make my observing and imaging more enjoyable and productive and as the owner of a Meade LXD75 SN-8, I had been interested in the idea of "hypertuning" my mount ever since I came across a post about it on Cloudy Nights. So it was that after only a month of owning my telescope that I purchased the Do-It-Yourself Hypertune DVD and hypertuned my mount at home. (Note: the DVD I purchased was from scopetrader.com, it is now available from deepspaceproducts.com.) 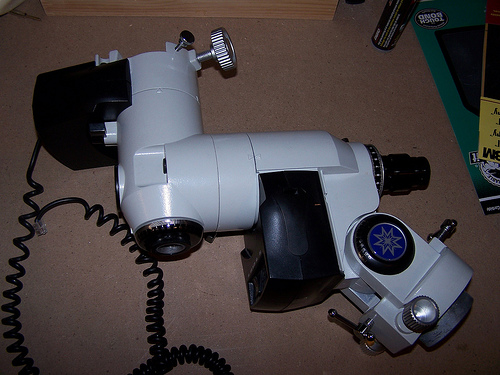 LXD75 Mount to be Hypertuned

The idea behind hypertuning is that the LXD55 mount (of which the LXD75 is a descendant) is a very good mount, but can be better with some elbow grease having been applied to it. The DIY Hypertune DVD was made using an LXD55 mount, but the changes to performing the procedure on an LXD75 are minimal and I felt that I could figure them out as I watched. The procedure involves stripping down the mount to its parts, polishing them, replacing the factory applied grease (which seems more like a glue than a lubricant) and adjusting the fit of everything before you put it back together. Because I had been having some problems with my RA axis sticking, I hoped this would help. After ordering the DVD, it arrived promptly and included instructions on what I needed to get in order to do the hypertune. They recommended that I get some white lithium grease, degreaser, thread locker, polishing compounds and sandpapers and tools. I went out and got the stuff they recommended and I was ready to hypertune my mount. First, though, I watched the entire DVD through without doing anything. The whole DVD is about 3 hours long and I wanted to make sure I was familiar with what I’d be doing before I did it.

The DVD itself is not going to win any academy awards, but it’s easy to follow and understand and the guy doing the hypertune does a great job of explaining things and demonstrating them in an easy to understand manner. I really give it high marks. It does what it intends to do, which is teach you how to hypertune your mount. The process is easy to follow and rarely goes so fast that you need to pause it. Incidentally, I took my laptop to my workshop so that I could watch the DVD right there and follow along. (I cannot imagine doing a hypertune without being able to watch the DVD at the same time (at least not your first time or two) - I would NOT recommend watching the DVD and then doing the hypertune without being able to watch as you go. You will forget something.) I did not have to pause the DVD while I caught up very often, but it was easy to do when necessary.

While taking apart my mount, since I have an LXD75, some of the parts were a bit different than the LXD55 mount he was working on. That said, I found some good photos of the parts of the LXD75 laid out here: http://www.thestardeckobservatory.com/LXD75_Maintenance_101.html. That enabled me to know where there would be differences. One thing in particular that was different with my mount was that the polar scope was nearly impossible to remove, compared to his which came out much easier. I s****ed it up pretty badly when taking things apart. It still works fine though - it just doesn’t look as good. 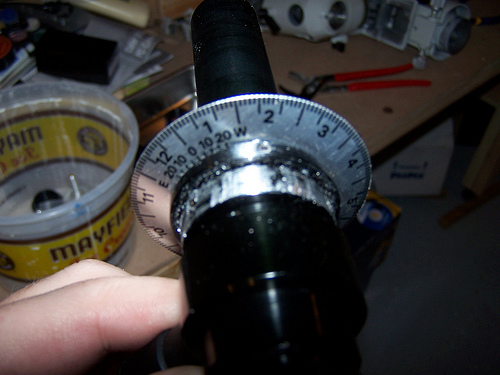 Finally, when I got everything apart, I found what wound up being the main problem with my scope. There was a tiny washer floating around in my RA gear! I suspect it was dropped in there at the factory. There also was a huge amount of the awful factory grease which was more like glue than a lubricant. 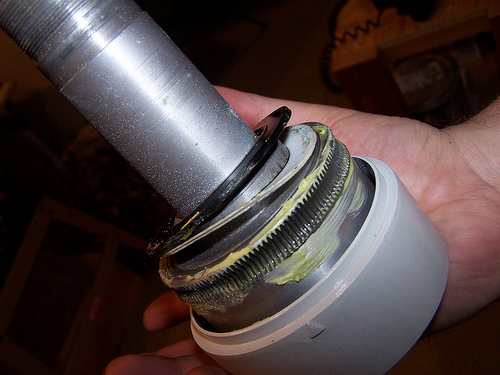 I broke the hypertuning up into two nights and after finishing the polishing, my gears were all bright and shiny: 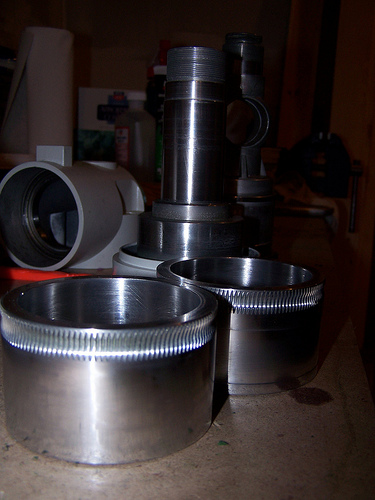 The newly smooth and shiny gears

I then put everything back together again, reassembled my mount and then, amazingly, I had clear weather the very next night! The mount worked smoothly, tracked smoothly and worked very, very well. I was pleased and have been pleased with the results over the past 2 years since I did the original hypertune. Since then, I’ve taken it apart twice and cleaned and re-greased it just to keep it in tip-top shape.

So, what’s my verdict on the DIY Hypertune DVD? I would highly recommend it to anyone who owns an LXD55 or LXD75 mount and wants to get more out of it. While I think my biggest problem was that washer floating around in the gear, I also believe that the cleaning and polishing and everything else helps keep my mount running well. I think almost more important though, is that I really understand my mount now at a very deep level. I’m able to understand what might be wrong with it if something goes wrong and I’m able to maintain it myself. If a person is "handy" at all, I think they should be able to use this great DVD. I give it two thumbs up.