This is my second review for CN and essentially an extension of my previous review on Zhumell filters published in CN late last month. First off, let me make it clear that I am by no stretch of imagination, an expert on astronomical filters. The tests I have carried out are just application of my analytical research experience, and after work hours to help understand how and why the filters behave the way they do. I own the Zhumell filters and do not have any financial interest in any of the companies I have mentioned in the review. I would like to acknowledge the help I received from following members:

Mark Liu: Sending me Baader and Thousand Oaks from New Jersey and inspiring me to extend my tests to other filters

Chris Duncan: Parting with his Televue Bandmate for testing and allowing me to take numerous peeks through his 12¡± LX200GPS ACF with 30mm Pentax XW (sweet)

Walter Knesel: For giving me his Lumicon filter and allowing me see through his 25¡± Obsession and Nagler T6 at local astronomy star parties.

Fig 1: Filters used in the review 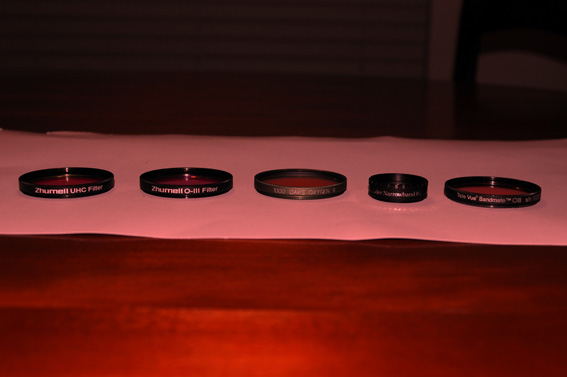 Coffee to keep me going

Forbidden lines of different atoms are generally put in parentheses to denote unstable nature. It is a spectral line emitted by atoms undergoing energy transitions not normally allowed by the selection rules of quantum mechanics. The emission lines are called forbidden because the atomic state/emission spectra are not seen/achievable in a laboratory even under conditions of extreme vacuum. Forbidden doubly ionized oxygen lines [OIII] pronounced ¡°O Three¡± should not be confused with O3 which is ozone, easily generated in a lab, during lightning, or even a home blender, and a favorite topic of our politicians stirring up many-a-heated-debates on global warming. [OIII] lines are common emission lines seen in planetary nebulae and filters which isolate these lines help see better detail in nebulae and improve contrast considerably. Discussions on other forbidden lines like Sulfur [SII], Hydrogen [H-¥á], [H-¥â], Nitrogen [NII] et cetera, which are beyond the scope of this review.

Lambda-max is the wavelength at which maximum transmission occurs. Emission spectra of planetary nebulae (that can be seen by the average backyard astronomer) shows roughly 70% transmission of major 500.7nm [OIII] line and 30% transmission of the second major line at 495.9nm. Hence while evaluating filters, the formula used for awarding points to filters was:

The filters were scanned at 1nm/sec at wavelengths 200-800 nm using Hach DR4000. The first scan was made at the center of the filter as shown in Fig 2. Four replicate scans were made 1 cm off the center and at positions shown in the first figure. The resulting spectrographs are result of 5 replicate scans each and because of excellent agreement between replicates, the spectrographs have virtually overlapped and cannot be discerned.

Field tests were carried out at Stonelick State Park, a dark site area in SW Ohio where local astronomers meet regularly. The limiting magnitude is typically 6.2-6.5 on clear nights when pointed towards zenith, North and East and about 5.8-6.0 towards West and South.

As seen in Fig 2, Thousand Oaks and Lumicon exhibited the most perfect spectral shapes. However, Lumicon had lower transmission at both [OIII] wavelengths. Baader had an excellent peak shape but the lambda-max (504 nm) was skewed to the right. Also, Baader did poorly on the second emission line at 495.9nm. Zhumell OIII peak was off target by a light year. Televue had excellent transmission at both OIII wavelengths but had a wider bandwidth and was more like a broadband UHC filter. Zhumell UHC filter did reasonably good in the spectrometer and showed decent transmission of [OIII] and [H-¥â] lines. Lumicon also transmitted a lot of visible light in the red region from 600-720nm (data not shown) with 98% transmission at 698nm. Of all the filters tested, Baader was the only filter to have no background transmission in any visible region except around 500 nm. Unfortunately, Baader did not get the peak at the right spectral region.

As seen in Table 1, Televue had highest transmission across the [OIII] emission lines followed closely by Thousand Oaks. Lumicon did fairly well considering that it was an older filter (original transmission data recorded from filter case in parentheses) but I was surprised that a boutique filter, apparently with intact coating, would lose 10% transmission specs in 5 years. Baader did okay at 500.7 but was very poor at 495.9nm.

Table 1: Transmission of forbidden [OIII] lines at 495.9 and 500.7nm. Filters ranked from top to bottom based on transmission data

A good [OIII] filter should be narrowband (~10nm) and have >90% transmission of doubly ionized oxygen emission lines. Although Televue did well with transmission, it had a broader bandwidth (more like a UHC filter) (Table 2). In that respect, Zhumell UHC did fairly well and Zhumell [OIII] was a big disappointment. Keep in mind that the bandwidth makes a difference only for the demanding astrophotographer. For visual observation, UHC filter does perfectly fine in showing details at the eyepiece.

In the field the filters behaved exactly same as in the lab. Thousand Oaks and Televue provided the best views of veil, ring and dumbbell nebulae followed closely by Lumicon and Zhumell UHC. Baader and Zhumell [OIII] filters provided improved views than without filter, but they were not in the same league as Thousand Oaks. Views of veil nebula through Thousand Oaks had to be seen to be believed, stunningly beautiful, just like long exposure photographs in glossy astronomy books. Although very little separated Thousand Oaks from Televue, at the eyepiece, I preferred the former. In all fairness to Thousand Oaks, the Televue [OIII] was indeed ¡®a great UHC¡¯ filter and should have been up against broadband line filters. Thus, Thousand Oaks [OIII] filter wins the shootout.

What filter would I buy?

Televue Bandmate and Thousand Oaks were outstanding filters and ahead of the rest of the pack by a comfortable margin. Both filters showed spectacular detail in planetary nebulae at the eyepiece, and when it mattered.

If I were to buy a filter (notwithstanding the fact that I cannot afford one any time soon) for direct viewing, I would buy the Televue for its higher transmission at both [OIII] lines and my obsession with specs. If I were an astrophotographer, I would buy the Thousand Oaks because of its narrower bandwidth and ability to generate higher contrast astrophotos. For the average astronomer with shallower pockets, the Zhumell UHC would be a very valuable/nice addition to the kit. I am not sure what to make out of Baader numbers. It had a perfect peak shape but did not have the data to back it up. I would stay away from the Zhumell [OIII] because the improvement in my case was marginal.

Enough said on forbidden lines, it¡¯s now time to eat that forbidden fruit and catch some sleep. I would appreciate your comments/suggestions.

Telescopes.com kindly agreed to replace my Zhumell OIII filter after seeing the problems I was having. The new filter have 83.69% transmission at 495.9 and 84.72% at 500.7nm with a peak at 500.6nm (close to the second [OIII] line). The bandwidth was 14 nm. I used it once on Orion nebula and have been pleased with the replacement filter.