The Zhumell SEE IT ALL Telescope Filter Set consists of four filters, a Sky-Glow filter, a UHC (Ultra High Contrast) filter, an O-III filter, and a two-piece variable polarizing filter, available in both 1.25” and 2” formats. This filter set was released about the time I made the switch from 1.25” eyepieces to 2” eyepieces and I couldn’t pass up the opportunity for a low cost set of filters. While the individual Zhumell filters are also quite well priced, the kit pricing is like getting one of the filters for free. Having obtained a larger SCT, I was also desperate for a polarizing filter for lunar observation as the 50% lunar filter I had just wasn’t enough. Shortly after purchasing the kit, I also bought the individual 1.25” polarizing filter separately to work with my smaller Ethos eyepieces.

The 2” filters come in nice screw-on plastic cases. The 1.25” polarizers come in a plastic jewel snap-open case kind of like a ring box. It’s a nice little case, but a bit difficult to get the filters back into and closed. The stacked filters tend to catch on the lip of the box when closing. 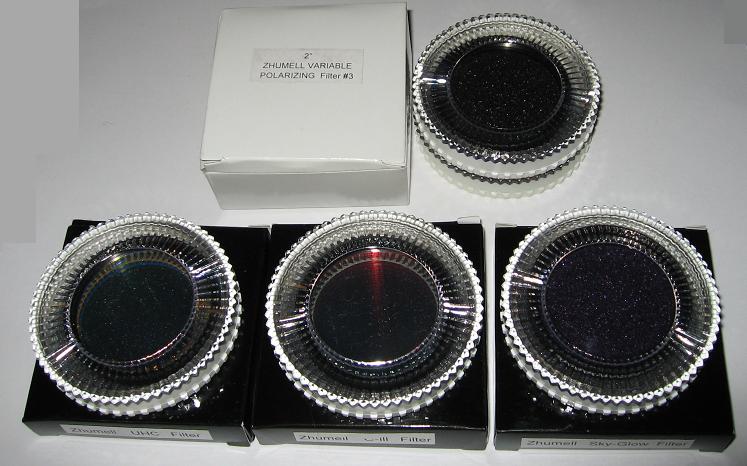 Immediately after receiving the kit I did a number of photographic comparisons to get an idea of what each filter was really doing. I had 1.25” versions of common filter types from higher end (and considerably more expensive) manufacturers like Lumicon and Televue. In an effort to ensure the same light gathering power regardless of the filter size, the images were all shot through a 1.25” T-ring adapter, while the filters were switched in and out using a Denkmeier FilterSwitch. The images were shot with a Baader filter modified Canon 450D. In general, the results speak for themselves, but I’ll attempt to fill in the gaps.

I started by comparing the filters on some nice yellow sodium vapor lamps in the parking lot behind my house. The first thing that’s obvious is that while the Zhumell Sky Glow filter does block some light, it’s not nearly as effective as the Lumicon Deep Sky filter. Given that most vendors use the same description for filters that are referred to as either Deep Sky or Sky Glow, this result was a bit disappointing. The comparison of the UHC filters and O-III filters was a bit more interesting. In general it’s apparent that there’s more light coming through the Zhumell filters as compared to the higher end filters, but at least some of that may be due to the different form factors. On the other hand, the color cast is different as well, indicating that the filters aren’t quite doing the same thing. 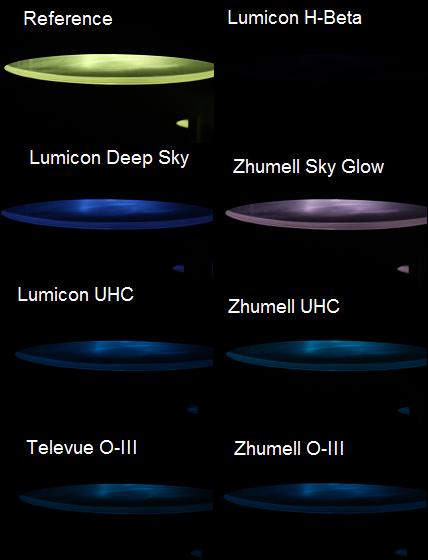 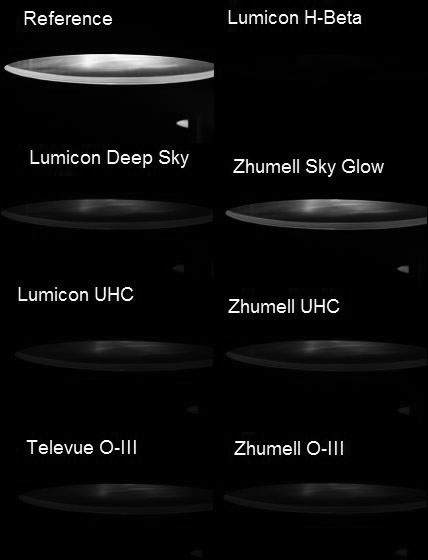 To get a better idea of what the filters are actually doing, I’d really need a spectrograph. After looking at various alternatives to try to feed a rainbow spectrum through the filters, I finally settled on a CD held in front of a 100 Watt incandescent light bulb. It certainly wasn’t ideal, but it worked well enough. Given the short distance, I had to use the focal reducer to get the image into the field of view. Since the Denkmeier reducer is after the filter in the light path, there is some difference in the amount of light making it through the 1.25” adapter. Thus, I took reference pics for both size holders to see if there was any notable difference. From this, the first thing that is again obvious is that the Sky Glow filter isn’t blocking much of anything. In general it knocks the yellows down a bit, which corresponds to the basic grey cast of the sodium lamp through the filter. At best the Sky Glow flattens the color spectrum a bit by reducing the yellow slightly. However, compared to the Deep Sky, which basically just lets the Hydrogen and Oxygen lines through, the Sky Glow is extremely weak. 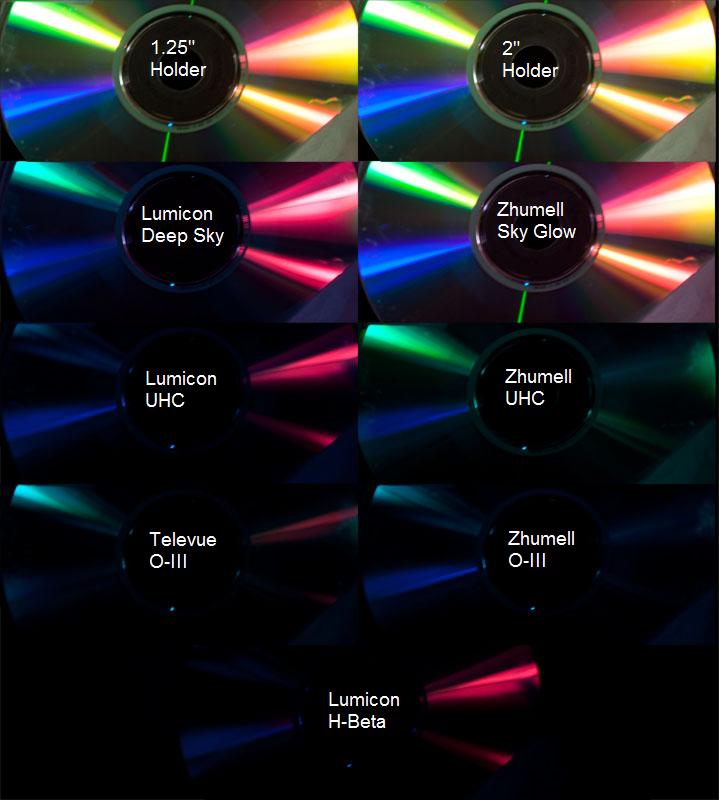 Comparing the UHC filters, it’s apparent the Zhumell lets more green through while blocking most of the desirable red light. On the O-III, it’s apparent that the two filters aren’t quite tuned to the same range, but it’s difficult to make a statement as to which one is better based on these shots. A picture of each filter outside its case gives another indication of the relative strength of each filter, and again the Sky Glow is obviously a very light filter. 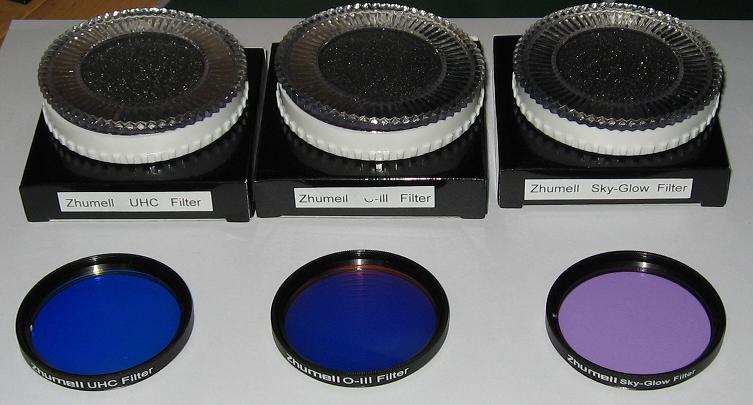 Similar pictures comparing the Sky Glow to the Deep Sky show that the Sky Glow only has one coating (pink) and not the typical two (pink/blue). 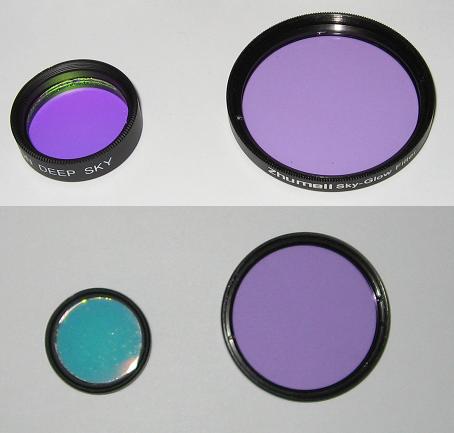 Visually, the Sky Glow just doesn’t do much for me. There’s a minor improvement in contrast, but nothing significant. I did see some advantage for lunar viewing where the filter did knock down some atmospheric glow around the moon. However, given the need for the polarizers to get the lunar strength down, stacking a third filter somewhere in the stack isn’t terribly practical. The additional internal reflections negate any additional benefit that might be gained there. On the other hand, both the UHC and O-III filter perform quite well. While I suspect the O-III doesn’t give quite the light transmission of the Televue, it definitely gives pitch black backgrounds for viewing appropriate nebulae. I never much cared for a UHC over the Deep Sky, so I don’t use it much, but it works well enough. I did go back and buy the 2” Deep Sky from Lumicon at more than the cost of this entire kit, and it’s definitely still may favorite, but the O-III stays in my FilterSwitch quite often too.

I’ve left the polarizers out of the discussion until now. While I don’t have a frame of reference for another manufacturer’s filter, these seem to work quite well. There are two different filters in each set; one with a slip ring that allows you to stack both on one eyepiece and twist the filter to adjust. That’s a nice feature, but most will want to attach one filter to their diagonal and the other to the eyepiece, allowing you to twist the eyepiece to adjust brightness rather than remove, adjust, and reinsert. I leave the 2” in the FilterSwitch and then put the other 2” or one of the 1.25” on the back of the eyepiece, giving adjustment from about 33% down to zero. This combo makes for great lunar views, although there is some notable internal reflection between the filters. It’s not really a problem unless you’re off the edge of the moon where the flare shows against the black of space. Certainly this level of filter is a must for viewing something as bright as Venus. Without the second filter, you get about a 50% reduction, and the polarization also tends to knock down atmospheric distortions. I will usually switch in the polarizer to get more contrast viewing Jupiter. Otherwise, it’s just too bright to see the bands very well. A couple of minor negatives on the filters. The 2” doesn’t screw more than about one thread into my most common eyepiece. Could be the fault of the EP, but I suspect the filter threads. Also, switching the filter in does change the focus quite a bit. Other polarizers may be similar, but I wouldn’t know.

So, in summary, while it’s not surprising that these filters don’t work quite as well as ones costing many times more, for the price, they’re still a great deal, even with the weak Sky Glow filter. Given the price, it’s like the filter is included for free anyway. Regardless, if your choice is no filter or these filters, they’re definitely worth having. Of course if money’s no object or you want the absolute best possible performance, then go for the higher end performance filters. However if you’re just looking to improve your viewing of lunar/ bright planetary and Deep Sky objects on a tight budget then these filters are definitely for you!