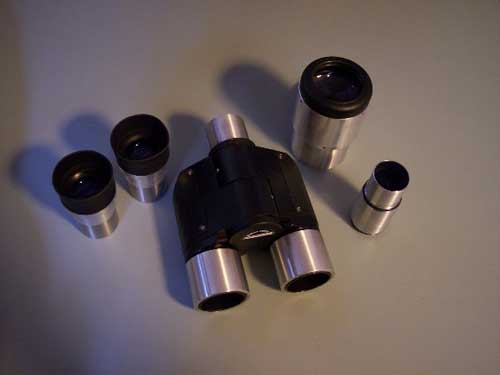 I am having a lot of fun with this binoviewer while I wait for my 45mm Elite to be finished so heres my story.

I was new to binoviewing but knew I wanted to get a good binoviewer to start out. So I got on the list for the 45mm Elite binoviewer. While I waited I purchased the 22mm dielectric. I was at first worried about the light loss but in actual use this was not an problem. In fact the images were very bright. I purchased the 1.5x - 7x Short multi magnification OCA and had 6 mag powers to work with. I use 1.5x, x2 and x3 most in my Orion 8". The setup is nice and light and is a good match for my modest dob. With the 24mm SWA eyepieces I bought with the unit I have come to really enjoy DSO's with 2 eyes.

As of the time the photos were taken my 15mm Ultra's had been borrowed by a friend but my 2" Siebert 36mm Observatory made it in the picture and will be the object of another review later.

I thought that the planets would benefit the most from binoviewers but I use them for everything now. A few months back I spent a lot of late hours looking at M13 cluster. Both eyes lets you study the cluster for a long time and see things that might not have been as quick to be seen. The Dumbbell is something I would tell everyone to look at through a pair of binoviewers. And the Orion is popping up early enough for me to see these days. Don't look at it through a binoviewer or you might have to pick yourself up from the ground.The Short OCA is low power so things like the Double cluster frame nicely.

It is so nice that for the first time I even get my wife to look through them. Unfotunately she won't do it outside. 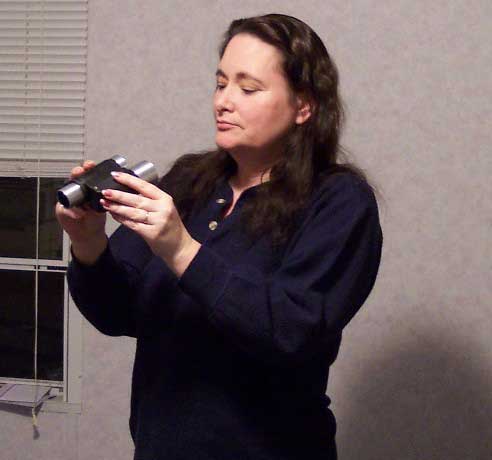 It makes made me wonder how good the Denk II and Televue binoviewers might be. I know they are more expensive but I would guess they give great views. But the 22mm Siebert Dielectric does a great job for sure. At first I was going to get a Burgess binoviewer and one of the Siebert low power OCA's while I waited for my 2" binos but after talking to Mr. Siebert I purchased his. He said a lot of personal time is put into the Black Night that is not possible for a mass produced binoviewer. The one thing that made the most difference to me was the self centering eyepiece holders. They are so much nicer then the plastic screws that some use.

I use the binoviewer on my SCT as well and do most of my planet viewing there. Mars is sometimes giving great detail and since the OCA is short I can use it in my 2" diagonal at all powers. This is nice since I can get up to 350x on Mars on a good night. So what is my over all opinion about the Siebert binoviewer? It is not the cheapest or the most expensive out there, but it is somewhere in the low middle. I think that it is were it should be. I have tried the inexpensive binoviewers and they were nice but this binoviewer is nicer in some important ways. First it did not vignette my 24mm SWA. The others did very much. With the self centering holders the collimation is always perfect which it also not always true of the lower price binoviewers with the plastic screws. I know there is more then this but this is all I can say without getting too subjective. I have had a great experience with these and knowing how good these work will make me wait patiently for the 2" binos soon to come.