This is a sort of drive system for a dobsonian from JMI. I sort of because it doesn’t provide for true tracking, but rather allows for longer views before having to recenter the object. This is definitely not for photography and the company even states this.

The product arrived in great condition, but did require a bit of assembly. There are actually three motors for this set up. Two are used for azimuth and one is used for altitude. It’s a really cleaver design and works fairly well.

The first portion to assemble is the azimuth motors. This gets mounted to the base board with three screws. The motors hang over the side and are in contact with the edge of the ground board. When the motors turn this causes the whole telescope to rotate. JMI supplies a large bushing that goes in between the base board and the ground board. This reduces the friction of the azimuth bearing allowing the motors to be able to turn the scope. Next step is to install the altitude motor. The kit comes with these metal roller bearings that attach to the rocker box. They are positioned in such a way that when the rear OTA is set on the rocker box, the altitude bearing rests on these newly installed metal rollers. Next a clutch system gets installed on one of the altitude bearings. This provides a way to control the friction on the altitude bearing as well as a way for the motor to move the scopes altitude. 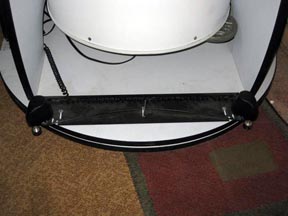 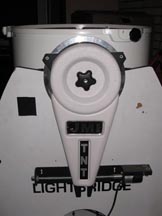 The motors are powered by a supplied 12V battery which easily fixes to the inside of the rocker box. This keeps the battery secure and out of the way. The motors are all controlled by a hand controller that can attach to the front of the scope near the focuser. There are 2 speed knobs and four buttons on the controller. One of the knobs controls the azimuth, both left and right, and the other knob controls elevation, up and down. Then more the knob is turned the faster it goes in that direction. So depending on the section of sky you are looking at you will have to adjust these knobs to get the speed and direction of the scope to match up with the objects speed and direction. The buttons are used to move the scope in a certain direction at high speed. This allows you to recenter the object without having to mess with the dials. 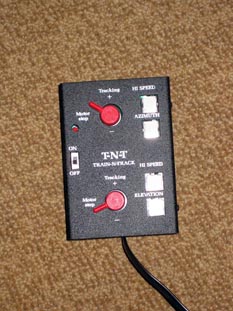 The unit functions as advertised, but sometimes takes some work to get the scope to track. It’s real handy when you have several people observing and you are not constantly recentering the object. Although I do like the tracking feature, I found that I use the buttons more often for moving the objects around the field of view. The other nice thing about this setup is that you don’t have to release the clutch if you want to manually move the scope; you just grab the end and move as usual. I find that the knobs are not as sensitive or consistent as I would like to see. I don’t always get the same response when turning the knobs. Sometimes a small turn causes the motors to turn faster than a previous large turn and vice versa.

I have used this system for a few months now and although I like it, I find that I don’t use it as much as I thought I would. Most of the time I manually move the scope and then just use the buttons to keep the object centered. One of the other issues is that the rubber sleeves on the azimuth motors seem to wear out fast. Mine are already showing damage just after 4 uses. Other than this the unit functions well and is a good upgrade especially when you have lots of people viewing.