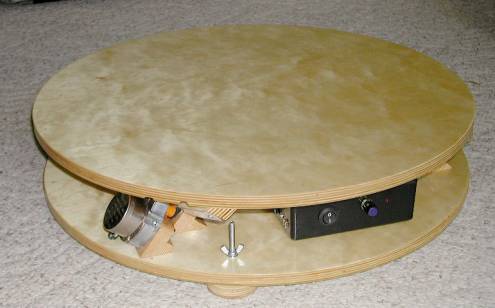 As an unrepentant star hopper I love using my Dobsonian scopes to "hunt down" the faint patches of light we know as galaxies, nebulae and star clusters. I've been doing so for the past 3-4 years and have located and observed over 2000 deep sky objects. I own a couple of small refractors, a nice 8" GOTO SCT and a couple pairs of binoculars. I find uses for them all but for the most part, any serious observing has been done with my 10" Orion Skyquest dob and, more recently, my 16" Meade Starfinder.

Usually I am too busy star hopping with the help of computer generated charts to worry about tracking. I move from one object to another and have no trouble keeping objects in the field of view even at fairly high magnification. There are times, however, when I simply want to gaze at some of our most stunning heavenly treats such as Jupiter, Saturn, Luna or many of the brighter, more spectacular Messiers and Caldwells. There also times when trying to locate an especially faint galaxy or nebula that I would just like to forget about hand tracking and concentrate on picking up a glimpse of my quarry. Then, of course, there are star parties, formal and informal, where moving the scope between "customers" is a bit of a pain.

Mounting either of my Newtonian OTA's on an equatorial mount would be expensive and make transportation to a dark site very difficult. It would also make star hopping less than fun (at least in my experience).

The obvious solution would be an equatorial platform. These are relatively easy to transport and align, and they also allow star hopping in that good old fashion Dobsonian manner. However, some of the platforms are very expensive, especially if made for a large, heavy scope like the Meade. Stock Meade Starfinders weigh about 170 pounds and mine, with a modified base weighs about 130. The Type V Johnsonian can handle up to 180 pounds but costs about $1000. Tom Osypowski's platforms for that size run from $1325 up.

Recently I noticed a new company called Round Table Platforms offering platforms made by its owner Brian Reed. I read up on them, liked the price (less than $400 for the 23" model, plus shipping) and saw that Brian had been contributing to Cloudy Nights and Yahoo groups for a few years, seemed thoughtful, and communicated in a straightforward and apparently honest manner, to I decided to give it a try. Brian offers two sizes of platform: 23" for scopes up to 14 inches and 30" for 15-16 inch scopes.

The following is from Brian's add:

Each platform is custom cut to your latitude and is constructed from 5/8 inch Baltic Birch with adjustable pads for leveling or latitude adjustment. The leveling pads fully extended to allow for + or - 5 degree latitude adjustment or 700 mile adjustment range. The platform will add 5 ? inches to the height of the scope. It is 23 inches in diameter, weighs 17lb, and tracks for approximately 50 minutes. It is powered by 8 AA batteries, and also comes with a detachable 12V automotive plug. It has fine speed adjustment with blinking LED speed indicator. An automatic shutoff switch stops the table when it reaches the end of its travel. Reset by simply lifting the corner of the platform and slide the table over. The scope can either be set on top of the platform or directly attached replacing the ground board. The Round Table Platform can easily handle up to a 14-inch scope. For a 15 or 16-inch scope, I would need to make the platform slightly larger and add support for stability. (there is a slight extra charge for the bigger platform). It cannot be used for guided photography, but will work for short exposures.

This picture and the one at the top of the page are from Brian's ad (included with Brian's permission):

The two "chips" on the upper right are there on purpose to make sure the platform clears the motor housing. My larger platform looks identical but has only one "chip".

My platform arrived about four weeks after it was ordered. When Brian noticed that he would miss his promised delivery date by a few days he promptly notified me. Communication with Brian has been easy as he is responsive and accessible.

Below are pictures of the "innards" of my platform: 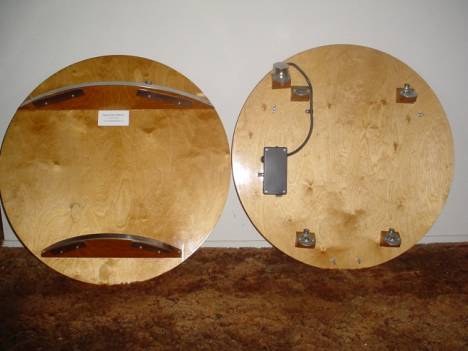 The platform weighs in at about 29 pounds (remember this is the 30" version) and stands about 5 ?" from the ground when assembled. 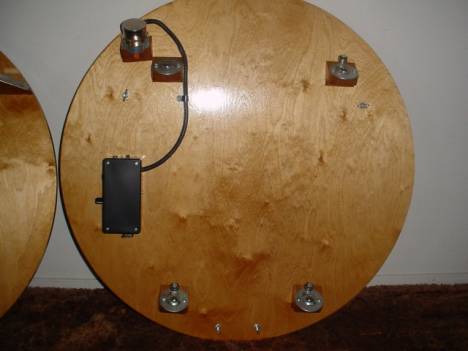 Note the ball bearings in the next to three of the roller bearings and next to the drive wheel. These take most of the weight of the scope.

In order to test the unit I put my large scope directly on the top board using a piece of material designed to make shelves non-slip (sometimes called Gripliner). I can report that there was no tendency for the scope to tip even when I was resetting the platform at the end of its 50-minute run. The resetting was fairly easy to accomplish and didn't take any great strength or technique. I simply grasped the front of the platform's top board, lifted slightly, and swung it back to the starting position. There was no need to lift the weight of the scope completely off the bearings.

Vibration recovery time after moving the scope is a bit longer when using the platform (about 2 seconds). It is also more vulnerable to the wind. It is no worse though, and probably better than it would be on any German EQ mount that could be purchased without a second mortgage. The OTA alone weighs 100 pounds. Once the scope has stopped wiggling it rides smoothly with no vibration.

Here is a picture of my scope on the platform: 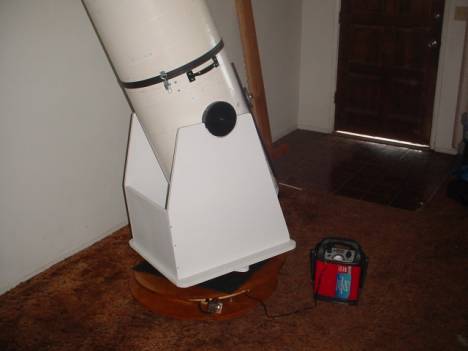 Although the platform tracks smoothly now, at first I noticed a bit of a problem - the tracking was uneven and jerky. A quick inspection revealed that the rubber cover of the drive wheel was being squashed a bit by the weight of the scope and was rubbing against the shaft bushing. After an email consultation with Brian I simply loosened the set screw and moved the roller about 1/32" away from the bushing ? end of problem. Then I noticed that the bearing surface was very close to the bushing and could have been rubbing. Again following Brian's advice I filed a bit of the bushing away to give extra clearance. After that the platform worked perfectly with no vibration and with steady movement.

Here is Brian's picture (included with his permission) of the drive components (my metal runner was much closer to the bushing): 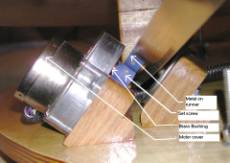 The speed is controlled with knob on the control box bolted to the baseboard. The on/off switch is also there. The motor is powered either by eight AA batteries or with an external source using the supplied power cord. A switch needs to be set to indicate which power source is in use. A switch mounted on top of the control box shuts off the platform at the end of its run.

Finish is excellent and the platform is quite attractive, (very substantially more so than my old Meade dob). The owner of a premium scope will not be disappointed with this platform's appearance. As the add states the platform can be had in clear finish, stain, painted or unfinished. There is a $40 charge for painting the platform black.

1. Very well made and nicely finished.
2. Easy to set up, operate and reset.
3. Very sturdy design - not adversely affected by 130 pounds of scope.
4. Very low price for a well made platform.
5. Excellent support and communication from builder.
6. Scope ride securely with no tendency to tip.
7. Can use either internal or external batteries.
8. Scope can be placed directly on the platform or the top board of the platform can be easily modified to replace the ground board of the scope.

1. Speed control is a bit hard to reach ? a remote would be more convenient.
2. Not adjustable for latitude like some more expensive designs.
3. I would like to see some sort of mark or guide for polar aligning with a compass.
4. Longer vibration recovery time when using platform.

After putting in about 15 hours using it over several nights, I can say this platform seems to do everything I expected of it and do it in a convenient and practical fashion. Appearance, workmanship and structural strength are better than I had hoped. Brian is responsive and helpful. He seems perfectly willing to do any rework or replace any part that is not right when the platform is received. Except for the polar alignment guide my "con" list is really made up of things that would be unreasonable to expect of such a low priced platform. The longer recovery time may be inherent in this type of platform. All in all I'm very pleased with my new platform and can recommend this equipment and its craftsman to anyone looking for a good deal in a very functional EQ platform.

After getting feedback on the forum and using the platform for a few more hours I wanted to clear up some possible questions and an error.

2) In the review I stated that a "con" of the Round Table Platform was that it could not be adjusted for latitude, when in fact the platform can be adjusted for plus or minus 5 degrees latitude by using the leveling screws. This was stated early in the review when I quoted Brian's blurb and when I stated it as a con I was thinking about larger adjustments that can be made in at least one competitor's model. However, it came across as misinformation and I wanted to clear that up.

3) I'm still very happy with the platform and already getting spoiled by the tracking capability.