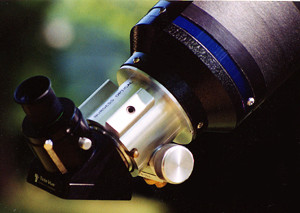 This review is regarding the Burgess 200A focuser I had purchased for my 6" Skywatcher refractor. This unit is machined out of solid aircraft grade aluminum. The focus knobs are also made out of this aluminum and are 1.5" in diameter. One rotation of the focus knob equal .75" of draw tube travel. It weighs 2.3 lbs. and has about 2" extra inward travel as compared to my stock almost 2 lb. Synta focuser.

At full extension the distance with Model 200A's drawtube tops out at 9 11/16". The stock Synta is 10 1/8". This allowed any eyepiece I own to easily reach focus, even when used in concert with the Sirius Optics VFS Variable Filter System which requires a lot of inward focus travel. The drawtube on Burgess Model 200A is about a 1/8" thick.

The Model 200A is a Crayford type. There are 3 main points of bearing contact on the drawtube. On the bottom of the focuser are 2 brass adjustment knobs assembled one on top of the other. The large one adjusts for draw tube friction and the smaller one adjusts for the focuser's feel. I think this is similar, but not the exactly the same as the Synta's bottoms 4 screws/plate which adjusts for feel and the top knurled set screw which adjusts for overall friction and somewhat "freezes" the drawtube's alignment.

Additionally, it's modular construction with various adapter plates and drawtubes can mate this focuser to different telescopes. 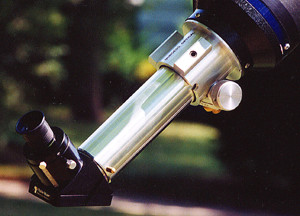 The Burgess Optical Model 200A I ordered came with a collimateable adapter plate which simply inserts where the stock Synta focuser was without any modification. I am rather freakish about collimation. I have a laser collimator and made an accurate target to show an accurately centered spot surrounded by concentric circles that are 5 mm. apart. I taped this inside my lens cap that has a 119 mm. aperture that is covered with a removable cap.

I spun this target mount around and adjusted it till the center spot didn't move. At this point, I collimated as usual. What struck me was that the laser's spot on the target was inside the central 5 mm. diameter circle from just by initially inserting the focuser. This was followed by a very minimal amount of adjustment to achieve spot on collimation. The circular adapter plate that attaches the Burgess focuser the scope has 3 tiny black hex "push" screws that aided me in achieving the finer adjustment for collimation.

I also use a Chromacor II with its own special requirements regarding collimation. If the Chromacor is off center by a small amount, I can see coma-like images as a result. This was dealt with by making a new nose ring and using a small amount of scotch tape as a shim to center the Chromacor with the optical axis. The inside diameter of the narrower portion of the Burgess Optical's Model 200A drawtube is 1.94".

The portion of the drawtube that accepts a 2" diagonal is a little larger in diameter and has a small ledge-like separation leading to the smaller inside diameter. There is a machined brass setscrew cap knob that holds a nonmarring nylon set screw to accept a 2" star diagonal or a 2" to 1.25" adapter. I was very surprised that by using this setscrew to engage my Tele Vue diagonal resulted in such a rock solid grip. The visual back that came with the stock Synta focuser with its 2 setscrews is very sloppy in comparison since the diagonal could be flexed or got bumped out of alignment quite easily.

In the accompanying photos you can see The Model 200A's no-nonsense construction. What the photos don't show are how close the tolerances are regarding the fit of the parts. You can also see a white ring that I made that sits between the forward face of the diagonal and the end of the drawtube.

This 4 mm. thick collar is not a necessity, but I installed it so I would have a precise contact between the drawtube's setscrew position relative to the star diagonal's safety cut. 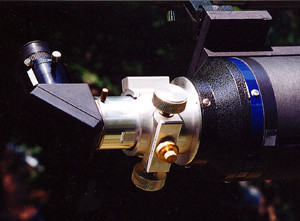 Adjustment of the Burgess focuser's feel requires an "extremely" small amount of rotation of the smaller brass knob to make changes in the focuser's feel. I did not have to adjust the larger knob for the focuser's to adjust friction at all. This simple to execute adjustment inspired a lot of confidence in regard to this focuser's built-in precision.

I know that Burgess Optical offers a more advanced model with an outrageous 500:1 ratio belt driven fine focus knob. I chose the model without a fine focus mechanism. The reason was because of cost, and since I don't image, I didn't feel the need to have that option.

This is one heavy-duty focuser. I have it adjusted for a very light touch. Even adjusted like this, heavy eyepieces did not induce any slippage, flexure or shift on the focuser. This was confirmed when observing with 35 mm. and 27 mm. Panoptic eyepieces, and then switching to lightweight high power Orthoscopics, with the scope pointed at zenith and then toward the horizon.

The smoothness and sureness of a focuser like this really made itself apparent during lunar observing. I have found that the curvature of the Moon's surface had me always tweaking my focuser. When sky conditions are good, I usually observe the Moon at magnifications that range between 350x - 560x and if there is that rare time when the air is very still, up to 700x. Any focusing adjustments that have to be made at these high magnifications are sure and precise. After using the Model 200A for a time, I hardly ever overshot critical focus. I mount my refractor on the light duty CG5 mount as a trade off for a physically manageable sized mount. The Model 200A focuser helps cut the focusing jitters while using this mount since it is so smooth and requires a very little finger grip pressure.

Even though comparing differently designed mechanisms can at times be stretched too far; to compare the Model 200A to other high quality focusers can be done. I have used the Feather Touch, Tak, Tele Vue, JMI and Astro Physics focusers that are installed on other people's scopes. Mechanical design differences aside, they are all very good and somewhat different in feel. I think that the Burgess focuser is right up there with the best in comparison to any high-end focuser. The Burgess Model 200A doesn't have a "feel" that fits in with the adjectives that I have heard other folks use for describing these other fine focusers. For example, words like buttery, silky, etc. The tactile feel of the Model 200A simply comes down to this - Very light fingertip pressure and it is very precise. As far as its construction, fit and finish goes, the Model 200A has a no-nonsense sate of the art simplicity and is totally overbuilt. When I had adjusted it to my liking, I found that no other readjustment was necessary even when switching a 15 mm. Plossl for a 27 mm. Panoptic. The only real difference I found between some of the aforementioned high-end focusers and the Burgess Optical Model 200A is that the Burgess doesn't has that small whoosh of air that some focusers have when the drawtube moves in and out.

Aesthetically, I really do like how heavy-duty the individual parts are. Additionally, it does not appear to be over-engineered.

I thought I would include a brief comment about dealing with Bill Burgess. Bill is a great, personable guy and really knows his stuff.

E-mail address and phone number can be found at www.burgessoptical.com