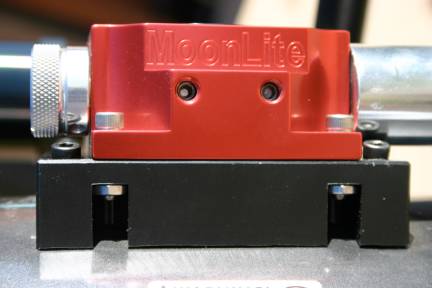 I recently purchased a Moonlite CR1 crayford style focuser with the motorfocus option. I have been wanting to upgrade the Synta R&P focuser on my Orion SVP 8" for some time, and now that I am doing lots of imaging with a Canon DSLR it became even more important since the stock focuser would not reach focus with a 2" to "T" adapter. This meant that I was finding and framing my targets with a parfocal eyepiece then unscrewing the visual top from the drawtube and screwing on the "T" adapter top with the Canon T ring then attaching the camera to the T ring. Besides being a very unhandy process it also meant I had to loosen the tiny set screws on the T ring to rotate the camera if I wanted a different orientation. The whole process was frustrating and greatly increased the chances of something going wrong ? bumping the scope, changing focus, etc. Also with a fast (f 4.9) scope very small changes in focus were difficult to make manually with the imprecise R&P focuser.

After reading many reviews and forum threads on Cloudy Nights as well as looking at manufacturers websites and trying one on a friend's Dob I decided that the Moonlite CR1 was the focuser for me. It is affordable, looks nice, is low profile enough to reach focus with my DSLR and 2" to T adapter, and is available with an adapter that allows it to fit the existing mounting holes on my Orion scope. It is also available with a motorfocus option and according to Moonlite's website a PC based controller will soon be available. I thought the motorfocus option might be good for fine focusing with the DSLR. I was a little worried by the fact that manual focusing is no longer possible with the motor option installed, but I decided to give it a try.

I ordered the focuser, large format adapter kit, and motorfocus option on Moonlite's website and had the unit 3 days later. Upon initial examination I was very impressed with the appearance and build quality of the focuser. Installation was very easy. The instructions are only a single page and not extremely detailed, but focuser installation is not that difficult a task. I installed the focuser using only the adapter that fit the existing holes on my scope and did not use the 1" spacer included with the Orion mounting kit that is intended to make the racked in height the same as the original since I needed more in travel with the camera and 2" to T adapter. Instead I purchased 1.25" and 2" extension tubes (like a Barlow with no lenses) to allow me to reach focus with my eyepieces. Once I had the focuser installed I was anxious to see how I was going to like the motorized focusing. In short, I really like it! The Rigel Systems nFOCUS controller is VERY adjustable and best of all if you are moving the focuser at low speed you can instantly switch to the pre-set high speed by pressing the opposite direction button. As soon as you release the other button it goes right back to low speed. This allows the user to set the low speed such that fine focus can easily be achieved and still have access to a high speed to get you close without having to reset anything. The high speed is fast enough and controllable enough that you can quickly and easily achieve rough focus then use the low speed to fine tune it. The low speed setting can range anywhere from just slightly slower than high speed to a setting so slow you have to watch the drawtube for several seconds to detect any movement. To be honest, I have only focused visually a couple of times with the focuser when re-setting my parfocal eyepieces to match the camera/Moonlite combo, but it was no more difficult or slower than manual focusing and it is MUCH easier to achieve "perfect" focus with the camera using the low speed mode than it was with the original focuser. I could detect no motion or shift in the image, but I was using a low magnification eyepiece. Since I am using a software focusing routine to achieve focus the motorized focusing option has the added benefit of allowing me to remain seated at the laptop while I adjust focus with the controller and check the results on screen as opposed to standing up, adjusting focus manually, turning to the laptop screen, triggering a focusing exposure, checking the results, turning back to the focuser, adjusting again and repeating the entire process until I have "perfect" focus. The controller is also much more consistent and repeatable than fingers. You can actually hear the motor pulses (although they are very quiet in low speed mode) and if you move the focuser either direction by a number of pulses you can go back the same number of pulses and you will find focus to be the same as it was before you changed it. 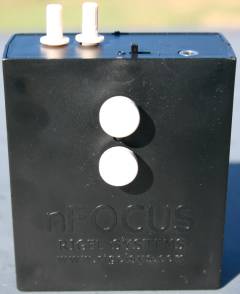 Nothing is perfect, of course. I wish the large format adapter was lower profile so I could have a little extra in-travel for certain accessories and most of all I wish the compression ring drawtube option didn't add 3/8" to the racked in height because I had to do without the compression ring option to be able to reach focus with my particular 2" to T adapter. I think the adapter could be shortened by 1/8" or possibly even ?" by milling the curved side and ?" might give me room for the compression ring option, so I may try this in the future. The adapter to scope mounting screws (and nuts) are stainless and while stainless has advantages I think I would prefer black oxide for screws and nuts that protrude into the telescope tube. I replaced the included screws with black oxide. I also added some large diameter washers to minimize "dimpling" of the tube. The inside of the drawtube is also very shiny black anodized and will probably need flocking, but the finish on the outside of the drawtube probably contributes to the smoothness of the focuser and it would be pretty difficult to put different finishes on the outside and inside of the tube so I can see why they would leave it to the user to flock or otherwise modify the inside of the drawtube. These are all really minor issues and don't detract from the many advantages. So far I have not encountered any usability or mechanical issues with the focuser, but I have only used it for a couple of imaging sessions so far.

I am quite happy with my new focuser and feel that it was money well spent. It has already improved my imaging not to mention making the entire experience much more relaxing and enjoyable. I would certainly recommend the Moonlite focuser to anyone who wants a very nice, affordable upgrade to their stock focuser and would also recommend the motorfocus option to anyone using the focuser primarily for imaging. If you were using it primarily for visual work you might sometimes wish you could just grab the knob and focus, especially if you have eyepieces that are not very close to parfocal, but with the ease of switching between high speed and low speed modes without having to change any controller settings I think the motorfocus option would even be good for a visual user.