Focusing accurately while taking astrophotographs is one of the most tedious and difficult things to do consistently.  Using a motorized focuser is almost a necessity.  Finding a motorized focuser that will work with all three of my refractors became difficult because I need to be able to use each scope both with and without a focal reducer.   Each focal reducer is designed to be placed a specific distance from the imaging chip for best results.  The focuser can not be between the reducer and the camera if this vital spacing is to be maintained.  Another issue is the total length of the imaging train.  If the focuser and reducer combination are too long, then the scope won’t come to focus at all. In addition to these difficulties each of the scopes has a different requirement for attaching the camera.  My TMB 152 has a 3.5” feather touch focuser with an Astro-Physics threaded drawtube.  My Takahashi TSA102 uses the original Takahashi 2.7” threaded drawtube and the Feather Touch micro focuser.  The third scope has a standard 2 inch Feather Touch focuser and drawtube.  It becomes very expensive if you have to buy different focuser adapters for each of the scopes.

After looking at quite a few options, I decided to purchase the Starizona Micro Touch Focus system.  The Starizona Micro Touch systems costs about $400.00 and includes the controller, PC Software, standard size focus motor and all necessary cables.  The Starizona Micro Touch system uses motors that are manufactured by Starlight Instruments which is the manufacturer of Feather Touch focusers.  This system is a great solution for me because it is designed to fit the Feather Touch focusers on each of my three refractors.   I purchased 1 additional standard motor (about $220.00 plus shipping) and 1 additional “large” motor for the 3.5” Focuser (about $250.00 plus shipping).  With this system, each motor attaches directly to the existing Feather Touch focuser without needing any special adapters.  The system does not add any length to the imaging train and allows me to focus with any combination of refractor and focal reducer.  The Micro Touch focuser system uses internal software that is ASCOM compliant.  ASCOM is a specification for communication between the computer, focuser and telescope.  Making the system ASCOM compliant allows it to work with many other astronomical software packages that are also ASCOM compliant.  The system comes with FocusMax software which works with the imaging capture software like CCDSoft and MaxIm DL/CCD but as of this writing, it does not work with AstroArt. I am using the system with CCDSoft.   FocusMax is freeware and will work with any ASCOM compatible focuser.  If you are interested in how it works, you should read the paper entitled Fast Auto-Focus Method and Software for CCD-based Telescopes By Larry Weber and Steve Brady. 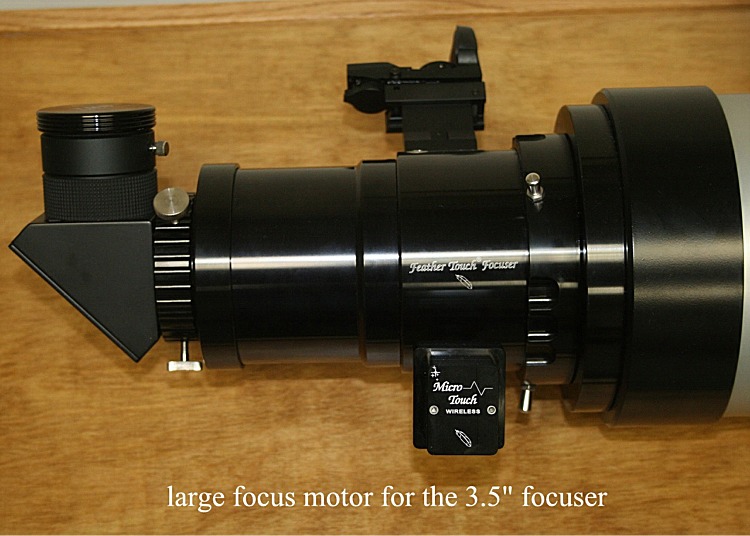 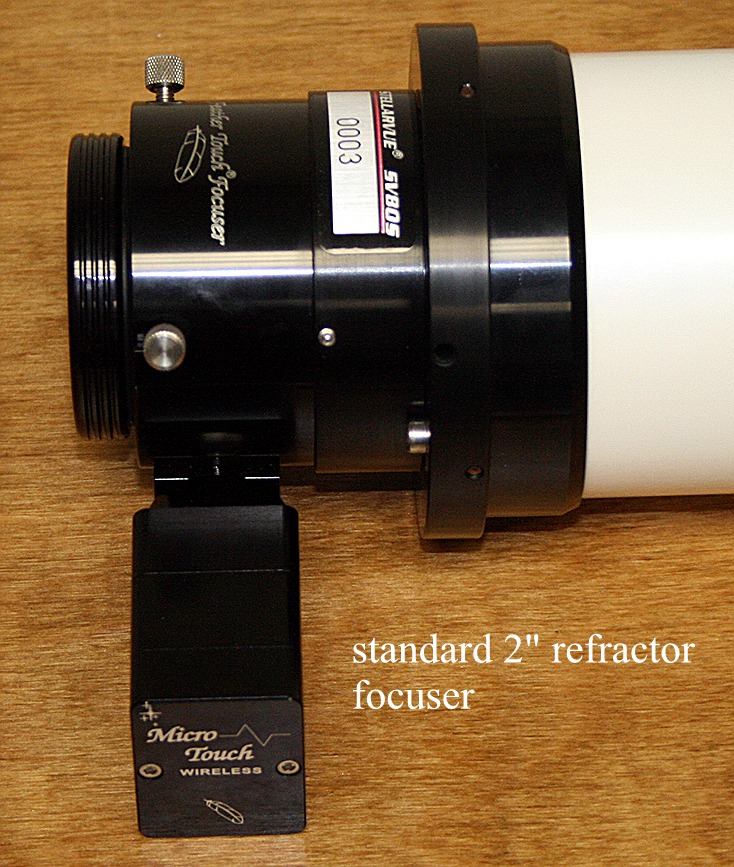 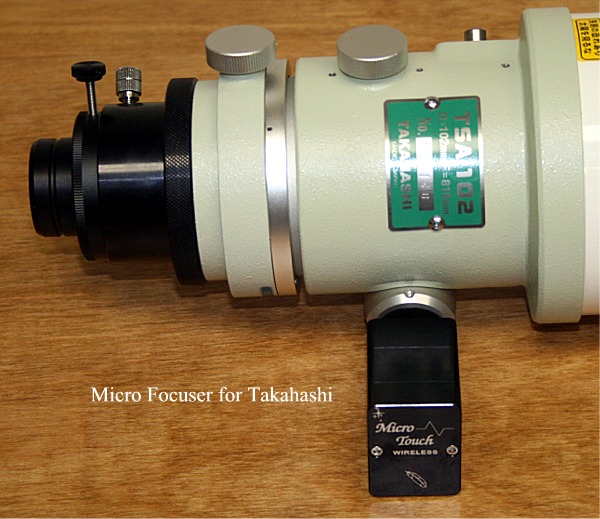 There is also a procedure for characterizing the scope to determine the thermal linear expansion coefficient of the telescope.  In simple terms this is a measure of the amount of focus change due to the change in the ambient air temperature.  The Micro Touch focus system has a built in temperature compensation feature that can change the focus position to compensate for the change in temperature.  I have not taken the time yet to implement the temperature compensation feature because it is so easy just to refocus after the temperature changes a couple of degrees.  I also found that my color filters aren't exactly par-focal when used with my refractors so I refocus each time I change to a different color filter.

Installation of the Micro Touch Focuser system is very simple.  The original focuser knob is removed using the supplied hex wrench and a small gear is attached to the fine focus shaft of the focuser.  The Micro Touch motor slips onto the focuser where the original focus knobs were and attaches with a clamp on the motor housing that is tightened by a single hex screw.  The whole procedure takes about a minute to perform.  I had one small issue with the motor attached to the 3.5 inch Feather Touch focuser.  The gears didn’t mesh very well and at some points in the focuser travel the gears would actually slip.  I made a phone call to Starizona about the problem and they seemed very surprised that I was having a problem with the focus motor and said they had never seen this issue before.  After the person at Starizona made sure I had installed the motor and gear on the focuser shaft correctly, I was instructed to place a business card shim inside the focuser motor housing to force the gears to mesh more tightly.  I was also instructed to slightly trim the edge of the electrical connector with a file or sandpaper to allow the motor to move just a little farther when the shim is in place (see pictures below).  The person at Starizona offered to make the adjustment for me free of charge but also gave me the option to do it myself while he walked me through the procedure on the phone.  After placing the shim inside the motor casing and trimming the edge of the electrical connector with a file to allow more clearance (see pictures below), I had no more problems.  I was very happy with the support I received from Starizona and was happy that I didn't have to send the motor back in order to fix the problem. 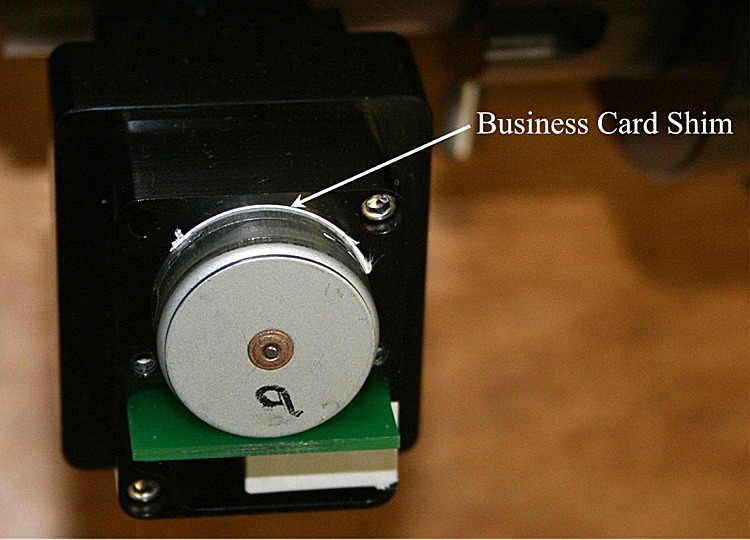 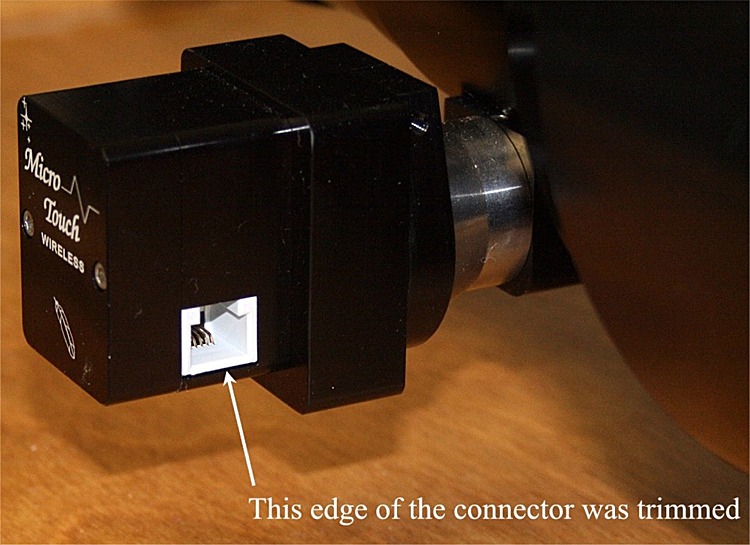 I also had an issue with the Feather Touch micro for Takahashi.  When I tested the focus motor, I would extend the focuser out to its most extended position.  I then commanded the Micro Touch system to return to the zero position.  It was obvious that there was something slipping because even though the focus controller said the focuser was in the zero position, there was still some inward travel left on the telescope focuser.  The problem turned out to be a slightly loose setscrew on the Feather Touch micro that was allowing the shaft holding the pinion gear to slip (see picture below) and not a problem with the Micro Touch system itself.  As soon as I tightened the setscrew shown in the picture below, the focuser would return to the zero position consistently. 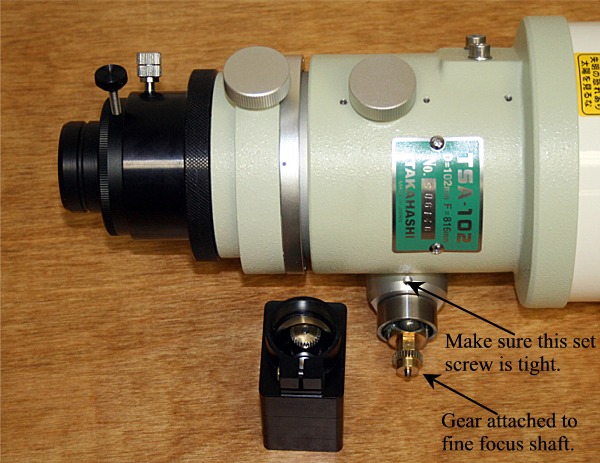 After the initial setup and scope characterization, the Micro Touch focuser is a joy to use.  FocusMax is able to complete a focus run in 1 minute or less.  I usually refocus any time the temperature changes more than 2-3 degrees and also refocus any time I change filters.  The resulting focus is consistently as good as or better than I could achieve manually.

Here is an example of a Hydrogen Alpha image captured with the Takahashi TSA102 and focused with the MicroTouch Focuser System. 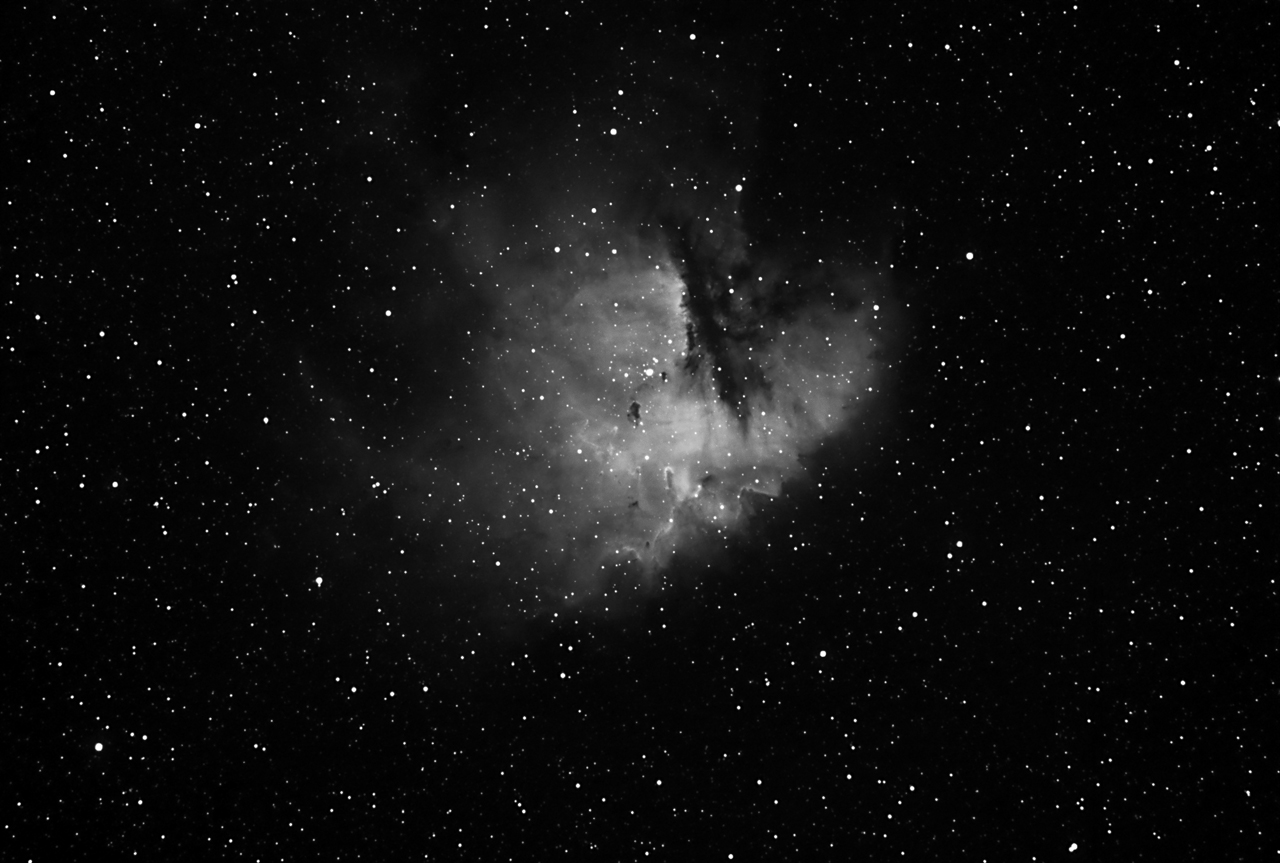 Here is an example of an image captured with the TMB 152 and focused with the MicroTouch Focuser System. 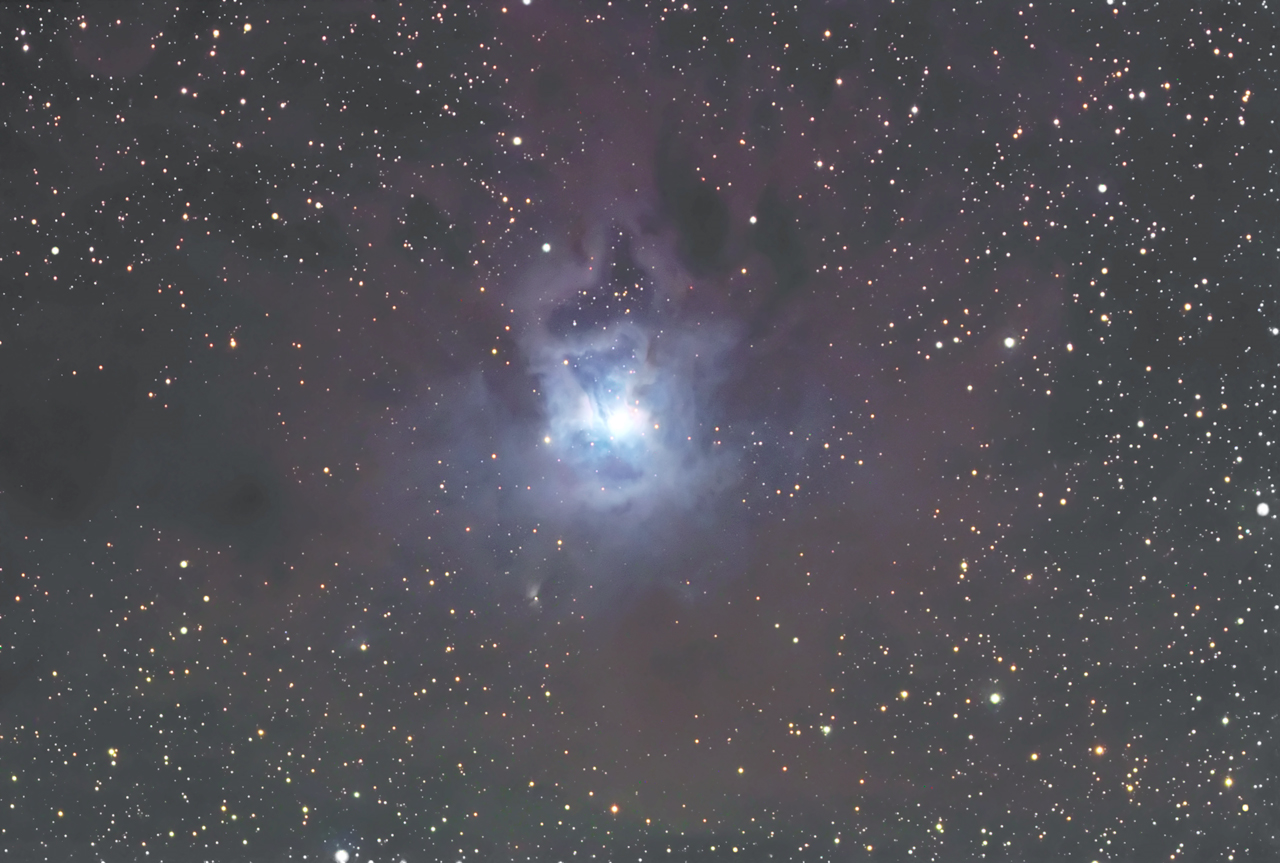 Overall I am very please with the results.

Like any product, there are a few small issues with the Micro Touch focuser system.  If you wish to manually focus you must use the hand controller that comes with the setup and have a 12V battery source.  The hand controller is quite a bit larger than a standard desktop computer mouse which is OK for auto-focusing but a bit cumbersome for manual focusing by hand.  This system is optimized for auto-focusing during astroimaging so it is somewhat slow and cumbersome for visual use. 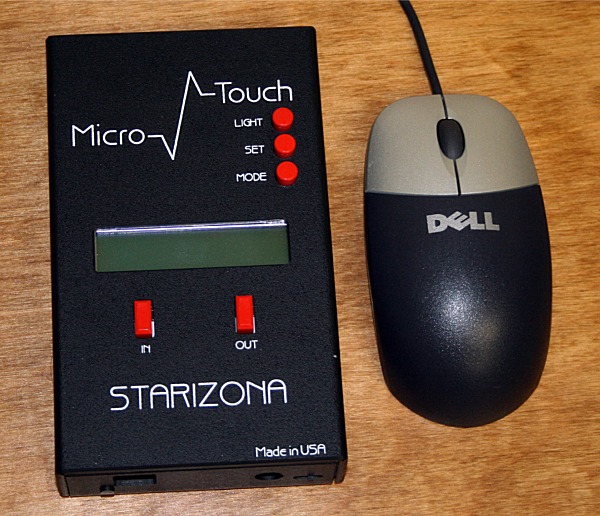 You can not use the focus knobs while the motor is attached to the scope so if you want to use the original focus knobs, you have to remove the focus motor and re-attach the knob. The good news is this takes less than a minute and all necessary tools (hex wrenches) are included.  I would also be helpful if there was a way to control two focus motors with one controller.  While taking astro-photos, I use one of the refractors for guiding and one for imaging.  It would be nice to be able to auto-focus both scopes.

I live about 20 miles north of Indianapolis Indiana. I have been interested in Amateur Astronomy for about 10 years and interested in Astrophotography for about 8 years. I currently own just two telescopes but I have owned 8-10 scopes in the last 8 years.