I share with you my initial experience with using the digital Motorized Focus Control System made by Starlight Instruments for the Feather Touch 3545 focuser.

Briefly summarized, the Starlight is first class quality (what else would you expect from Werner), quite usable (but not without some misgivings), and a very worthy alternative to other solutions that are both more and less expensive. There are some problems and unexpected “gotcha” you should work out first before you decide on this or any other brand of a motorized focuser.

My goal was to achieve a finer degree of focus control for imaging than the 3545 was able to provide manually on my TEC 140. The 3545 is superb for visual use. It is much more difficult to come to a tight focus with high magnification and narrow FOV in planetary CCD imaging because the scope shakes ever so slightly when touching the focuser. Simultaneously racking the focuser and looking at the computer screen requires capabilities that nature didn’t assign to humans. 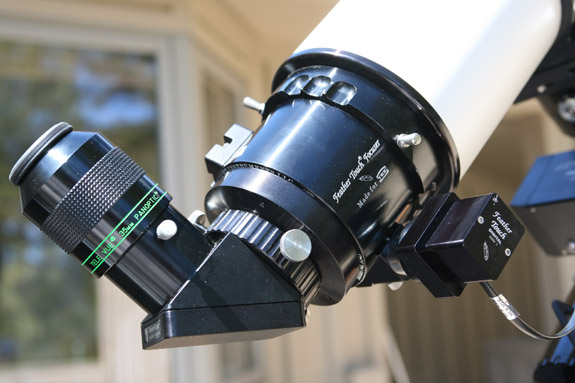 I have never owned or operated a motorized focuser that was not already built into a scope. Options I seriously considered included systems directly driving the focuser (including Robofocus), or using a second focuser that was motorized (Meade, Optec, etc.) inline with the 3545. I bought the Starlight system (thank you Dan F.) for a variety of reasons.

The system price is roughly similar to the products from RoboFocus and MoonLite. That means it isn't cheap.

THE MOTORIZED SYSTEM AND CONTROL

The system has three main components, including: a digital stepping motor that attaches to the focuser; a hub that serves as the "brains"; and an optional hand controller for manual (non-computerized) control. A temperature probe is also an option that I do not have. The hub serves as the central communication and connection point, and uses an RS-232 serial interface to your computer.

Flat 6 and 8 conductor wire with modular plugs connect between the components. The standard wire and connectors allow alternate lengths of cable customized to the user’s setup using solutions off the shelf or user made.

This modular system is very appealing if you have more than one telescope with FeatherTouch motorized focusers. The control hub and hand controller can be shared with all of the scopes, provided only one is in use at a time.

When a button is continuously depressed the motor is driven in 5 stages of speed that sequence slow to fast over about a 5 second period of time. At full speed the rack moves at a rate of about 1 cm per 6-7 seconds, and will take close to 80 seconds to move the full range of the focuser. Note that when the rack reaches full in/out, the motor will continue to run but this does not harm the motor or focuser.

The motor (a 2" x 2" x 2" cube) and small concealed spur gear mount to the end of the fine focus pinion shaft without ugly brackets or belts (note: you now lose all ability to manually focus). The motor replaces the coarse and fine focus knobs. Installation was quick and easy, and in 5 minutes I was in business with non-computerized focus control. 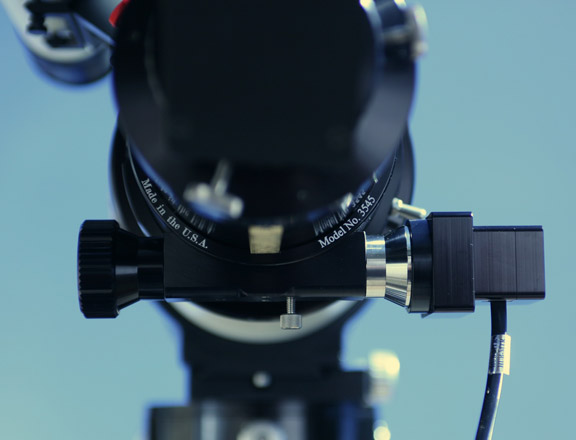 A set screw secures the spur gear to the pinion shaft. The installation instructions warn against over tightening the screw. The screw tension later became an issue as the gear slipped on the shaft after some usage. Even though the tension was firm, I careful tightened a bit more and prayed I wouldn’t strip the thread. Time will tell how well the gear remains secured.

For computer control, RS-232 is the serial communication protocol. Performance was flawless via USB using an IOGear USB to serial converter. ASCOM drivers need to be installed on your computer.

Fine focus is reproducible, precise and a delight regardless if viewing is direct or electronic (CCD). Even at the ridiculous magnification of 653x I found the focuser resolution quite sufficient to achieve focus as good as the scope and eyepiece could deliver. It doesn’t have quite the feel of manually racking the focuser across the focus point, and the “snap” is not as pronounced.

Rough focus takes a bit of time if you have setups and eyepieces that require markedly different focuser positions (like I do). An ability to rack in/out manually would be of benefit in this latter situation, or when power is not available.

I highly recommend spending an hour or two assembling various configurations and noting the numerical position at focus (after establishing a zero point). Then create a reference chart.

I also tested control using the freeware computer focus control program FocusMax 3.2.1 (thanks to the authors L. Weber and S. Brady). This works well as a nice complement to the hand controller, and can overcome the “reset to zero” behavior of the hub and hand controller when power is lost. The learning curve is a good ascent along with all of the other important integrated tools (not further discussed), but there is at least one unexpected pitfall discussed below.

The controls include move to an absolute position (like 2924), or relative move (like out 15 units). A manual move made with the hand controller is reflected in the hand control LED readout, but does not immediately update the position displayed in FocusMax until a subsequent move is initiated from the program. The program records the focuser position when the program is shut down.

Now the curse/pitfall mentioned above comes into play when the focuser power is cycled, but FocusMax keeps running. Say the focuser is at absolute position 2924, and the power to the focuser is cycled off-on (power bump, loose wire). The hub resets, the hand control showing "0000"; but FocusMax still reads 2924. There are three scenarios, none of which are desirable:

I speculate the preceding issue is mostly centric to the Starlight, not the FocusMax.


The component craftsmanship mirrors the quality of the Starlight focusers. Made from heavy gauge aluminum with a hard black lacquer-like finish, I will be sad to see the first surface mar. These pieces have some heft despite the small size; I will try to fashion some kind of rubberized or leather protector similar to the "condom" that protects the Astro-Physics keypad (a mobile phone case is about the right size).

The motor is small and unobtrusive (see photos), and looks like a part of the focuser rather than an awkward appendage. 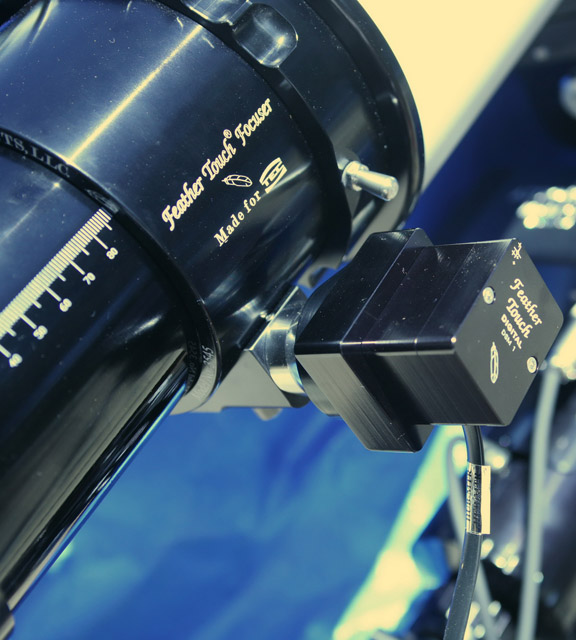 I do not have any direct experience with other add-on motorized focus control systems. The Optec and FLI look like the expensive patriarch and matriarch; Robofocus and MoonLite play in the same sandbox as Feather Touch; and the Meade is, well... it is Meade. I carefully studied all of them. None integrate as clean and unobtrusive with the 3545 as the Starlight.

Do you transport your scope in a hard case? My evaluation and purchasing decision totally overlooked how an appendage on the focuser would fit into the hard foam cutout of my expensive German case. The scope will not fit in the standard orientation with the Feather Touch motor attached. The focuser will fortunately rotate clockwise 90 degrees by loosening the tube-focuser collet; the final position slightly less optimal than normal but still acceptable (see photo). 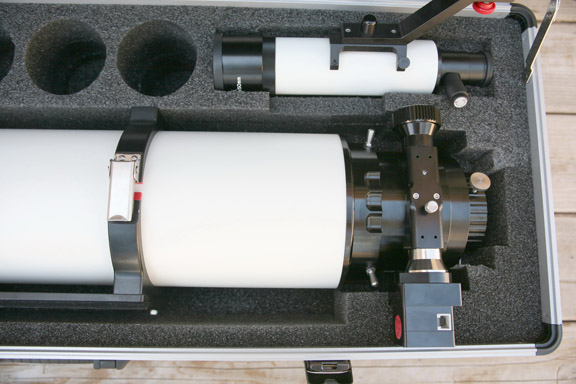 Although I knew that I would lose manual focusing, I didn’t realize the tradeoffs and inconvenience, such as if I forgot to drive the focuser full in before packing the scope in the case. I still prefer manual focusing for visual observing because it is quicker and nearly as precise.

The focuser travel is slower over long excursions than I hoped. Make a mistake driving one way, and the round trip is a yawner.

Cable management and USB communication is 50% more cumbersome. That translates into more time for setup and disassembly. There are also a bunch more things to step on and break.

The position reset to 0000 on loss of power is irritating (I may be overlooking some intended reason for it), and I hope the next generation addresses this "feature". One possible solution might be for the hub to include non-volatile memory to store the focuser position (perhaps even the ability to store positions for different focusers), and adding to the hand controller a "set zero point" button. I do see some engineering challenges, however.

Time will tell if the spur gear set screw will be able to hold the gear without slipping. If the pinion shaft had a flat seat for the set screw, I doubt gear slippage would be a problem. I am unaware of the reason for engineering the shaft without the seat.

The modular plugs for the cables will break at some time as they are identical to the flimsy standard telephone and Ethernet plugs. Carry some extra 6 and 8 wire cables.

A native USB interface to a computer is probably warranted because unfortunately RS-232 has virtually disappeared from new computers. USB to serial adapters that successfully work are a bit hit and miss. Configuring the COM port mapped to the USB port is often buried in the device driver properties, not exactly a place where most users want to go.

Finally, I wish there was a way to manually focus without disengaging the motor from the focuser. I’m now forced to always have power. If I forget to drive the rack full in before shutting down, the scope will not fit in my case.

Granted my experience with the product is limited, and the test of time is crucial. Nevertheless, I am impressed with the build quality, excellent performance, and unobtrusive integration with the 3545. The system cost is roughly on par with other mid-range systems, and the modularity will save money if you have more than one scope with a Feather Touch motorized focuser.


The problems are important and not to be ignored, but these are not deal killers. Planning and front-end legwork can overcome these issues.

My ideal motorized focuser would be one that I could optionally use when needed, fast and accurate, not require modifying equipment, compact, easy to use, and well built. The Feather Touch system for the 3545 meets most of these goals. An inline motorized focuser, such as the FLI DF-2, could strike closer to these ideals but at a substantially higher overall cost.

I highly recommend that you include the Starlight Motorized Feather Touch System for the 3545 focuser on your shopping list of candidates.