Collins I3 Eyepiece (old and new) 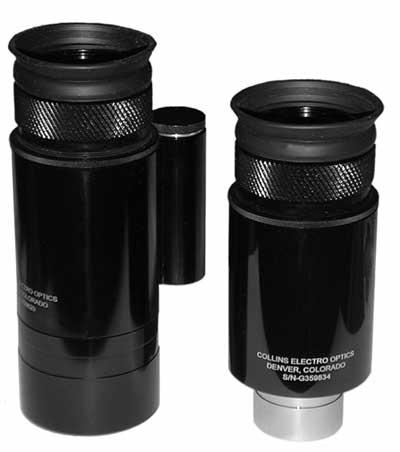 I have read previous reviews on the Collins I3 and have been quit frustrated with what the reviewers have said. I think the issue I have with the reviews I’ve seen is that they have not lived with the eyepiece. They only get one on loan for a few days. It is pretty hard to do an adequate review on a device as complex as the I3 with a few hours viewing. I have owned a Collins I3 for two years. I have slipped this eyepiece into a number of telescopes over that period of time as well as my own two Dob’s a Cassegrain and an FSQ. I have looked at many objects in a number of locations, and although I am a rank amateur astronomer, I know when I can see something and when I can’t. I should further qualify myself by saying that I am not a purest. I would much rather see an object…I mean really see an object, even though it has a slight greenish cast than to pretend to see it with “averted imagination”. I‘m aware that many have much more sensitive vision than I do.

Four years ago I picked up an Astronomy magazine and saw the beautiful pictures, bought an LX200 10” and put it in the back yard and then wondered where all the DSO’s were. Nothing looked like the pictures, actually most objects I pointed at didn’t look like anything except light polluted sky, nothing, zero, zilch. I know that I am not the only one to have this reaction. I’ve heard it many times.

Then the quest to actually see something began. I went to a large gathering on Mt. Pinos, north of Los Angeles, where there were between 50 and 100 scopes. I looked through as many as I could, one was a 20” f4 Dob…and the next day I got on Astromart looking for a 20” Dob. The owner of the one I found also just happened to have an I3. I had read the reviews, but hadn’t been impressed. After looking through it I bought the 20” and ordered an I3. The only way to get them away from me now would be to pry either the 20” or the I3 out of my cold dead hands. I am usually the only one at Mt. Pinos with an I3 and I’m easy to find… just look for the line behind the scope. To some, that might be a negative.

Both the older I3 and the new Thin Film I3 have some common issues. I’ll go over them:

Now to the comparison between the old I3 and the new Thin-Film I3.

The I3-TF’s main improvement is contrast. Spending about an hour on M42 going back and forth between the old and the new, you notice a dramatic improvement in the detail of the TF and you see a bit more of the cloud structure out to the far end of M42. The reason is the substantial reduction in the scintillation noise (sparkles). It looks like a good H-Alpha photograph. I tried this in the 4” FSQ, the 13” Dob and the 20” Dob. In all cases the signal to noise ratio of the TF was very noticeable in improved contrast. It isn’t that the old I3 lacked the detail, but when you improve the signal-to-noise by removing a lot of the scintillation noise you simply can see more detail. It, once again using the camera analogy, simply looked more detailed because even though this is real-time viewing, the image looked like you had doubled or tripled the exposure time, thus giving considerably more detail. I noticed this even more on faint nebula like the flame, which was quite dramatically enhanced in detail by the improved signal-to-noise of the I3-TF. Interestingly, the brightness of the object was the same in both eyepieces but the background was several shades darker in the TF with much less scintillation. It was like going from a magnitude 4 viewing sky to a magnitude 5 viewing sky. Not a bad improvement.

I haven’t seen many of my favorite DSO’s through the new TF I3 because it came to me after M8, M13,M16,M17,M20,M27, M57,M104, NGC4565, NGC253 and a whole bunch of others are gone for the season. After looking at M42 and NGC891 and a few other December objects, I have no doubt that the TF I3 will be even more spectacular than the older I3 on all of the above objects. The old I3 is breathtaking on all of them. Almost all globulars resolve to the core. M8 really looks like a black ’n white photo, On M16 you can see the three pillars very distinctly. M17 is unreal. M20 is stunning but you don’t see much of the blue portion. M27 is much like a good B&W photo and M57 is outstanding you can see the inner and outer edge of the ring and some of the spiral tails. M51 is absolutely wonderful. The arms are distinct in a dark sky, but don’t try this in your light polluted city lot, it takes a dark sky even with an H-Alpha filter. M82 is fantastic even in a light polluted sky with the H-Alpha filter and M104 looks like the photograph. The dust-lane and the detail are spectacular. NGC4565 and NGC253 are enough to give you goose-bumps. They look like the photos we’ve all seen in Sky & Telescope.

If I hadn’t found the I3 I think I would have given up the hobby. I wanted to see the pictures I had seen in magazines, and even with the 20” and a good Naglar I wasn’t seeing enough. Now, I can hardly wait for the dark of the moon so that I can drag this big contraption up to Mt. Pinos.

Would I buy the I3 again? That’s obvious. I now own the old one and the new one. I think the I3 is the best investment I’ve made in astronomy. It makes such a difference in my enjoyment of the hobby that I can’t imagine being without it. Don’t ask the question “will this eyepiece work well with my scope?” Instead, consider the I3 the central piece of equipment and then buy a scope that will work well with it along with the necessary additions like a good set of filters, including a deep sky, at least one good H-Alpha filter, a wide and a narrow if you can afford it, I haven’t tried an infrared filter but you could actually view in infrared visually if you wanted.

Obviously this is a big investment. For many it may even be out of reach. If I had the choice right now to buy a 12” Dob and the I3 or my 20”Dob and no I3, I would take the 12” in a heartbeat. And now you don’t have to choose between the old I3 and the new Thin Film I3. The new TF I3 is about the same price as I paid for my old I3.

What are you waiting for?
Lindy Williams
Simi Valley, CA