Having decided to bite the bullet and build an observatory with concrete piers out on my land, one of the first decisions I had to make was whether to spend what seemed an exorbitant amount of money on a professionally machined pier plate, make something relatively more crude myself, or try to hit somewhere in the middle and have some of my co-workers in our company machine shop make something for me. I’d been looking at Dan’s Pier Plates for a while now as I’d thought of building a pier into our deck at the house prior to buying the land outside of town. Certainly the website contained some pictures of some really nice deck installations that tended to make me drool a bit. Given the amount of work I’d put in building my own deck and gazebo, and designing the pool around I too, I knew I’d want something of that quality to maintain the esthetic architectural appeal of my back yard. Of course once I threw all those ideas away in favor of building a dual pier roll-off observatory, I was back to trying to decide what to do…

On the one hand, my CGEM could probably have ridden on an 8” pier, saving me some money on the plate, etc., but initially it wasn’t even clear that the pier plate adapters offered would support the CGEM. I assumed that the Atlas adapter should work, but it took a while to get that confirmation. The real decision to go with 12” plates was simply for flexibility and expansion. While an 8” plate would work for the CGEM, I really needed something larger for the 11” NexStar GPS, and I wanted to make sure I could swap things back and forth between piers as well as be future proof. For this type of investment, that’s really critical! Having finally decided to go for broke and order the NexStar 12” plate kit and the Atlas/CGEM 12” plate kit, I placed my order and sat back for the month or so it takes to get them made and delivered. They arrived pretty much on schedule and I opened them up to make sure everything was there, then stuck them in a closet for a month or two until I was ready to start pouring piers!

Ok, for anyone thinking of pouring the concrete pier, the whole point is to have stability; gobs and gobs of stability (and of course to get rid of the tripod legs my wife always complains about). You’re building this massive hunk of concrete to make sure your scope doesn’t move, and if it does get bumped, that it damps quickly. That’s all a big waste if the adapter to your mount is wimpy. Well, I can tell you that this is certainly one place where the 12” pier plate does not disappoint. At 1.5” thick, this thing is MASSIVE. And the 12” long, 3/4" diameter stainless anchor bolts pretty much guarantee this thing isn’t going to be moving once you get it installed properly. 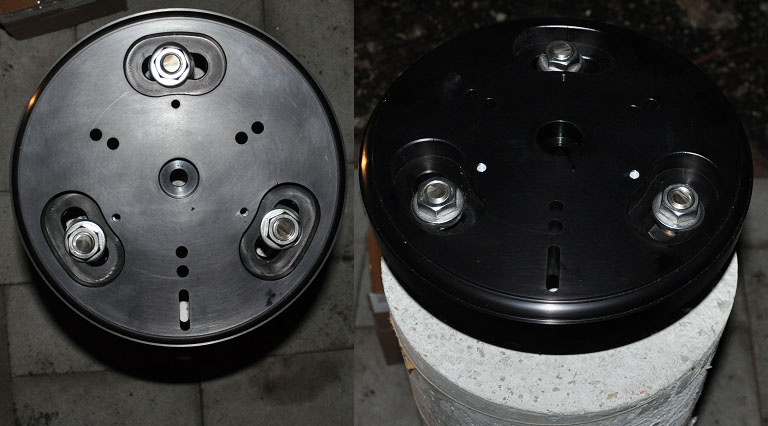 The plate is designed for flexibility, with three slotted holes for adjusting polar alignment, several sets of holes for mounting various scopes and adapters, and some slots for wedge alignment as well. Depending on the configuration, the plate comes with different inserts for the center bore hole. In the case of the Celestron NexStar mount, it has a center pin consisting of a machined down Allen screw and a plastic spacer insert. My one complaint on this arrangement is that the center pin is machined square, rather than rounded off like the pin on the NexStar tripod. This makes it considerably more difficult to get the scope to settle into position on the plate. This is something I plan to rectify later, but for the price it would be nice to get something meeting Celestron’s factory specs. Beyond that, it might be nice if the plastic insert was keyed in some way, but so far it’s not been too difficult to get it tight. It does, however, require a tool to install/remove, making my plans to be able to swap piers between different scopes a bit more difficult. 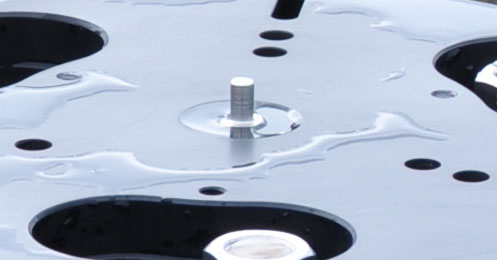 The CGEM adapter plate seems a bit small on the 12” plate. Given it’s designed to fit the 8” as well as the 12” pier plate, I understand why. While I know it’s somewhat pointless to waste the extra aluminum for the 12” pier, I would like to have seen something that covered more of the base plate to give it a better finished appearance. Beyond that, the plate mounts easily enough, using three shoulder bolts equivalent to those used to hold the NexStar, but on the inner set of three holes instead of the outer. There’s a different plastic insert that goes into the pier plate, and an aluminum knob that screws up through to hold the mount. In all it’s a nice looking piece, although I think the polar alignment stud is a bit short for use with the CGEM. However, Dan has offered to make me a longer one as soon as I can get him the dimensions.

Installation of the plate is relatively straightforward, although I think some additional documentation/recommendations would be helpful. There is a sort of “testimonial” guide on their website from someone doing an 8” plate, but no real instructions (beyond basic drawings) provided with the plate. The one thing I missed, the result of which can be seen in the picture above, was the brass sleeves designed to maintain the proper spacing in the slots and protect the plate from the threads of the anchors. Unfortunately, having left those out when I built the first pier, my anchor bolts ended up slightly crooked. Luckily I don’t need to move the plate down further (you really couldn’t due to clearance even if you wanted to) but it was a bit disappointing. Part of the reason the bolts were able to tilt in the concrete was that even though they were tight to the plate, there’s a pair of washers and rubber spacers between the bolts and the plate. This gives additional protection of the plate and damping of any vibrations, but without the sleeves there was enough give that the anchor bolts were able to tilt when pushed into the concrete.