One of the most important accessories that refractor owners use is a star diagonal. It allows observers to comfortably look through their instruments without craning necks or assuming painful contortions, when the scope is pointed upwards. Star diagonals come in two basic types-mirror or prismatic and can range in cost from just a few dollars to several hundred, depending on quality and size.

Many years ago, star diagonals were typically the prismatic type. In the 1980's, there was a change in trends and more vendors began offering mirror-type diagonals. This was largely due to an increasing number of "fast" optical systems appearing, which can have problems with a prism-type diagonal.

During the 1980's and '90s, vendors strove to offer flatter, better made mirror diagonals, with ever more efficient coatings. Today, we can routinely buy excellent units with 99% reflectivity, thanks to the use of di-electric materials on the mirror surface. These are very fine performers, have reflective surfaces which are extremely durable and have become the most sought-after diagonals for many types of telescopes.

Indeed, high efficiency dielectric mirror star diagonals can be the best choice in most instruments. But, there are exceptions and it can benefit the user to determine if their particular scope might achieve even better performance using a different type of star diagonal... namely, the prism type. 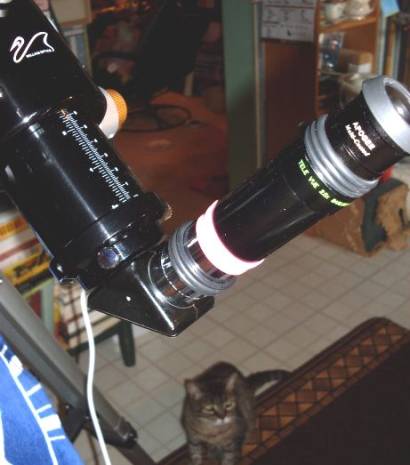 Over the past few years, an increasing number of relatively inexpensive ED refractors have come to market. Many of these scopes have color correction much better than achromatic. They might not be truly apochromatic, but many observers are happy to say "close enough".

The manufacturers of these ED refractors have chosen an optical formula which minimizes the appearance of defocused blue/violet light at the slight expense of red correction. Observers are often sensitive to worse correction at shorter wavelengths and typically look for "blue/violet" halos around bright objects as an indication of color error. Manufacturers have become increasingly aware of this and realize that the best way to make their optics appear to display less chromatic error, is to "shift" correction slightly. The result being lenses which generate less visible defocus at shorter wavelengths, but more blurring in the red. Unfortunately, this poorer correction at longer wavelengths is more detrimental to performance than many people might imagine. It makes it more difficult to achieve sharp visual focus, especially at higher magnifications. Planetary and lunar detail suffers. Difficult double stars (especially when the brighter component is reddish) are harder to discern. 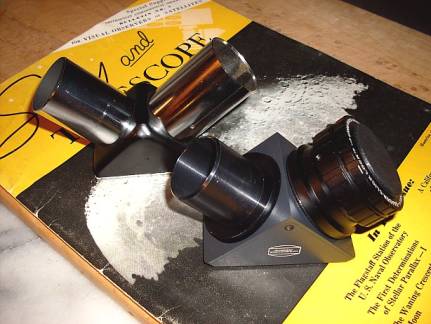 This is where a prism-type star diagonal can help. Since light passing through a prism is refracted slightly, image correction is altered. A star diagonal prism shifts color correction. As it happens, this shift is beneficial to a surprising number of today's ED doublet and triplet refractors sourced from Taiwan and China. The lens's red defocus is reduced by the refractive property of the prism. A small amount of blue/violet blur is generated as a result, but that defect is far less damaging to image quality.

For best results, make sure it’s a traditional “right-angle” prism, rather than a “correct image” (Amici-type) model. The right-angle prism leaves the image reversed. The Amici prism corrects this reversal, but can introduce image-degrading aberrations.

Owners of refractors by Astro-Physics, Takahashi, TeleVue, TMB and other very premium makes likely won't see significant performance benefits from using a prism. Those optical systems were designed to work best with a mirror diagonal. But, as mentioned, it's a cheap experiment, so might be worth trying even in those cases. From the results seen by the undersigned and an increasing number of other users who've tried a star diagonal prism with their ED refractors, there's a good chance you'll come away very pleased with the view!