I’ve been visually observing since the summer of 2008. My first view through a pair of 25x100 binoculars (at a public star party hosted by the Knoxville Observers here in East Tennessee) had me hooked on the view and the two eyed usage aspect. I took the plunge and purchased a pair of my own in November 2008. I've had my pair of Apogee 25x100's for a year now, so I’ve got a fair amount of time on them and usage out of them. I oscillate back and forth between telescope viewing and binocular viewing.

Anyway, I purchased these from a popular online retailer of optics that I had a 10% off coupon from. They were a demo pair and were advertised for $109.99. I actually procrastinated for a day after I found them figuring that is was some kind of mistake, but took the plunge 24 hrs. later and ordered them. They arrived about 4 days later, $98.99 shipped!

The case that they arrived in is a combo zipper/Velcro closure and has some padding and stiffness. You wouldn't want to drop them while they're in this case, but it's good for transporting them for short distances and it has a good shoulder strap attached to it. Compared to the vinyl/pleather case that came with a pair of Burgess Optical 25x100’s, the Apogee case is superior as it allows zippering 2/3 of the way down the sides – it’s a royal pain to get the Burgess Optical binos into their case as there is no side zippering. 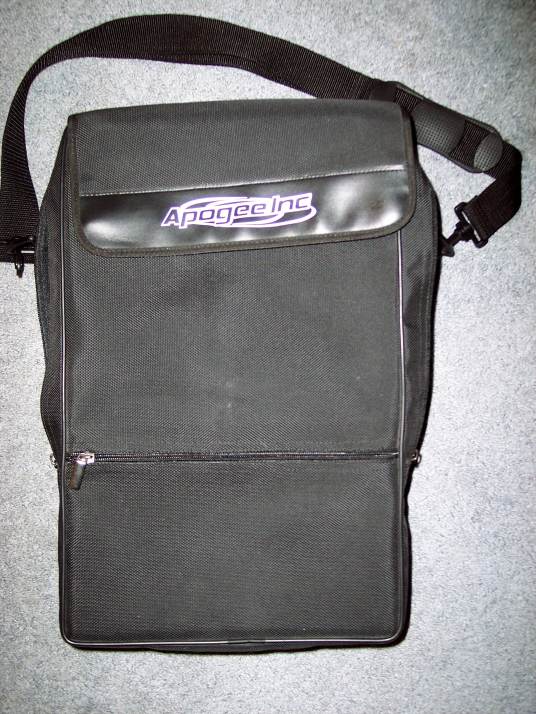 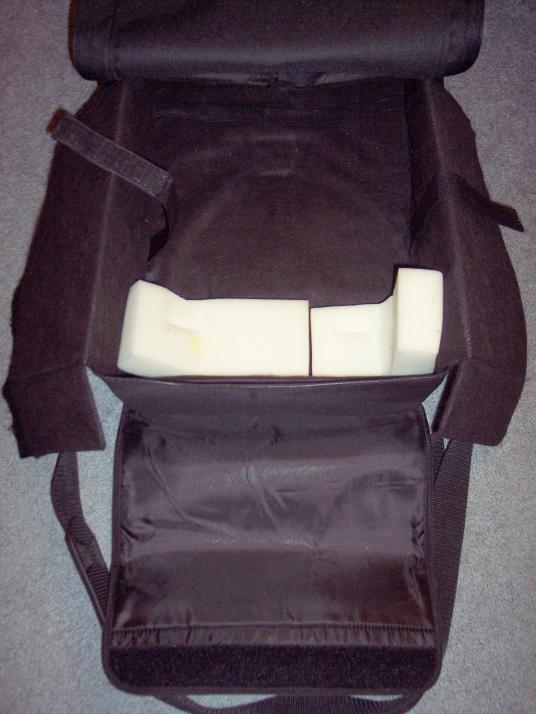 The objective lens covers fit perfectly and the eyepiece cover is a little odd and takes a small amount of twisting to get on properly.

The objective lenses appear to be multi-coated on the front (I can't tell about the internal side) and are a nice green/blue/purple hue. No defects or contaminants were observed on their surfaces. 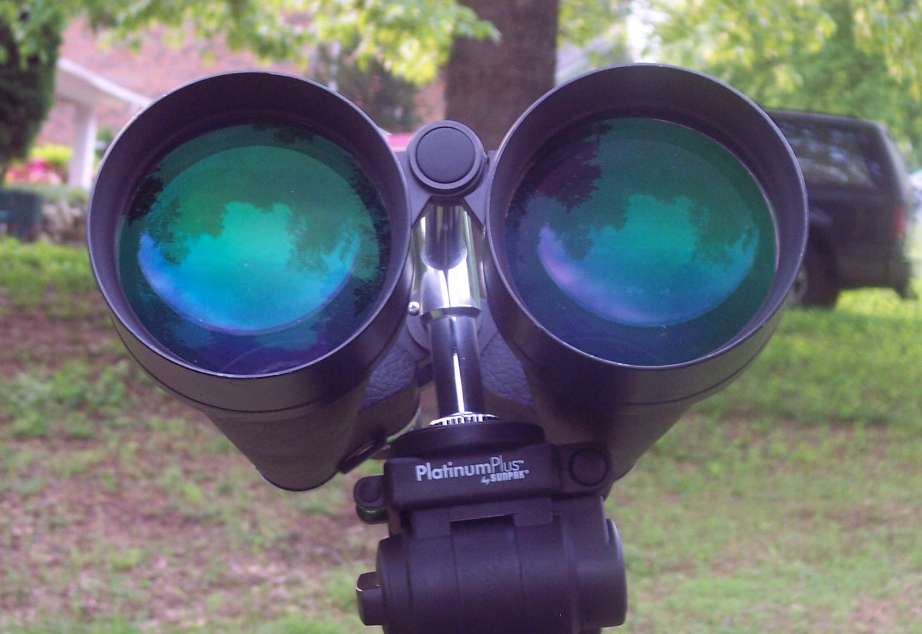 Compared to a pair of Burgess Optical 25x100 binos with the same body build and specifications, the Apogee’s appear to be coated heavier/thicker (Burgess Optical on the left, Apogee on the right):

The eyepieces appear to be only lightly single coated to a light shade of blue (hard to show here): 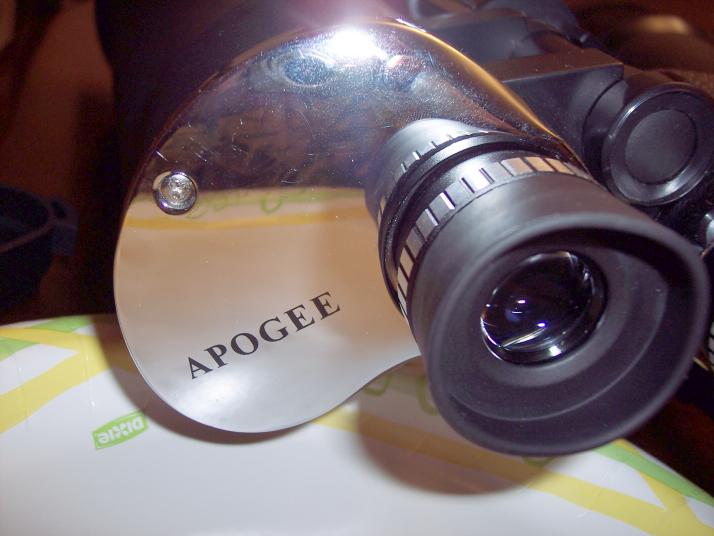 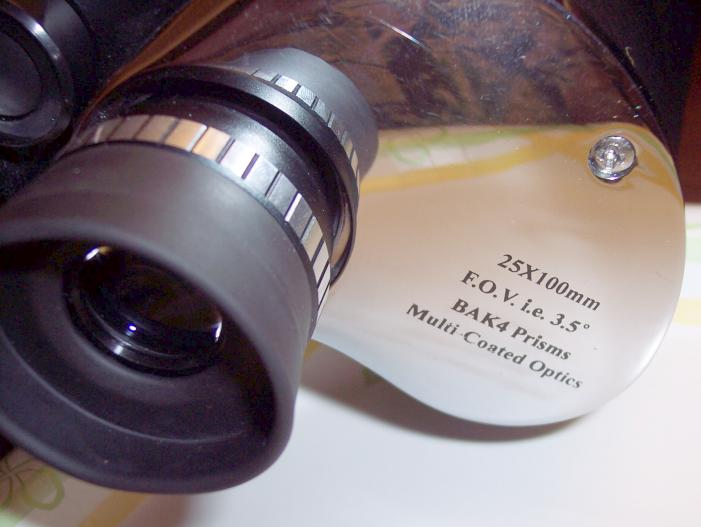 The prisms are advertised as being BAK4 and there is no visible light cutoff/dimming that is produced by Bk7 prisms (as in the Burgess Optical pair).

The eyepieces are individual focus and are just the right stiffness and have a pretty wide range of adjustment in my opinion. It seems my focus for both eyes is approximately in the center of each eyepiece's travel.

The stiffness of the tripod brace rod in the center is the best I've seen between a pair of Zhumell 80mm zoom binos and a pair of Barska 30x80's. I can't get these things to flex at all.

The stiffness of the IPD adjustment is very good as well - it doesn't move at all between viewing sessions and transporting it back and forth. The tightening mechanism for the tripod brace rod to tripod head mount is pretty hefty, but you can't get a good enough amount of tightness to prevent a little (not free, you have to push a little) rocking of the binos on the brace rod. It's not a problem, though. The bottom of the tripod mount rod where you attached it to the mount plate allows you to put so much pressure on the plate it deforms the plate a little (mine is hard plastic for my Sunpak tripod), but holds securely. 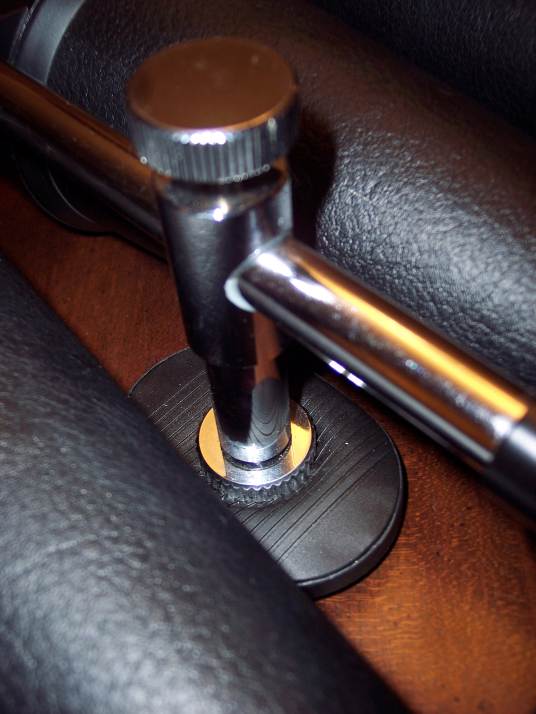 The binos arrived slightly out of alignment, but not bad enough to warrant fixing them immediately. I actually waited a few months before adjusting the conditional alignment. I began by peeling the roughened plastic covering back where the set screws should have been, until I had it peeled off all the way around the prism housing, at which point only one Phillips screw was visible. I searched the web at this point and found where someone had reviewed a pair of 25x100's on Orion's website and left a comment about their Apogee 25x100's not being collimatable. Bah, I thought, so off comes the chrome prism housing cover and there they are - three set screws and three holding screws. These are all part of an adjustment “shelf”. Adjusting the right hand one seems to have fixed my problem. Note that there are only two sets visible in the picture, the other set is just below the eyepiece. The red lines point to the collimation/alignment set screws, the blue lines point to the screws that hold alignment. Adjustment of collimation took me about 10-15 minutes using a radio tower that’s about ¾ mile from my house (not too bad for someone who's never done this). 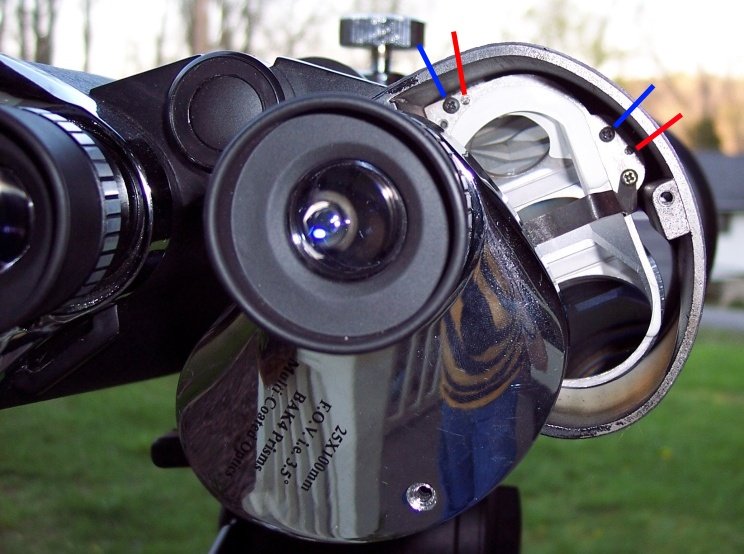 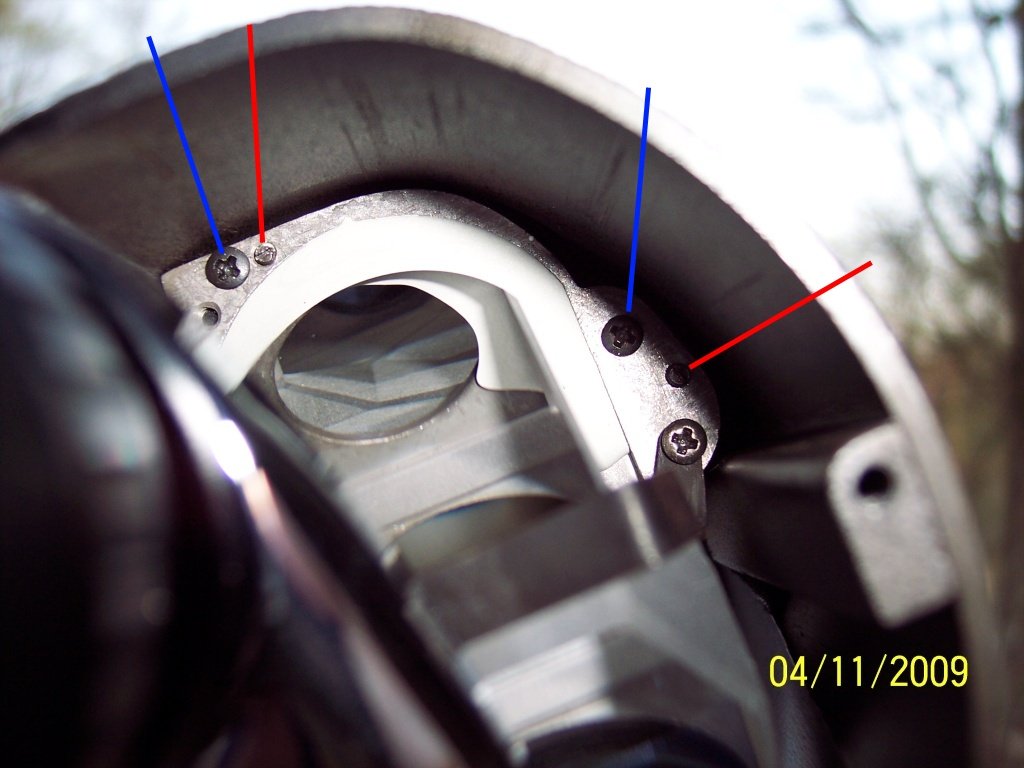 It might be useful to note that I used some of my wife's small double sided sticky hobby/s****booking tape to put the plastic binocular covering back on.

Now, on to visual observations.

The stated FOV for these binos, printed on the right eyepiece cover, is 3.5 degrees, and, on the web, it is stated as 3 degrees. The measured FOV, using Starry Night Backyard 4.0.5 and selecting some visible stars at the very edges of the bino FOV (I used some stars in Gemini and Cancer) is right at 2.25 degrees.

I measured magnification and aperture of these binos (3 times) using two homemade masks - 80mm & 70mm - over one objective of the binoculars. My results, measured with a pair of inside calipers, are:

So, it appears that the 100mm is masked down internally. Averaging the 2 closest readings, I get a magnification of 22.7x, and multiplying that by the original 4.1mm exit pupil, I get an actual aperture of 95.3mm (not too bad). These measurements were with the eyepiece cup off so that the exit pupil measurement was taken right up against the glass of the eyepiece. Additionally, the circle of light produced by a flashlight beam directed into the eyepiece and measured at the objective end is right at 95mm and appears fairly round.

Images are sharp and clear in the middle of the FOV, and are clear & sharp out to about 70%, then drops off sharply to the edge. There is some false color & chromatic aberration present on brighter objects - the Moon (but not too much, actually), Venus, & Sirius - mainly a little yellow and purple. Here’s a picture taken afocally (my camera focus obviously wasn’t too good at the time) of the Moon showing the chromatic aberration: 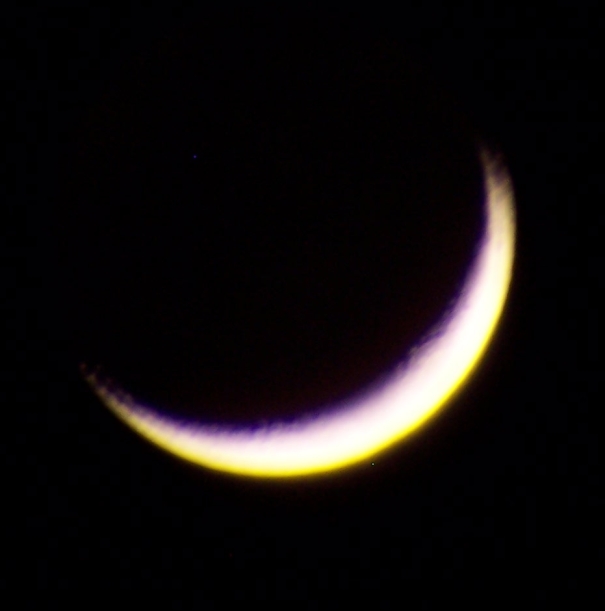 Maximum sharpness & clarity are centered in the center of the FOV. On the other hand, the views through my 4" refractor are sharp and clear all the way to the edge of the FOV, but dimmer (binocular summation is to blame).

For almost all objects, the view in these is a lot better and brighter than in my 4" refractor at the same magnification of 25x (I used a Zhumell 32mm Plossl in my Meade 800mm FL, 102mm objective scope). There were a few objects that were brighter in the scope at certain times.

A visual comparison between the Burgess Optical pair and the Apogee’s revealed (the differences in measured specifications between these two pairs of binos are very minor – 1.4 mm greater effective aperture and 0.2x less magnification for the Apogee pair, but these are obviously too close to detect in actual usage): 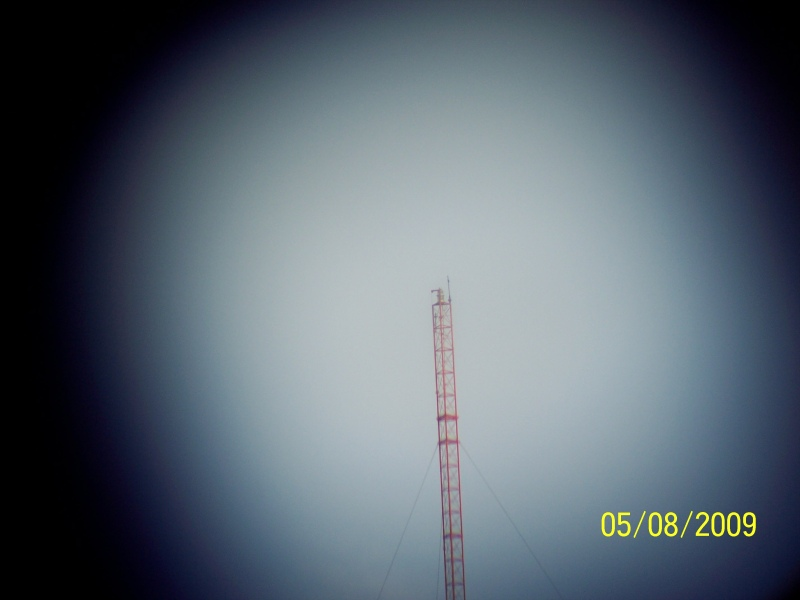 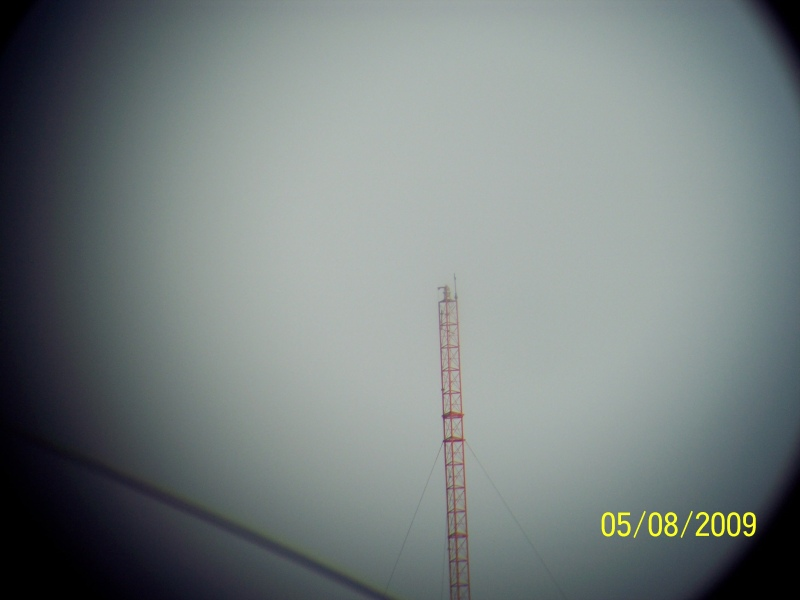 The only problem I’ve encountered, and it took me a while to notice this problem, is that there is some prism glue (the white/gray stuff that the red line goes to in the picture) that is partially covering the prism hole on one side of the binos after the second large baffle. It isn't too noticeable, but it is definitely there. You can just barely tell that the exit pupil for the affected side isn’t completely round. 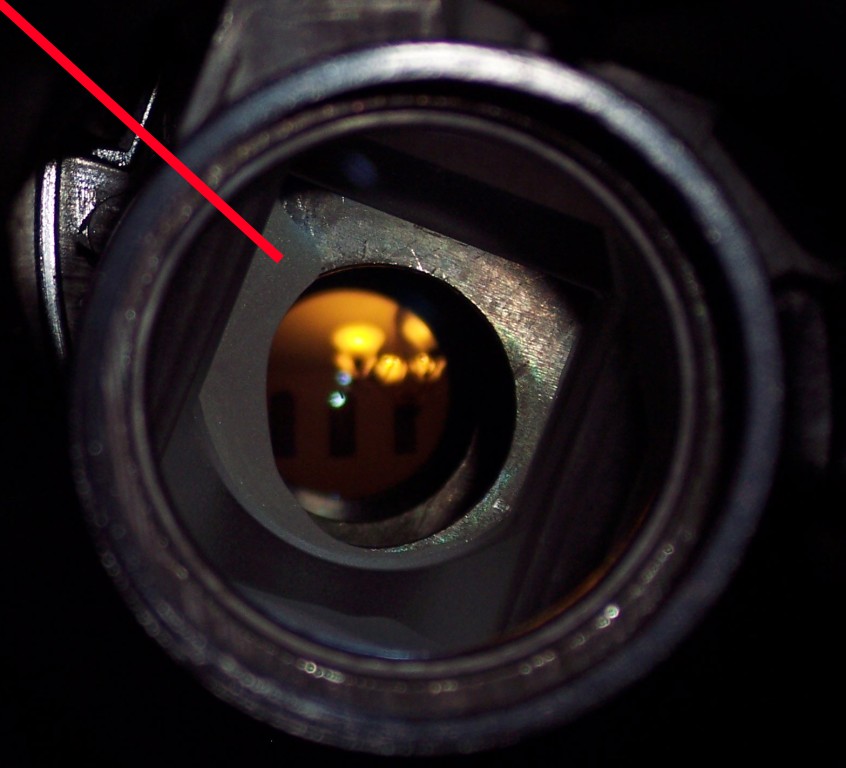 Am I satisfied with my purchase? - Very. I love these binos and the views I get through them.