I’ve been visually observing from East TN since the summer of 2008, with both binoculars and telescopes. I purchased a pair of Apogee 25x100s a little over a year ago, and decided to purchase another pair of 25x100s for a variety of reasons. I found a good price on a Burgess Optical 25x100 here on the CN classifieds, so I picked them up.

First off, the Apogee and Burgess binos are the exact same body style and armoring. They appear to have been made in the same factory. The main observable differences are:

1. The coatings appear thicker/more colorful on the Apogee objectives.
2. The Burgess pair uses BK7 prisms, light cutoff is clearly visible in the diamond/45° turned square pattern in both eyepieces.
3. The Burgess pair feels heavier (I don't have an adequate scale to measure this), but there is no obvious reason - the externals and internals look the same.

The case that the Burgess pair came with is vinyl/pleather covered with a combo zipper/velcro closure and has some padding and stiffness. You wouldn't want to drop them while they're in this case, but it's good for transporting them for short distances and it has a good shoulder strap attached to it. It is inferior to the Apogee case (nylon/cloth) due to the inability to zipper down the sides – this makes it a nightmare to insert and remove the binoculars.

Now, for the lenses & prisms. The objective lenses appear to be lightly multi-coated on both sides. They are a light green/purple color. Same as the Apogee pair, the eyepieces appear to be only lightly single coated to a light shade of blue. The prisms are definitely BK7 due to the visible cutoff, and it appears that they internal surfaces are lightly multicoated.

The eyepieces are individual focus and are just the right stiffness and have a pretty wide range of adjustment in my opinion, same as the Apogees.

The stiffness of the tripod brace rod in the center is the same as the Apogee pair and it is nice and stiff. The stiffness of the IPD adjustment is very good as well - it doesn't move at all between viewing sessions and transporting it back and forth. The tightening mechanism for the tripod brace rod to tripod head mount is pretty hefty, but you can't get a good enough amount of tightness to prevent a little (not free, you have to push a little) rocking of the binos on the brace rod. It's not a problem, though.

The collimation screws are inside of the binos, same as the Apogees - you have to take the gold colored eyepiece covers off (2 screws) to get at them, and there are 3 per side, but some of them appear to have been cranked on pretty hard as there is obvious usage and what appears to be varnish or some sort of glue to hold them in place. I've got pictures of the collimation screw locations for the Apogees (same for these) in my review of the Apogee pair here:

Now, on to visual observations.

Images are sharp and clear in the middle of the FOV, and are clear & sharp out to about 70%, then drops off sharply to the edge (same with the Apogees). There is the same amount of false color present on these binos as there is on the Apogees. Maximum sharpness & clarity are centered in the center of the FOV.

I've also measured magnification and aperture of these binos using two homemade masks - 80mm & 70mm - over one objective of the binoculars. Measured with a pair of inside calipers, the results are:

So, it appears that the 100mm is masked down internally. Averaging the 2 closest readings, I get a magnification of 22.9x, and multiplying that by the original 4.1mm exit pupil, I get an actual aperture of 93.9mm. These measurements were with the eyepiece cup off so that the exit pupil measurement was taken right up against the glass of the eyepiece.

One item of note - after a side by side comparison, daytime views of the sky through the Apogee pair seems a little yellow, whereas the view through the Burgess pair seems a little blue. I've attached pics below to show this (the first two pics are courtesy of the previous owner, Jim Rosenstock, used with his permission – thanks, Jim). The pics of the tower (about 3800' away) were taken afocal with a Kodak Z760. 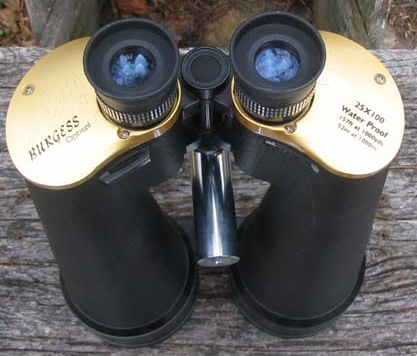 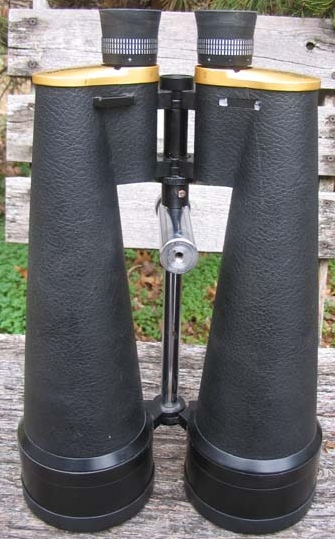 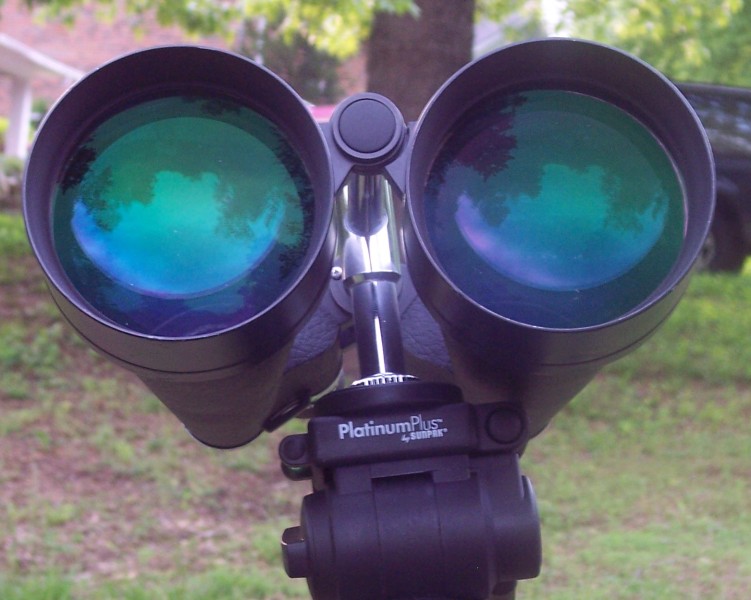 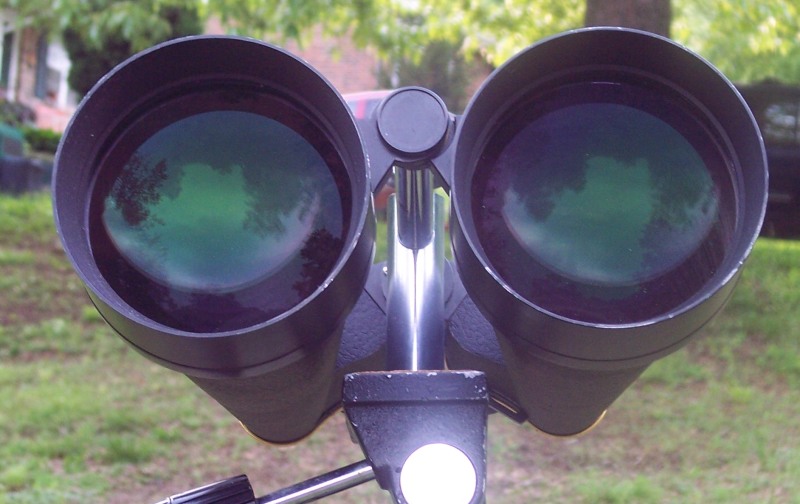 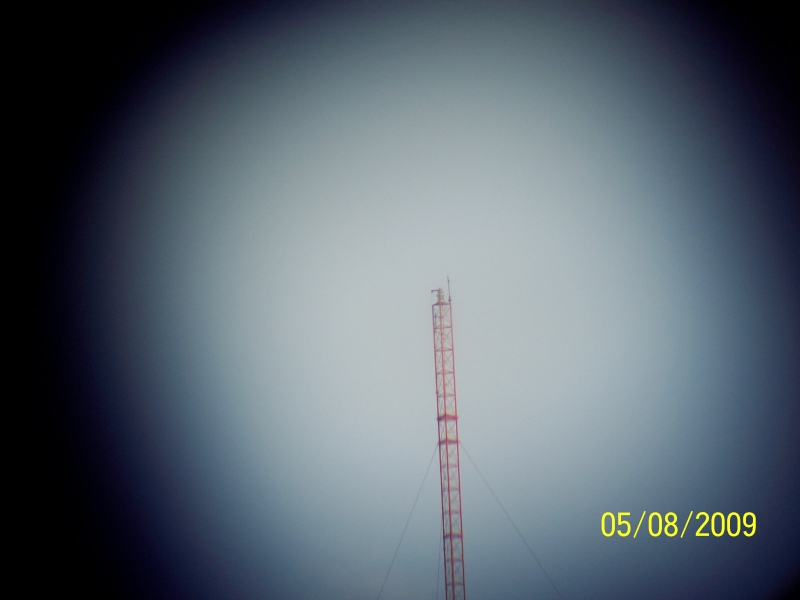 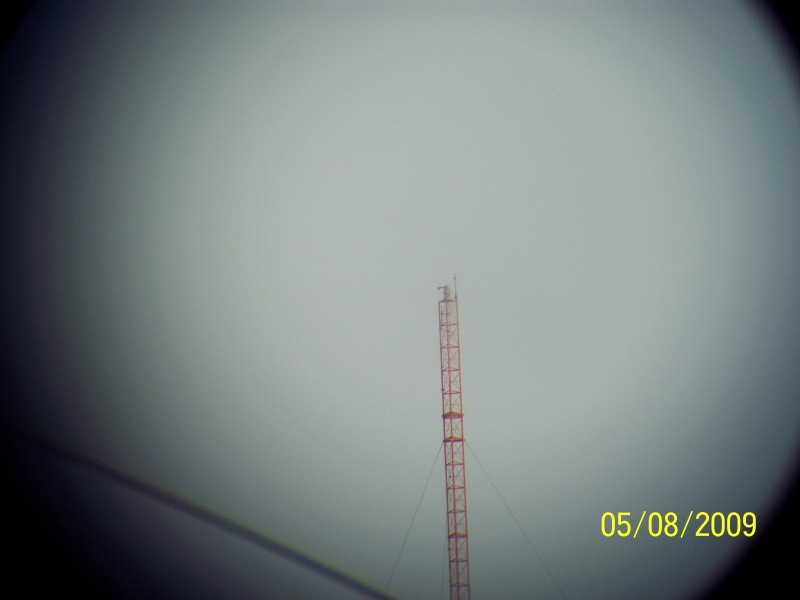