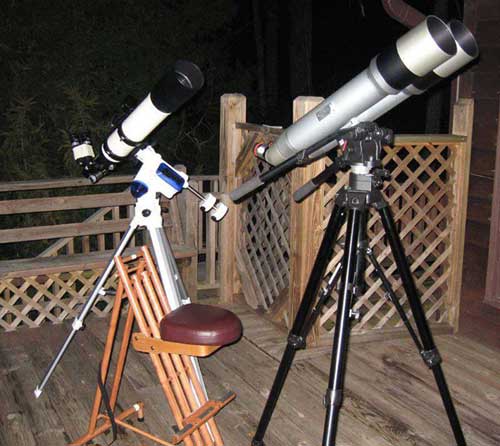 Having had several nights now with the Saturn III and facing a really dark moonless night, it seemed the time was right for a direct comparison of a high quality 5" APO (TeleVue NP-127) with DenkII binoviewers Vs. the Saturn III. Of course the APO/Denk combination is more than three times the cost of the Saturn III - but just how do they measure up for two-eye viewing at a comparable power? The Saturn III is a long FL binocular (39x100 at F7.5) that has the distinct merits of being very light (only 13 lbs) and offering 45-degree viewing. These were mounted on a Bogen 503 head with a 475 tripod - adding only another 12 lbs). The APO is the TeleVue NP-127 a high quality Petzval design with a very short FL (F5.2). The Denk II's are a very high quality binoviewer with the benefit of a power switch that allows magnifications of 44x, 71x and 110x from a single set of 21 Denk EP's. My AltAz mount for the NP-127 is still not ready, so for this test, it sat on a Vixen Sphinx Mount (although I didn't bother hooking up any power - just use it in "nudge" mode).

This won't be a "scientific comparison" - just some rambling observing notes over the course of some five hours of observing with both. With the new moon only a few days away and the first clear skies in over a week, this was a great time for the comparison. Skymeter showed 21.30 - about as good as it gets here. The shootout was intended to compare the views from glorious objects like M42 to very faint objects like M74, Saturn and several other items. A fine APO should provide sharper views than the Saturn III's achromats, but the Saturn III's offer 25% more area for light-gathering - how noticeable would that be? Both scopes were put outside 30 minutes ahead of viewing since they were in a warm office. Outside it was 40F and unusually windy.

This is considered one of the most (if not THE most) difficult Messier Object, but having managed to catch it in my 18x50 binoculars on an equally dark night when it was directly overhead, I was assuming it would not be that difficult to find. Since M74 is now well past the Zenith, I did not want to leave this till later as it is tough to catch when it's lower in the sky. My prior post on Cloudy Nights about finding the Phantom referred to an asterism which I call "the hat" which is like a broad-rimmed hat that lies just above M74 and makes it easy to find. All six stars of the hat were readily visible in the Saturn III's and M74, while faint, was quite clear below it. Switching to the APO, the difference was immediately apparent - the APO was showing a less contrasty and noticeably dimmer view and it was a real stretch to capture all the stars in the hat. M74 was visible, but only just. A quick diversion to m78 near Orion for another not-so-bright DSO confirmed that the Saturn III's were delivering noticeably contrastier views with the better light gathering power having a really noticeable edge.

Dark moonless skies with Orion high up - it just doesn't get any better than this and the views were breathtaking. The Saturn III showed all four components of the Trapezium as tight points with good separation. The APO's view surprised me - it was no sharper than the Saturn's which made little sense. The only explanation I could think of was that the NP-127 had still not reached thermal equilibrium (and in fact this was true - when I returned an hour later, the Trapezium WAS slightly sharper in the APO). The better contrast on the Saturn III's helped punch up Trapezium B though. The nebulosity was significantly more pleasing in the Saturn III's, again helped by the higher contrast. Clearly all the glass in the light path on the APO and Denk's were taking their toll vis-a-vis contrast.

Next I moved the Saturn III's up to Alnitak and got my first view of the Flame Nebula. I wasn't even expecting to catch this as this is another low-surface brightness object, but the central dust lane separating the two halves of the Flame were readily apparent as was the narrower perpendicular dust lane on the "bottom" end. As expected, the APO was having real difficulty presenting this object. I decided that the main dust lane was visible, but it was a stretch and if I had not seen it in the Saturn III's, I certainly would not have even noticed it in the APO unless I was really looking for it.

The small grouping of stars around sigma Ori allowed the APO to gain the upper hand since these are all bright stars and so the sharper image prevailed. Both instruments though were cleanly splitting the adjacent 8.4" double without difficulty.

M79 is not much to look at this power as it is a relatively small globular cluster(3' for the visible part) but again it was noticeably brighter in Saturns. I tried the higher 71x and 110x powers on the APO's Denks, but the view was not improved much by that.

M31 - contrast wins again with M110 visible with direct vision on the Saturn III's but only with averted vision on the APO - the perfect measure of the additional light gathering power of the Saturns.

M41 ("Little beehive") by Sirius showed well in both but the APO showed off the central orange star (HIP 32406) a bit better than the Saturn III's.

Sirius is a real killer test for CA and the Saturn III's delivered Sirius with significant (but by no means objectionable) purple fringing. Here's where a quality APO shines - there was no trace whatsoever of any color fringing in the APO - quite amazing performance for an F5.2 objective (even at low magnification) - and a testament to how well the Petzval design works in controlling CA. But it did take an object as bright as Sirius for the Saturn's to exhibit any CA - on virtually all other stars, the CA was just about completely controlled.

M51 Whirlpool - clearly visible in the Saturn III's as large and small galaxies with bright cores and the orientation was very obvious. The APO showed the cores as well, but the lower contrast of the view was less satisfying.

Saturn - the view through the Saturn III's was very good although some CA was noticeable due to its brightness - the APO of course was showing no CA at all any of its powers. Both scopes caught Titan and Rhea but Dione and Tethys seemed lost in the glare. A quick switch to the highest power on the APO though reeled them in. Observing the next night, I caught all four moons in the Saturn III's with Dione and Tethys being just a tad further out. There was considerable turbulence, so even with the higher power on the APO, the Cassini division was not visible. As a result, the view of Saturn was really no better on the APO than in the Saturn III's.

The Saturn III's performed better than I expected - the views were consistently more satisfying due to the higher contrast and brighter images, and while the APO may have had the edge on sharpness, this was only noticeable in a side-by-side comparison. The Edge Sharpness on the Saturn's is excellent - The Trapezium was still readily split at 80% out and even sitting on the extreme edge of the field, only the B component got lost.

On the second of the two nights, I compared the Saturn III's with my other low-mag light bucket: a C9.25" with a 40mm Pentax XW Eyepiece yielding 59x. M42 was stunning with this combination - the almost 3x light-gathering power had a dramatic punch. But returning to the Saturn III's was not disappointing - the image was noticeably dimmer, but the pinpoint stars were beating those of the C9.25 which was struggling with the rapid temperature change and probably required another collimation pass.

What I learnt from this involved no big surprises. The Saturn III's are rapidly becoming my favorite instrument by far. It's not going to replace the APO when it comes to double-stars, lunar and planetary observing and imaging, and it won't compete with the C9.25 when chasing really dim objects, but overall, the super-fast setup (less than 30 seconds and I'm observing) and no cool-down to speak of means that this is the scope I prefer to use. After a while, spending some 10-15 minutes setting up and breaking down gets to be a chore after getting used to a less than 30 second effortless setup. With 40x and 75x shortly (hopefully!), these bridge the gap between binoculars and telescopes - handling a lot of low power observing I used to do on a telescope and the mounted binocular observing I used to do with smaller binoculars. A tripod with an elevator shaft like the Bogen 475 is a real plus with LONG binos like these. The 503 head is an excellent head and while it was originally only intended to be a temporary solution, it works so well, that I've stopped looking for any alternatives.

40x is good for DSO hunting and while the FOV suffers accordingly, I don't find that to be a problem - you can still get the whole double cluster in view and Andromeda and its two companions to fit. The 75x EP's will be a nice addition if/when they appear, but the 40x EP's will be the workhorses.

I was concerned when I bought the Saturn's that at six times the cost of my 25x100mm Oberwerk IF's, they would not seem like that worthwhile an upgrade, especially since I had a pair of DenkII's for my 5" APO, but those fears vanished quickly. The Saturn III's are definitely an excellent balance of power, light-gathering ability and weight. I used to think a lot about those great Fuji 150's, and while they would provide better views, I think about the fact that 25x is a bit on the low side power-wise and not only are they three times as expensive again, but more than anything is that they would be over three times the weight and a lot more effort to handle.