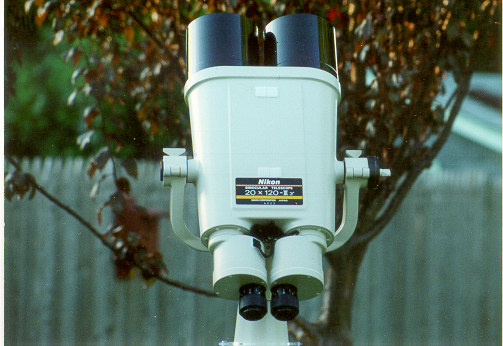 I've always had an interest in optics, even at an early age. Over the years I've had several different types of high quality, small binoculars that I've used for bird watching; Leica, Ziess, Swarovski and Nikon.

I currently use and love my Nikon LX 8x42s. They fit my hands perfectly and the optics are second to none. I've always wanted a large pair of binos that have the quality of Nikons. I'd thought about the 25x150 Fujinons. At one time I had the 10x70 Fujis and was not impressed.

I searched around to see what was out there in large aperature binoculars and come up with the Nikons. I feel this was the better buy considering the yoke mount is included with the binoculars. The mount comes separate with the Fujinons.

Before I ordered my Nikon 20x120 III binoculars I had to find a mount that was up to the task of 40 lbs of binocular and yoke. I went to a local camera shop, looked at all sorts of new equipment. Unfortunately I could not find anything that would work. In the back room they sell used equipment, so I thought I would just take a look at what they had. There it was! A Linhof large format camera tripod with a geared head. It was even cream colored to match the binoculars. I was sold!

A firend of mine machined a plate to bolt to the bottom of the yoke mount which fits down onto the top of the geared head. I can crank the binos over my head and they are rock steady. This combination is perfect for anyone who has these binoculars.

I purchased the Nikon 20 x 120 IIIs from Mike at Astronomics. They were a special order item only from Nikon in Japan. It took about four weeks to receive them via UPS. Seeing the binoculars for the first time after unpacking was a stunning sight! 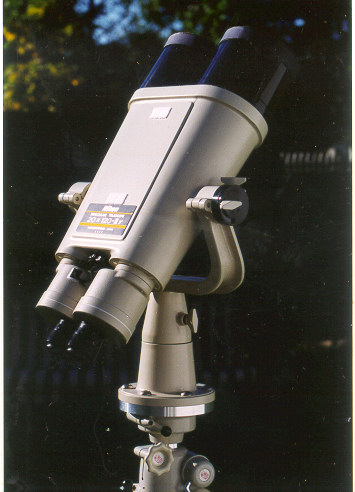 My first taste of optical excellence came when I received an Astro-Physics Starfire refractor (130 F8 EDT). Having said that the Nikons did not disappoint. The binos have a 3 degree field of view. All three of the belt stars of Orion fill the field of view. The stars are as sharp as I have seen in any bino. 95% of the field is flat and the collimation is perfect. Looking at the full moon, the limb is pure white. No secondary color at all on the Moon or Sirius. The brightest stars are perfect points of light and had no flares or false color.

I live in the suburbs of a town with about 75,000 people, so you can imagine it is not real dark. One night with good transparent skies I turned the binos to the Orion Nebula. I looked in awe for what must have been two hours. The view you get with sucha a quality large aperture binocular is beyond description. The Nebular almost filled the entire 3 degree field. It was as if you were driving through the Nebula. It seemed to wrap around from the sides. The three dimensional view is awesome. During this I noticed the Lime Green color inside the brighter central area of the Nebula also. Pink, Lavender and Purple in the outer extensions. This was the best view I ever had of this object and at one time I had owned a large aperture dob (18" Obsession). You might see fainter stars with the Obsession but the overall impact of the view was superior with the Nikon binoculars.

Open star clusters are absolutely awesome. They take on a completely different appearance in the binos as compared to a telescope view. You see depth and star patterns that are missing in a telescope. Also, the subtle color differences in the stars are BREATHTAKING. The Double Cluster is awesome. The 3 degree field frams this cluster nicely. M35 is bright with NGC 2158 easily visible. The Pleiades is probably the most stunning of all the open clusters. Again the 3 degree field frames this cluster perfectly. I can't say that I have seen the Nebula around Merope, but I have not been to a truly dark site yet.

I have 20/20 vision and that might help in this next feat, but I was shocked when I looked at Iota Orionis and saw the brillant star with the close companion star almost touching and the third star to the south. A beautiful sight! Remember this in 20 power with the 120mm lens. The fact that you could see a star that faint at the edge of that brillent primary is a testament to the optical quality of this glass!

The opinion of a very excited Amateur!