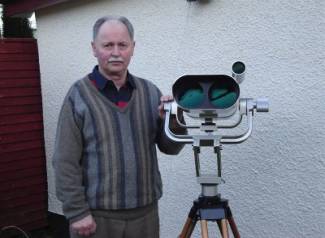 Received the above binoculars in April 2005. from John Burns of Strathspey Binoculars, Scotland,and he had delivered them before I had paid for them. There is not much change from £1,000. I admire the trust. They came in three different packages and all at the same delivery time. The standard of packaging was excellent and there was nothing bashed or bruised.

Again the standard of packaging was very good.

The mount fixed solidly to the tripod. On attempting to attach the finder scope to the binoculars I found that the wrong bolts had been supplied. This was an oversight from the manufacturer and I brought this to JohnÕs attention. It was not too difficult to obtain two suitable bolts for the attachment and the finder scope was soon in place. The finder scope does align with the binos without any adjustments. The finder scope came with the package and was not an added extra. 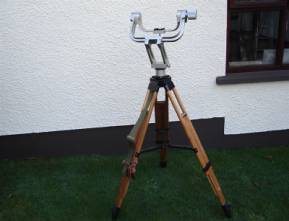 The binoculars are very heavy (26lb) but with the carrying handle in position they were easy to attach. (even in the dark.) to the mount fitting and screwed into position. There was slight play between the fixing plate of the mount and the dovetail on the binoculars even with the screw clamp up tight. A thin metal shim fixed that problem.

The coatings on the front lenses are a deep dark green. There was no lens cover provided so again I am on the lookout for something that I can adapt. 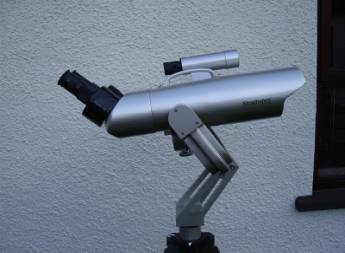 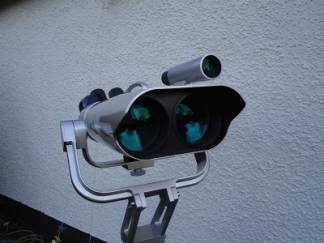 Two metal screw off/on dust covers protect the prisms. These are well engineered The two 25x eyepieces are large but not heavy. The 40x are a little smaller. The coatings on both sets of eyepieces did not appear very colourful and in fact were quite clear.

To fit the eyepieces one just plugs them into the focusers. This has proved to be slightly annoying as the left hand focuser is at a slightly different tolerance than the right and it takes a firm effort to insert the eyepiece. This may prove a difficulty in the colder nights as the receptors will tighten even more.

On contacting John Burns, he suggested that I might use a very light lubricant or as Big Binoculars suggested , a silicone wax. I have tried other 1.25 eyepieces eg. Tal. Most of them fit. Meade eyepieces are a perfect fit.

Collimation appears to be very good.

My initial observation was of trees and wildlife 100 yards distance from my back garden.

The helical focusers had an excellent feel to them in their operation, just the right amount of torque was required and they stayed where you left them. It takes a little practice to get used to the bulky viewing end of the binos and as I have a thin nose I had no difficulty
in bringing the eyepieces into one complete perfect round view.

The right eye view did not snap into focus as good as the left eye view. My eyesight is very good for being over 60 and I donÕt require glasses.
I could clearly see the veins of each individual leaf on the trees and the birds seemed to sitting on the front of the binoculars. I could even count the number of flies hovering in the branches.

The 40x brought excellent detail of various objects. I was surprised and pleased by the lack of false colour On recent trips into the country side I was able to do long distance observing. From a local mountainside, with the Tal 2x Barlow giving 50x., I was able to see my own street in good detail, which was approximately 4 miles from that location as the crow flies. Vehicle number plates at almost half/mile were easily readable.

I should add at this point that concerning the two TAL 2x Barlows I had to have some minor reduction in the barrel diameter using a lathe, so that they would fit the binocular receptors. 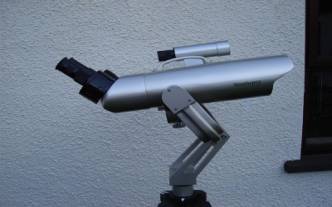 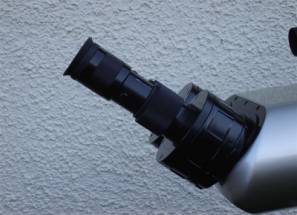 This was the main purpose of my purchase. My home location is not so good with light pollution and intruding buildings and our summer time was starting. It is still daylight at 11.30pm and bright again at 2.30am. But I did want to try out my new toy!

FIRST VIEWS OF THE MOON.

With the 25x eyepieces on quarter moon it was like looking at a Lunar training manual. Though not a huge image, the detail was very good and very little false colour. I was pleasantly surprised. With the 40x. eyepieces, the detail again was very good and I must have spent 30 mins looking at just one crater. The Lunar mountain ranges had far more 3d than my Tal 200k scope. Again very little false colour. With the Tal 2x Barlows on each set of eyepieces the viewing, when atmospheric conditions were settled, was very good with huge amounts of detail. At 80x the moon appeared colossal.

STARS AND STAR FIELDS AND SOME GALAXIES

The double clusters in Persius are outstanding.

The views around Deneb and Vega are superb.

M 81 & 82 were at the Zenith but with the mount that is supplied there is no part of the sky that cannot be accessed.

Alberio is quite distinct with the two different coloured stars.

M27 shows as a grey blob and the Ring nebula shows a definite doughnut shape. 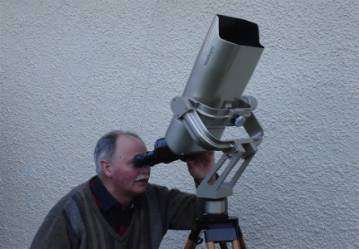 Jupiter and its moons were reasonable with two bands clearly defined on the planet. Saturn was good with the broad ring and the ball of the planet in good definition.

Both planets showed a nice degree of natural colour and again, false colour was at a minimum. I actually used the two TAL Barlows2x, this again gave me 50x and 80 x. This clearly added to the magnification but not greater detail.

These binoculars are excellent for day time viewing and star fields and the Moon. Planetary observation is reasonable. The comfort of the 45 degree focusers and the use of two eyes make them a treat to use. On the mount and tripod supplied they are as steady as a rock. Reaching the Zenith is no problem at all. In spite of the minor problems as stated above I am looking forward to the real dark nights coming in to really give these binos a more thorough test. I am sure that there are great treats and delights in store.

I have just purchased two Meade 20MM, 4000 series super plossls and they have brought a new dimension to the clarity and contrast to every view. It is quite obvious that the eyepieces as supplied are just not in the same league as the Meades and I would recommend to any future purchaser to invest in better eyepieces.

I am not connected to Strathspey Binoculars and these are my personal comments.