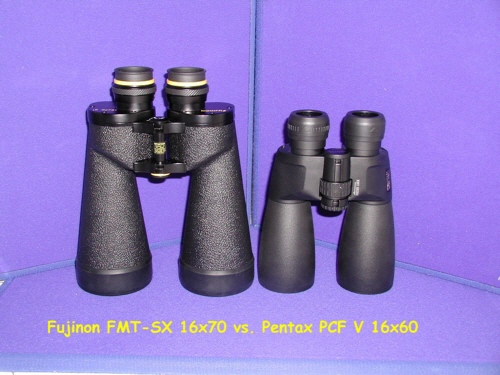 Why would one want to purchase and use a pair of 16x60 binoculars? What if any advantage do these have over other binoculars considered by many to be the best available to the amateur astronomer in a 16x70 pair (or equivalent), specifically the Fujinon FMT-SX 16x70's? To me, assuming the optics checked out, the Pentax 16x60 offer a lighter weight alternative with center focus that can double as both a daytime long distance viewing binocular and a good astronomical binocular particularly suited for quick trips to the backyard in a suburban location. This is exactly what I found.

The Pentax PCF V 16x60 and it's brothers, the 8x40, 10x40, 7x50, 10x50, 12x50 and 20x60 represent the latest version of Pentax porro prism binoculars. Previous versions of this rubber clad binocular have gone by the name PCF, PCF II, PCF III and now the PCF V (there was no version PCF IV). Later PCF III's and all PCF V's are made in China; earlier versions were made in Japan. The Type V's introduced the pop up eye cups and went to black coloration in lieu of gray. The 16x50 Type III and the 20x50 Type III were upgraded to 60mm objectives with the Type V's. Notable features include BAK 4 prisms, full multi-coatings, click stop diopter adjustment on the right eyepiece and "Focus-Lock". While not inexpensive, they are a real value with prices ranging from about $140.00 for the 40mm versions up to about $250.00 for the 20x60's (discount pricing).

The Pentax 16x60's have not been reviewed nearly as much as the 20x60's. The 20x60's are advertised as having special field flattening lenses in the eyepieces and indeed they test very well. All the reviews I have seen indicate that they are very sharp with a nice flat field. The only knock being the narrow 2.2 degree field of view. The 16x60's with their wider 2.8 degree field, and lower magnification and larger 3.75 degree exit pupil have had more appeal to me on paper, but where were the tests? I knew the 16x60's did not have the field flattening lenses so how would they do in critical applications such as viewing the night sky? The end result was my purchase on faith and this review.

I would call the body style of the Pentax PCF V's as a modified German or Zeiss. Some may call in a modified American or Bausch and Lomb; it does have the look of a one piece American style, but by strict definition it would be the former. In any event it is quite attractive and the angle of the two optical tubes when the correct eye separation is made is such that each half angles down; thus the separation of your hands is very similar to what you would have when holding a pair of roof prism binoculars; I like it! Another thing I like is the ease of use of the binocular in respect to the case. The one strap for the binocular is also the strap for the case. If you need to whip the binoculars out of the case quickly, you can do it with these.

One complaint I do have is the rubber or rubber-like material that makes up the outer shell of the binoculars varies slightly between the upper half (body) and the lower half (objective tubes). The upper half looks blacker and has more of a shine. The lower half has a flatter black appearance and the surface has a bit more grip. This is not a one unit variation, all of the Pentax binoculars are like this. You don't notice it that much, but anyone who looks for it will see it. It is as if the rubber covering came from two different sources and the formula for each is slightly different. 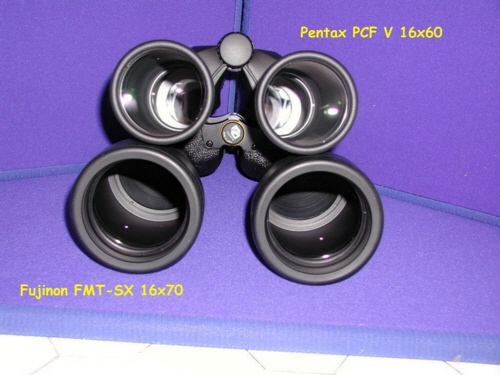 I used my Fujinon FMT-SX 16x70's for comparison purposes. This is an excellent binocular and there are many reviews on it available at this site and other sites on the internet. I used both binoculars on a monopod and I also hand-held both pair.

Let me say that the weight difference between the two is very noticeable. You are talking about a binocular on steroids vs. one that is slim and trim in comparing the two. I will say that the extra heft of the Fujinon's actually help steady the image on the monopod; however I found that I could get virtually as much use out of the Pentax hand held as I can get with a 10x50 pair of binoculars.

In a nutshell let me say that the Pentax 16x60's did very well! Had it been a night where I was evaluating these for the first time as a prelude to purchase, my first look at the Pleiades would have sealed the deal - great contrast, pinpoint stars, a sharply defined field edge (no diffusion here) and stars that essentially stay stars virtually up to the field edge. These binoculars are better than my Pentax 12x50 Type III and my Pentax 8x40 Type V in respect to the
stars staying stars up to the field edge. I compared the Fujinon and Pentax pair very closely in respect to this point. I have to say that I cannot say which is better. Both have stars that still look good at the edge. The stars in both are essentially unchanged until about 80% of the way out from the field center and then the degradation of the stars is very slight. In many other pair coma, astigmatism and field curvature ruin stars at the edge. I tried to refocus a star at the field edge in the Pentax, but could not do it. So while there are no reported field flattening lenses, it appears none are needed. The only binoculars I own that has better stars at the field edge would be both the Fujinon FMT-SX 7x50's and Adlerblick 7x50's and that difference would be quite marginal. Of course the Fujinon's do have a wider field, 4 degrees (66 degrees apparent) vs. 2.8 degrees (45 degrees apparent).

The Pentax 16x60 also passed my chimney test earlier in the day. A chimney at about 75 yards was magnified and found to be highly defined. Bringing bricks to the field edge, they remained well defined bricks. There was no distortion of shape of the chimney as it was slowly moved out of the field.

Getting back to nighttime testing, I found that my impression of the brightness of the background sky very closely matched what I saw thru the binoculars. It was neither too bright or too dark. The exit pupil of these binos is 3.75mm. This seemed perfect given my suburban location. I waited for Orion to rise and I evaluated the specified field of view, was the number inflated or accurate? I could just barely get the 3 belt stars in one field. I had perhaps a tenth of a degree left over, maybe 2 tenths. This correlates very well with the listed 2.8 degree field. These stars were more impressive with the Fujinon's 4 degree field at the same magnification. The Double Cluster in Perseus was impressive in the Pentax, but the wider field and greater light grasp of the Fujinons was clearly superior to the Pentax. Everything is relative however as the Pentax did a much better job than 10x50's on the same objects.

Being that the Fujinon's have some very real advantages, why get the Pentax? The Pentax are quite nice overall. They are also 1/3 the price. They are light, about 42-43 oz. as compared to about 75-76 oz., and they are ergonomically very hand holdable. They really perform very well. The Pentax eyecup is more comfortable than the Fujinon eyecup and the eye relief is better by a good margin (20mm vs. 14mm), this may be a very important consideration for those that have to wear glasses while observing. They are sharp virtually to the edge. A big advantage is the center focus and with focus lock. I do not like
using individual focus during the day. The larger objective size and exit pupil size of the Fujinon's is not necessary during the day.

Some may say - get Oberwerks for even less and get a wider field and greater aperture. This may be true. I have a friend that has the 15x70 Oberwerks, I will have to compare all 3. One knock on the Oberwerks that several have reported is shifting focus with pressure against the eye cups, this does not happen with the Pentax even with the Focus Lock not engaged. Bottom line - the Pentax 16x60's are great, versatile binoculars available at a very nice price. They will serve me well for both day use and astronomy.