I’ve been involved in amateur astronomy for some 25 years and have learned that quite often, a good pair of binoculars is indispensable, either as an adjunct to a telescope or, quite often, just used all by itself. I’ve had a variety of both binoculars and telescopes over the years, good and bad, and know their ins and outs fairly well by this time, but as far as binoculars go, I’d been limited to using binoculars in the 35mm to 63mm range, with my main pair being a good quality 7x50 pair. I had always been intrigued by giant binoculars, but never felt I could justify the money for them, but with the recent slew of Chinese made binoculars, the prices have gone down considerably, both for new ones, of course, but the used market seems to have been pushed down, too, whether they binoculars are Chinese made or not. When I came across a classified ad for a pair of used Japanese made Celestron 20/80 binioculars in what seemed to be fine shape for $120, I took the plunge. I’ve heard the current Celestron binoculars, while less expensive than they used to be, are now made in China—though I have some good Chinese optics, if I had to bet on whether a random Chinese optic or Japanese optic would be best, my money would go to the Japanese made optic every time, so I was glad to come across this pair. 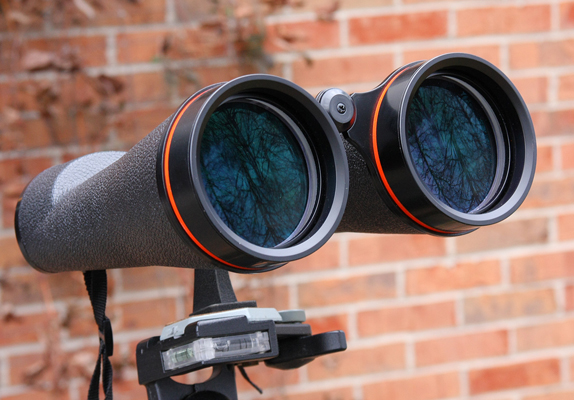 The binoculars arrived well packed and I was impressed by the size and quality of the case that came with them. I wouldn’t toss it in a lake or run over it with a truck, but it seemed as if it should put up well with some minor abuse. The first thing I noticed upon opening up the case was the smell—it really took me back. It was the exact same smell of the first decent pair of binoculars I used, a pair of 10x50, Japanese made Focal binoculars my parents got from K-mart when I was maybe 10 years old. Yes, K-mart actually sold some decent optical equipment back in the day. I suppose the smell actually comes from some material used in the case, but, to me, the smell is always associated with good quality binoculars. One of the scents of my childhood. 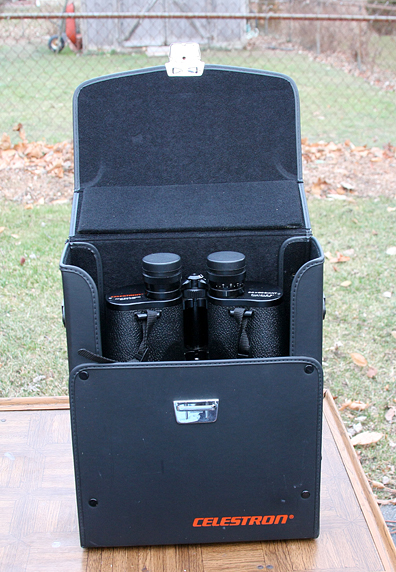 Once out of the case, the binoculars seemed very large, solid and substantial. The lens caps were all present and accounted for—not something you can take for granted when buying used gear—and fit snugly. True to their advertising, all of the air to glass surfaces I could see seemed well coated with dark green reflections indicated multi-coated surfaces rather than the blue reflections of single, MgFl coatings. A quick view showed them to be reasonably collimated, with later night-time viewing of stars showing the collimation to be spot on. These binos are of the center focus variety, with the right eyepiece correctible for any focus differences between the eyes. Both the center focus wheel and the right eyepiece diopter move fairly stiffly, as if there’s some thick grease used to dampen their movement, but this has really only proved to be a problem when I’ve used the binos out in cold weather. The binos feature a hard, pebbled gripping surface on the one piece bodies, which are hinged both near the focus wheel and at the objective end, though both ends are not attached by a stiff bar, as in some binos. I’m sure that would make them less prone to collimation issues, but since I haven’t had any collimation issues, I can’t really say the way these are made is inadequate. 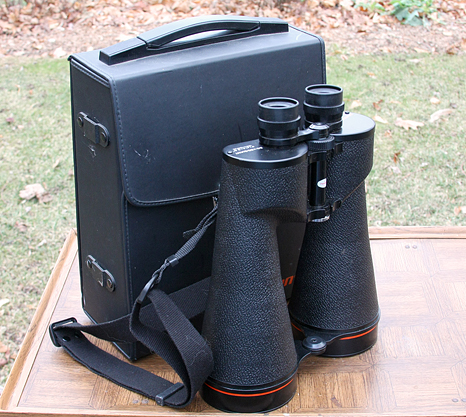 The binos claim a 3.5 degree field of view, which my nighttime observations have borne out. The prisms are of Bak-4 glass. The eyepieces are a wide field variety and have fairly close, though adequate eye relief—with the eyecups folded down and pressed up to my glasses, I can see the entire field of view without any problem. Unfortunately, the binos don’t feature quite enough focus travel to accommodate my eyesight without correction (-4.5 and -5 diopters), so I have to wear contacts or glasses while using them. With their size and weight, I’ve found they can be used only hand held only if my elbows are braced against something, and, even then, it’s hard to keep things really steady. As such, I’ve used them mostly mounted on a tripod with a decent pan and tilt head. This is useable as long as the elevation isn’t too high, but in the future I plan on something better, some sort of parallelogram type mount, perhaps, with a reflex finder, to help with aiming. 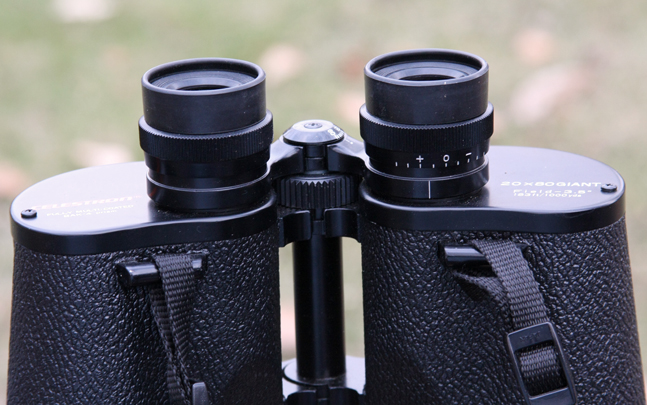 So how are the views? I’ll start with the bad and end with the good. Stars are, surprise, surprise, not pinpoints from center to edge, nor did I expect this. If you’re looking for it, they start to become noticeably misshapen around 70% towards the edge of the field with the last 10% being pretty obviously misshapen and not star-like at all. I expected that, though, and I find when my eyes are concentrated on the center of the field of view, I hardly notice, but I know that some are more sensitive to this than others. On bright objects, these binos magnify enough that you can see some chromatic aberration, too, but I never found that to be objectionable. That said, I’d rate the view of these binocular higher than a couple other Chinese made examples I’ve seen, so I’m happy with them optically. They do excel at what you’d expect, sweeping through the summer Milky Way, all the M objects visible and nicely shown with the relatively high magnification. If they’re held steady enough, you can also easily pick out the smaller objects, such as the Ring Nebula, M57 and I even managed to locate the Little Dumbbell, M76, though it appeared nearly stellar. It also shows off the very large objects, such as M31, M33, the Veil Nebula, the North American Nebula, etc, very well. Yes, there’s a limit with “only” 80mm, but using two eyes on 2 80mm telescopes seems to increase what you can see beyond just a single 80mm scope at 20x. For terrestrial viewing, they provide a very sharp, high contrast image that’s hampered only by the added inconvenience of aiming them accurately with their high power and relatively narrow field as compared to binos with half or less of their magnification. 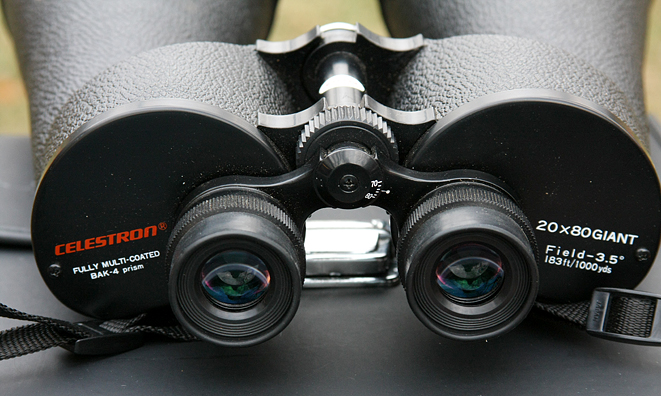 Though these exact binos aren’t available new anymore so far as I know, at least not under the Celestron name, I think they’d be worth seeking out on the used market as something a cut above the average Chinese made bino without running into the price stratosphere occupied by such big binos as Fujinons. You will need to factor in the additional cost of some way to mount them if you don’t already have something you can use, but I think they’re well worth it. 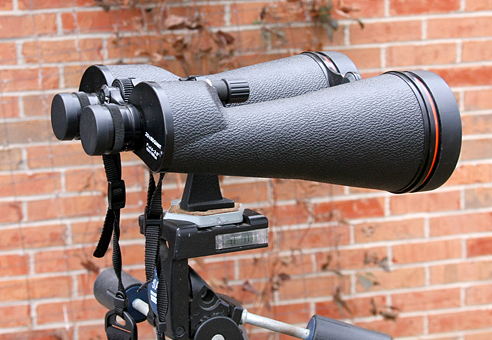