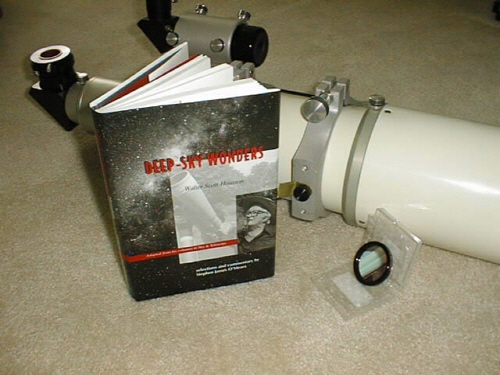 Perhaps you are entering the hobby of astronomy with a small telescope (2-6 inches) and are wondering if there is enough worthwhile activity for you to be challenged with such a scope? Or maybe you are a veteran deepsky observer that is wondering where the next frontier might be for your enthusiasm. Well, this book was the answer for me, and as many times as I've overlooked this book, I finally broke down and bought it as an act of desperation under endlessly cloudy Michigan skies.

This book is actually an anthology of Scotty's articles from past S&T magazines. Cleverly assembled and edited by James O'Meara, the editing is largely transparent and does not eclipse Scotty's presence at all. If anything, O'Meara's contributions merely clarify the context of certain articles to make them more compelling to the contemporary astronomer without changing the "feel" of the articles.

In this compelling collection, Walter Scott Houston captures a unique approach to observing the deep sky that is very different from the current crop of excellent columnists that grace the pages of today's magazines. In fact, reading Scotty's book takes you back to the days when larger scopes were 6-inch and the concept of a nebula filter was still very new. Because of this, Scotty makes you feel like part of his network of observer/readers, asked to push the limits of their small scopes and overcome the barriers of visual small scope use. He offers observing challenges for a wide variety of objects from different catalogs…not only the Messier and NGC.

You will be surprised, as I was, how many spectacular objects are within reach of smaller scopes even though they do not necessarily appear in the Messier catalog. His description of various attempts (some were successful!) at observing the Horsehead Nebula, California Nebula, Barnard's Loop and other difficult objects with smaller equipment make you want to rush out and try it yourself. In this regard, I found it refreshing to realize that this gentleman had accomplished years ago with a 4-inch refractor what many "armchair astronomers" on so many internet newsgroups maintain cannot be done. Also, he challenges conventional thinking about observing southern constellations and targets by making a reasonable case for successfully chasing objects in Fornax from 40 degree latitudes. Granted, the issue of increased light pollution over the last 50 years may greatly diminish your local capability, but with smaller scopes comes the option of packing your gear heading for darker sites and a fair simulation of the conditions that Scotty had in the 60's and 70's.

There is never any doubt in your mind as you read these chapters, that Scotty's prime observing tool is his eye, and the mention of different scope types and apertures is almost incidental and detached from the observing experience. Given today's endless (and in many cases pointless) internet debates over scope types and accessories, Scotty's approach is most refreshing and recharges your enthusiasm for just plain observing. Amusingly, Scotty even tries a plain cardboard tube with a blackened inner surface in an effort to see the Pleiades better. He admits that the experiment didn't work, but this venture certainly shows you Scotty's philosophical purity when it comes to visual observing. I did have one bone to pick with him however. He states that star hopping with a right-angle finder is almost impossible because of the mirror-image view. I am glad I didn't pick this up sooner from either his articles (I missed many in those days) or from this book, since that's always been my choice method of star hopping… I had no idea it was almost impossible!

This book gave me pause to reconsider where to direct my efforts as a visual observer after completing various deep sky observing projects. It gave me a new challenge to see if I could "expertly" revisit with smaller apertures the objects that, in many cases, had cost me several hours and even entire evenings of searching with larger scopes. Indeed, the chase is sweet, but never so sweet as to find objects by depending primarily on the eye's acuity and one's observing skills rather than on brute force aperture.

I am very pleased with the book and would recommend it as one that you will likely read over and over again. It is certainly a fantastic gift idea for your favorite astronomer, regardless of their specific interest or pursuits.