Tristan Schwartz is an amateur astronomer with 19 years experience and 3 scopes owned. No financial stake in any companies mentioned in this article. 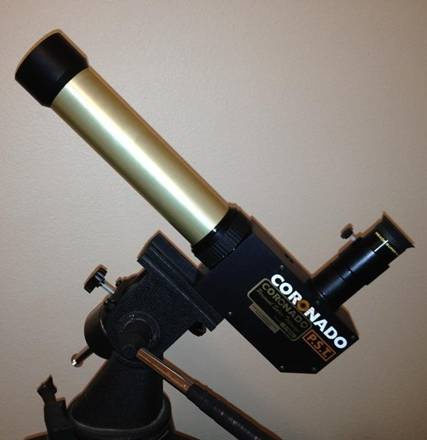 My first taste of H-alpha happened in the summer of 2002, and it was a sight that I will carry with me until the day I die. Being able to see real solar prominences through that little Coronado Helios-1 scope was the beginning of an unstoppable addiction to solar astronomy. Over the next decade I did my best to sate myself with white light filters and the occasional glimpse through a club member's H-alpha rig, and I fought to keep temptation at bay; the temptation to buy an obscenely expensive telescope that can only be used to observe one object.

Fighting temptation only lasted until I was made an offer I couldn't refuse; purchasing an almost new Coronado PST from a member of my club for only around half the going rate.

This individual had once owned a PST from one of Coronado's earliest production runs. It eventually succumbed to the dreaded "PST Rust" and it was sent back to Meade for repair. Meade replaced the objective, shipped it back out and... it never arrived. Tracking info on the package just ended halfway to the destination and this led to months of Meade and the shipper working to find it, an ultimately fruitless search.

During this period, my clubmate got impatient and ordered a Lunt 60. Ultimately Meade was reimbursed by the shipper and sent him a brand new (Made in Mexico) PST, which was now utterly superfluous. It is unknown if this unit was hand-picked by Meade prior to shipping out. He put the scope up for sale at a recent club meeting for a DEEP discount, and I snatched it up. One can only resist temptation for so long...

Now that I've had a chance to thoroughly put it through its paces, I wonder how I was ever satisfied with only white light filters.

First of all, the scope was much lighter than I was expecting. While made of solid, well put together metal, the scope is still a featherweight. The case is so light with the PST inside that one could be easily tricked into thinking it's empty. As for the case itself, I have serious doubts that it could withstand the rigors of airline baggage handling, but for road trips it should be more than adequate. The case simply accepts the pre-cut foam interior of the original shipping carton which provides a snug fit for the telescope. Truth be told, I found the fit a bit TOO snug. I immediately took a razor knife to the foam to make it easier to get the scope out of the case. The image below shows the PST in the case after making a few cuts for easier removal and to accommodate the future addition of an upgraded focus knob.

While older PSTs I've seen have a screw-on metal lens cap, this one has a plastic "squeeze button" lens cap of the type frequently seen on cameras. The objective lens coatings have a deep blue tint and the etalon assembly can be seen down inside the tube.

The PST includes a 20mm Kellner eyepiece. When I first arranged to buy the scope, the president of my club told me this eyepiece was "The best doorstop in the world." Sure enough, I couldn't imagine an eyepiece worse suited to the PST. The effective apparent FOV when used in the scope appeared to be around 25 degrees and the magnification was only 20x, giving far too little image scale to see any detail whatsoever. The housing is also chintzy plastic in stark contrast to high build quality of the telescope. I would almost rather Meade didn't include an eyepiece than to ship such a great scope with this abomination. Indeed, the logic of including a cheap eyepiece to make a telescope appear more "complete" eludes me in this case. Almost any amateur astronomer who would spend hundreds of dollars on such a highly specialized piece of equipment likely has a slew of eyepieces at their disposal. Also, considering the fact that the PST is sold without a mount, any attempt to make it look like a "complete" system by including a useless eyepiece is deeply flawed. This doesn't really detract from the PST, but this move on Meade's part just doesn't make any sense to me. Whatever!

From a mechanical standpoint the scope is good but not quite superb. The tuning ring is a bit stiff and so is the focuser. The tuning ring is still easy enough to adjust, but the focus nubbin (one can hardly be expected to call it a "knob") is so small and difficult to adjust that focusing can be a real pain. I definitely see an improved focus knob from Criterion Machining in my future. I've tried this accessory on another club member's PST and it makes focusing MUCH easier. If you go this route you will need to make further cuts to the case's foam as shown above.

The PST's built-in Sol Ranger finder is utterly ingenious, but imprecise in its implementation. When the sun was centered in the eyepiece, the bright dot was decidedly off-center in the Sol Ranger window. This is not a major issue, as you just have to remember where on the window the centered spot is and mark it. Indeed, after less than half an hour of use, compensating for the off-center finder became second nature. By combining the "minimize the shadow" technique with the sol ranger, getting the scope on target is an absolute breeze.

Having looked through quite a few PSTs over the last few years, I have noticed that they can vary quite a bit from unit to unit in two areas; ghost images and focus shift. I'm happy to report that my scope is utterly free of ghost images and has only a small, insignificant amount of image shift in the focuser. I don't know if this is merely an above-par unit or if QC at Meade has improved.

Now to the nitty-gritty brass tacks; what was the view like? Utterly fantastic. The scope clearly has a "Sweet spot" in the field of view as a result of using a tilt-tuned etalon. In practice this is rarely a distraction. Indeed, I find I'm constantly adjusting the tuner to highlight different types of features anyway. Tuned to one extreme it gives a view reminiscent of a white light filter showing sunspots. Towards the middle prominences are bright. At the other end surface detail is higher in contrast but the prominences all but disappear. Using the tuner in this way while observing quickly becomes second nature. Filaments had sharp contrast against the disk. Plage brightness was intense at times and granulation was readily apparent, as were the swirling patterns around active areas. Delicate curlicues of prominences stood sharp against a deep black background. This PST wound up having far better black sky contrast than some others I have looked through. The scope also held up to magnification better than I was expecting. Using a barlowed 9mm Plössl eyepiece gave a hair under 89x, right at the theoretical limit of the scopes maximum magnification range. The image still held up very well and revealed the faintest hint of spicule detail on the limb. Pushing the magnification higher made the brightness and quality sharply fall off the cliff. Still, not bad for only 40mm aperture! The default magnification I quickly settled on was 47x provided by a 17mm Plössl and a 2x Barlow. This combination yielded a very pleasing view with good eye relief.

Compared to higher-end instruments (specifically a club member's pressure tuned Lunt 60 with double stack), the PST naturally falls short on brightness, contrast and ability to take magnification. The PST also has noticeable astigmatism compared to the Lunt, likely due to the smaller scope's pentaprism focusing system. However, the PST beat the Lunt in one area; sky background contrast. The Lunt had a tendency to have a gauzy glow around the solar limb whereas the PST had a deep black sky background. The (mostly) improved view in the Lunt was hardly surprising given the greater aperture, pressure tuning and MUCH higher price tag. However, the PST held its own far better than I ever expected it to and even in absolute terms the views were exceptional. The fact that the PST can also be double stacked down the road makes it very appealing as a beginner instrument.

Being primarily a visual observer and not an astrophotographer, I can't really speak as to the quality of the PST as a tool for imaging, but I was able to take a few basic afocal shots using my iPhone and roughly processed with Adobe Photoshop Express for iOS. The results were promising! The following pic was obtained using an Orion Steadypix adapter for iPhone. 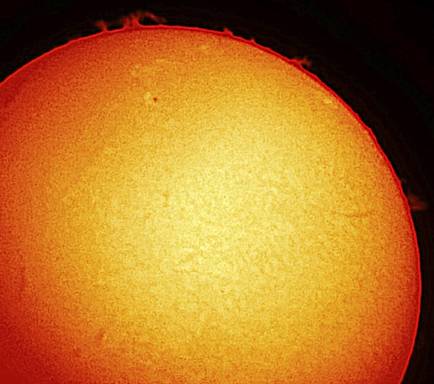 Not professional results by a long shot, but not bad for a first time attempt at solar imaging.

Watching the changes in active areas and prominences from minute to minute is entrancing and utterly addicting. The PST has quickly become my most used telescope. In spite of a few quirks, the combination of utterly dramatic views and overall user friendliness makes the PST an absolute breeze to operate. It takes all of the guesswork out of H-alpha observing at a price still within the reach of an astronomer on a budget.

What I liked:
Easy to use
Awe-inspiring views
Light weight
Clever finder design

What I didn't like:
Terrible included eyepiece
Off-center Sol Ranger
Tiny, difficult to use focus knob

Bottom line: Every amateur astronomer needs one of these!