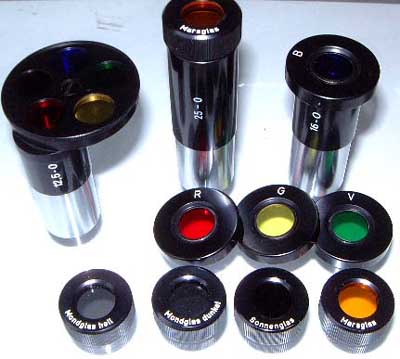 My introduction to these wee eyepieces was my first peek through my newly acquired APQ 100/1000 refractor in 1995. The telescope included a 10 and 6 mm orthoscopic. Saturn in good seeing greeted me through the 6 mm(166X). I remember distinctly exclaiming”WOW”. Over subsequent years I was able to acquire a full set of this design. The set which I am reviewing are the later versions with bakelite eye cups which Zeiss Jena sold throughout the 80’s and early 90’s. The set comprises the 4, 6, 8, 10, 12.5, 16, 25 and 40 mm oculars. All except the M44 threaded 40 mm have 0.965 inch(24.5 mm) barrel diameters. Apparent field of views are all around 40 degrees. Zeiss also made crosshair and various inserts for variants of this design. I am reviewing the non insert standard versions.

This now famous orthoscopic design originated from Zeiss. Ernst Abbe was a physicist who worked for Carl Zeiss during the late 19th and early 20th centuries is credited with creating this design in 1880. It consists of a triplet cemented field lens and a single eye lens. Four elements of glass. The orthoscopics reviewed are fully coated with magnesium fluoride giving the lenses a purple hew. During the early to mid 1990’s a 1.25 inch version of these eyepieces superseded the 0.965 inch design. The 1.25 inch Abbe’s were designed to work with the faster APQ refractor objectives 100/640, 130/1000 and 150/1200. The 1.25 inch Abbe’s are widely acknowledged as the finest planetary eyepieces ever made. Today the 1.25” Abbe’s command $600 per eyepiece second hand. So how do the 0.965 inch Abbe’s perform? 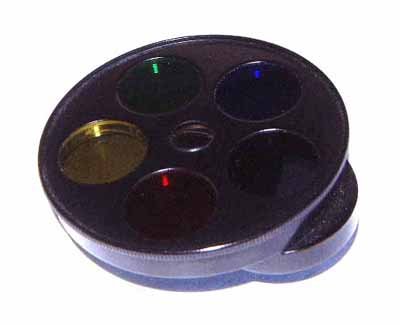 In my f-10 Zeiss APQ 100/1000 refractor the eyepieces produce sharp contrasty views right to the very edge of the 40 degree field of view. If I turn the RA drive off while observing Jupiter, Jupiter is tack sharp until it leaves the field. In my f 7.7 APQ 130/1000 the performance is of the same standard for about 90 % to the edge of the field.

The 0.965 oculars were originally intended for Zeiss C and AS objectives. These objectives were generally f-10 to f-15. One noticeable effect with the Zeiss orthoscopics is the way they seem to cut back chromatic aberration in achromatic refractors when compared with other designs e.g.other orthoscopics and some plossl’s. While this is probably the effect of not adding chromatic aberration rather than reducing it I readily notice it especially in achromatic refractors. When I owned a 6 inch f-12 D&G I compared the Zeiss with several Clave plossl’s, University optics orthoscopics and other eyepieces and each time my eye perceived the on axis false colour was not as noticeable with the Zeiss orthos.

I also own newer Televue plossls and have tested them with the Zeiss orthoscopics. The orthoscopics are sharper and as revealed in a recent planetary eyepiece summary do indeed produce cleaner whiter images of the planets and moon. They(the Zeiss orthoscopics) also have less scatter. The wider view of the Televue’s is nice but for higher power applications I always reach for the Zeiss orthos. In really critical viewing the Zeiss have the ability to offer a hint more contrast when compared to the Televue Plossl’s. .

Before opting for the full set of Orthoscopics I tried a few other designs in the hope to get equal or better performance for less cost. One mistake I made was to try a Nagler 4.8 mm. The view of the 4.8 mm Nagler with the APQ 100 (208X)pailed in comparison with the view with the 10 mm orthoscopic with 2X Barlow(200X). I tested them several times in excellent seeing on all manner of objects from the moon to double stars. There was a noticeable loss of contrast. It was as if the Nagler was fogged up or really dirty. On another occasion I compared a 18 mm radian with a 2.5 X powermate with the Zeiss 16 mm and 2X Barlow. The radian/powermate again fell short in terms of contrast.

While I love the orthoscopics they do have one or two failings which I will briefly discuss. Firstly the field of view of 40 degrees is quite narrow for viewing extended objects. Next the eyelenses are placed in such a way to prevent using glasses with these eyepieces. Although they are designed for higher powered viewing with a narrow exit pupil where eye aberrations should be at a minimum.

Another failing is the lack of a thread to receive commonly used filters. 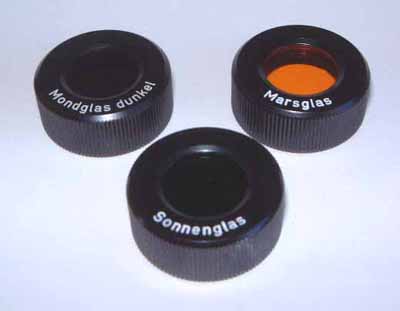 Snap on and screw on Schott filters were available to be used with the orthoscopics. A thread on the eyecup unscrews to allow use of Schott filters. I have been very fortunate to have been able to purchase a good selection of these filters before Zeiss went out of amateur telescope production. 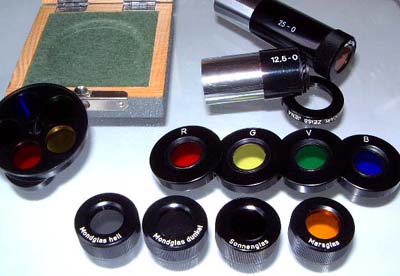 The larger 40 mm M44 threaded orthoscopic is extremely heavy and not par focal with the other orthoscopics. It also has a crosshair. The remainder of the orthoscopics are par focal to within a few mm.

Another failing with the 4 and 6 mm orthoscopics is a lack of eye relief. The eye relief is however about the same or slightly longer than the focal length in all 0.965 “ Zeiss orthoscopics. I have still found them comfortable to use when viewing planets for long periods of time.

The 4 to 25 mm orthoscopics approach par focalness for want of a better word. Zeiss achieved this by adjusting the length of barrel and distance from eyepiece elements to barrel stop.

Zeiss 0.965” orthoscopics were designed to match the high standards of the refractor objectives the company manufactured. Consistently the achromatic C or short flint semi apochromatic AS objectives had strehl ratios well over 95% in yellow green light. The focal ratio of these objectives were typically f-10 or higher. Essentially the 0.965’s have no visually discernible aberrations across the entire field of view in these telescopes. Planets are sharp to the very edge of the field. It is this alone which makes these oculars so sought after. If the best possible contrast and resolution is required then they are hard to beat. Also having four elements and four glass to air surfaces the Zeiss ortho’s have a distinct advantage over multi elemented designs. Less glass equals better contrast its as simple as that. Zeiss also went to great pains to polish all elements to achieve extremely smooth surfaces reducing scatter.

Another advantage is their relatively long eye relief as compered to a typical Plossl with a 50 degree field.

A couple of years ago a friend used a f6.5 synthetic triplet fluorite objective to image a piece of graph paper(black with a white background) illuminated by sunlight from a distance of approximately 20 m. All manner of eyepieces were used to view the page. Field curvature, distortion and lateral chromatic aberration were all observed in most common brands of eyepieces. One fellow present put his 6 mm Zeiss ortho to the test. It was clearly the best from all other oculars for this crude test. It beat out some illustrious brands including Pentax orthos, Celestron ultimas and one or two Clave plossls. One of these days I will repeat this experiment. Unfortunately at present all of my objectives are f 7.7 or slower. 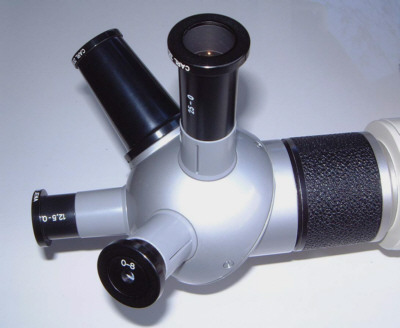 I really only use these orthos for high resolution and their inherent contrast. That is the strength of the orthoscopic design. For medium sized refractors then the 4 to 10 mm ortho’s are thus the most useful. The difference in mass between the 4 mm and 25 mm is not huge enough to make rebalancing the ota necessary. This is an important issue with a refractor where the ota is invariably slender.

I find I use the Televue’s more for medium powered observing where the wider field of view is a real bonus. The 8 mm Televue while an excellent eye piece does not quite have the eye relief of the 8 mm Zeiss.

Eye relief figures used below are estimates only.

This has only about 5 mm of eye relief. It is better in terms of the all important contrast than other 4mm orthoscopic ocular I have used. I have owned several others.

A favourite with the Zeiss APQ’s. It delivers 166X which is optimal for Mars and Jupiter in good seeing with the 100/1000. Eye relief is about 7 mm. A lovely often used ocular.

A superb eyepiece with Jupiter/Venus in average seeing. Also a favourite with double stars. Outstandingly sharp and very rare, not many were made. Comfortable eye relief of about 9 mm.

If you are going to own one of these oculars this one is the pinnacle of the design. Eye relief is extremely comfortable. Perhaps 11 mm. With APQ 100 and Barlow this ocular has delivered views of Mars, Jupiter and Saturn that were etchings in excellent seeing. This is my most often used ocular.

mm Possible not quite as sharp as the 10 although the focal lengths of my scopes do not readily allow its use for high power work. Still made to exacting standards. Eye relief is about 14 mm. Extremely comfortable view.

This eyepiece again gets lots of use as a medium power eyepiece. Eye relief is around 18 mm. Lovely for clusters with a beautiful back ground sky despite its shortfall of a narrow 40 degree field of view. I use this eyepiece a lot with my Zeiss Telementor 63/840.

bautiful contrast. Again a narrow field. NGC 4755(Jewel Box) with this eyepiece is beautiful in the APQ’s. Reasonably heavy.

Rarely used. Has M44 threads and a crosshair which can be a distraction. Perhaps the ultimate finder eyepiece for a refractor used as a finder on the side of a large Cassegrain. Excellent performance across the field of view. Quite massive at about 420 grams.

No eyepiece is a best fit for all telescopes and observing. The Carl Zeiss Jena 0.965”orthoscopics are however an outstanding design that works perfectly for higher powered viewing with longer f-ratio telescopes. The field of view is limited at 40 degrees. The aberration free high contrast views are the positive trade-off. If you want the very best contrast for lunar or planetary observing then consider these wee gems. They can often be picked up in Germany used for under $100US.

I would say this is especially true if your telescope has excellent optics.