I'm not a Nagler fan, to put it bluntly. Though they are marvels of technology, the ones in this focal length range are more like counterweights and the costs are “astronomical.” As I have come to realize after trying many of them, despite the relatively flat fields, I can still see the natural coma of my f/4.5 scope. That means to get a totally flat field, I’d have to spring for a coma corrector, which adds more money and more air-to glass surfaces to worry about.

I have nothing against those that spring for Naglers and other high-end eyepieces, I just don’t see the bang for the buck with them. Because of that philosophy, I prefer the more reasonably priced oculars, and there are plenty to choose from, some good, some really bad.

The Orion Q-70’s are not only reasonably priced, but they come with 2” barrels, which was my original reason for wanting them in the first place. I have been attempting to convert all my eyepieces to 2”. In the end, it didn’t work out that way, but for a good year, the Q-70’s were my primary eyepieces.

I got the whole Q-70 set for Christmas in 2007. I have had a chance to put them through their paces on many occasions in 2008 and 2009 and have learned their ins and outs. The 2" format really helps but the big thing for me is the wide field of view. They are basically a modified Erfle design with 5 or maybe 6 elements, not too many to suck away the faint light I live for. Sure, the edges have a lot of coma, or as I like to call it, the fishbowl effect, but the majority of the field gives excellent images. These eyepiece are great for sweeping, or "mowing the lawn" as I look for faint galaxies. Even at the extreme edge, I could tell the difference between the blur of a star and the blur of a galaxy, and was able to nail over a dozen Herschel 2 galaxies the first night I tried them.

The one I use the most is the 26mm so I will start with it first. In my 16” f/4.5, it gives me a magnification of 70X and a true field of almost 1 degree. It is outstanding for sweeping for faint fuzzies. With it, I have identified several hundred faint galaxies, nebulae and star clusters.

I don’t use the 32mm as much because it wastes some exit pupil, but when I want a larger sweep, the 57X magnification it works great.

The 38mm, at 40X, is my favorite on the double cluster and also the Veil nebula. With an O-3 filter, it shows more of the Veil than any other eyepiece I've ever used.

After careful examination and by trial and error, I found all three perform about the same. The usable area is about 70% of the field. The stars are pinpoints in about 50% of the field, but when looking at an object larger than the central part, you can play with the focus and get the stars relatively sharp over the whole 70% area. Also, because the field is only 70 degrees, the natural coma of the scope is not as noticeable. However, the field is far from flat at the edges. At the 70% zone, the stars lose focus and flare out.

The contrast, especially in the sweet spot in the center, is outstanding. I noticed it in particular when I viewed the Horsehead nebula for the first time in years. There was no mistaking it. The Orion nebula was breathtaking in its complexity, especially with the 26mm.

Each eyepiece works great with a Barlow. I use a Parks 2” unit and there is nothing about these eyepieces that detracts when using it. In fact, the field becomes flatter.

The fit and finish of each unit is also outstanding. For their price, these are well-made and solid oculars. Each threaded for filters, I have yet to have a problem screwing in any 2” filter I have. Each unit, especially the 38mm are solid and you know you are holding some serious glass. Yet, they are not just an expensive counterweight.

The coatings when I received them were flawless. They have a purplish tint to them.

Another big feature I really appreciate is that the 2” barrels do NOT have one of those stupid safety grooves. Because of that, one would have more leeway when, and if, the focus is not quite there. You can slide them out a bit if your low-profile focuser will not travel out far enough.

Each unit comes in a nice solid cardboard box, along with a lens cloth and tought plastic caps for both ends. They are truly quality units.

As I’ve said, these eyepieces aren't perfect, as in a super wide flat field. But for my money, they don't need to be. They do everything I want in that focal length and didn't break the bank to get there. For those of you new to the hobby, don't let the ad copy in the magazines bamboozle you into taking a second mortgage just to buy one of the high priced oculars. Invest less than the cost of a Nagler to get the whole set and still have something you can really use. For the budget-minded person that wants bang for their buck, I highly recommend them. 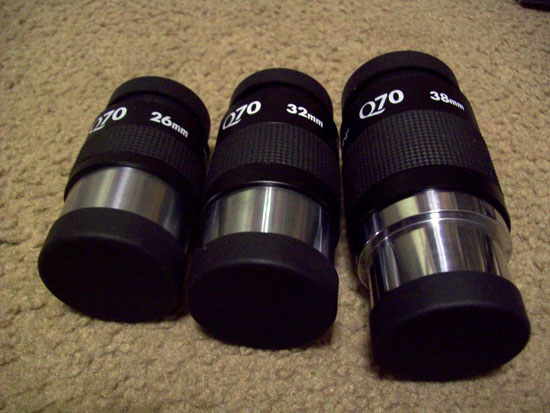 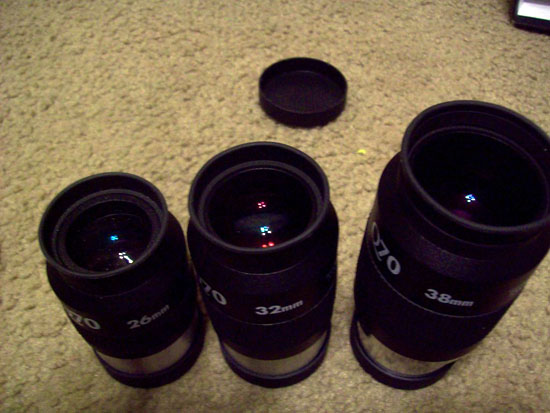 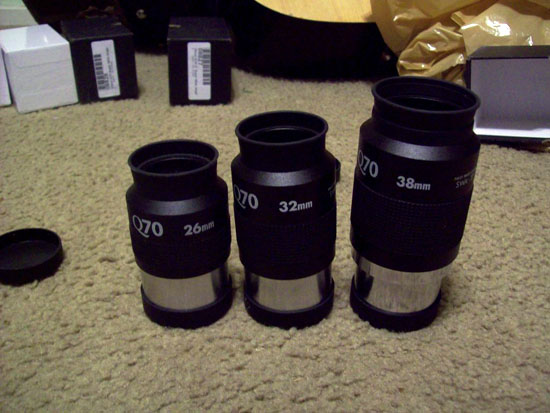