Impressions of Performance in an f/4.9 Newtonian (203mm Aperture) 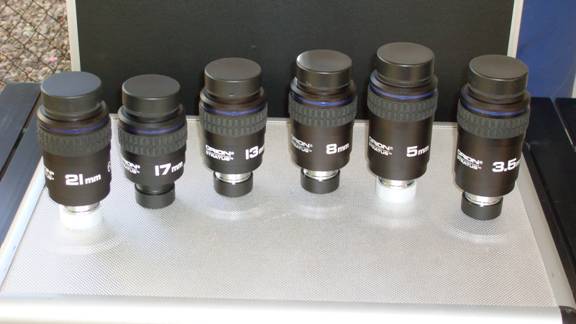 When I returned to amateur astronomy in 2003 one of the first things to impress me was the general obsession with apparent fields of view – the wider the better. At first I thought the interest was driven by users of Dobsonian mounted reflectors, who would obviously want a wide field of view to keep an object visible as long as possible. I purchased a telescope on a motorized equatorial mount and assumed wide fields of view would be a moot point. This conclusion held until I finally looked through a wide field eyepiece and discovered that I understood only a part of the appeal. The beauty of an object observed in a wider setting by itself makes these eyepieces worthwhile. Unfortunately, the ones that worked best proved too expensive for my budget, while their less costly counterparts performed poorly in my f/4.9 Newtonian reflector. At the same time that I understood their worth, I seemed to be priced out of the market. I kept my eyes open, though, hoping to one day find a moderately-priced wide field eyepiece that offered a reasonable compromise between cost and performance.

Then Baader introduced the Hyperion series and Orion brought out their Stratus eyepieces. The early reviews of both were promising, and the prices fit my budget, so I decided to take a chance. Since I have a local astronomy store available that sells Orion’s products, and online discussions of the two brands revealed no fundamental differences between them, I took my business there and selected the Stratus line. Soon I owned a 21mm Stratus and was very pleased with the investment. Over the three years that followed I acquired all the Stratus eyepieces except the 24mm, a focal length that I would seldom use. The Stratus eyepieces have become my basic eyepiece “toolkit,” and I have used them for every form of telescopic observation except solar. 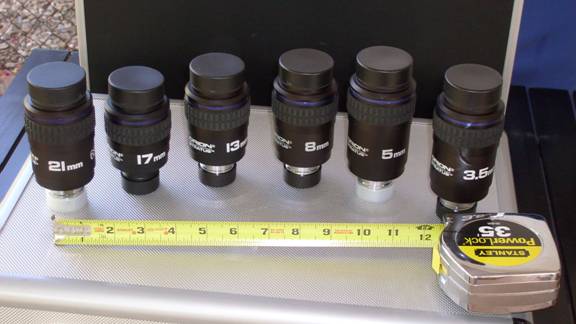 While the Stratus eyepieces are not gigantic, they have some heft to them, averaging 14 ounces (395 g) and ranging in size from 3.5 inches (8.9 cm) to 4.5 inches (11.4 cm) in length. All are about 2 inches (5 cm) in diameter at the widest point. They feel solidly made, and their surface texture makes it easy to hold and handle them securely. The nose piece features a “safety” groove that annoys many eyepiece aficionados, but has yet to prove troublesome in my case. Orion advertises these eyepieces as compatible with both 1.25 inch and 2 inch focusers, and they do in fact work with both. However, the “skirt” on a Stratus eyepiece that fits into a 2 inch focuser really is a bit short for comfort. Although I suffered no mishaps I was never quite convinced that the eyepiece was held securely enough. Finding no real advantage to using these eyepieces in 2 inch mode, I just leave my 1.25 inch adapter in place. Eye relief – which has become for me one of the most important features of this line of eyepieces – is rated by Orion at 20mm for all the focal lengths. I have found them equally easy to use with or without eye glasses. If I observe while wearing glasses I roll down the rubber eye guard; without glasses I leave the guard up, as it simplifies eye placement.

The three year period of acquisition provides an insight into the consistency of quality control with regards to these eyepieces. Although they surely came from very different batches over that span of time, the overall performance of the eyepieces remained the same.

The longer focal lengths (13, 17, and 21mm) are not sharp from center to edge in my f/4.9 Newtonian, but considering the telescope I use, this is not much of a surprise. Coma begins to show in the outer 15% to 20% of the field of view in the 21mm and 17mm versions, and the outer 10% in the 13mm. Coma to a degree that I find truly objectionable (YMMV) does not appear until the outer 10% to 15% of the 17mm and 21mm eyepieces. I have not noticed coma in the shorter focal lengths. Careful examination revealed a bit of astigmatism at the extreme edge of the 21mm, and possibly the 17mm as well, but unless I deliberately look for it, this astigmatism does not stand out. I was not able to spot any astigmatism in the shorter focal length eyepieces. The two longest focal lengths I use display some pincushion when tested in daylight, but do not show this distortion in a bothersome way when used for astronomical observations. Under dark sky conditions that allow a fair assessment of contrast, all of these eyepieces show nice dark sky with stars that stand out sharply. Observations of bright stars and double stars with notable color contrasts show that the color fidelity is very good. For example, Albireo’s components are yellow-gold and blue to my eye, well within the range of colors described for the pair. When observing the Moon you are likely to see some color fringing with the longer focal lengths, but only when the Moon drifts to the edge of the field.

Different people react to the above general characteristics in different ways, and with varying degrees of tolerance. What I describe as coma in the outer quarter of the field of view might not seem to qualify as such to some, and be a deal killer for others. The described effects are there if I make a point of looking for them, but do not leap out at me while I make observations, allowing me to enjoy the view provided by these eyepieces.

Among the comments I’ve seen regarding these eyepieces have been a few complaints of a loss of contrast around the edge of the field of view, especially in the low power versions. Sometimes the phrase “ring of fire” is used to describe the phenomenon. In fact, when you look at the edge of the field of view in a Stratus eyepiece you will see this loss of contrast as a vague zone of not-quite-black sky when compared with the bulk of the field of view. As is true of the other imperfections, I do not notice it unless I deliberately look for the zone. The affect is subtle, and using the phrase “ring of fire” to describe it is an overstatement.

Stratus eyepieces are not specifically designed for planetary observing, but on such targets they perform very well. Planets viewed through the Plossls and orthoscopics I own are somewhat brighter than when seen through a Stratus, but the difference is modest. This difference in brightness is for me out-weighed by the comfort provided by the eye relief of the Stratus. Planetary observing is a patience game; the longer you look the better the chance that you will capture a fleeting moment of steady air that brings small details into view. I find that I cannot do this comfortably with short focal length orthos or Plossls. With the more generous eye relief of the Stratus eyepieces I am able to settle in for longer periods, and as a result find that I get much more out of planetary observing.

Much the same can be said for observations of the Moon, and to that can be added a greater appreciation of the Moon as a landscape. The field of view of even the shortest focal length Stratus eyepiece brings plenty of lunar real estate into view. I do not simply get a good look at Copernicus or Tycho while using an 8mm or 5mm Stratus. Using these eyepieces I can see such features in the wider context of their places on the face of the Moon, but at a high enough magnification to study the feature in detail (seeing conditions notwithstanding).

I mentioned briefly observing double stars to illustrate color fidelity. The Stratus eyepieces serve very well for double star observations, often setting these gems in beautiful star fields that might otherwise be missed. The same can be said of using Stratus eyepieces on deep sky objects. These eyepieces have worked well for me on all the DSOs I’ve tracked down, with open star clusters in particular benefiting from the 68° AFOV, which gives them room to stand out more distinctly against star fields. Good contrast, combined with the wider field of view, provides (to my eye) an improved view of objects fainter and fuzzier than star clusters (as compared to the Plossls I’ve used in the past). Both the 21mm and 17mm focal lengths are very useful as finder eyepieces.

The impressions presented to this point derive from an uncorrected f/4.9 Newtonian reflector, and I have described my experiences with these eyepieces in such a configuration because that is how most Newtonian owners I know would likely use them. (I have no experience in dealing with these eyepieces in refractors or SCTs.) I have, since acquiring the Stratus eyepieces, added a Paracorr to the kit, and now rarely observe without it. Using this device with the Stratus eyepieces has given me a much better sense for their quality. The 21mm and 17mm Stratus eyepieces in particular show a great improvement in the Paracorr, becoming sharp almost from edge to edge. Stratus eyepieces, when used with the Paracorr, approach the quality of view I have seen in much more expensive eyepieces, making coma correction a very worthwhile investment.

If you have a moderately fast Newtonian reflector and feel in need of something in the way of an eyepiece upgrade, but don’t want to wear out the credit card too quickly, consider Orion’s Stratus eyepieces. Their generous eye relief and overall good performance have made them my general purpose eyepieces. These eyepieces are not equal to their high-end counterparts, as some would have you believe. But then, for my purposes they do not need to be. What I sought was a reasonable (and necessary) compromise between price and quality that would increase my enjoyment of visual observing. In the Stratus eyepiece line, I found what I needed.