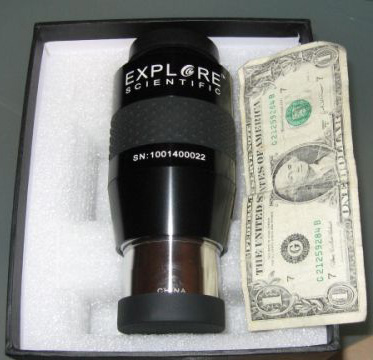 Most amateur astronomer would agree that Televue has set and been the gold standard in premium quality wide field eyepieces, offering superbly crafted, well corrected, flat field, chromatically sound eyepieces at a premium price. Al Nagler and company have consistently produced eyepieces that amateur astronomers have used for comparing all other eyepieces to. So, it should come as no surprise that when Explore Scientific introduced its 14mm 100 degree eyepiece to the world of amateur astronomy that it would be compared to the 13mm 100 degree Televue Ethos.

However, before we get into all of that let me say that this is a review of a premium 100 degree AFOV eyepiece and that although I purchased the ES 14mm, I also own the 4.8mm and 7mm Televue Naglers as well as the University Optics 32mm MK-80 and 25mm MK-70, in addition to the 8mm and 3.5mm Orion Stratus eyepieces. So, I can honestly say that I do not have any particular preference to one brand over another. Like most amateur astronomer, I purchase and use those eyepieces which give the most pleasing views for the price I can afford.

Now let’s get to my initial impressions; the ES 14mm is a large 2 inch eyepiece that weighs 2 lbs; it has a clean ergonomic overall design that fits nicely in your hand with a wide nubbed rubber grip band that provides for confident handling. Since the ES 14mm is advertised as being nitrogen purged and waterproof, I should probably mention that this is feature has merit, promotionally it makes the eyepiece unique, but more importantly by sealing the eyepiece and purging the air with a dry inert gas like nitrogen it should increase the life of the coatings and prevent dust or condensation from forming on the interior surfaces and elements. The eyepiece comes package in a sturdy box lined with high density die-cut foam that holds the eyepiece firmly in place during shipping; both ends have dust caps that fit securely. The rubber eye-guard is rolled down when the dust cap is attached. The 2 inch barrel is smooth but slightly tapered narrower at the housing end that should provide a little assurance that the eyepiece will not accidentally slip out of the focuser. Each eyepiece has a unique serial number and comes with a mail in registration form for its 5 year transferable warranty. Upon close visual inspection I found it to have no defects, scratches, or fingerprints, the elements are fully multi-coated as advertised and there was no visual flaws noted. I mention these facts in detail to illustrate the care and high quality attention to detail that Explore Scientific takes.

I purchased my ES 14mm from Astronomics out of Norman, OK from non-other than Pete Kron, who incidentally is the original builder of my 18” f/4.5 truss-tube Dobsonian. As you all know, anytime one purchases something for our astronomy hobby (addiction, obsession …) the weather gremlins send you cloudy skies. This time was no exception, almost immediately after I hung up the phone with Pete our weather here in SE Michigan began to change from clear skies to cloudy, raining and windy. But here in Michigan we have a saying, “if you don’t like the weather, wait a minute and it will change.” So, I waiting and after a few days the skies threatened to clear, well at least clear enough to do a little initial testing. As it turns out, my good friend and observing buddy John Causland was having a picnic party on Friday, July 3rd at his house to watch the fireworks his home owner’s association puts on to celebrate Independence Day and new eyepieces. (Okay, they didn’t know about my new eyepiece) John owns a 24” f/4.5 Starmaster and as luck would have it a 13mm Televue Ethos, that we will use to do some side-by-side comparisons with. After the fireworks, a small group of my club (The University Lowbrow Astronomers) gathered around my 18” f/4.5 a.k.a. the PK-457 to put the new eyepiece thru its paces.

Before I get into the results of our testing I need to point out some caveats; first of all none of us are optical designers or engineers, we are simple but experienced amateur astronomers that have looked thru enough scopes and eyepieces to know what to look for and what we like. Secondly, these initial tests were conducted under less than ideal conditions, the skies were rather hazy (7/10) and somewhat unsteady (7/10) and with a moon that was 4 days from being full. But since both eyepieces would be used under the same conditions I feel that any comparisons are still valid.

Prior to these observations under the night sky, we did take the opportunity to do a little day light testing of the ES 14mm in Jim Forrester’s 4” f/6.5 Astro-Physics Apo. We focused on some power lines a few hundred yards away. The first thing I noted was that the entire length of the power line was spot-on in-focus across the entire field, everyone concurred. The next thing I looked for was any fringe color or hint of it, there was none, and again everyone concurred. Jim mentioned that the power line which was running horizontally thru the FOV appeared to be curved, I pointed out that the power line did sag a bit on its own, but Jim thought that it appear more curved than it should. So, to test if the ES 14mm was causing this I nudged the scope a little bit to put two power lines in the FOV, one of the power lines running thru the top half of the FOV and one running thru the bottom half. If there was any field curvature (like a fish-eye lens would produce) the power lines should show different amounts of curve, there was no difference visually evident in the two power lines, both had the same sag, and Jim concurred.

Okay, lets move on to the night sky testing, as I said before the sky conditions were not the best, but here in SE Michigan you have to take what you get and make the best of it. Due to these less than perfect conditions we confined our testing to brighter objects. The side-by-side comparisons of the ES 14mm to the Televue 13mm Ethos were blind to everyone one but myself and we only used the PK-457 scope for our testing. We tested with and without a Paracorr and the consensus is that neither eyepiece needed the Paracorr. Our test targets included the Moon, M13 and M11 here are the results and impressions. Tester involved were Jim Forrester, Mike Radwick, Charlie Nielsen, Chris Sarnecki, Dave Snyder, Paul Walkowski, John Causland and myself.

Both eyepieces showed an equal apparent field of view, a gorgeous 100 degrees. Both fields were very flat and were sharp right to the field stop. Resolution appeared equal, but as time progressed the Moon began to edge into a tree and made this difficult to judge. A very slight yellowish rim around the non-terminator edge of the Moon with the ES 14mm was noted by one of the observers. The Televue 13mm Ethos showed a very pale blue tint to the same edge, and it spilled across the face somewhat this may have been induced by the polarizing filter.

Resolution to the core, very tight stars, good contrast considering the Moonlight. Again, both eyepieces were sharp right to the field stop. No appreciable difference between the eyepieces was noted. Blind results: 4 preferred the ES 14mm, 1 preferred the Televue 13mm Ethos and the rest including myself felt there was no difference.

While observing M13 I nudged the scope a bit to see if I could fit M13 and NGC 6207 in the some FOV and the answer is yes. Now with M13 on one edge and NGC 6207 (a small spiral galaxy) on the other edge of the FOV any everything across the field in focus at 170x, this was not only a beautiful view, but a nice test of the eyepieces. Even on the very edge of FOV the core stars of M13 were still clearly resolvable and the galaxy’s shape and structure were wonderfully evident.

Tack sharp stars with no pin-cushion effect noted in either eyepiece, all of the field stars were perfectly focused right to the edge. Contrast was very good and even across the field. Blind results: 4 preferred the ES 14mm, 1 preferred the Televue 13mm Ethos and the rest including myself could not decide.

The overall impressions of those who looked thru both eyepieces was that they are of the highest quality and well corrected to produce flat even fields, tack sharp focus with no visual evidence of any type of optical aberrations. I am anxious to do some additional testing under better conditions. One thing that was noted by everyone was the eye-relief of the ES 14mm is noticeably longer than that of the Televue 13mm Ethos; this made the ES 14mm a more comfortable eyepiece to use. The ES 14mm is noticeably heavier than the Televue 13mm Ethos, and is only available in 2” format (the Televue 13mm Ethos is both 1.25” and 2”). With all of this being said and when you look at both eyepieces side-by-side and the views they give, the only real conclusion I can draw is that there is no optical / performance difference in these two eyepieces. That leaves price, both eyepieces are not cheap, however the Explore Scientific 14mm 100 degree is introductory priced over $200 dollars less than the regular price of the Televue 13mm 100 degree Ethos. My only question is when will Explore Scientific begin production on additional focal lengths … I could use an 8 or 9mm and a 19 or 20mm for my collection.