The I3 Piece Image Intensifier Eyepiece 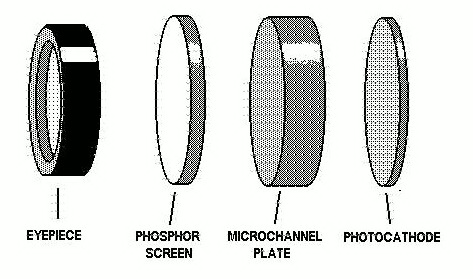 We'd all like to see more with our telescopes - to get a better view of that wisp of nebulosity or that faint galaxy. Taken to its logical conclusion, this is a lust for a larger telescope, commonly known as "aperture fever". But for me, watching owners of really large telescopes going through the exercise of setting up their light buckets is like a cold shower. I don't feel like aggravating my bad back to enjoy the hobby, and there's a lot to be said for measuring setup time in terms of a couple of minutes.

My interest was roused by an ad for the "I3 Piece" image intensifier eyepiece by Collins Electro-Optics. It claims an increase in the light grasp of a telescope by about two magnitudes, or the equivalent of a non-intensified telescope 21/2 times larger. Then there was that positive review of the I3 Piece in the February 1999 Sky & Telescope. I also visited the Collins Electro-Optics web site for more information. The answer to a dilemma appeared to be at hand - more light grasp without more telescope to lug around.

The diagram above shows the main components of the I3 Piece. When light strikes the photocathode, electrons are emitted, which flow into the microchannel plate, are enhanced, then strike the phosphor screen. As you observe with the I3 Piece, you are viewing the image on the phosphor screen. The microchannel plate is what amplifies the light. It is composed of millions of tiny tunnels with specially coated walls. The electrons emitted by the photocathode flow through these tunnels and ricochet off the walls, creating a cascade of additional electrons.

The I3 Piece is used like any other eyepiece. It's threaded for filters and can be used in conjunction with a Barlow lens. When using a Barlow, you'll note a marked darkening of the background, something you're not aware of in a normal eyepiece. There is a special optical eyepiece (made by Tele Vue) that comes with the I3 Piece in either a 15mm or 25mm version, which are interchangeable. The I3 Piece is focused in two ways. First use your telescope's focuser to get star images as small as possible, though they still won't be sharp. Then you focus the I3 eyepiece on the phosphor screen so that star images are pinpoints. This latter focusing is normally done only once, unless other people will need to refocus for their own eyes.

There are a few cautions. It is not intended for viewing bright objects...which don't really need to be intensified, anyway. The moon would damage the electro-optical elements, as would any extended viewing of bright planets. It's also recommended that stars brighter than 2nd magnitude not remain in the field for extended periods. I also discovered that the I3 Piece completely flips the image, making it erect, so regardless of which telescope you're using, you have to re-orient yourself when moving to different objects.

The I3 intensifies whatever you happen to be viewing. That means the background is fairly bright when using it in your backyard, since it's enhancing the skyglow, along with the deep sky objects. The situation is somewhat improved by using a broad band nebula filter with the I3 Piece. Using my 4-inch refractor from the backyard, it increases the ability to see more of the spiral arms in M31. It won't work miracles, though, since sky conditions still play a critical role. On one mediocre night, I was not able to see M110, but a few nights later it stood out fairly well. One of the first things you do notice even in a light polluted sky is that a lot more stars are visible. On M13 from my backyard, the 4-inch normally shows a circular fuzzy patch with some stars just visible at the periphery. With the I3 Piece, M13 was completely resolved right to the core! But looking for fainter objects from a light-polluted backyard is disappointing, since the bright background overpowers anything very faint. You have to remember that this is not a substitute for a nebula filter. However, I didn't purchase the intensifier for use in my backyard.

Here the background becomes somewhat darker, but the scintillation (minute sparkles in the field of view) becomes more obvious. With my 10-inch scope, which has an open truss tube, scattered light proves annoying. I saw flashes of light when using the I3 just from other observers' red lights, even though they weren't aimed in my direction. Also car headlights from a nearby road at the Hebron site (again, not aimed in my direction) would cause a brightening of the field. A closed-tube scope doesn't have this problem.

From the farm in Hebron, the faint, distant open cluster NGC 2158 just at the edge of M35 in Gemini normally appears as a fuzzy patch in my 10-inch. With the I3, it was fully resolved. The Eskimo Nebula in Gemini was very bright, and the central star stood out prominently. M81 and M82 are always easy targets, but they stood out very brightly with the I3. M82 showed very nice detail, and the faint neighboring galaxies popped into view. The "Tank Track" Nebula (NGC 2024) off Zeta Orionis stood out well, but I couldn't detect the nebulosity that harbors the Horsehead. You don't need the I3 for M42, but it did bring out some interesting features of this nebulosity. The Trapezium was remarkably bright, and the E and F components were duck soup. But the real test was yet to come.

While observing with my 10-inch under the dark sky of New Mexico, I compared the I3 with the view through a regular TeleVue Wide Field 19mm eyepiece, which was as close as I could come to the focal length of the 25mm eyepiece of the I3. The green background was the least bright of any of the sites where I had used it to date. Deep sky observers rely on contrast in order to detect faint objects. We often use shorter focal length eyepieces to darken the backgrounds in order to improve contrast. But the I3 shoots itself in the foot by displaying everything against that bright green background, rendering it useless for anything faint.
Stars show up much better and dark lanes are more pronounced in the I3. It really excels at globulars; M13, M22, and Omega Centauri looked magnificent ...peeled right to their cores. But its performance on other types of objects was spotty. Using the I3, I was able to see the central star in the Ring Nebula (M57) for the first time with the 10-inch scope. The Owl Nebula (M97) in Ursa Major was easy in the 19mm eyepiece, but totally invisible in the I3. The Swan/Omega Nebula (M17) was brighter in the I3 but the amount of detail seen was the same in the 19mm. The divisions between the lobes of the Trifid (M20) stood out better in the I3 but finer detail was seen in the regular eyepiece. The Veil Nebula in Cygnus was much easier and more detailed in the regular eyepiece. For nebulas, I would classify the view in the I3 as "crude". You're better off using a narrow band nebula filter.

Centaurus A was brighter in the I3 and the dark lanes showed up better as little fingers into the glow of the galaxy. I tried looking for fainter galaxies with the I3, such as NGC 4631 (9.8 mag.) and NGC 4656 (mag. 10.6). I couldn't locate them at first, but found them easily in the 19mm eyepiece. Popping the I3 back in the focuser, I was able to see them. Forget about using the I3 for faint fuzzies. It doesn't raise the brightness of faint extended objects beyond the level of the green background. If you want to go deep, stick with a regular eyepiece.

One of the unexpected advantages is that its ability to show bright deep sky objects still brighter makes it very useful for public star parties. Visitors often have a hard time seeing objects that experienced observers find easy. They may be bright to us, but the public finds those faint hazy patches to be a letdown. The brighter background also makes it easy to observe with both eyes open, thus reducing eyestrain. And you find yourself concentrating so much on the objects in view that the green-colored background and scintillation of the phosphor screen tends to be ignored after awhile.

But there are some drawbacks. First, you don't have a background of black sky that gives the feeling of "space" to your view. Regardless of how dark the sky may be, the bright green background is always there and it pretty much destroys your night vision for a short time.

When others want to take a look, in addition to adjusting the focuser, they'll usually have to re-focus the eyepiece on the phosphor screen in order to get the sharpest possible view. That's time-consuming because everyone's eyesight is somewhat different. There's also a danger that the eyepiece might be screwed out too far and fall off. (That already happened to me.)

The greatest single drawback is the price - $1995.00. In my book, that's far too expensive for a piece of equipment with such a limited application.

As advertised, the image intensifier increases the apparent light gathering of any telescope. But the increase in light gathering is not uniform. Sure, it does a fine job on bright deep sky objects and especially with stars. But the enhancement isn't sufficient for viewing faint objects and finer details. While I'm disappointed to some extent, it's a technology that I believe has potential. Future versions of this eyepiece will no doubt be improved. It's just that I don't find it that useful yet.

In my earlier review of the Collins I3, I pointed to an inability to show faint objects against the bright green background of the phosphor screen. Further use of this image intensifier on another telescope has resulted in a more favorable opinion, so some additional comments are in order.

After reading my review, Bill Collins suggested that the results would have been better with a closed tube telescope. (My negative comments were based on its use with my 10-inch open-tube Newtonian.) I subsequently acquired a 6-inch TMB apochromatic refractor, with which the I3 gives much better results. The background glow of the screen is less obtrusive, but the big difference is that in a dark sky I can now easily see faint objects with the I3 that are barely detectable in a normal eyepiece. Moreover, details such as the central hubs and structure in the envelopes of galaxies are now more prominent. With the 6-inch APO, the I3 has become my standard eyepiece for hunting down faint fuzzies.

The I3 is so sensitive that it picks up and magnifies any scattered light, brightening the screen background and overwhelming the feeble images of deep sky objects. Our eyes are less sensitive to this extra light that is thrown about. Because a well-constructed APO has good baffling in addition to the closed tube, extraneous light is kept to a minimum. This dims the background glow of the screen and increases contrast with the objects observed. I now heartily endorse the I3...but it depends largely on the telescope with which it's used. Too bad this isn't noted in the advertisements.

The author has been an astronomer for over 40 years and has owned a number of telescopes. Currently he uses his 10" EQ newtonian and a Celestron GP-C102 refractor from his home in the Northern suburbs of Chicago. He describes himself as primarily a visual observer and has logged over 1000 objects. He confesses to having a single bias against low-quality telescopes that beginners often end up buying when entering the hobby.