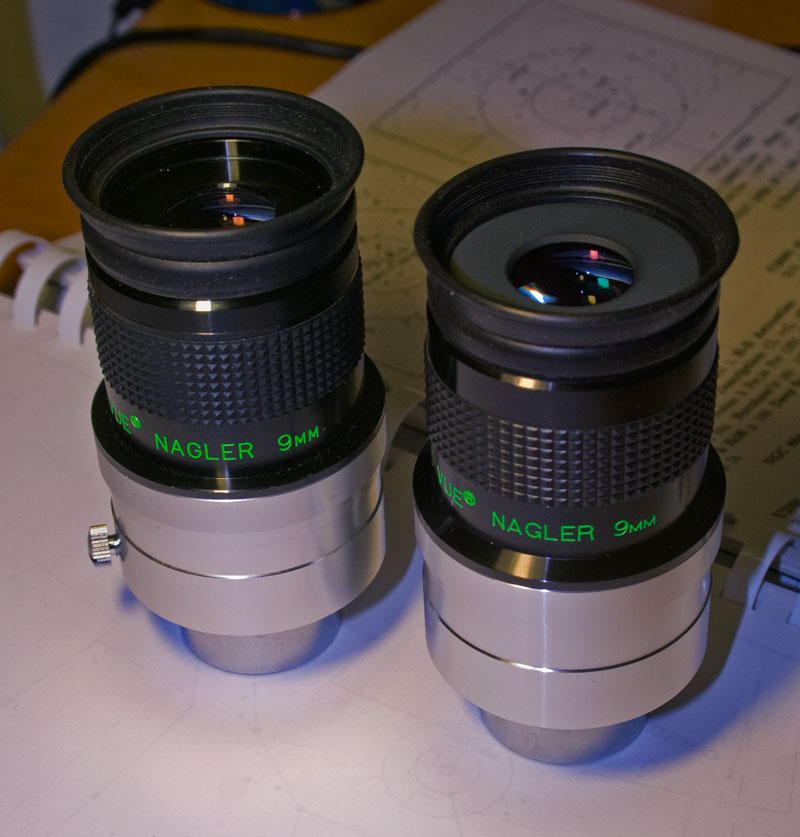 I'm going to tell you a story between the serious and the facetious for the monocular amateur astronomer, that becomes chilling for devotees of binocular astronomy which look for “the perfect couple” for their binoviewer.

Once upon a time an historical object appears in a Charity shop of a Forum. This object was an eyepiece, which we are going to call it "Nagler 9”.

It was sold at a very good price. Many poor little astronomers were attracted to it, but only one was managing to win the ancient eyepiece.

This "one" was a proud astronomer (of which we cannot disclose his name) we will call him "Pilolli" just to maintain anonymity...to be clear! :-)

The thing that makes "Nagler 9" a special eyepiece is his family affiliation: the famous, great "Type 1".
An ancient family of eyepieces that originates in the late 70s and starting from America began to populate. The intent of the founder of this family, Sir Al, is to conquer the World of Focusers as soon as possible, with its innovative project.

Eighty-two degrees of apparent field for each specimen called "Nagler".
And for a good part, he got success: an amateur astronomer had ever had so much breath watching through an handful of glasses: an eyepiece very, very wide.

We can say “ultra wide”.

The "Type 1" was always regarded as the top range of the huge field eyepieces, so impressively huge (for the 80s) thanks to the fact that eyepieces were used to marry and get coupling in Japan where, you know, the quality of life was better.

It came on the beautiful little children, full metal made, and beautifully constructed with the rigor and purity that has always characterized the Japanese air that little small eyepieces breathed from childhood.

But since some year ago, the Japan air has become unbearable for Sir Al, which decided to shift its reproductive colonies of Naglers to a more comfortable country where to live in: the Republic of Taiwan.

The eyepieces began to get satisfied with "bread with water" to breeding themselves.

Without suffering qualitative drops, mothers-eyepiece kept to bring out new subfamilies of Naglers specimens called "Type 2", "3" and "Type 4". Up to the 5 and 6, in the new millennium.
The new strains had characteristics that led innovation.

The DNA of families of eyepieces has adapted, over the years, to the needs of optics. Dad Al was happy as never before.

Today you can count thousands of followers of the Great Field Nagler all around the world, in any focal-lenght family.

And to look inside a Nagler seems a privilege and a pleasure.
But in any focuser that fits one Nagler there is a conviction.

Atavistic belief. Deep and rooted.
The Royal Family is one. And it is the original. The First. The "Type 1".

Painstaking construction and components chosen directly from the depths of the Earth's mantle give top-sharped images for Eternity.
All this things make the First Nagler Dynasty something that can not be replaced for the People of Focusers.

To own a Nagler

So, back to the Charity shop, the human “Pilolli” is one of the privileged fellows that didn't miss one of the top range, The Made in Japan eyepiece.

Another madman who simply called "davidem27" seems to disregard this fortune, especially when "Pilolli" shoves in his face that sample by Sir Al, forged in ancient times.

But “davidem27”. which had all his trust in a glorious “Meade 8.8 UWA” didn't know what would happen shortly thereafter.

In a period of a lunar cycle, it appears in the same Charity shop another "Nagler 9". With the speed of a sleeping Panda of the Sahara Snows, "davidem27" decides to make his own that Nagler 9, displacing forever any doubt on the desire for First Nagler Dynasty.
He finally had at his own eye this noble eyepiece.
Unaware, however, a small hitch.

The hitch was called "Republic of Taiwan".
Is known that the replication of Nagler specimens has always been full of tumultuous events over the years. As with the Evolution of Species for these eyepieces there was a Natural Selection of Life.

And so, over the years and families (the so-called Type), some focal-length has remained and some has been swept away by the new family member.
Put two pieces together, the Pilolli's and davidem27's eyepiece, it shows a chilling evidence. They are different!

The Made in Japan one is made entirely of metal, except the rubbered eyecup.
The Made in Taiwan one has the upper part of the eyepiece made by PVC. 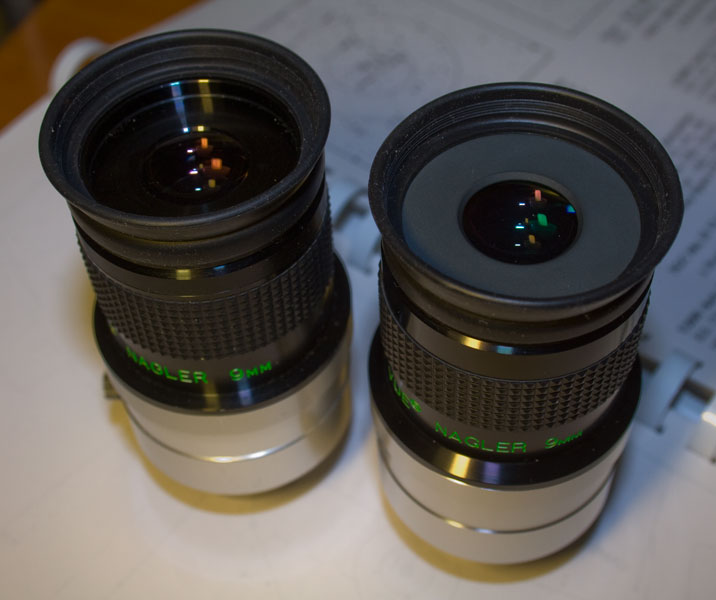 The Made in Japan one has a eye relief innermost, almost uncomfortable and is hard to see the field stop.
The Made in Taiwan one is much comfortable. The eye relief is correct and “longer”: the field is visible in its entirety for the person that observes without glasses. 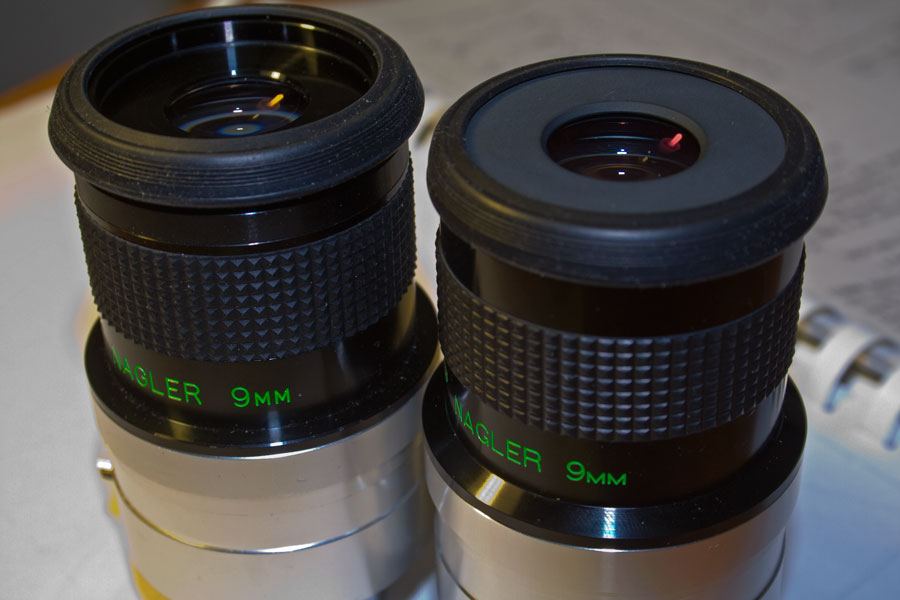 The Made in Japan one has bluish lenses, like those of yore.
The Made in Taiwan one has lenses with coating on greenish, typical of Chinese works. 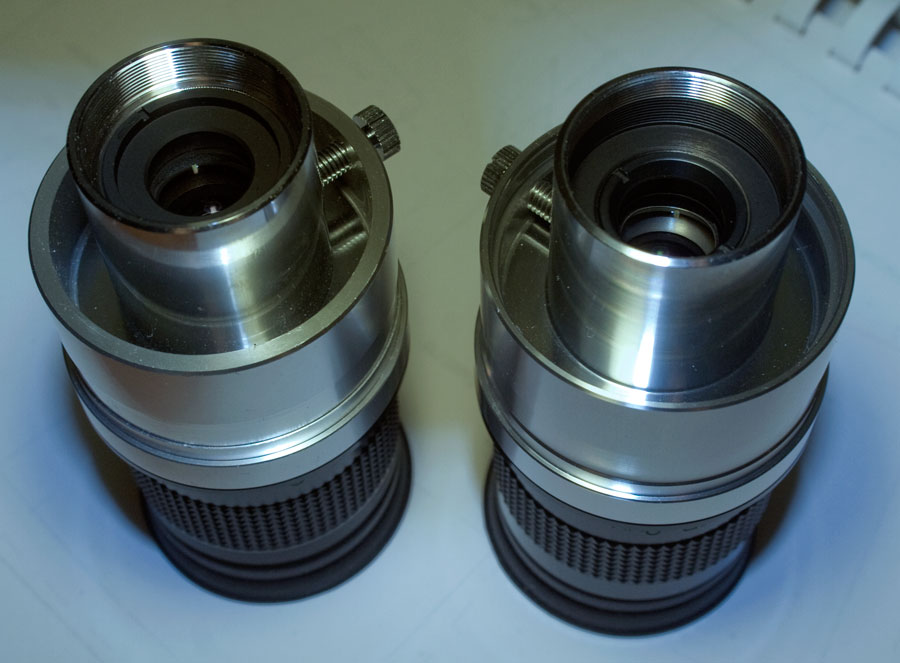 Sir Al keep to say that the process of making eyepieces remains adjacent to the Televue standards.
I believe, however, that each eyepiece has a history to itself, which changes by the kind of telescope to which the eyepiece is put.

Meanwhile, these are the eyewitness testimony

During a 3 hours long observation on various punctiform objects (read open clusters and double stars) and on the Moon, the eyepieces appeared almost identical.

But, lovers of binoviewers, be careful what you are going to buy.

To eyepiece maniacs: Japan is not necessarily better than Taiwan.