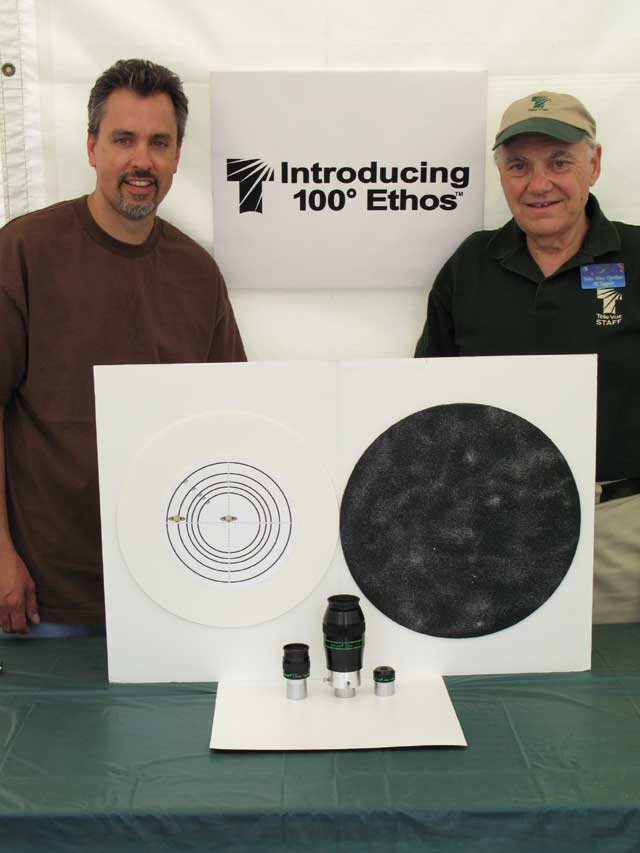 This review focuses less on the technical aspects of the Ethos and more on my personal experiences and opinions of its visual quality in fast Newtonians and refractors. I usually prefer to let the designers comment on the technical features since I’m more of a visual test pilot so to speak. It will be interesting to hear what others have to say but David Nagler has been wonderful at answering some of my technical questions.

When I attended NEAF, I spent some time with Televue talking about this new and innovative eyepiece. I will tell you right off the bat that I’m actually not an ultrawide eyepiece fan, let alone a hyperwide as in the case of the Ethos. I tend to favor eyepieces with apparent fields of view not wider than 70 degrees. It’s not because my eyes cannot see the field-stops in any of these ultrawides, it’s simply because these eyepieces tend to give me the impression of a very “in your face” kind of feel. I like things backed off and framed a bit. With all that said, this does not prevent me from appreciating ultrawide eyepieces at all.

When Tom Trusock stopped by to visit my booth at NEAF, we exchanged thoughts on the newly introduced Ethos. At first, I was a bit bummed that the focal length chosen was so short, just 13mm’s. This is because most of my general observations of deep sky are conducted with a 22mm Panoptic. To me, this focal length is a nice workhorse for my 10” F-5 and 12.5” F-5 Newtonians. Tom on the other hand was very happy with the idea of a 13mm being the choice of focal length. It didn’t really kick in for me until later that I finally gave Tom’s opinion a second thought, as you are about to see.

Just before David and Al were ready to leave NEAF, they stopped by my booth to say goodbye. I told them both how impressed I was with the Ethos and that I’d like some time to test it in the field at RTMC and possibly review it for cloudynights. Since Al knows his Televue plossls are my favorite planetary eyepieces of all time, he offered to bring me an original 13mm plossl to compare it to his 13mm Ethos. This is how confident he was about me comparing the axial contrast of the Ethos and he knows I’m a stickler for this. Keep the term “axial” in mind since we’ve all been so overwhelmed by the fact that this is actually a deep sky eyepiece with an apparent field of view of 100 whopping degrees! 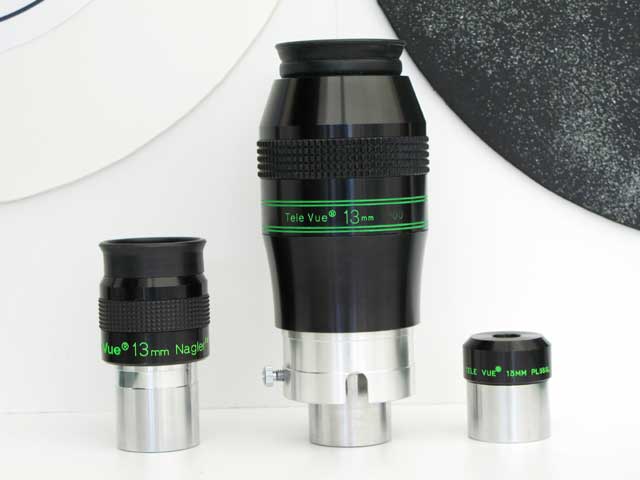 SOME NEW THINGS ABOUT THE ETHOS:

According to Televue, the Ethos utilizes a newer type of glass. Some observers (myself included) have commented about the slightly warm views in Televue’s line in fact it was mentioned by one individual at RTMC. Al turned around and said “I wonder how that all started!” Honestly, I felt like crawling down a hole. I suppose I’m the culprit since I focused on it during the planetary eyepiece review a few years back and talk about it on cloudynights when making comparisons. Never the less, most observers can’t even notice it in the dark and according to Al, the Ethos has a newer glass that is cooler, whiter and more neutral than the rest of the Televue line. This was a plus for me since it’s what I prefer to see during deep sky observations or daytime observations while looking at terrestrial objects.

Another plus is the weight of the Ethos. It’s astonishingly light at just one 1.25 lbs. I was amazed when I lifted it. Televue is not commenting the amount of glass elements in the Ethos yet, but I can only guess that the glass elements are either thin, or there’s probably less elements than we think. I can’t think of any other way it could weigh so little unless it’s the housing, so we’ll just have to wait and see.

WHEN WILL THE ETHOS BECOME AVAILABLE?

I asked this same question to Televue and the response was about four months from the time of this review. At the present time, there are only five prototypes in existence due to slight improvements being made in each one and no price is set yet, so you’ll have to hang in there.

LET’S GET DOWN TO BUSINESS:

For the first hour during my comparison, Televue had a number of refractors on display at RTMC. I chose the TV85 and decided to warm up my eyes using just the 13mm plossl Al brought, along with a 13mm T6 Nagler. I compared the two for about an hour before I even went to the Ethos. I went back and forth, observing some faint features on the Moon and a number of deep sky objects. Seeing was about a 7 during twilight and the Moon was past first quarter but it didn’t matter since all things are relative.

I could tell the 13mm Televue plossl was a bit brighter on the Moon than the 13mm T6 Nagler. The image in the Nagler was also a bit warmer than the plossl (I know Al wants to strangle me). Faint fuzzies looked a bit more pronounced in the plossl, but over all, I still preferred the panoramic views of the Nagler T6 since the axial differences on deep sky were pretty close anyway. On Venus, I could see about 5 to 6% less light scatter in the plossl. Overall, star points in the T6 Nagler looked sharper for most of its apparent field of view, while the plossl is more of an axial planet killer. BTW, the T6 is also a great planetary eyepiece as well and I highly recommend it for fast scopes. There were virtually no internal reflections in it during any of my tests past or present.

Next came the Ethos and the target was M44 in Cancer and it was like a mural of stars. The first thing that really struck me was how amazingly sharp it was across the entire field in comparison to the T6 Nagler and I literally dropped my jaw! In other words, the Ethos had a flatter area for most of its 100 degree apparent field than the Nagler did with its 82 degree apparent field. Don’t you find that a bit ironic? This eyepiece defies logic. I came to realize that 13mm’s is perfect for most refractors. I tried it in the NP127, NP101 and 102 and it’s just the right focal length. Stars look like tiny pinpoints from nearly edge too edge. The Ethos is not only going to sweep up huge star clusters, but you’ll be able to push your magnifications higher on large galaxy fields to increase contrast and still see them all.

I also found the eye relief nice and comfortable for taking in the entire field. It felt somewhere right between the T4 and T6 series. I personally had no problem with my peripheral vision noticing the field-stop but I admit that I felt like I was swimming in the cosmos with this eyepiece. We were able to gobble up huge swaths of the night sky at once. It was actually quite entertaining to say the least.

Next, Al dared me to compare the axial contrast of the reputable plossl to the Ethos on Venus. To my amazement, I could barely tell any difference in light scatter between the two. Al was so confident about this, we even moved Venus off axis and across the entire field of view to check for internal reflections. I couldn’t see a single one and the contrast and edge correction was simply incredible to say the least. The pincushion distortion inherent in just about every eyepiece was also one of the least I’ve ever seen.

Steve Kennedy has a reputation for making the most consistent large aperture mirrors in the industry and I can personally attest to this. I decided to stop by and pay Kennedy a visit since he had just completed his new 32” F-3.6 for display at RTMC. Now this is a really fast scope! I told Kennedy I wanted to bring the Ethos over to check how it would cope with the inherent coma in these really fast Newtonians. John the Televue rep, Al and myself brought the Ethos over and there were about a dozen others. First, we wanted to test the Ethos without the Paracorr just to get an idea of what we were dealing with here. M13 would be the prime target for this test along with a couple of others. Like any eyepiece in a Newt this fast, there was obvious coma around the edge but let’s be realistic. A Paracorr must be married to a scope this fast.

Next, we used the Paracorr. Al has not yet made any final decision on which setting he feels is best for the Paracorr and Ethos combination but we’ll soon see. The Paracorr really helped clean things up and I was really amazed at how the Ethos performed in Kennedy’s Newtonian. In other words, this eyepiece is going to be a killer in fast Newts! So you don’t have to worry. This is one of the issues I was mostly concerned about and the Ethos was fantastic. We also had a go at M57 and a few other targets but the flatness of field was what really impressed, not to mention great contrast to boot. I should also note that 13mm’s is going to be a fantastic for faint galaxies and globular clusters in bigger scopes.

As I stated before, I admit that I’m not an ultrawide freak, let alone a hyperwide freak but the Ethos is just too dang cool to pass up. I’m buying one as soon as they become available. Darren Bly, who is my mentor on deep sky observing visited my booth the next day and told me to put his name on a list for one. I said, not until I get mine first, haha. The 13mm Ethos is a marvel of engineering and a huge break through. I expect the Ethos to be one of the hottest eyepieces this industry has ever seen and it has all the characteristics I look for in a great eyepiece. Let’s just keep our fingers crossed on the price. Mark my word this thing’s a killer!