First impressions of the Celestron CGEM-DX

First impressions of the Celestron CGEM-DX 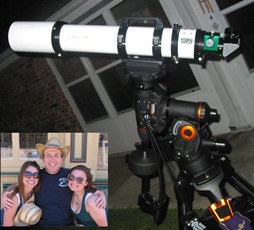 My first Celestron GEM was a C9.25 AS-GT (Advanced Series ¨C GoTo / CG-5) mounting, purchased about 2001. The ad touted the mount as an astrophotographer¡¯s dream, but it proved to be marginal at best as an imaging platform. It was excellent for casual visual use, but did not possess the torque to reliably slew a 25+ lb. imaging configuration. A tandem mounting adaptor overtaxed the mounting badly, resulting in a $125 repair bill from Celestron.

As a result of a job opportunity in January 2010, I was able to purchase a regular CGEM directly from Starizona, and pick it up in person. The DEC gears needed adjustment, and my issue was addressed on the spot. Once that was fixed, it handled my C9.25 SCT and Explore Scientific ED127 OTAs with relative ease. The CGEM did not work well with my Celestron 17 amp portable Power Tank, and was much more reliable after switching to a 92 amp marine deep cycle battery. Like its smaller sibling the AS/GT, it tracked admirably and pointed reliably. My reason for upgrading to the DX was to allow for my next purchase, a 10¡± Newtonian. The mounting arrived right on time in early March of this year. 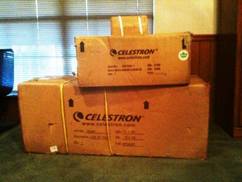 The three boxes arrived as if they were recovered from a shipwreck en-route from China. Oddly enough, the one imprinted with the CGEM-DX moniker was the worst. The contents had some initial condition issues, perhaps resulting from shipping damage. Celestron is currently addressing this issue, so I¡®ll reserve judgment and further commentary for a future update. Call me obsessive if you wish, but I like to smell shrink-wrap when I open my Astronomy gear.

The tripod is a monster. It is substantially more massive than the regular CGEM tripod. Whereas I could fit my CGEM tripod in a canvas bag designed for an ORION refractor, I have no idea how I am going to tote this bad boy around. It¡¯s huge, and may require two people to manipulate.

Once I had everything unpackaged, I proceeded to assemble the tripod in my back yard. Below is a summary of my observations concerning tripod setup and configuration.

Setting up the mount equatorially 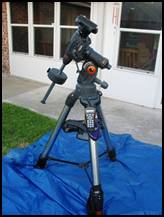 Once I discovered that it is easier to attach the Equatorial Mount with the Accessory Tray loosened, installation was very similar to the CGEM. Again, it is very heavy; don¡¯t attempt to move it very far once the equatorial head and counterweight are attached. The nice longer clutch release handles are a nice change¡­ they were tight and gave a feeling of rigidity. The DEC clutch release handle rotated the DEC axis slightly when fully tightened, but a quick call to Dean at Starizona remediated that issue quickly and effectively.

For whatever reason, Celestron equips their hand controllers with inadequately short coiled cables. The new hand controller holster is bright orange metallic, and fits around the tripod leg using Velcro. After connecting the cable to the connector in the mount head, the HC cord is considerably stretched when the HC is placed into the cradle. I also placed some velvet material between the Velcro/Metal mechanisms to keep it from scratching the tripod leg. An extension cable from ScopeStuff should be procured in advance.

One 27 lb. counterweight is provided with the mounting. The shaft is enormous compared to the CGEM; it¡¯s like comparing a ¡°C¡± to an ¡°AA¡± battery. It locks firmly in place, and I had no issues with it. I understand it has a significant effect on the overall mounting geometry. 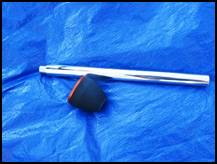 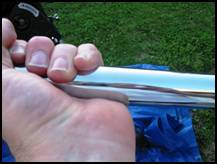 Using my ADM Losmandy to Vixen adaptor, I attached and balanced my Explore Scientific ED127 Refractor tube to the mounting. The counterweight was about an inch away from the top of the counterweight bar locking nut, which means the mount was barely loaded at all. It actually feels pretty good to be way under capacity, for a change! A tip from Dean at Starizona is to make sure your DEC is good and balanced before balancing in RA for optimum performance.

I did a rough polar sight alignment using my iPhone compass and the mounting¡¯s latitude adjustment scale. It¡¯s about as accurate as it was with my original CGEM, which I¡¯ve found to be accurate within two or three degrees. The sun was setting, some stars were visible, and it was finally time to power up. You can imagine my angst as the dreaded ¡°No Response 16¡± error displayed on the HC! Thank goodness it was just a bad HC extension cord, which I promptly replaced. I once again powered the mount, and received the ubiquitous CGEM Ready prompt. I did a Quick Align, went to the HC menu, and enabled the GPS to accommodate my CN16 GPS accessory. The next step was to set the HC to Central Daylight time. Re-starting, the mount wanted me to use Aldeberan as the first alignment star. I fantasized that the star would be magically right in the middle of the finder, but it was off by a country mile. Not even the proper side of Orion! I cycled the power, re-positioned the index marks, and tried again. This time it asked for Caph, the ¡®lowest¡¯ star in Cassiopeia. The slew was closer this time, but not by much. I centered the star in a low power eyepiece, and proceeded. Second alignment star was Rigel, and it looked like it was going to be a long night. It landed somewhere near the belt of Orion, but I continued on, despite the usual air corps of large, thirsty mosquitoes feasting happily on my flesh. After a quick Deep Woods Off application break, I selected Regulus as my first calibration star, and the slew was pretty close. My second calibration star was Capella, and this one was within my eyepiece¡¯s field of view. The next two calibration stars were almost perfectly centered. Breathing a huge sigh of relief, I declared the mounting successfully polar aligned for casual visual observational purposes.

Because it was close, large and easy, I selected M42 as my first target. The mounting slewed effortlessly and confidently to this beautiful object, and nailed it dead center. I let it track for about 90 minutes, and it didn¡¯t budge even slightly. I then slewed to M81, M13, and back to one of my favorite open clusters, M41. All points were flawless, with only an occasional ¡°Wee-you, wee-you¡± slewing noise, which seemed to occur only when slewing past the zenith and across the celestial meridian. Otherwise, the mounting sounds dignified and powerful. Of course, the HC cable tried to disconnect the power cord a few times - Feng shui would be nice, but I¡¯d settle for some better thought out cable connection, placement, and handling. Overall, I¡¯m very pleased with the pointing performance.

The CGEM-DX tracked flawlessly. I began observing at about 8:30 PM CDT, and went to bed about 1:00 AM with no tracking issues whatsoever. I let it track overnight, locked on to M13. When I awoke at 5:00 AM CDT the next morning, I couldn¡¯t see whether M13 was still in the eyepiece due to poor seeing. I did, however, slew to Saturn, and it nailed it like a champ. Bravo, Celestron!

I plan on testing the All-Star Polar Alignment procedure as practiced by legendary astrophotographer Joe Rome. The basic procedure is to do a traditional 2+4 alignment, then slew to a star that is currently near the meridian and also close to the celestial equator. Then you select Align ¡ú Polar Align ¡ú Align Mount from the HC. The scope then re-slews to the star, and you center it in the eyepiece and press Enter. The scope then slews to the position it calculates would be where the star should be if the mount were perfectly polar aligned. You then use the mount¡¯s physical alt-azimuth controls to center the star in the eyepiece, and press Align. There is some debate on what to do after this point, but the consensus is that at the very least, you need to re-do your calibration stars. My Yahoo group buddy Joe Rome has kindly revealed one of his secrets to his outstanding astrophotography artifacts. Once he has performed an All-Star Polar Alignment procedure, he slews his mount back to the Home position, re-cycles the power, and repeats the procedure until the star used for All-Star Polar Alignment is positioned precisely in the middle of the eyepiece during the procedure. I¡¯m anxious to report on how many iterations this will require, and I¡¯m hoping to capture some PhD guiding logs to use to calculate the drive¡¯s periodic error. In this hobby, you are always riding a learning curve.

Overall, I¡¯m extremely pleased with the CGEM-DX. Is it worth $600 more than the regular mounting, especially given the fact that it is less portable? It is to me. Perhaps it¡¯s purely psychological, but I believe that the slews are more deliberate and powerful. I believe that a sturdy mount is a good mount, and I feel as though I have received an exceptional value for my money.

The issue with my clutch handle was minor, and was fixed with a Phillips screwdriver. You remove the screw, rotate the clutch handle, and replace. The more troubling issue was the condition of the boxes and shipping damage. I¡¯ll report on how well Celestron handled this issue on my next installment.

All in all, the awesome tracking and GoTos combined with powerful, authoritative slews made for a fine evening.