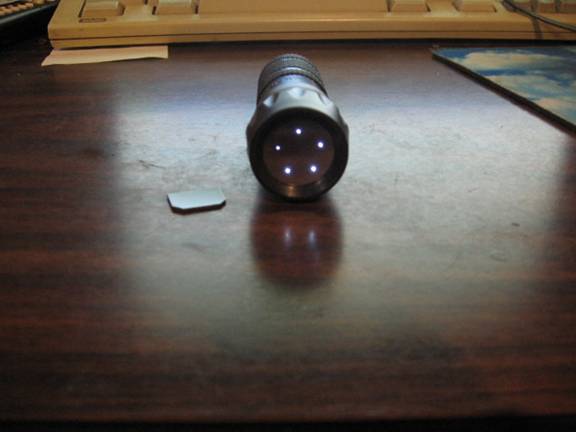 I bought this artificial star during Agena Astro Black Friday sale. I own a Orion Collimating eyepiece and a Hotech cross hair laser collimator. I always wanted an artificial star to double-check my alignment. I own five telescopes and since I became brave enough to pull apart my Astroscan to collimate, I am a little obsessed with perfect collimation (as far as the scope mechanics can allow).

The unit is a small flashlight, powered by three AAA batteries. The flashlight opening is a mirrored finish with five, different diameter access points for the light around the perimeter. A magnet is included to block four of the points so you can use whichever size artificial star is most useful for your scope.

My first attempt to use the artificial star involved my C8. My house is 60 feet wide so I thought I would try it in the house. I set up my scope in the dining room, shot through the kitchen to the family room. Here is my first (I think only con). The artificial star is a ROUND flashlight! Later when I used it outside for my 12XXi, I used some putty on a fencepost to keep it flat and steady. Luckily, I could put the star on the top of the sofa and it did not move. I aligned the finder with the artificial star and peeked through the scope with my 23mm Erfle. Bang! Five Airy disks were in the field of view! I covered the four largest artificial stars and replaced the Erfle with my 14mm. Perfect 3-ring Airy disks showed on both sides of the focus.

Next I took My 130 SLT and did the same test inside. I used the second smallest artificial star for this scope. First thing I found was that my red dot finder was slightly off. Again, the artificial star worked well and I saw I needed to adjust my collimation. Five minutes later, the scope showed near perfect Airy disks.

With my 12XXi, 60 feet was too short to test, so outside I went. Because the view is low when the scope is horizontal, I used some putty to hold the artificial star on a fencepost about 100 ft. away. I did this during the evening when the sun was behind the trees but not dark enough that I would have to fumble if I needed to adjust the scope. I used the smallest artificial star point again.

I found this artificial star easy to use, very compact and versatile. The only con is the round body, which can roll and since it is a flashlight body, it does not sit horizontal. Easily solved by using some putty or wedged in a tree fork.

I am not associated with Agena Astro except as a customer neither do I work or know anything about Hubble Optics.