My name is Paul Crate and I live in Central Florida. I have owned all types of scopes, reflectors, SCTs and Refractors. I have been observing of and on for 30 years. I am partial to small high quality refractors and Alt/Az mounts.

While I own a Celestron/Vixen Polaris GEM with an R.A drive motor that I bought 20 plus years ago I have become most fond of Alt/AZ mounts over the years and mostly use the GEM at public star parties where a driven mount is almost a necessity 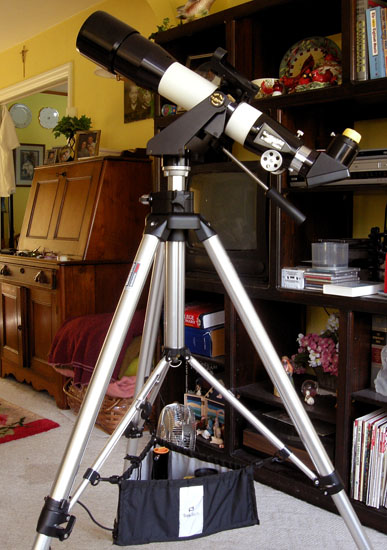 My telescope for the last several years is a TeleVue 85mm refractor and the mount I use most of the time is my TeleVue Alt/AZ mount. I can't really call it a Telepod, although essentially that is what it is, because it began as something TeleVue offered called an "Up-Swing."

The "Up-Swing" was designed to use a sturdy photo tripod head for azimuth movement and provide smooth altitude motion from TeleVue's familiar twin fork design. I bought it for the first TV refractor I owned, a Ranger, and it worked quite well provided the photo head it was attached to was sturdy and smooth.

Later I traded the Ranger in on a clean used Pronto and at about that same time TeleVue offered an upgrade for the "Up- Swing" that turned the mount into a Telepod which I purchased.

Eventually I sold the Pronto and bought a TV 85 and mounted the upgraded "Up-Swing" to a Bogen/Manfrotto 3036 tripod, now known as the Manfrotto 475.

This combination has proved to be the most enjoyable mount I have ever owned but as most of you will agree, it is hard to resist new stuff so when I read a very positive review in Sky and Telescope for the Astro-Tech Voyager mount I thought wow, It would be like my TeleVue mount with slow motion controls. So I went ahead and bought one. 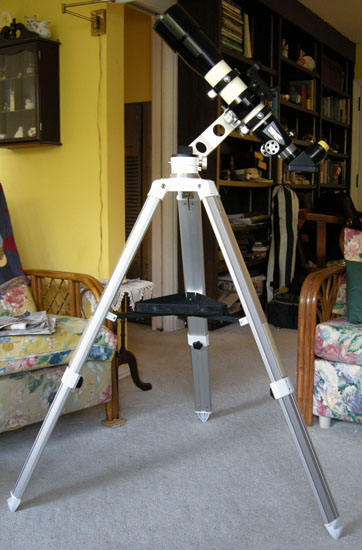 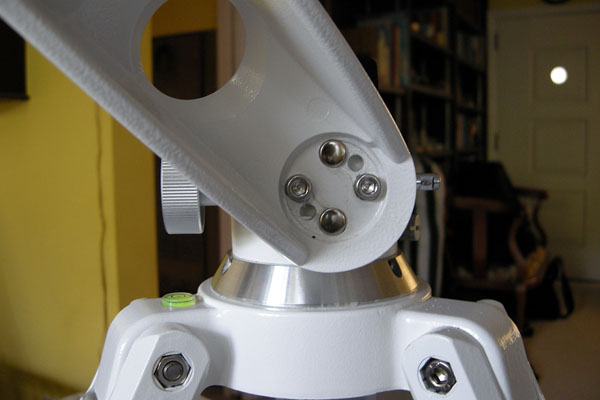 Except for having to loosen the altitude slow motion shaft collar a bit the Astro-Tech worked as advertised it slews okay manually and the slow motions, once the one collar was loosened, are very smooth. The tripod, while a little bit short, is sturdy. The mount is quite well made and is nicely finished.

The mount as the Sky and Telescope reviewer put it is a handsome piece of equipment and I have tried to bond with the Astro-Tech mount over the 8 or so months that I have owned it but I keep going back to the TeleVue mount. 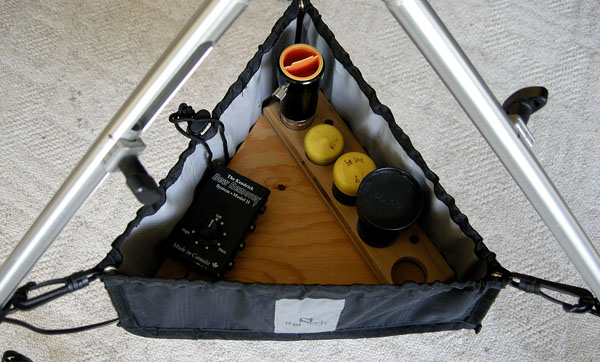 Here are some of the things that I have found to be great characteristics of the TeleVue mount and the Bogen Manfrotto 3036 tripod combination.

1) TeleVue's current mounts, the Telepod mount, the Telepod head only and the Panoramic mount come standard with the mount handle and the Gibralter mount is drilled to accept the handle as an accessory. I bought the handle assembly and drilled the holes needed in my old mount to install it. Having the handle is great for moving the scope from target to target and following planets at high power without having to grab the scopes diagonal which can cause focus shifts.

2) The TeleVue mount on the Manfrotto 3036 is very compact for travel but very steady. I can focus at magnifications of 200 times very easily and it damps out in about a second. The Astro-Tech damps out in about the same amount of time but shakes much more during focusing.

3) I have found that with a little practice I can track planets with the TeleVue at 200 x quite easily. The mount is smooth but does require developing a feel for it and I actually find just nudging the single handle easier then feeling around for the two slow motion knobs on the Astro-Tech.

4) While the manual movements of the Astro-Tech are pretty good there is a bit of initial resistance that causes the mount to be a little jerky for fine final movements to get on target. I think this trait is part of the automatic clutches that engage the slow motions. The TeleVue by comparison is much smoother to move manually

5) The Manfrotto 3036 has a geared center column that can be raised to make it easier to view objects high in the sky. I have found that I can raise it as much as 6 inches with little loss in stability and the tripod leg angle is easily changed to make it easier to carry in and out with the scope mounted and ready to go.

Not all the pluses go to the TeleVue. Here are some of the areas that the Astro-Tech shines

1) The Astro-Tech mount is more forgiving about scope balance then the TeleVue. My workhorse eyepieces consists of TeleVue Plossls from 32mm to 7.4 mm plus a 2.5 Powermate. These work fine with the TeleVue mount balanced for the middle weight eyepiece, which is a 19mm Wide Field, but if I want to use a 2" Nagler or other heavy eyepiece I do have to re- balance. This just is not really necessary with the Astro-Tech, you just have to tighten the clutches on each axis a bit. this will make the mount a little stiffer to move manually but the slow motions will have the same feel.

2) The Astro-Tech mount with its Vixen style mounting system is compatible with a larger number of scopes and it can handle much larger diameter scopes as well. The TeleVue cradle is about 5 and a quarter inches wide and limits it to scopes around 4 inches aperture The stated payload of the Astro-Tech Voyager is 20 pounds and I have no doubt that it can handle that. The mount is well built and well finished.

3) The Astro-Tech Voyager with the arm mounted at 45 degrees allows the scope to point straight up and even a bit beyond while the TeleVue stops at about 85 degrees.

Both mounts are well made, well finished and are good performers. It really boils down to personal preference. I prefer the TeleVue because to me it just does its job smoothly and tends to disappear. I also find the TeleVue mount to be more travel friendly.