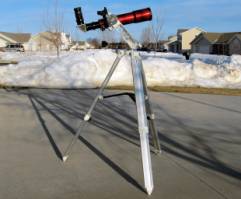 What is an alt/az (altitude/azimuth) mount? An alt/az mount is one that quite simply moves the telescope up and down (altitude) and left and right (azimuth). These types of mounts are generally the simplest to use, lighter in weight and the preferred mount for the grab & go crowd. In other words, one grabs the mount with the scope already attached and carries it outside for quick looks. A camera tripod is the simplest form of an alt/az mount. Other examples of alt/az mounts are a DOB (Dobsonian), a fork mounted SCT (Schmidt Cassegrain) like the Celestron CPC and Meade LX series of scopes as well as the three mounts that will be mentioned here.

The other type of main mount used by the amateur astronomer is the GEM or German Equatorial Mount. This type of mount has the main structure in a T-shape, where the lower bar is the REC (right ascension axis), the REC has to be polar aligned, which in the Northern Hemisphere is about 1° from Polaris, the North star. The upper bar is the DEC (declination axis). The REC has bearings below the T-joint, that is, it is not supported above the DEC. The telescope is placed on one end of the declination axis, and a counterweight on other end of it so as to balance the scope. These types of mounts are heavier and a little more complicated to use, especially by a beginner and take longer to set-up. The advantage of a GEM over the alt/az, is its ability to track objects in the sky for imaging, so it's the preferred mount for those who like to do Astrophotography. 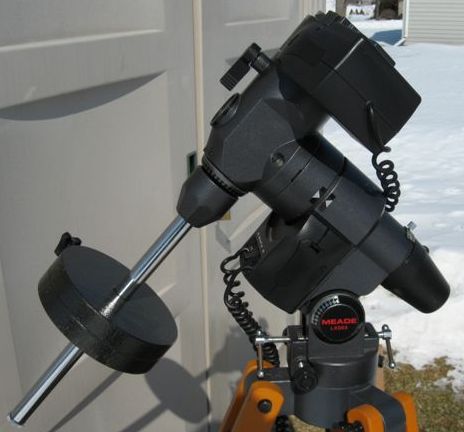 Meade LXD55 GEM I am one of many people who help moderate for the Cloudy Nights web forum. I have co-written a couple of reviews of observatories that appeared in Cloudy Nights. That being said, I am in no way financially connected to Astronomy Technologies (Astro-Tech) or Astronomics, the retailer for the Voyager.

The two scopes I used on the Voyager during this review are the William Optics Megrez 102ED (bottom photo) and ZenithStar 80FD (top photo), both with 2” diagonals and zoom eye pieces with an ‘as tested’ weight of 13.2lbs (6kg) and 8.8lbs (4kg) respectively. The Voyager was also compared to both my Universal Astronomics MicroStar head on a Davis & Sanford compact tripod and my WO Easy Touch (silver) head on a Bogen 475 tripod. 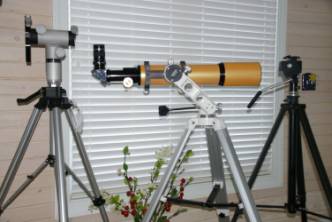 From Left to right, Easy Touch, Voyager and MicroStar

My first impression of the Voyager, upon opening the double boxed shipping carton, was the size of the head compared to my other alt/az mounts. With the long side arm with altitude adjustment on one end and attached to the azimuth adjustment on top of the tripod. 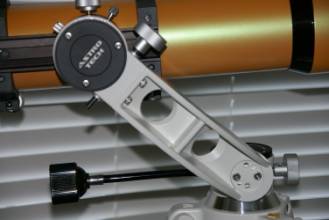 The tripod legs while being aluminum has a larger cross section, 2.75”, and seemed more substantial the usual aluminum legs that come with like sized mounts, like my Meade LXD55 GEM. The next thing that I noticed is that the arm can be attached at a 45° angle at either fore or aft, or straight up. Straight up will give you a little more height over the 49” with arm at 45°, but limits how high the scope can point up depend on the scopes over length. With the arm at one of the 45° angles, the scope can point to zenith. Both alt/az motions use a friction clutch system that allows a full 360° movement just by pushing the scope in the desired direction, the neat part is the slow motion controls that allow you to move the scope view to follow the object while you’re viewing. Both movements can be adjusted with a tension locking screw. The scope attaches to the top of the arm with the usual assorted dovetail bars or to the shoe of scopes that have them. Included with the mount is a 8” flexible shaft with know which can be attached to either the altitude or azimuth control shafts, which already have an aluminum knob on one end. Either of which can be moved to the other side of the shaft. All adjustment and assembly tools that are needed are also included. Total assemble time was on the order of 10 minutes including the unpacking of the mount.

The first time I used the mount was aboard the Caribbean Princess during the Lunar Eclipse of February 2008. The Voyager came the day before I left for the cruise so I brought it along instead of my MicroStar, my usual air travel mount. The scope I brought along was the 80FD because of its airline carry-on sized case with all included accessories inside. This turned into a public outreach program aboard the ship with me as guide. I would get the scope adjusted so people could view the moon, while I spoke to the crowd around me about the moon. With an occasional moment to readjust the scope, which thanks to the slow motion controls made it easy, as the moon slowly moved around in the EP due to the ship’s movement. I did find that the scope needs to be pretty well balanced on the alt arm for the slow motion control to work well. 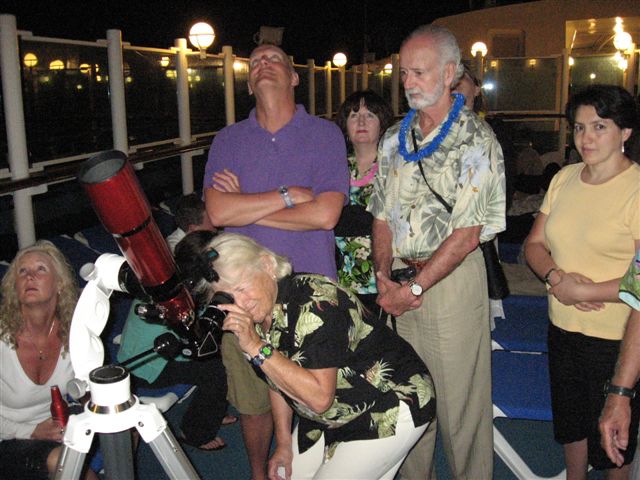 Back at home with lots of snow on the ground slowly melting, and turning my yard into a quagmire, the only place I could use the mount was on the driveway. So that is where I did my night time testing and comparing. With the 80FD on the mount, a rap on the OTA with my hand, had a settle time of 3 seconds and 4-5 seconds with the 102ED mounted. That 5 second rap test was nearly the same with the 80FD on the MicroStar and both scopes mounted at the same time on the EZ-touch. All mounts were smooth in motion, with EZ-touch being the smoothest but, required the most attention to balance. With the MicroStar next and the Voyager last with the least amount of balance needed, except for use of the slow motion control for altitude. My targets used were, Saturn, the Orion Nebula, and the moon.

All were easy to use in low to mid power for viewing, simply push the back of the scope to where you want to point it and view. But where the Voyager really excelled at, was at high power viewing. With either scope, the slow motion controls made viewing at high power very nice, instead of the usual, nudge a little, view, nudge some more, oops, a bit too much, and so on. With the 102ED mounted on the Voyager and a Burgess/TMP 3.5mm Planetary EP in the diagonal, giving me 222X, viewing and tracking Saturn, or running up and down the moon’s terminator was easy. Focusing the 102ED took a couple of seconds to settle down, by using the smoothly turning slow-motion controls, the view was almost motionless as I would turn one then the other, to follow Saturn on its high speed motion across the field of view.

Criticisms of the Voyager are one, while the aluminum legs are stout, they weigh less then the head even without a scope attached, the mount seems top heavy. The second criticism is the height, while the maximum height is fine for viewing while seated, for casual viewing, I prefer to stand, and unless I’m viewing lower objects, one has to either really stoop low or be seated to view through the EP. I’ve read where some have used the Orion SkyView Pro Mount Extension for added height, and others have used the 2” steel legged tripod from a Celestron CG-5 mount to correct these short comings. From what I understand, Astro-Tech has addressed both of these criticisms and has an extension and a full blown wooden tripod in the pipeline to remedy these.

Overall, the fit and finish are very good with a power coated finish on the painted parts. Almost everything is metal with exception of the knobs for the leg extension adjustment screw, the knob to the slow motion control on the flexible shaft, the cover plates to the friction clutch systems and the spreader for the tripod legs. At the current price of $299.00, it competes well with other mounts in its price class and has a higher rated weight load. With the slow motion controls, viewing at high power is almost as easy as a GEM with similar controls, plus the quick and easy use of an alt/az mount.