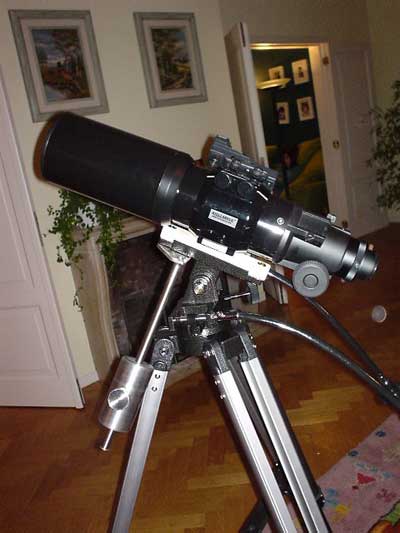 In the first place let me introduce myself. My name is Slawomir Jan Bucki. I am originally from Poland but currently live in Belgium.

I retook interest in amateur astronomy three years ago to introduce my children to the wonders of the evening sky. I did some star gazing during my teenage years with a 60mm Tasco refractor, but that abandoned the hobby for nearly 15 years.

During the last three years I have owner and used the following telescopes:

Recently I bought a Stellarvue 80mm Nighthawk as higher quality travel scope to replace the ST80. I still intend to keep the ST80 and give it to my 9 years old son.

I was looking for a stable but lightweight mount for the Nighthawk. At home I can use it on the Vixen GP, but I wanted something suitable for traveling that does not require a solid table to put it on but can be set up directly on the ground. After several visits to different astronomy shops, extensive research on the Internet and a close look at the available options I decided to go for the AZ3. The other options I looked at are the EQ2, the TeleVue Gibraltar, the UniStar, the Borg, and the EQ3. The AZ3 is much more stable than the EQ2, much lighter than the EQ3, and has the advantage of slow motion controls over the Gibraltar and the UniStar. It also costs a fraction of any of these mounts (with exception of the EQ2).

The Chinese AZ3 mount is a clone of the Vixen Custom alt-az mount. However, unlike the Vixen mount it lacks two features: a dove-plate head and a counterweight. The dove plate is convenient detail, but not essential for performance. With a piece of hard wood I made my own simple adapter plate to mount the Nighthawk on the AZ3. But the lack of counterweight is an important issue.

The AZ3 is very solidly built and quite stable. Its biggest advantage over other popular alt-az mounts (eg. Gibraltar, UniStar) is that it incorporates slow motion controls. It can carry much bigger load than Borg alt-az mount. Basically, everything good said about the Vixen Custom mount in other reviews on this site applies equally to the AZ3. And it is cheap. 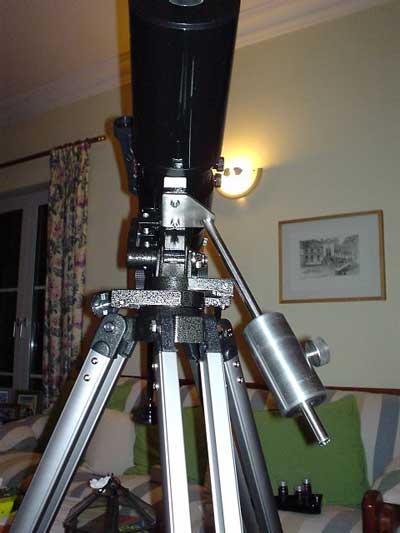 So what's the catch? The only real big problem of the AZ3 is balancing. Something that the Vixen guys realized and properly addressed via the counterweight in the original Vixen Custom D mount - but the manufacturers of the AZ3 omitted. The AZ3 relies on friction to keep the scope positioned at the correct altitude angle. It works fine when the altitude angle is small - depending on the scope's weight. At higher angles (above 30-45 degrees) and with heavy OTAs the scope inevitably "slides" into vertical position. The problem can be partially mitigated by re-positioning the scope forward, but it only works with long OTAs and up to certain elevation angle - above 70 deg it does not work anymore. Adjusting the tension screw on the altitude axis will "fix" the scope at the desired angle - but then repositioning and adjusting the altitude requires excessive force and precise positioning of the telescope is difficult.

The only definitive solution to the problem is to add a counterweight just as in the original Vixen Custom D mount. Eventually, I designed one based on the pictures I have seen of the Vixen mount and had it manufactured at a friendly mechanical shop in Turkey during one of my business trips. For $15 they fabricated for me a counterweight system which can be easily fixed to the bottom of the mounting plate with a pair of screws. The counterweight is only 1kg, adding little to the overall weight of the mount / tripod combination, but the shaft is long so it can be used with scopes up to 4-5kg and still keep the system in perfect balance. The altitude adjustment screw is now tightened only enough to allow easy repositioning of the scope with little effort - the mount is very smooth. It is not pretty, but it works like a charm.

There is another small problem with the AZ3 that can be fixed very easily. It comes lubricated with the typical glue-grease. The friction surfaces, especially the ones involved in azimuth adjustment, are big. In cold weather the mount gets stuck and is almost impossible to move. The easy fix is to clean the whole mechanical assembly thoroughly with gasoline or WD-40 and re-lubricate with good quality light grease.

Overall, I find the AZ3 excellent value for money. Unmodified it is an excellent option for terrestrial observing and lightweight OTAs (like the ST80 and Synta-made long tube refractors up to 80mm aperture). However, for trouble-free use with heavier OTAs it has to be modified by adding the counterweight.

I hope other prospective buyers of the AZ3 mount will find this review usefull.