HOME BUILT ALT-AZ MOUNT FOR AP AND OTHER REFRACTORS 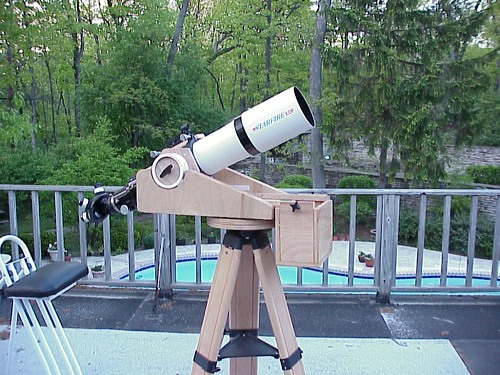 I am a bug on simple, easy-to-set-up mounts for visual work with refractors. I consider EQ mounts as necessary evils for visual work. I had bought a Takahashi Teegul but found it not suitable for high power use with my FS 102 and marginal with my FCT 76. The Vixen Custom D Alt-Az was better. I assumed that the limit for any such mount would be a 4". I was wrong.

I purchased an Astro-Physics 130mm f/6 refractor this weekend. I was searching for a high-end refractor with the maximum aperture combined with minimum size for ease of use. The gentleman I purchased it from (Rob Moore) had seen Rob Hunt's wooden Alt-Az mount for a 155 f/7AP depicted on Rob's site. Moore then built a scaled down version for his smaller, shorter, and lighter 130 f/6. I was (frankly) not that thrilled by the concept when he mentioned it to me, but since he wanted to sell it as a package, it was the classic Hobson's choice - no mount, no scope.

I tried it out last night, and my hat is off to Rob Moore. It may look strange (see the picture) but it works great for quick, fast set up visual work. The stock AP tube rings are cradled in the teflon sidemounts, and open to let you put the OTA into it when still inside. The standard AP wood tripod is used, with a circular wood platform that detaches and goes on the top. The large base is held on with a long bolt through the center, using a teflon washer for smooth rotation. The compartment in the front is for a battery for a dew heater or, for balance last night, I simply used a counterweight.

It takes just a second to set up the tripod, and another minute to put the mount on top. I went in and put the OTA into the holder (note the QuikPoint mounted on the left side) and walked out to drop it in. 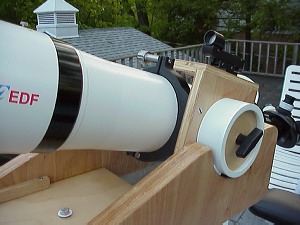 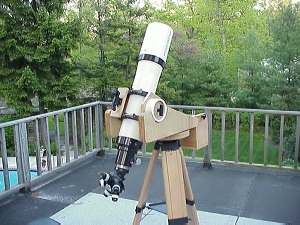 The only tricky part is getting the scope far enough back to balance, but that is a ten second deal accomplished by just sliding it back to the balance point. Once it is balanced, it will move up and down all the way up to the zenith (see photo) with ease and stays put once you are there. It is steady as can be.

How steady is the mount? Unlike my much-disliked Teegul, I was able to use the 2.8 Takahashi Hi-Ortho last night in the Takahashi Quintuplet Turret (see the companion review at this sight.) The mount for this 5" allowed me to get a good steady view of Plato and Tycho with no shake or shimmy at all, except a quick shake that dampened at once after I refocused. The whole mount, with the weight of the 5", the turret, and five orthoscopic eps was nice and steady and a pleasure to use.

Again, my compliments to Rob Moore. This type of a mount should be great for virtually any refractor and, if you have the carpentry skills or know a good carpenter, not much of an expense to build. Astonishing utility and usefulness. Never judge a book by its cover indeed!