First light for the Mini Towers!

I recently had the chance to be with a few friends who have been having a blast with the new Mini Towers from iOptron. When my friend first saw one at NEAF he was very impressed. However, the proof of the pudding is in the eating, so, we waited until he had the actual production units in his hands before we passed judgment. We are all proud to announce that our expectations have been exceeded by a very large margin! 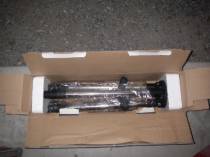 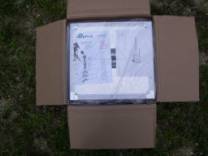 Here is a picture of the tripod in its box and the Mini Tower case in its shipping box. Personally, I would like to see more padding around the Mini Tower, perhaps a box within a box and some foam would better protect it. I had no issues with mine since it arrived in perfect condition. However, I do see the potential for some of these to be damaged in transit.

The mount itself comes very well protected within its own locking case. Included are just about anything and everything that one needs to be up and running, with the exception of an OTA. 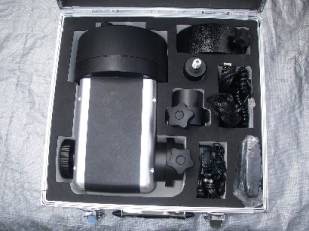 I watched as the mount was lifted easily from its compartment, as did all of the accessories. The items included are the mount, GOTONOVA hand controller, flex cable for the controller, a 20' DC power cord for use with an automotive style 12VDC plug, an AC adapter for use with house current (110-120VAC) and even a USB cable for updating the GOTONOVA controller. Also included are a counterweight shaft, an 8 pound counterweight with locking knob, a SECOND Vixen style dovetail, a mini CD with the manual AND USB drivers and even a set of keys to lock the case!!

The tripod was shipped separately and arrived in perfect condition. The legs are 1.5" OD at the top and 1.25" OD at the bottom. The legs extend quickly and easily. The clamping knobs grip very well with little pressure required. The tripod has a special head which includes three leveling screw assemblies. The Mini Tower rests upon these screws and allows the user to fine tune the mount instead of needing to play with the legs to get things "just right". This is a very smart and well thought out feature. (Obviously, someone had become personally frustrated or lost control of another mount while trying to adjust it to a level position.) The center bolt and tripod spreader are already installed, too! 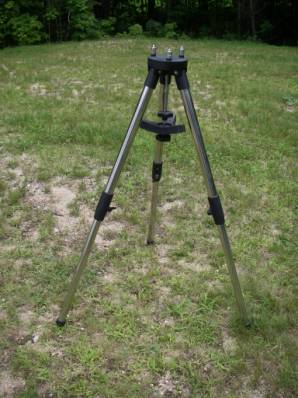 I was impressed by how easily the setup procedure was. It was just too simple. We took the tripod out, opened the legs, set the spreader and made the tripod close to level. We removed the Mini Tower from the case, placed it onto the leveling screws (There are three hard rubber sockets into which these fit on the bottom of the Mini Tower.) screwed in the center bolt until it was home and then started hooking things up. We quickly discovered that the center bolt should NOT be tightened immediately. If you wish to adjust any of the leveling screws it is necessary to leave it a bit loose until the Mini is leveled. Once that is done THEN tighten the center bolt and follow by tightening the support knob.

The next step was to plug in the cable to the GOTONOVA controller which in turn plugs into one of the two "HBX" ports. It does not matter which one. Then the power supply was attached and the switch was thrown. The GOTONOVA immediately came to life with a confident single "BEEP" to confirm that it was working. The controller first shows the GOTONOVA logo, then the firmware version number (European dated) and then the main screen. This screen displays more information than any other system out there.

The GOTONOVA has 8 basic lines of coordinates as well as the date and time. It also shows the correction speed, tracking rate and that the GPS is communicating with the controller. In the top right of the screen it shows "GPS ON" when looking for the satellites. Once it has locked on the date, time and location are updated and the display changes to "GPS OK". It is necessary to go into the "Set Up Controller" section and make certain that you have the correct time zone, daylight savings and offset from UT settings correct. If not, it will think that you are somewhere else. Also, make certain that the "Mount Type" is set for Alt/Az instead of Equatorial. 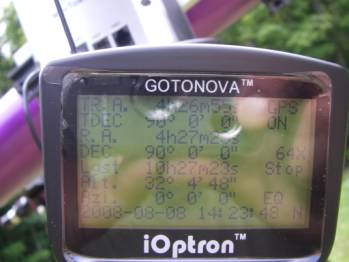 The mount offered its first star selection and we pressed the ENTER key to confirm the choice. The Mini Tower placed the OTA very close to the first alignment star. A little bit of correction and the star was within the FOV. We centered the star in the EP, hit ENTER and it gave us the next choice. The next star WAS within the FOV. We centered it and again pressed ENTER. That's it! We're done! Total time from opening the case to the beginning of our viewing test was 10 minutes, MAX! 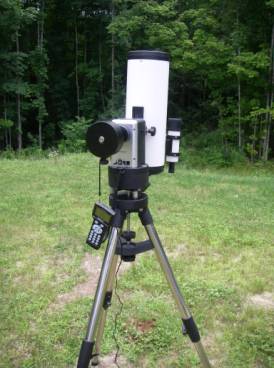 The real proof was now to come. We pressed the MENU key. The choice of SELECT & SLEW was made and the ENTER key was pressed. The next choice was Planets and Solar System Objects. Again, the ENTER key was pressed. We toggled down to Jupiter and pressed the ENTER key once more. The Mini Tower took off and started heading for Jupiter. In moments the planet was right smack dab in the FOV. It was a bit off center, but, with the limited FOV that this MAK has it was very well placed. We pressed the MENU key and toggled to the "SYNC TO OBJECT" selection and pressed the ENTER key once. It told us to center the object and press ENTER, which we did. It returned to the next level up and we selected the SELECT & SLEW section, then DEEP SKY and the MESSIER OBJECTS. We chose M-13 because it was nearly overhead and is always a favorite. The Mini again took off and when we looked through the EP the big bright globular was dead center!! We kept this up with more and more objects, such as M-15, M-31, M33, M-17, M-57, M-20, M-81/82, the Double Cluster and on and on. Most all were very well within the FOV and the few that weren't were brought to center with little effort and the SYNC function was again used to help update the controller. Eventually, Mr. Moon decided to wipe out any further deep sky seeing. Yes, the Mini went straight to the Moon and it was placed dead center in the FOV.

The first observing run was an unqualified success! The people that were present took notice that the mount was very quiet. That should be something that people in close neighborhoods will appreciate. The fact that it can be set up with two different instruments at once will make it a hit at star parties and educational functions. The simplicity of setting up and tearing down makes the Mini Tower an absolute dream. It is very portable since the tripod only weighs about 11 pounds and the mount in the case is about 28 pounds.

It is a rare item that gets this writer excited. I've only recently become involved with GOTO mounts. The few that I have tried have not been nearly this much fun or as easy to use as the Mini Tower. With the years passing more quickly as well as lots of mileage, I need to consider the fact that my 12-1/2â€ f/4.9 reflector along with its mount, weights, etc. are no longer a portable item! The Mini Tower is a perfect set up to help me remain a mobile astronomer. (I live in the center of Manchester, NH and the light pollution here is horrible, to say the least!) If there is a better and more capable mount, with the same features for the same small cost, I am not aware of its existence! IOptron has hit the ball out of the park with the Mini Tower.

PS According to a few friends this mount works well with the planetarium programs Cartes du Ciel and HNSky. Iâ€™ve not yet tried them, but I will at some time in the future.