SHOWDOWN: The iOptron CUBE PRO vs. The Nexstar GT Mount

As promised in my April review of the iOptron MiniTower, I purchased and have spent many hours testing the iOptron Cube Pro. I did so initially in “show down” fashion, comparing the instrument to an older Celestron Nexstar GT mount that I own, from which the 80 mm refractor was removed and onto which a Baader bracket was installed. The comparison testing was done on a beautifully clear Spring night in Michigan. Both mounts, which are available from leading suppliers across the country, were tested using the same 90mm refractor and the same eyepieces on the same (admittedly somewhat wobbly) upper floor wooden deck1 at our cottage. Here are the competitors in place:2 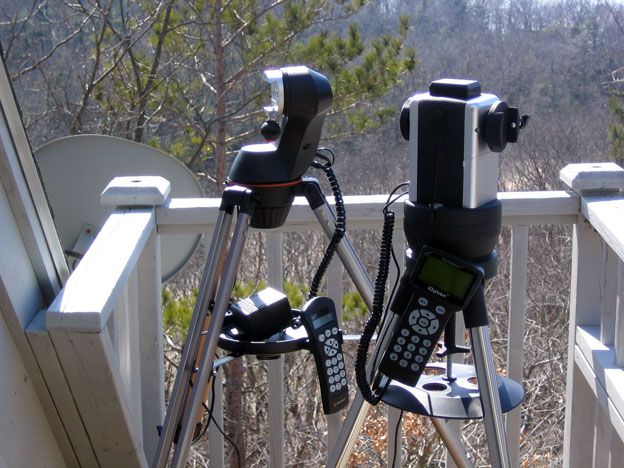 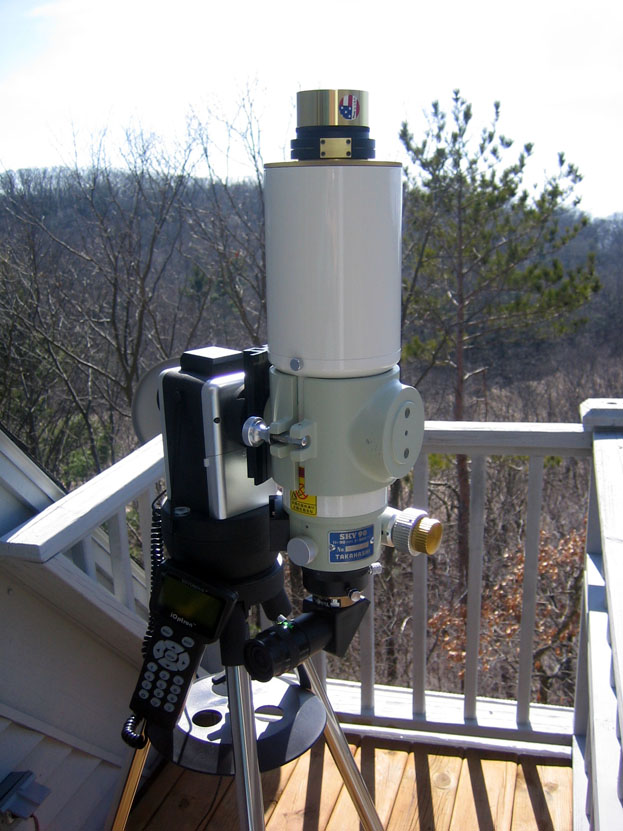 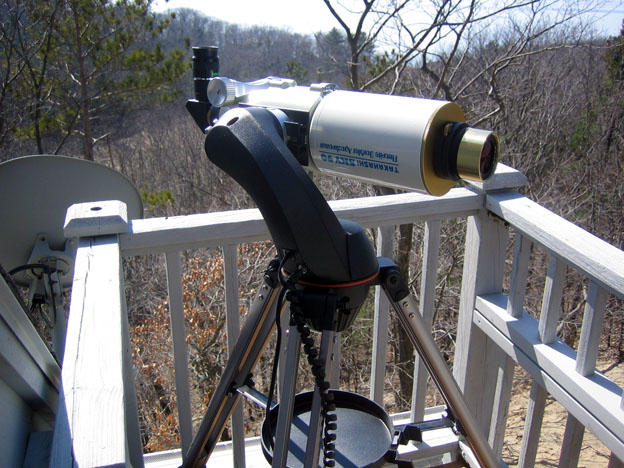 The Cube pro is less wieldy and simpler to connect to the tripod. With the scope carefully balanced, the Cube Pro was easier and more reliable to manipulate (balancing the scope on the Nexstar requires guess work, whereas the altitude axis on the Cube Pro can be released for precision balancing). Both mounts tracked reasonably well, although the Nexstar held the image longer and closer to the center of the ocular. The key pad on the Nexstar was easier to read and more likely to respond when triggered. Battery installation seemed easier on the Cube Pro, which does not require a separate "battery pack." And the AC connector stays in place much more reliably on the Cube Pro than on the Nexstar. The connection on the latter mount has an annoying tendency to separate, losing alignment, and causing bad words to be mouthed. Both mounts showed a problem with cord wrap. The Cube Pro clearly outperformed the Nexstar in the accuracy of the “go to” function, consistently hitting the target using a 13 mm eyepiece, whereas the Nexstar required a 25 mm eyepiece. However, and this was a big problem, the Cube Pro was so unstable that it was nearly impossible to focus the scope, much less observe anything. The Nexstar, on the other hand, was very stable. I placed both mounts on Rigel. Rigel’s Companion was easily visible using the Nexstar mount, whereas it was difficult to observe Rigel itself using the Cube Pro. Why? Read on; this is not the end of the story.

I am not sure, but I believe most of the problem lies in the Cube Pro's supplied tripod, which just does not seem up to the job, at least with a 90 mm refractor mounted on the unit. So I decided to see if I could jury-rig the unit onto a different tripod. When I travel with my 90mm refractor, I take along a Gitzo carbon fiber tripod that is both remarkably light and remarkably stable. Could I affix the Cube Pro to that tripod? Yes! And it turned out to be surprisingly easy. I removed the center bolt with which the mount I ordinarily use attaches (a standard camera-thread bolt). I also removed the long bolt from the Cube Pro tripod and then removed the plastic three-pronged knob from the bolt. As luck would have it, this bolt (it is metric-threaded of some sort, perhaps 10mm?) then barely fit through the Gitzo tripod's center hole where the other bolt had been without damaging the threaded hole, but also without falling back out. I was able to use that bolt to attach the Cube Pro mount head and voilà!, was in business for another test. Photos follow: 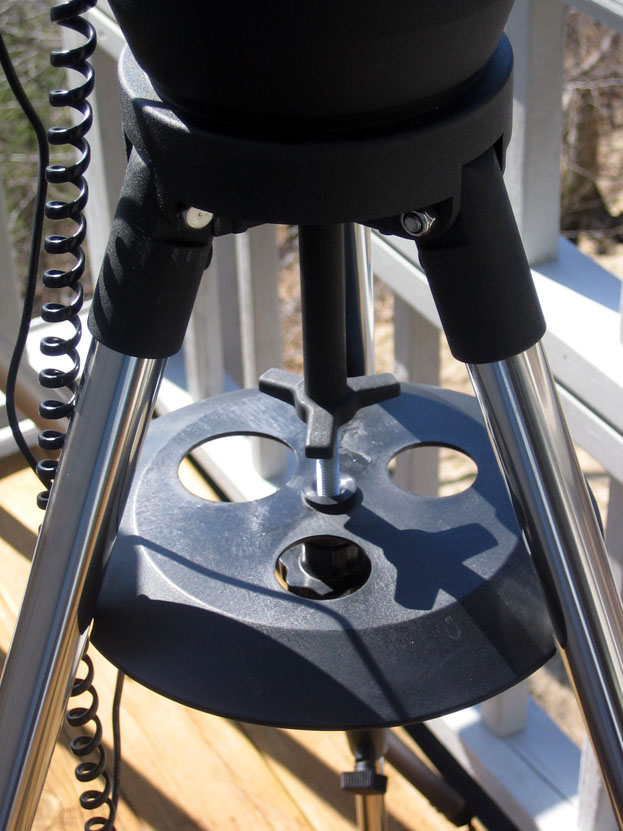 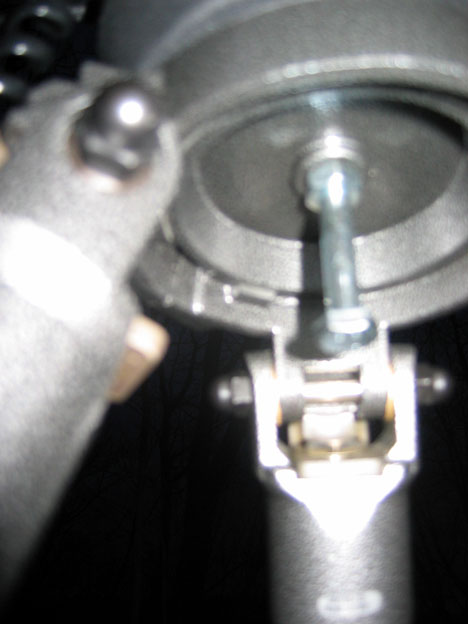 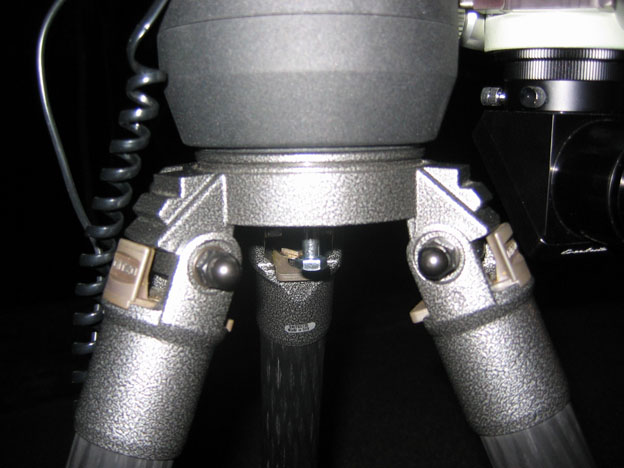 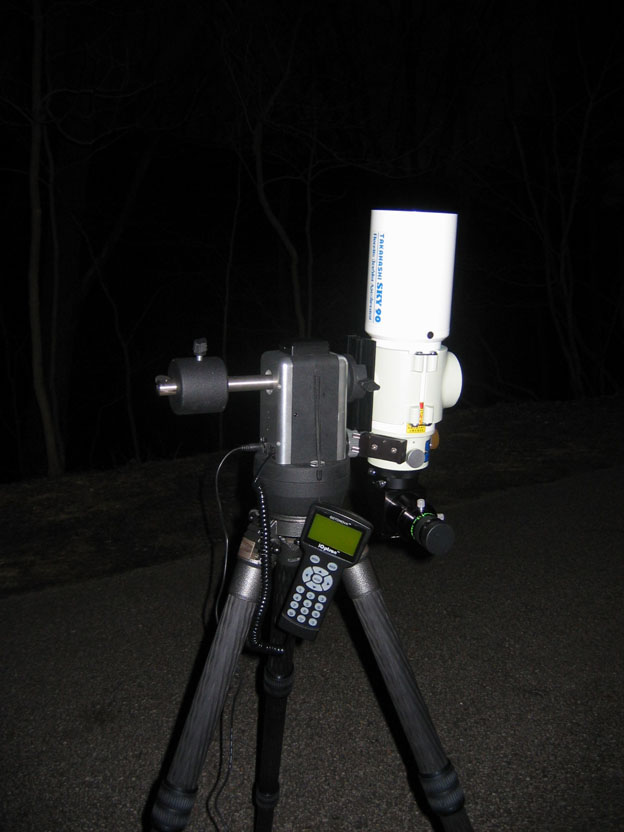 The remounted Cube Pro performed much better when re-rigged. The tripod made a big difference, as did placing the unit on the tarmac (with anti-vibration pads) rather than the wooden deck: 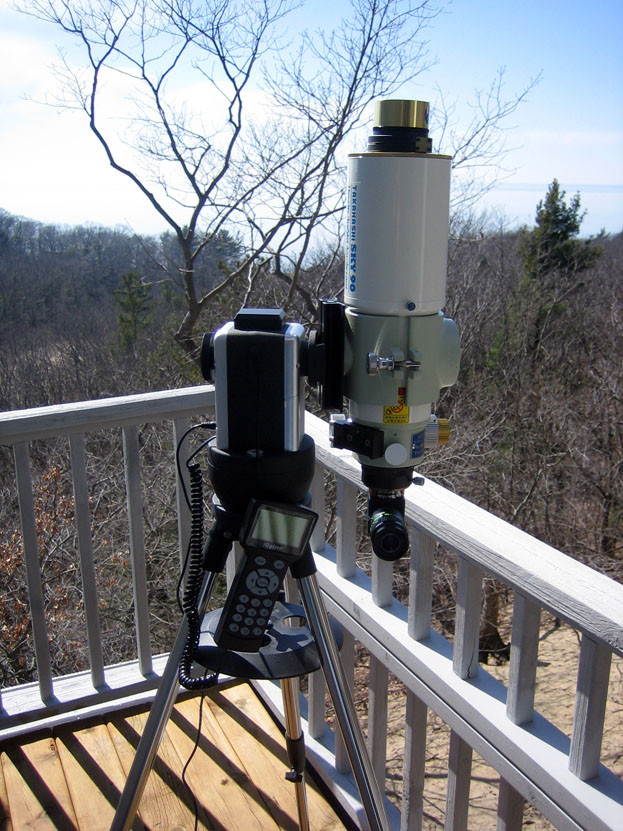 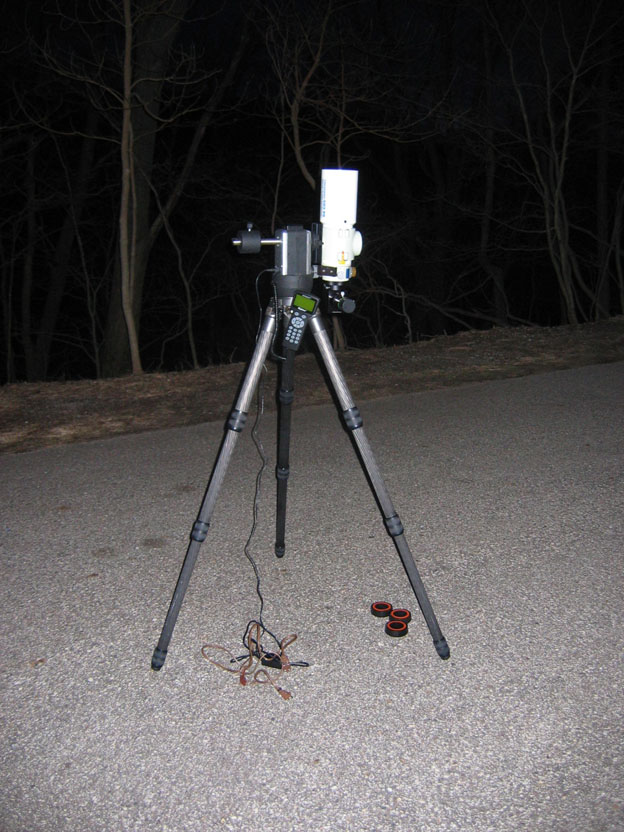 It is hard to say for sure, but adding the counterweight may have helped as well.

But the difficulty in focusing because of the extraordinary play in the altitude axis did not go away. As I had been communicating with representatives of iOptron in connection with my review of the MiniTower, I advised them of my dissatisfaction with the Cube Pro in this regard. They invited me to send the unit back for examination and offered to supply a replacement. I readily agreed. The altitude axis still remains somewhat loose, even on the replacement version, making it difficult, but no longer impossible. to focus my 90 mm refractor. It has been suggested that perhaps this is a weight issue, but that telescope is within the advertised limits for the Cube Pro. And I tightened the axis as hard as I could, using the supplied counterweight bar, which has a lever attached to it, but to no avail. Note also that while it turns out that there were issues with the software and the hand controller (see my Part 2 review of the iOptron MiniTower at this site), I was ultimately able to get that portion of the rig working in an acceptable manner.

Can I recommend one setup over the other? It is probably a matter of personal preference. Both are reasonably priced (the Cube Pro is a bit more expensive), and each has its advantages. The Cube Pro, when used with a better tripod, is more easily transported and less cumbersome to work with. It is light and easy to set up. Its "go to" function seems more accurate. But the Nexstar is more stable. The tracking of both mounts, though not great, was certainly acceptable, particularly in light of their prices. The Nexstar is oddly shaped and difficult to pack in a suitcase for travel by air. And the tripod that comes with the Nexstar can also be pretty shaky. I’m told that the Cube Pro has metal gears, which might provide additional stability and wear(perhaps the Nexstar does as well, I don't know). Both will work with batteries or power, and both will handle scopes up to about the same weight. Readers should keep in mind that the Nexstar unit I tested is several years old, having been purchased by me for occasional field use. Newer models might perform better. I decided to keep the Cube Pro, despite some misgivings, and of course already own the Nexstar. Too many mounts, but what the heck.

1 This is a different wooden deck than that from which I tested the MiniTower in Michigan.

2 Note that while the photos show the 90mm refractor with a sun filter attached, I did not test these mounts during daylight hours. I took the photos shortly after testing the iOptron MiniTower on the sun.