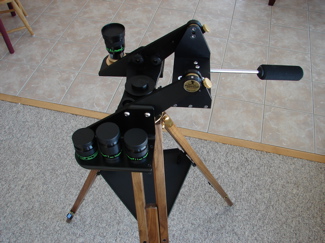 Mounts matter. A good mount can bring out the best in a mediocre telescope, but a poor mount will destroy the views in even the finest telescopes. An experienced astronomer will put as much or more thought into the purchase of a mount as into the telescope it will carry.

I never thought that I would buy another alt-az mount. My first telescope was a 6" dobsonian. I learned the sky by star-hopping from a horrible urban location. Though my skills improved with practice, there are many targets that I never found. The second mount was a Takahashi EM-10. It was rock-solid and reasonably portable--an observer's dream, but I was still a star-hopper. The third mount was alt-az, but this time it was a fully computerized goto system. I assumed that if I bought another mount, it would be a computerized equatorial system. Then I bought a small refractor.

The TV85 was my 4th scope, and I’ve since added a PST. The Panoramic is my 3rd mount, following an excellent EM-10 and a more-than-adequate Nextstar GPS forkmount (8”). I have been observing from the mosquito-laden skies of Minnesota for 15 years. 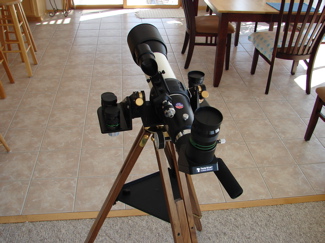 I initially bought the Panoramic mount because the purchase of my TV85 had left me too short on cash to buy the GEM that most interested me. I thought I would use it for a few months as a stop-gap, and then sell it. It has since become my favorite mount.

A stable alt-az mount makes the perfect companion for a small wide-field refractor. The owner of a small refractor values portability and ease of use. The Panoramic delivers both and more.

Weighing in at a mere 11 pounds, the Panoramic is barely heavier than the TV85, and yet it provides a very stable platform for viewing up to at least 200x. Adding the weight of the OTA and several eyepieces, I am out the door at just over 20 pounds.

The mount consists of a tripod, accessory tray and the Telepod head. The tripod is available in either ash or walnut. I purchased the latter and have had no regrets. The legs are well-built and adjust to allow viewing from approximately 3 to 5 feet in height. The trim on the walnut mount is brass, but will not patina as it is covered with a transparent urethane coating. The accessory tray is metal, and rides 13" under the top of the tripod. It connects to the legs with 3 bolts, meaning that removal for carrying takes a minute or so. I don't find it necessary to remove the accessory tray to get through even the narrowest of doors. The beauty of the walnut tripod is such that my refractor has taken up permanent residence in the living room without any complaints from my better half.

The telepod head consists of a cradle which swings on a rotating base, to which it is connected by adjustable-tension bearings. The cradle is pre-drilled to mate perfectly with Televue refractors. The internal width of the cradle is 5 1/4", defining the widest scope that the head will carry. The head is identical to that offered on the Telepod and the Gibraltar mounts. There are two 1/4" mounting holes, space 1 9/16" apart on center. The base of the cradle is predrilled to accept the included mount handle either on the right or the left side. The sides of the cradle are predrilled to accept the optional Sky Tour encoders and eyepiece caddies.

I recommend the eyepiece caddies enthusiastically. They accomodate three 1.25" and two 2" eyepieces without any perceptible increase in weight or bulk to the mount. Prior to ordering the caddies, I used the mount for several weeks. While it is possible to arrange one's eyepieces on the accessory tray, the ergonomics of having the eyepieces within inches of the OTA is well worth the price of admission ($65).

Tension is adjustable on both axes. You will likely be able to set and forget the azimuth axis tension. The altitude tension is adjusted with small knobs on both the right and the left. Practically speaking, you can work with one side or the other, but I tend to set both sides to roughly the same tension. Ease of use improves with practice. After a couple of sessions, I was changing the tension settings without thinking about it. If you use both 1.25" and 2" eyepieces, TeleVue's heavy bronze 2"-1.25" adapter ("The equalizer") is very handy. You will need to tighten the tension to remove heavier eyepieces so as to preserve balance. The equalizer adapter only helps to ensure that your next eyepiece weighs nearly the same as your last; it does not correct the imbalance which occurs when an eyepiece is removed.

The telepod head can be removed from the tripod and attached to any photographic tripod fitted with a 1/4-20 or a 3/8-16 top thread. Therefore, as light as the mount is, you can make it even more travel friendly if you desire.

All mounts have their limitations. I have noted several on the Panoramic. First, the trade off for a light weight tripod is thinner legs. I usually observe from the seated position. I tend to keep the legs extended about 10" and have no problems with stability. If I were to stand, the legs fully extended would probably not be adequate for the TV85 or a similar weight scope. In that case, the Gibralter tripod (9 lbs. heavier) would be a better choice. However, with a smaller scope, for example my PST, full extension of the tripod is not a problem. 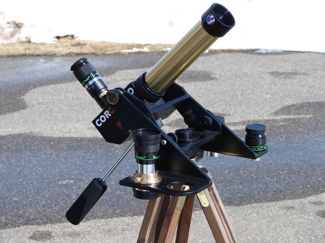 The second limitation concerns the altitude range. As you move toward the apex, the mount handle contacts the base. Removing the handle (it screws out quickly) allows for vertical or near-vertical viewing. Whether this is bothersome or not depends on the user. I tend to like guiding with the handle, whereas other Telepod users remove it and guide by moving the scope itself. For terrestrial viewing, the range is limited to 15 degrees below the horizon. At this point, the OTA contacts a rubber bumper on the top of the tripod designed to protect the scope. There are two possible ways to increase the potential down angle. One is to remove the bumper. This allows about 10 degrees more down angle, at the risk of scratching the scope. A more agreeable solution, in my opinion, would be to machine a metal block to raise the OTA above the cradle by 1-2". This would add significantly to the downward angle and preserve the benefit of the bumper.

In my opinion, the best mount is the one that you use. The Panoramic mount is more than adequate for a small refractor, and it is nearly overkill for my PST. Since buying the Panoramic, I have easily tripled my eyepiece time. It is so easy to grab and go that I just do. Further, the beauty of the mount is such that the scope is always in front of the living room window, waiting to grab a quick look at the woodpeckers, bluebirds, hawks and bald eagles that come for a visit. Set up equals removing the lens cover. It's that easy.