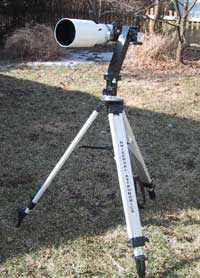 Note: All photos are mine and I have no financial interest in the vendor

By way of introduction, I have been an on-and-off amateur astronomer for the past 15 years. A few years back, the hobby got rekindled into anobsession by way of long-exposure astrophotography via a modified webcam. One thing led to another (as these things tend to do) and I had a Meade LX-90 and a SAC8 camera shortly thereafter. When I'm an hour away from my house and in a dark field (I live in the suburbs), I love the 8" SCT and camera setup. At my house is another story. Here, with trees blocking much of the view from any one position a ~60 lb scope and GOTO are less than ideal. Heft the scope to another spot (and I do mean heft) and GOTO is worthless until realigned. With at-home observing sessions being short (work, family, etc.), I wanted something lightweight, portable, and easy to use at the drop of a hat.

Given these goals, a small scope on an alt/az mount fits the bill quite well. The scope ended up being an APM/TMB 105 (105 mm, f/6.2 triplet) "lightweight". With rings, dovetail, diagonal, and red-dot finder, this model weighs in at about 12.5 lbs. After seeing the offerings from TeleVue and from Universal Astronomics in person and talking to several owners, I decided to give the Unistar a shot.

The basic side-mounted design of both is similar. Both consist of three aluminum components. The top portion of the mount holds the Teflon altitude bearing and is set at an angle away from vertical. This angle is key in that it allows the mount to reach zenith without interference from the tripod. At the junction between the top and middle portions of the mount is the Teflon azimuth bearing. Both bearings have friction adjustments. Finally, the bottom portion of the mount is an adapter that mates the tripod thread to the mount (various threads are available and the adapter is removable, so that you could use the mount on multiple tripods by using the appropriate adapter). 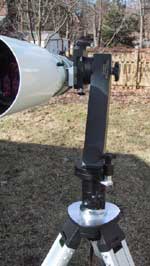 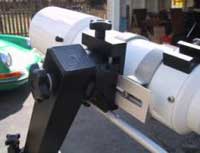 My initial purchase was the Unistar Light Deluxe on a D&S Pro Lift tripod. The setup was very light and portable (11 lbs total), but I was over the recommended weight limit by a few pounds and it showed. A phone call and I decided the Unistar on a Medium Surveyor tripod would do a lot better.

When the mount and tripod were unpacked, I was immediately impressed. This is a very nicely put together mount. The fit and finish are excellent. Solid, nice looking welds and a very nice black powder coat finish. While the Unistar Light I'd tried looked nice (fit and finish were certainly the same), everything about the Unistar is heavier duty and lends an impression of stability.

Likewise, despite being only 10 lbs, the brushed aluminum Medium Surveyor Tripod is very nice and solid. It mates to the mount with a 5/8" captive bolt (no tools needed) and has a collapsible spreader system (nice for getting through doors). Further, it comes with a strap that both holds the legs closed and acts as a shoulder strap for transportation. Minimum height is 25", maximum is 58", and folded length is 40".

For an alt/az mount like this, there are five basic questions that come up all the time concerning usability:

1) Together, the mount and tripod weigh 17 lbs. With my scope on there fully setup, the entire thing is about 29 lbs. We're easily 10 lbs less than a GEM setup. If the scope is already on the mount, total time from opening the back door to being ready to observe is about 30 seconds with no thought of throwing my back out. If the scope isn't already on the mount, make it under a minute and a half (I've marked the spot on the dovetail for the best balance point). One trip has the scope, mount, and eyepieces out to the spot. Spread the legs, loosen the dovetail clamp, side the scope on, tighten dovetail clamp, remove dewcap, insert eyepiece. Likewise, moving from place to place in the yard is a one-trip, sweatless affair.

2) In short, it's very stable. Running at 200x, damping times are about 2 s with a decent rap on the tube. Focusing is not a problem, even with a bit of wind. For what it's worth, my experience has been with the tripod legs retracted, as I sit when I observe.

3) Overall, it's very smooth and easy to pan around. By the time you get to 200x with the small FOV of an orthoscopic, I could wish that it were a bit smoother, at least in the azimuth direction (where I'm already running without friction). Specifically, it would be nice to be a bit easier to gently nudge the scope, overcome static friction, and place it exactly. My guess is that it would be nicer with a heavier scope, actually, as the PSI on the Teflon bearing is pretty low in my setup. Really, I'm looking for nits to pick here. I can still use 200x on an orthoscopic eyepiece on the planets with the scope. For an undriven alt/az mount, you can't really hope for more (unless you've spent $1200 on a Discmount).

4) I'm happy to report that changing eyepieces is not a problem in my setup at all. I can go from no eyepiece to my 1.2 lb BW-Optic without a problem and have a friction setting on the altitude bearing that is nice and smooth.

5) Zenith is not an issue. The mount will even go a few degrees past it without a problem.

Well, if you've read through all this, you'll see that I really didn't have anything negative to say. In use, the mount disappears. I don't think about moving it around to get a better view of a different part of the sky, as it's so light and easy to move. When at the eyepiece, I don't think about changing eyepieces, panning around, or anything else other than the view. In short, the mount doesn't really ever enter my thoughts. To my way of thinking, that's pretty high praise. The Unistar Deluxe does its job and does it well without any real quirks or problems to detract from what this is all about observing. Further, it does it at a reasonable price of $349 for the mount and $528 for my full setup with the tripod.