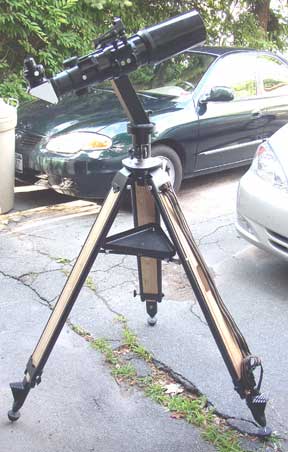 (I have no undisclosed interest in Universal Astronomics or its products and I purchased this item via normal channels. All included pictures are my property.)

Over the past year my desire for ease of use and increased aperture has dominated my telescope needs. I currently have four telescopes. My Celestron SPC-8 is my mainstay. I use it when I go to my club’s dark site observing sessions. I use my Celestron C102 f/10 for lunar, planetary, and double star observing. My two grab and go scopes are an Orion XT4.5 and a Stellarvue AT1010. Both Celestron scopes can be used with my Super Polaris mount and I occasionally mount the AT1010 on the Super Polaris as well. The AT is usually on a Televue Telepod that is on a Bogen tripod.

Out of the four scopes I use the XT and AT the most. I found that there could be months between uses of the SPC-8 as well as the C102. I felt these two scopes were severely underused. The problem was that I had to setup my Super Polaris to use them. Even though that didn’t really take all that long it still prevented me from using them and opting for one of my smaller grab and go scopes. The problem with using the XT or AT was that I would crave the aperture of my SPC-8 especially when looking at deep sky objects. This dilemma made me think that I would like to have more ease of use and flexibility for my SPC-8.

The alt–azimuth aspect of my XT and AT really appealed to me. The more I used these scopes that more I found myself enjoying star hopping as well as just pointing and looking. Both of those scopes have a wide field of view which made it quite easy to find objects in the sky. A while back I picked up a Celestron f/6.3 focal reducer for my SPC-8. It gave the scope nice wide field of view. The use of the focal reducer made me realize that the SPC-8 had the potential to be a great alt-azimuth scope. With this in mind I decided to purchase a Universal Astronomics Unistar. 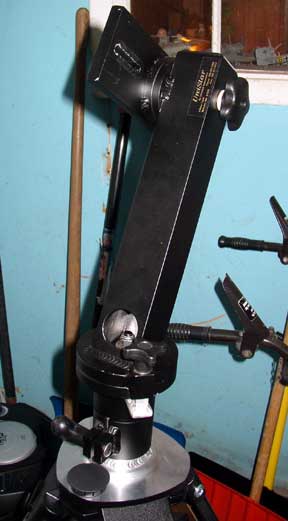 I emailed Larry at Universal Astronomics and asked him for some advice. My SPC-8 has a dovetail bar and bracket. The bracket is mounted on the tube and the bar bolts to the Super Polaris mount. I hoped the bar could be the basis for mounting my SPC-8 and AT1010 on the Unistar. Larry replied and thought the bar would work well with the Unistar Basic. It is designed for use with scope that has tube rings like my C102. After a few emails I decided to order the Unistar Basic along with a heavy duty surveyor tripod with a fixed spreader. I also asked if I could pick up the mount and tripod at the Northeast Astronomy Forum in Suffern, NY since he was going to be there when I was. This would save some shipping cost and Larry gave me a discount for picking it up at the show and paying cash. The total would be a bit over $500.

The transaction at the show was smooth. I brought my dovetail bar just to make sure it would work with the mount. As Larry had thought it fit fine. He also gave me a couple of different thumb screws for my tube rings and dovetail bar. While I was at the show I also bought a triangular accessory tray from Hands On Optics that I planned to attach to the spreader of the tripod. I picked up the goods when I left the show that day. When I got home I assembled the mount and tripod. Everything looked good. The next day I went to my local hardware store and bought a set of brackets that were designed to mount on a wall to hold broom handles. I used these to attach the tray I bought to the spreader. The tray can be put on and taken off easily.

The mount and tripod are very sturdy. The Unistar weighs seven pounds and the tripod weighs fifteen. The altitude and azimuth motions seemed smooth. There is a large bolt inside the mount that can be tightened or loosened to help adjust the azimuth tension. There are also external adjustment knobs for altitude and azimuth tension. Both motions can be locked in place with these knobs as well. The tripod has a slot in one of its legs that acts a carry handle. There is also a strap the can be buckled to hold the legs together. The strap runs the length of one of the legs and can be used for carrying the tripod. I tend to use it as a shoulder strap when I carry it. The length of the tripod legs is adjustable as well. 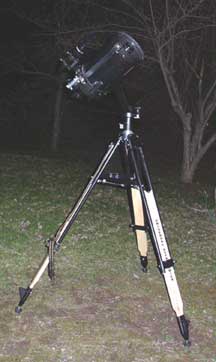 The day after I brought the Unistar home I was able to try it out with my SPC-8. I used my focal reducer and a 40mm Orion Sirius plossl eyepiece to get the widest view I could to make finding objects easier. As the April sky grew dark I viewed Saturn and Jupiter first. I used a 6mm University Optics orthoscopic eyepiece to get a close look at the planets. I wanted to see how easily I could move the mount while viewing at high power. The motion seemed a bit stiff. I also looked at Castor and Algeiba to see how the mount would move at higher power. After the sky grew dark enough I looked for a few deep sky objects to try the mount using a wider field of view. I had no problem finding M3, M81, and M82. The motion still seemed a bit stiff. After the session I emailed Larry about this. He replied that there is a break in period for the Teflon bearings and that the motion should get easier over time. He also said that my C102 f/10 may work a bit better with the mount than the shorter C8 tube since the tube length would offer more leverage. The next time I used the mount I again tried my SPC-8. This time I concentrated on deep sky objects at low power. That night I had a great time hunting down galaxies. The mount worked very well.

About a week after that session I decided to try my C102 on the mount. I would concentrate on Jupiter and the first gibbous moon. Larry was right about the longer tube being easier to move on the mount. The mount moved smoothly during high power viewing. I was lucky to catch a shadow transit of Io that evening. I recently used C102 on the Unistar to do an evening of double star observing. The mount worked very well during high power viewing. Both altitude and azimuth motions were smooth. I had no problem keeping tighter double stars in view. I also had a good session with my SPC-8 on the Unistar recently observing many deep sky objects as well as some double stars. The motions of the mount seem to be getting smoother as Larry predicted. Overall the motions seem to be a bit smoother when using the C102 when compared to the SPC-8.

I recently compared the motions of my XT4.5 to the Unistar. I modified the azimuth motion of my XT using magic sliders. At this point I would say that the motions of both are similar. I also compared the motions of the Unistar to my Telepod. To do this I finally got around to putting my AT1010 in the Unistar. To do this I have to bolt the AT to the dovetail bar of my SPC-8. This makes the focuser mount vertically. I also had to reposition its red dot finder. I observed the moon and a few double stars that evening. Again the motions were smooth and similar to the Telepod. I think I prefer the Telepod when I use the AT1010. The Telepod/Bogen tripod I have is lighter than the Unistar and I don’t have to take the time to bolt the AT to the dovetail bar and reposition the finder. Even though I can mount three of my scopes on the Unistar I think it will primarily be used with my SPC-8 and C102.

Overall I am quite pleased with my Unistar mount and tripod. It offers an added flexibility to my observing routine. Being able easily use my larger telescopes is a plus. The mount is sturdy, stable, easy to use, easy to setup. It is also easy to transport. It fits well in my Orion soft bag that I use for my C102. The motions of the mount have gotten smoother over time. The biggest asset of the mount is the ability to move easily from one place to another in my yard. If a tree gets in the way of what I want to observe all I do is pickup the tripod and move it to another spot. The Unistar has given me the ability to easily use any of my scopes at any time.