An Astrophotographer's Review of the 10MICRON GM2000 QCI 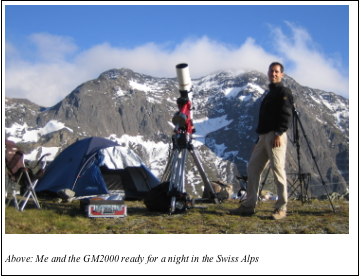 
Seasoned astrophotographers will tell you that in order to succeed in astrophotography you need three things: A good mount - a good mount - and did I mention, a good mount. This is a lesson I had to make the hard way! After battling with a fork-mount that showed a good 40 arc seconds of periodic error I was at a decision point. What would be more expensive- The therapy at a shrink I would need to continue the fight or the investment in a high-end German equatorial mount- I decided to go for the later. In December of 2006 a fellow astronomer wanted to sell his one year old GM2000 QCI Ultraportable mount and I took the chance.

Grab a good cup of coffee and a bagel and enjoy my review of the 10MICRON GM2000 QCI Ultraportable.


As stated in the title of this review I'm an astropotographer - so much that the only time I look through a telescope is to check the focus of my camera ;-) Astrophotograhers tend to look at astronomical equipment from a somewhat different angle, so if you are a purely visual observer this review might not be for you. I have been involved in astrophotography since the early nineties but have had success only with the advent of affordable digital cameras (DLSR and CCD).

Also note that I have no affiliation with 10MICRON or any other vendor of astronomy products - however I would be open to any kind of sponsorship or bribery ;-)


The GM2000 German equatorial mount made by the Italian company 10MICRON is a high-end mount in the league of beauties such as the Astro-Physics 900 and 1200, the Losmandy Titan or the Vixen New Atlux and others. The mount is rated for a photographic payload of around 40kg and a maximum payload of 50kg. A 12-" Schmidt-Cassegrain with a DSLR and a 4-" refractor as a guide scope don't really bother the GM2000. 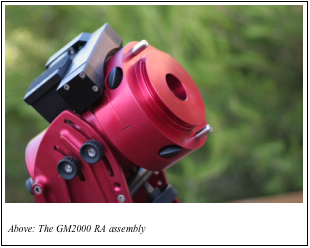 The interesting thing about the GM2000 is that it comes in two versions. The standard version is suited for the utilization in an observatory while the Ultraportable version of the GM2000 features a mount head than can be split in order to facilitate transport. The Ultraportable version weights 28kg, divisible in two pieces with the declination assembly of 13 kg and the RA assembly of 15 kg. Additionally 10MICRON offers a choice of different electronics and integration. The QCI controller I got features backlash free drives and a very powerful controller integrated into a compact electronics package that is located between the tripod and the equatorial head. 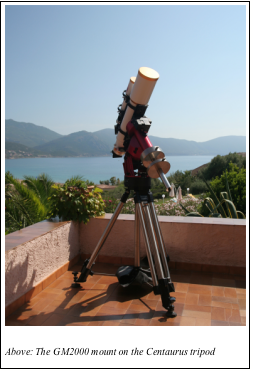 Once completely assembled the GM2000 is an impressive piece of machinery. The mount looks extremely sturdy while still being elegant - it becomes obvious that Italians make not only nice sports cars. The only external cables are the connections to the RA and the DEC motor and of course the cable to the power supply.

All components except for the tripod are delivered in very rugged flight cased. Theoretically you could take the GM2000 with you on a plane but I guess the excess baggage weight of the GM2000 will ruin you. The Centaurus tripod comes in a padded transport bag that is quite handy and frankly the only feasible way to have at least a chance of lifting this 25kg monster.


The hand controller has the right size in order to be operated with gloves on. Especially the large keys make a big difference compared to other hand controllers on the market. However, should you have smaller hands the controller might be a little large for you.

The menu structure is absolutely simple and anyone that has operated a computerized mount before will feel at home after the first night out. The electronics feature all the usual features such as PEC and a large object catalog. Additionally the QCI controller features a very efficient and precise polar-alignment routine. The mount can be alignment with two up to eight stars. After an eight star alignment the GOTO performance is somewhere in the range of a few arc seconds. Enough to put any object in the middle of any CCD or DSLR sensor. Also important to astrophotographers using German Equatorial mounts is the possibility to configure the meridan flip. The mount will though track well beyond the meridian without bothering you. The best feature of the electronics package for me is the fact that they yet have to let me down. Nothing can be more of an annoyance than a software problem just after you completed an hour worth of alignment. 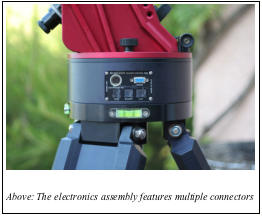 As external connections the QCI electronics features ports for network attachment (very useful if you operate the mount in an observatory), guider, GPS (that can also be configured as a serial port) and a RS232 serial port. Since the mount speaks both the Meade LX200 and the Astro-Physics protocol most applications will be able to talk to the GM2000 without any problem. Noteworthy is also the fact that the connections to the controller and the power supply are of the screw-in type. This method of connection greatly reduces the risk of accidentally ripping out an important cable. 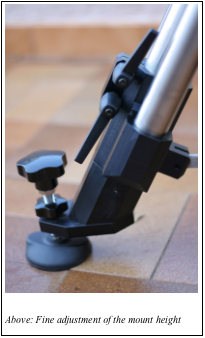 The GM2000 mount is best operated on the Centaurus tripod also by 10MICRON. This tripod really is a piece of art and deserves it's own section in this review! The Centaurus can house all electronics in a dedicated ãhat-" that fits on top of the tripod. I have to admit that I have seen large tripods before but the Centarus is whole different animal. It is extremely sturdy yet easy to set up. The tripod features several priceless features actually all manufacturers should incorporate into their products. For astrophotographers the availability of two water-scales and knobs for fine adjustment of the individual leg height are extremely valuable.

Within seconds the tripod is perfectly leveled without the need of additional tools or the need for extending individual tripod legs. The tripod delivers a vibration free platform for photography - bumping against it in the dark won't move the GM2000 a bit, but it really does hurt you!

Every aspect of the GM2000 shows it's quality. The electronic circuits were built to industrial specs meaning that components were used that function at far wider temperature ranges than the normal end-user components used in many of the large vendors mounts would. If you ever experienced the sluggish behavior of a Meade LX200 control panel at temperatures below 0¡ Celsius you know what I mean. I have worked with the GM2000 at temperatures of -16¡C without problems. Another aspect of the mounts rugged design is that it can take some punishment. I have the tendency to drop all sorts of expensive equipment to concrete floors. The GM2000 QCI controller dropped at least three times from 1.5m without even bothering - certainly my kind of equipment :-)

Performance in the field


As stated Below the GM2000 Ultraportable fits into a normal car and can be transported also by non-weightlifters. Once out of the car and it's flight cases, the GM2000 is set up and leveled within minutes and without the need for any tools.


As stated the Ultraportable version of the GM2000 has been designed with the traveling astronomer in mind. Living close to the Alps I frequently travel to high mountain sites where the air is thin and light pollution minimal. Broken up into smaller pieces the GM2000 really is portable - though the term ultraportable that gave the Ultraportable it's name would be more suited for a Vixen GP. Tripod and mount head will easily fit into most cars. By far the heaviest part and literally a pain in the neck is the super massive Centaurus tripod. However 10MICRON released a carbon-fiber version of the Centaurus that reduces the weight from 25kg to 16kg.

I think the best prove for the GM2000's portability is the fact that it has traveled with me from the highest mountain passes in Switzerland down to the island of Corsica in the Mediterranean. 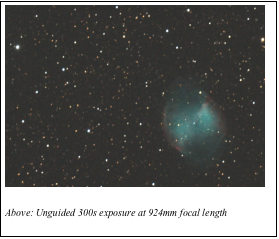 10MICRON states the tracking accuracy of the GM2000 at around +/- 3 to 4 arc seconds without PEC. I found that the periodic error of my mount is somewhere in the range of 6 arc seconds peak to peak. For me that is accurate enough to allow for unguided exposures of five minutes at a focal length of 925mm and a resolution of 1.43 arc seconds per pixel. Here is an unprocessed crop of an unguided exposure of five minutes. With an autoguider (preferably connected using the ST-4 interface rather than the serial LX200 one) you will get pinpoint stars even with larger instruments.


The GM2000 QCI Ultraportable is a large yet portable mount well suited for astrophotography with heavier equipment such as large Schmidt-Cassegrains or refractors. Built quality and reliability are at an excellent level. If you look for a very accurate mount to do long exposure photography using larger optics and don't have the luxury of a permanent observatory the GM2000 Ultraport may be just what you have been looking for.


- Centaurus tripod is very heavy - invest into the carbon fiber version if you can
- Not really on the cheap side...


http://www.10micron.com/ Website of the manufacturer with additional details of the mount
http://www.astroslacker.ch/ My website with several pictures taken with the GM2000