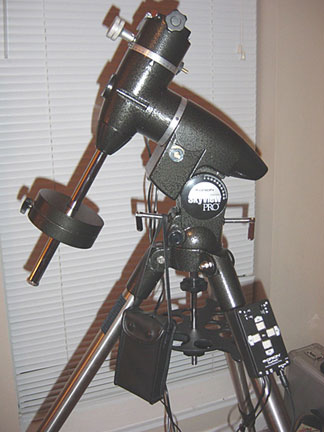 When I ordered my Orion SkyView Pro 100mm refractor last fall, I anticipated the arrival of the mount just as much as the telescope itself. Having owned many cheap, flimsy equatorial mounts over the years, I was anxious to see how the beefy-looking SkyView Pro mount would perform. It certainly looked heavy-duty in the Orion catalogs, so I was confident it would be a great mount.

The SkyView Pro mount features a sturdy tripod consisting of 1.5" diameter steel tubular legs. I've heard that Orion has recently been including even larger legs with these mounts. Each leg can extend an extra 10" at the bottom. The spreader tray is all metal and includes space to store five 1.25" eyepieces and two 2" eyepieces. The SkyView Pro mount itself is metal, with the exception of the plastic slow motion knobs, azimuth adjustment knobs, polar alignment scope cover, and right ascension drive cover. The polar alignment scope is an optional accessory, as are the motor drives. Single-axis and dual-axis drives are available from Orion. The SkyView Pro's setting circles are 86mm in diameter and lock by tightening two small thumbscrews on each circle. Latitude adjustment is made via two L-bolts.

For telescope mounting, the SkyView Pro features a quick-release dovetail mounting system, and Orion rates this mount with a payload capacity of up to 20 lbs. My telescope/mount package arrived with a single 7.5 lb counterweight, and additional weights are available from Orion.

I have "accessorized" my SkyView Pro mount a little since I received it. I installed Orion's dual-axis drive system, inserted a polar alignment scope, and changed the plastic slow motion knobs to nicer aluminum ones.

The SkyView Pro mount doesn’t disappoint! This mount is extremely sturdy. I discovered that rapping a tripod leg resulted in vibrations dampening in a second or less with my small refractor. A larger, heavier instrument would most likely take a little more time to settle. After repeated use on my driveway, I discovered that the vibrations took a little longer to settle. I finally discovered that this was because my driveway had caused the rubber tips of the tripod legs to wear off. After I bought a set of vibration suppression pads, the mount was back to its old self again, with vibrations dampening in less than a second. I have since sold my 100mm refractor and I now use Orion's 80mm ED refractor on the SkyView Pro mount. I switched from a 6x30 finder to a 9x50; I also upgraded to a heavy 2" diagonal. I find that even with this additional weight, vibrations still dampen in a second or less. That's very impressive to me!

When the right ascension and declination axes are locked, they stay very secure until I unlock them. The slow motion knobs turn the axes very easily and smoothly. As I mentioned, I installed the dual-axis drive on this mount. I found the installation to be very simple and straightforward. The right ascension drive tracks extremely well, but I did find a bit of play in the drives when using the hand controller to move the scope in right ascension and declination. After disassembling the mount a bit and tightening up the worm shafts, I was able to minimize the play. 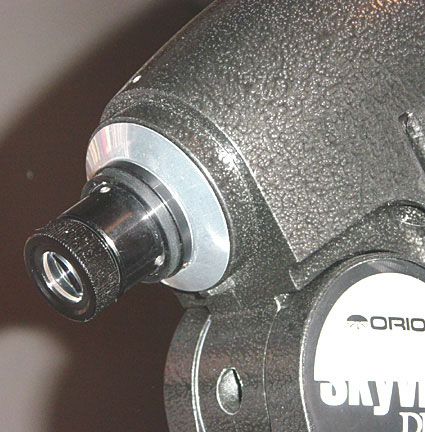 The optional polar alignment scope is a little frustrating to set up. The procedure for keeping it centered while the right ascension drive rotates is time-consuming and should be simplified. It involves adjusting three tiny Allen screws. But the actual use of the scope to zero in on Polaris is very easy. I do think an illuminated polar alignment scope would be better to use, but that's just my personal preference. The polar alignment scope Orion offers for the SkyView Pro mount does a fine job once it's installed.

Although this mount is extremely sturdy, it isn't so heavy that an observer can't carry the whole thing outside completely assembled. My mount and telescope combination probably weighs around 40-45 lbs, and I find it easy to carry outside. I have to remove the spreader tray so I can close the legs a bit in order to navigate through doorways and around corners; however, this won't be an issue if an observer stores the assembly in a garage or somewhere else that doesn't require going through doorways and down halls. 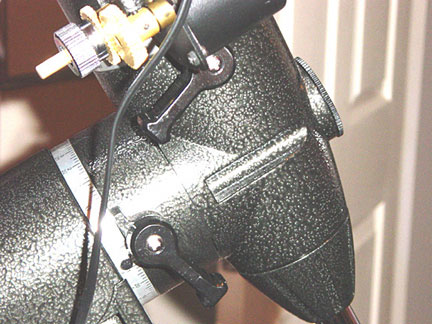 One minor issue I discovered with the SkyView Pro mount is that when I unlock the axes in order to move the telescope into another position, the declination axis tends to tighten itself. This is simply caused by gravity pulling down on the lock knob, causing it to tighten a bit. This is easily fixed by removing the lock knob (by unscrewing the single Phillips screw) and repositioning it so that its down position is unlocked. However, I am unable to do this with my setup simply because the declination motor can prevent the knob from being in its fully locked position, depending on where the telescope is pointed. I consider this a very minor problem, though. 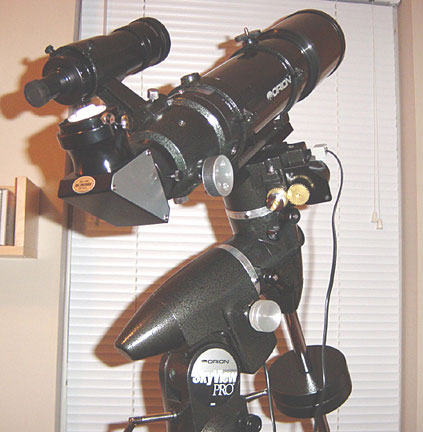 In conclusion, I think the SkyView Pro mount is an excellent mount, especially for the price ($329 without accessories). Its stability is a very welcome change from other shaky, low-end equatorial mounts. I feel this mount will serve me well through a variety of telescopes, and I highly recommend it to anybody wanting a stable mount for a small telescope.

Bill Grass
February 12, 2004
(I have no affiliation with Orion Telescopes & Binoculars. All photos were taken by me.)

I recently began testing the SkyView Proís setting circles. Iíve never really used setting circles before to find celestial objects because I enjoy starhopping. But just out of curiosity (and also because Iíve heard that setting circles are sometimes not very accurate), I decided to experiment with them.

I was pleased to discover that the SkyView Proís setting circles are very accurate. Over the course of a few nights, I pointed my telescope at a familiar star and adjusted the setting circles to match the starís coordinates. (This was done after precise polar alignment, of course.) I then used several different objects spread throughout the sky to test the accuracy of the setting circles. I discovered that using the setting circles results in the target objects being in the field of view of my 25mm eyepiece (which is just over 2 degrees) almost every time.
Clear, dark skies!