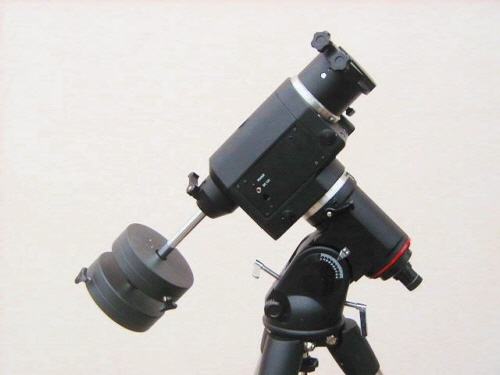 The first rumours regarding a new heavy-duty mount from Synta began to spread during year 2000, but it was Spring 2001 before some preview mounts appeared. The first, real things has been on sale only since last 2001 quarter.

Mine arrived home on December 21, 2001, together with a friend's second mount; third one wasn't yet available and latest news from seller say end of January 2002: it looks like that demand is quite high and at the same time Synta's factory has moved on a new location, causing a temporary EQ-6 shortage.

The mount arrives in two cardboard boxes (double boxes, actually, one within the other), the first containing the head, the handpad and the battery case; the second with the tripod and two counterweights.

EQ-6 technical specification can be summarised as follows (weights and sizes are rounded off: I didn't bother to write down precise numbers):

Despite its weight and size (see the "family album" below), this mount can be set up quite easily. Starting from boxes it took me less than 20 minutes to have it ready for my C9.25 (I used a compass for polar alignment, since it was daylight). Usually, it should take no more than 10-15 minutes to setup at night. By the way, the Vixen-compatible rail fitted without problems on the EQ-6 railplate; other people reported some minor problems with other thicker rails. The railplate has two locking knobs which ensure a better grip and more security. 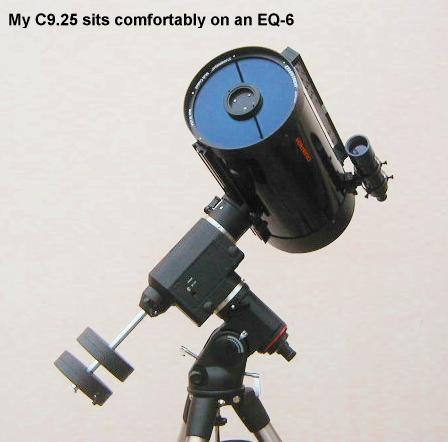 The tripod is quite sturdy and very similar to those used by Meade for its LX200 scopes (8" and 10"); once tightened everything you can really appreciate the difference with those (in)famous aluminium tripod of smaller Synta mounts. Personally I would have preferred thicker tube walls, but anyway it's a really good tripod. The leg spreader has five 1.25" holes and two 2" ones, so it can be used to park up to eight eyepieces. On the mounting plate there's a "nail" protruding which serves for azimuth fine tuning: it's interesting to note that it can be screwed on two different positions, so you can choose between having the "central" leg aiming South (the default, which allows for more conformable observation) or North (which allows for more comfortable use of the polar finder). 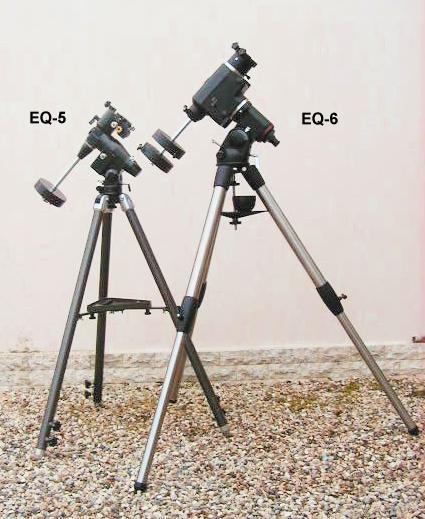 Thanks to the four bearings on which both axes are mounted, movements are quite smooth even with heavy instruments; worms, too, are mounted on two ball bearings each, visible if you remove the protective screw caps covering them. The mesh between the worms and their gears can (but usually does not need to) be adjusted acting on the four Allen bolts visible on the plates near the setting circles and the small Allen nut on the opposite side of the worms.

It's interesting to note that both worms have a short shaft (see image below on left) protruding on the connector plate side, hidden under the two screw caps: it may turn out to be useful for something... 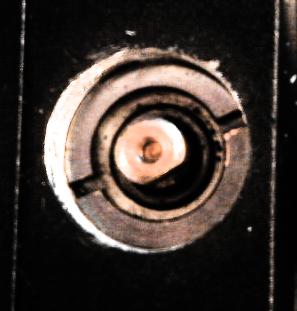 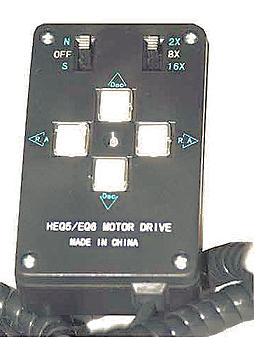 The electronics is mostly located under the connector plate, which has only a LED, a 12 V DC input connector and a RJ-type one for the handpad. This is connected through a spiral cable and sports four buttons, a LED, a North-Off-South switch and the correction speed selector (2x, 8x and 16x). Within the handpad is concealed an AT89C2051 programmable microcontroller: it looks like it's the responsible for the generation of pulse trains which are then amplified and sent to the motors by the electronic board under the connector plate. Could it be that someone will try to reprogram this controller to obtain, e.g., different correction speeds or (am I dreaming too far?) backlash compensation? Time will pronounce... 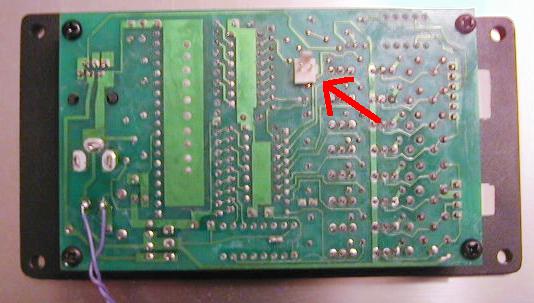 Interesting note: the electronic boards has a small, two pole connector (indicated by a red arrow in the above image) located perfectly on-axis with the polar finder hole in Dec. shaft; this connector is always powered (as long as you have the power cord plugged in, of course...) and outputs about 11-12 V DC: it looks like this was designed for a polar finder illuminator, and hence is quite straightforward to pick up a red micro-LED and a resistor (or a 1 kOhm trimmer) of adequate value, solder them to this connector and voilà: you have your illuminated polar finder for just less than one dollar (actually, I should say one Euro :-)). I wonder why Synta choose not to mount it by default...

Talking about the polar finder, the one which comes with EQ-6 mounts is of better quality with respect to its brothers found on smaller Synta mounts (EQ-3, -4 , -5). It has a larger objective lens (twice as large, actually), independent focusing for sky and reticule, a Vixen-like reticule pattern for both hemispheres, and it looks like it does not need to be aligned since it simply screws within the hollow R.A. shaft. Note: some mounts have been sent with the older an smaller polar finder (see bottom left image below, picturing my old EQ-5 polar finder); at least, I've seen a couple of them so arranged and heard of other people who have the lesser model. On those mounts I've seen, the rounded black plastic screw cap is shorter and there's a black, loose ring beside the red one, while on "standard" mounts the cap is longer and there are no loose rings anywhere. I don't know why there are these differences. 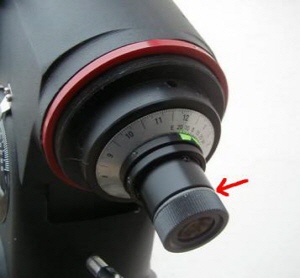 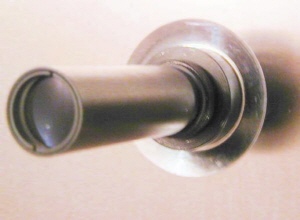 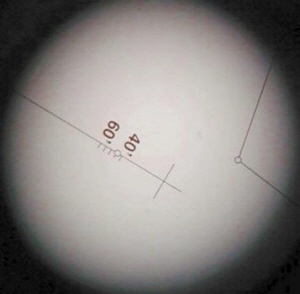 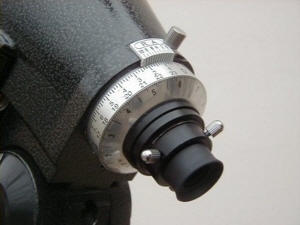 EQ-6 polar finder has two defects, one small and one big: the small one is that the focusing eyepiece is quite wobbly unless fully screwed in, hence causing noticeable polar alignment errors. I solved this problem simply by inserting an O-ring (indicated by a red arrow in the upper left image above) and then tightening the eyepiece. The big defect is really big, so big that everyone in the world has noticed it. Everyone except Synta, more precisely. The polar finder comes with its day/month scale, the longitude correction vernier, but no hour setting circle! On smaller Synta mount the R.A. circle was used for this: you just locked it in "zero" position and you were done. But on EQ-6 R.A. circle is on the other end of its axis; moreover, it can't be locked so it does not turn with the mount. The conclusion is that you simply can't precisely align the mount for a given hour/date. I'm still wondering how Synta overlooked all this.

There's a solution, though: glue a home-made day/month scale on the large red ring and a hour scale on mount's body just above the red ring; then, you must initialise the polar finder It's likely you will have to subscribe to see it). I wasn't the only one who had the same idea, of course, and another Italian amateur astronomer - Renzo del Rosso - actually preceded me in drawing a whole set of suitable scales along with some verniers for the A.R. circles (ah, I forgot to mention that settings circles do not have verniers, which is a pity because those circles are quite useable: with good verniers you could easily reach a 0.25° aiming precision) .

By the way, this way one has much bigger setting circles, which helps precision as well as people with less then eagle-like eyes...

Another small but stupid "defect": there's no bubble level. If you align your mount using Bigourdan method or similar, you don't actually need one, nor you need one if you use a permanent setup. But if you want to correctly use the polar finder, you'll have to perform at least a East-West repeatable levelling (North-South levelling is not really necessary, since you can simply act on latitude regulation). A trip to your favourite hardware store will help. but I'd have preferred a built-in solution. Are you listening, Mr. Synta?

A practical test session showed that this is actually a good mount, despite the above defects. With tripod at half extension, I knocked the C9.25 OTA and vibrations damped within 3-4 seconds; I've noticed, though, that there was a "resonance" with a period of about 1 second which has its source in the tripod itself: at different lengths, and particularly at minimum, this tend to disappear. I must note that my mount was setup over my frozen, pebble-covered backyard: it was like being on a concrete pavement...

Aiming to an object in the sky was easy, and the locking levers act quite well and precisely, you can even regulate how much friction to apply, but I have noticed that when you tighten them, the corresponding axis rotate a small amount. This has been reported by several people, so it must be a design flaw, unfortunately. I strongly suspect that this is due to the fact that the locking screw directly push on their axis (on EQ-3 and EQ-5 there where plastic buttons in between), so that a "side" of their end touches the axis a little before the rest and hence it "pulls" it a while before everything is fully blocked (sorry, I can't explain it better in English). I'll try to insert a small hard plastic button and see if it makes any difference. Otherwise, it could be necessary to rework locking screws ends. Again, are you listening, Mr. Synta?

The retractable counterweight shaft comes in handy when you must carry or store the head; I would have preferred, though, one with a larger diameter (18 mm seem so few for such a mount), given that a Dec. shaft with 6 mm walls -instead of the 10 mm ones it has now- would allow for a 25 mm (1") shaft: if you load an EQ-6 at its maximum, you will need three or four counterweights, all on a relatively thin bar. It will not break, of course, but nevertheless...

Both motors run almost noiselessly: you only hear the Dec. drive when you reverse direction (at 2x speed; at 16x backlash compensation time is so short, you simply can't notice it) and a click from R.A. drive relays when you press handpad A.R. buttons. Dec. backlash is fairly good, given the presence of a 132:1 gear reduction. At 2x it took 3 or 4 seconds to keep up, while at 16x it's almost undetectable. 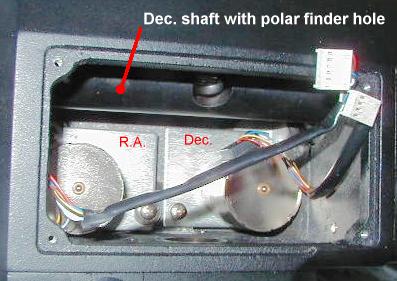 Least but not last, periodic error. On Monday, January 14 2002, two friends of mine and I decided to measure the amount of periodic error of our mounts. We took some stars images with my C9.25 and a HX-516 CCD camera, which I then analysed. Unfortunately, the floppy disk containing the first image taken with my mount has gone nuts, while the second image clearly shows that my battery was dying... call it misfortune.

Anyway, the test on the second mount and what I can remember of the first image speak quite clear: as other people visually esteemed, EQ-6 mounts show a fairly good periodic error of less than 16" (peak to peak): a pretty good value, given the quite low price of this mount. Image below shows how it performed (it's a 9 minutes exposure; 8 minutes are the period, 1 just because one never knows...). 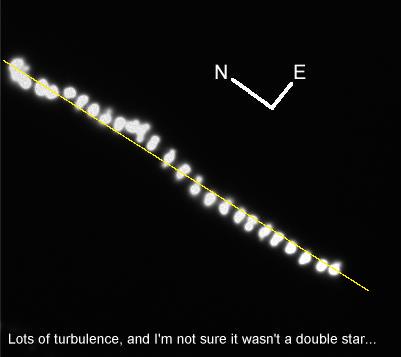 All in all, Synta EQ-6 has turned out to be a pretty good mount for the price, though I'd like to see the manufacturer to correct those "youth" defects noted above. With its standard drives and handpad it can be profitably used for visual observation and planetary imaging (or even relatively long exposures with not too long photographic lenses piggybacked on main instrument).