In the past decade there's been a tremendous surge in the availability of computerized telescopes. The earliest popular players were the LX200 by Meade and the Ultima 2000 by Celestron. Both consisted of Schmidt-Cassegrain optical tubes permanently attached to computerized fork mounts. Fork mounts and computers were an obvious marriage, as the computer permits the mount to track accurately in the very simple and inexpensive (and stable) altitude/azimuth configuration. To this date the fork mounted SCT as implemented in the current models by Meade and Celestron is still the most common portable computerized setup; a visit to the Club site on any public night will demonstrate that!

Those wishing for computerized equatorial operation have also had a variety of instruments from which to choose. One common EQ setup involves any of the above fork mounted instruments with the addition of a wedge. The other popular system is the German equatorial mount. The GEM has one important advantage; the optical tube is not permanently installed and a variety of different optical tubes may be used in turn on one mount. Because of the increased complexity and the greater difficulty in achieving mechanical stability in a GEM, these have tended to be much heavier and more expensive than their fork mounted brethren.

Meade shook things up a little when they introduced their LXD55 GEM a couple of years ago. It was a clone of the Vixen, beefed up enough to (barely) handle 30 pounds of payload and equipped with the Autostar control system. Since they subsequently dropped the premium LXD650/750 GEMs this became Meade's only presence in the computerized GEM market. Because of the flexibility of a GEM, it was offered with a variety of optical tubes, including a Schmidt-Cassegrain, several Schmidt-Newtonians, and a couple of midsized refractors. Selling for a fraction of the cost of a computerized Vixen mount, it immediately attracted plenty of market attention. Reliability issues and a flimsy tripod caused some concerns, but many users, including myself, reported fine performance from this bargain mount.

The The New Generation of Computerized German EQ Mounts 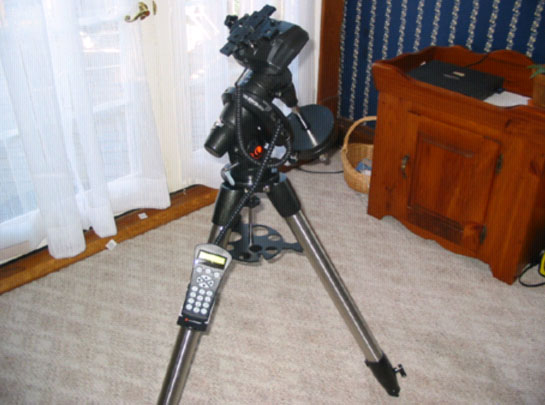 More recently, three new computerized GEMs have been introduced and are the focus of this article. Celestron brought out their Advanced Series GEM in response to the LXD55. It is also a beefed-up Vixen clone and is offered with a variety of optical tubes, including several Newtonians, a refractor, and a couple of SCT's. Responding to the one major weakness folks had found in the LXD55, Celestron added a very sturdy, steel-legged tripod. Recognizing that a substantial portion of the GEM market consists of folks wanting to do imaging, they also incorporated an autoguider input. For smoother tracking, they added bearings to the RA axis. The end result is a substantial improvement over the LXD55.

This model does not come with a polar alignment scope, relying instead on built-in polar alignment routines which use the main telescope. Smooth tracking, greater stability, and a more integrated look make this a more satisfying mount to set up and use than the LXD55. Mine has worked very well out of the box, with no adjustments or fiddling required. It uses the same handbox hardware as the most expensive Celestron models, with firmware specific to this mount. Thus it offers all the same functionality of the higher-end telescopes plus the controls are familiar to anyone who uses other current Celestron models. The Advanced Series Mount (CG5-GT) sells for about $750 with no optical tube. 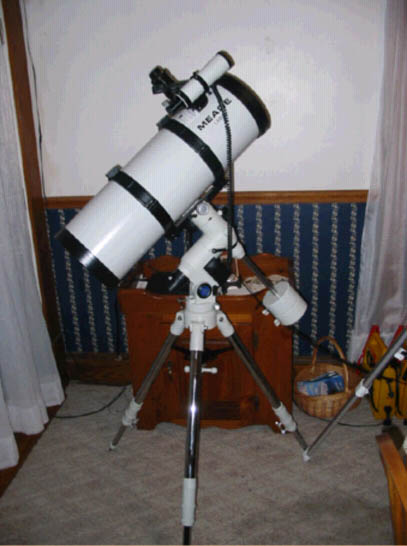 Meade's response to the Advanced Series is their new LXD75. This Vixen clone replaced the LXD55 with several important upgrades. It includes a better tripod with steel legs which are smaller than those on Celestron's offering but a huge step up from what was supplied with the LXD55. The new mount has bearings in both axes for smooth motion and reduced wear. It is equipped with both an illuminated polar alignment scope (with an illuminator much improved from the one supplied with the LXD55) and with polar alignment routines in the firmware. This gives the operator the choice of which method to use. Although not equipped with a conventional autoguider input, the LXD75s are supplied with Meade's LPI package. This consists of a webcam-like imaging camera and a software suite which can use the LPI camera to autoguide the LXD75. In another nod to the imaging market, Meade also added Periodic Error Correction to the system. Another change was a switch to the color white for the metal parts, probably in response to the next mount in the lineup - the Vixen Sphynx. Like the Celestron, my LXD75 worked fine from the beginning with no fiddling. The LXD75 mount isn't offered alone, but in bundles it is similar in price to the Celestron. 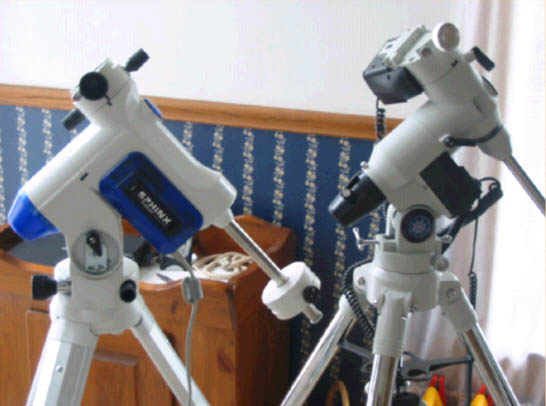 Perhaps in response to the major American players, Vixen has recently added a new medium-weight GEM to their lineup. With the same capacity as the GP/DX, the new Sphynx mount is a complete redesign and is much more modern in both form and function than the earlier Vixen or its clones. It's very distinctive in appearance; the metal is white with blue trim, and both drive motors are enclosed within the mount in such a position as to act as counterweights. This permits a shorter counterweight shaft and lighter weights for the same payload than the earlier design. The real attention-getter is the handbox, though.

Like the Sky Sensor 2000 supplied with the previous mounts, the handbox is much larger than those supplied with the clone mounts. Unlike the SS2K, however, the Sphynx handbox has a large color LCD screen which is used to display star charts! An object or location is chosen, and the mount is instructed to slew to that object. This has a very high ÒcoolÓ factor, of course. The drives are much quieter than those in the clone mounts, making it seem even more sophisticated when compared to them. An autoguider input is provided but to this date the firmware necessary to implement this has not been released by Vixen. Except for the nonfunctional autoguide port, this Sphynx has been flawless out of the box. The price of the Sphynx mount is about $2300.

I have no affiliation with any of the manufacturers mentioned in this article, nor with any of their dealers. The Vixen Sphynx mount was provided by Astronomics for review. The CG5-GT was provided by Digitec Optical for review but was subsequently purchased by myself. The LXD75 was purchased by me from OPT. All photographs in the article are my property and permission is granted to Cloudy Nights to use them in this context. This article was first published in the ÒNight SkyÓ, the newsletter of the Astronomy Club of Akron, Ohio in October, 2004.