Hello. No, not dead yet. (“Day ain’t over yet,” said Curly) Just got tired of doing reviews as it was taking up time from the family and the practice, and from observing. Both kids now out and about, and Mike and I began discussing things. One thing led to another, and inter alia, to a pair of new TMBs (92.5 and 130 SS, but that it for later.) I said, “why not, after all, this lets you be an curmudgeon to a much wider group than your family and colleagues.

For those of you who recall my scribbling from before, I am not a fan of GEM mounts, prefer alt-az for my visual observing, and like whatever will help me save time in setup that I can otherwise devote to observing. To that end, and as my lovely wife put the kibosh on a permanent site outside, I kept lusting after a good portable pier. So there begins the tale.

I think I have found one that is: a) inexpensive,

nicely put together for the price , c) the fastest setup I have ever experienced with a portable pier – by a factor of many multiples, and d) stable and with a very good range of heights.

Sold by Tech 2000 the “Quick Draw” Portable Pier comes in two basic versions. The cheaper version is made of Cellcore , weighs 11 pounds and has a 50 pound capacity. Height range is 37 to 57”. The price is $299. For a hundred dollars more, you get an aluminum tube, with a 100 pound capacity and an extra 4” of available height. The pier has Losmandy style slots, and for $59, you can get a mounting plate that comes with your choice of center mounting hole. I chose one for my trusty GIRO 2 and chose the aluminum version.

Turn around was a week. When I unpacked, everything was in good order, well protected, and as ordered. The folded pier is shown below: 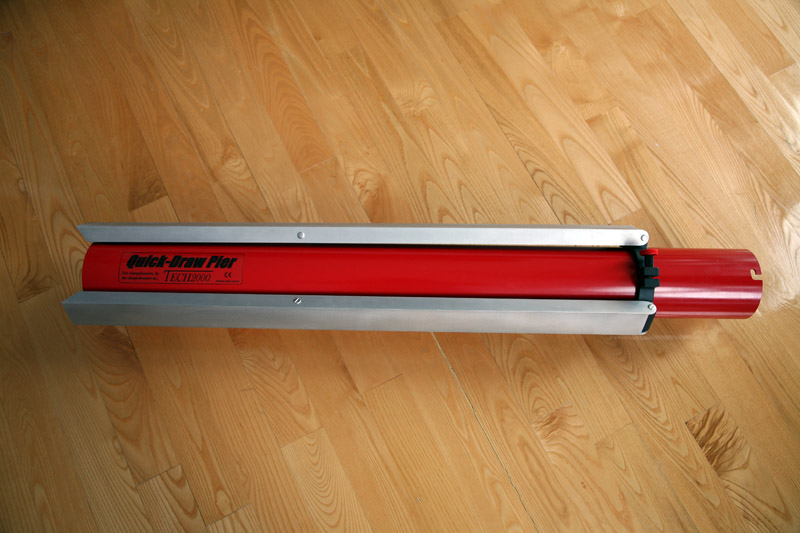 The mounting plate, which slotted in easily, is shown below, with a twin arm GIRO 2 bolted on . The fastening was very secure: 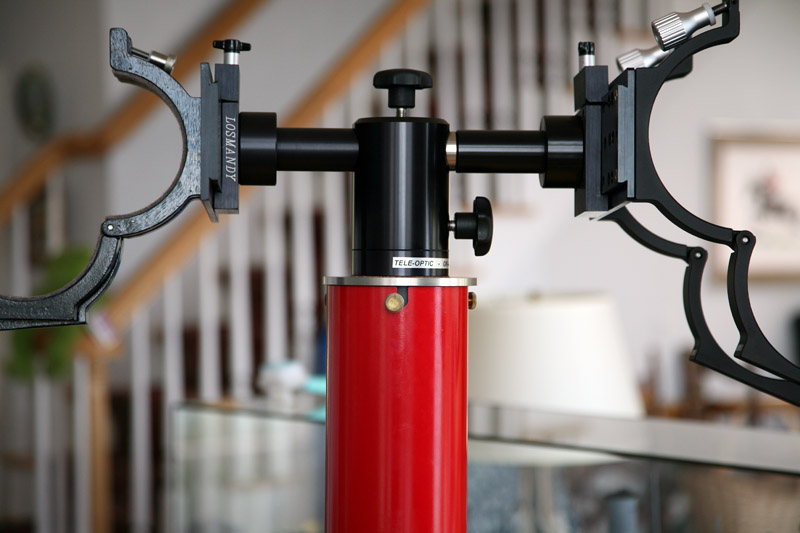 Setup? The ad says “10 seconds to rock solid.” For once not a bit of hype. You simply loosen the plastic bolt on the upper collar where the legs of are held, slide the pier body down on the until you reach the height desired, the legs move out as the height decreases, and then you tighten the screw to lock it in. That’s it. A true 10 second set up and faster than any other pier I have ever used, and faster than any tripod as well.

What do you do next? Drop in the mounting plate with the mount of choice attached, rotate and secure the plate bolts and load your scope. Das ist alles.

How about height. I had my other portable pier set up next to the Quick Draw, an Astrophysics Eagle with the 8” Extension installed. The much greater height extension on the Quick Draw is obvious. (Of course, the Eagle’s much greater weight capacity and fit and finish is another story – but so is the price!) 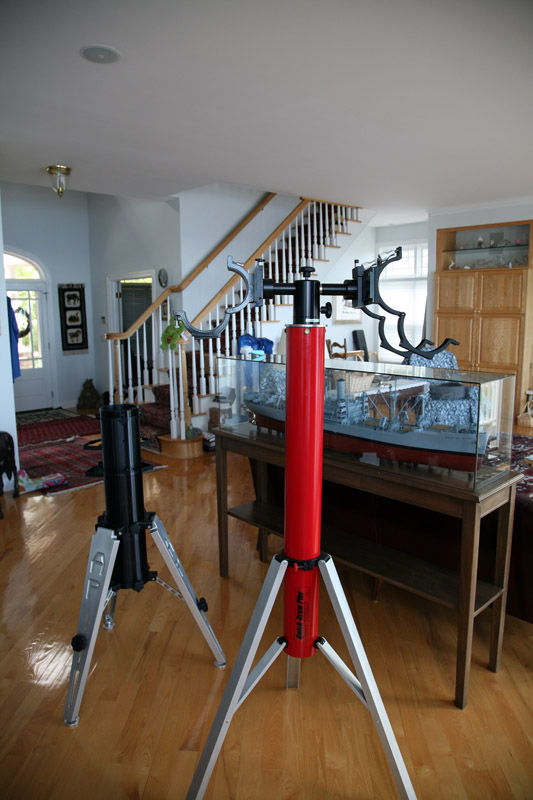 Okay, what will it hold? The photos below show the pier fully extended and set up with my TMB 130 SS with Baader Binoviewer and a pair of Tak LE eps on one arm of the GIRO and my TMB 92.5 SS with a 2” diag and an Ethos 8mm on the other. The pier held it well, no issues at this weight at all (albeit not at the 100 pound limit) but no wobbling, no vibration issues. 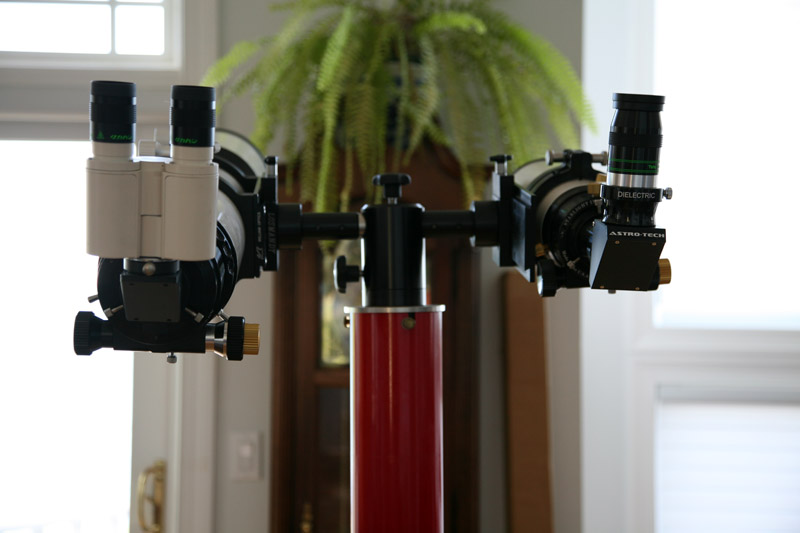 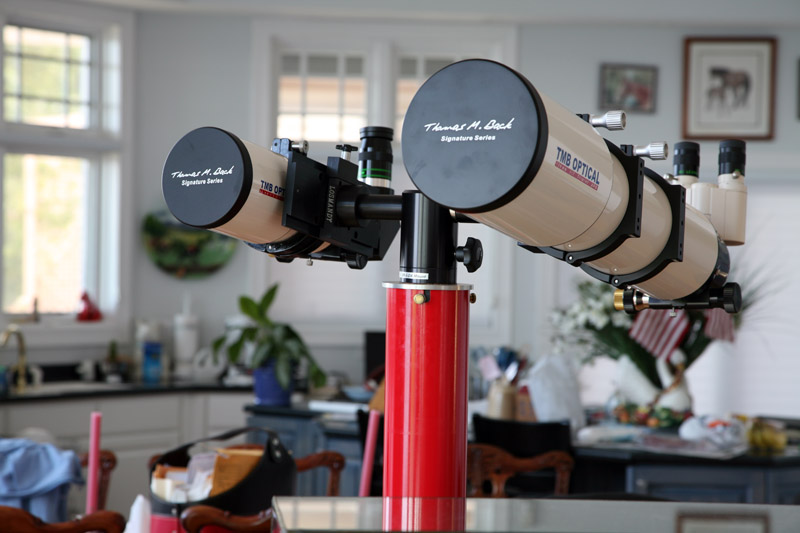 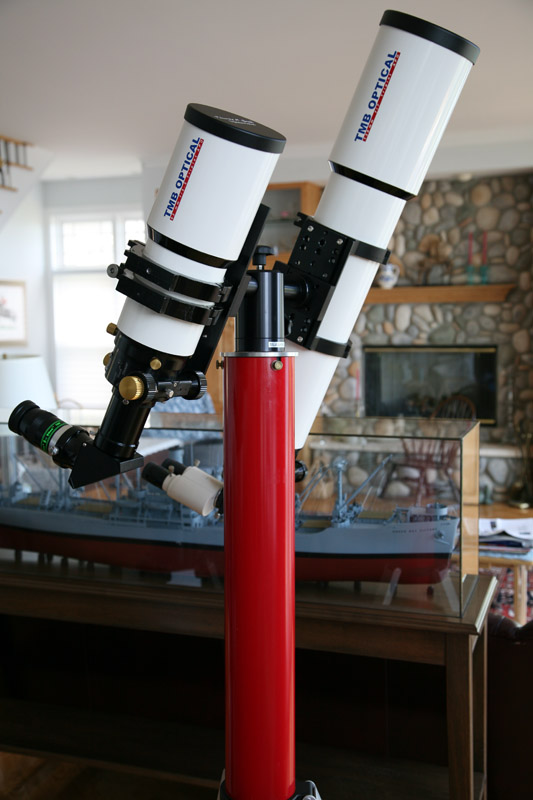 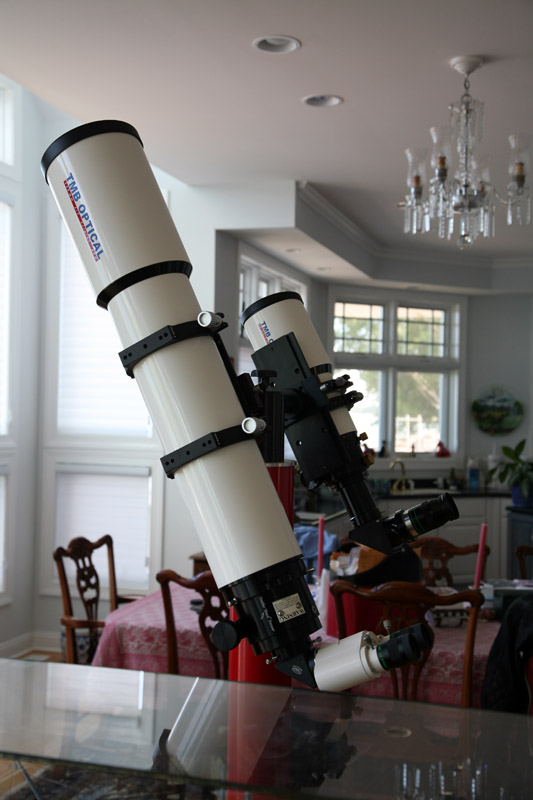 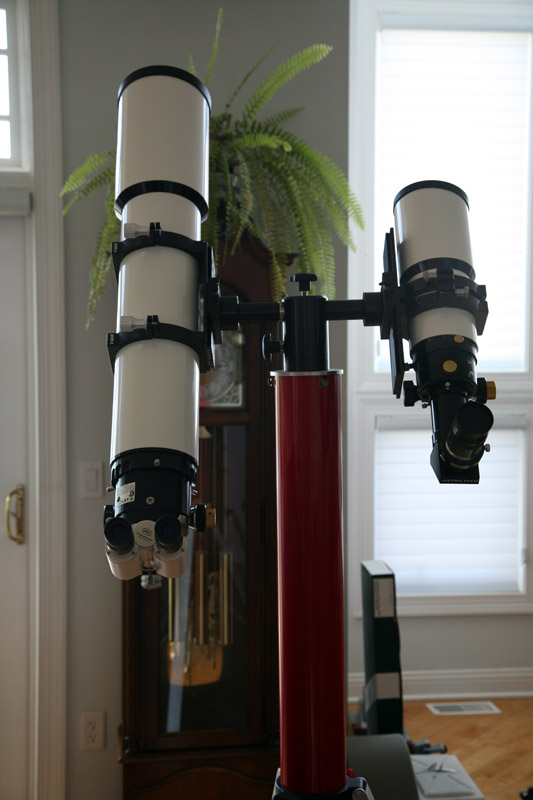 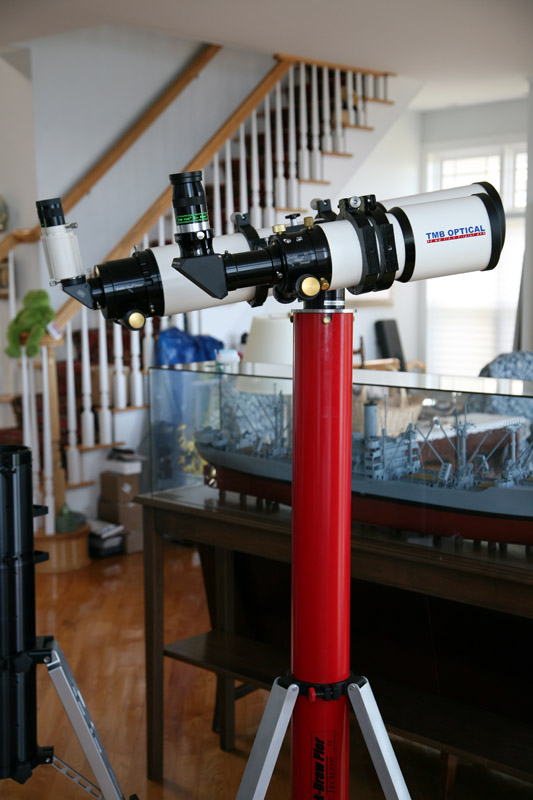 Take down at the end of a session? Remove the OTAs, release and remove the plate and mount, and then one screw lets you slide the legs up and you carry it off.

Perfect portable pier? For light work, sure. I was no doubt pushing limits on this setup and I’d drop it down for mental safety. I’d also like to see the plastic parts replaced by metal, which may raise price, but would do to make me feel a bit better for the long term. The fit and finish is decent, not AstroPhysics level, but again, as described at the company site and very good for the price. On the other hand, the AP is a lot heavier and the ideal pier for big OTAs and big GEM mounts. When I want to put a Mewlon and a 5 or 6” APOs up and spend an evening observing, I’d use the AP. For a quick setup or for a lighter rig, the Tech 2000 Quick Draw is the closest thing to perfection that you will find. The issues are just niggles, the price and speed of setup and carry are outstanding, and I have found another ‘keeper.’

As always, thank you for reading my musings.