Notes from a "field portable" astrophotographer

In the last couple of years more gear has become available for astrophotographers than ever before, whether you're imaging with DSLRs or cooled CCDs. Because of that, choosing between it all--in some lasting way that makes economic sense--is becoming more challenging. While my wife and I have been observing off and on for 12+ years (starting with a 6" homebuilt dob and working our way up) it's only been in the last three years that we've really delved into imaging... first with a DSLR and now with the QSI 540 CCD I'm reviewing today. Our own decisions were guided by a combination of talks with more experienced observers, lessons learned from using older gear, and research including reviews others had written, so I hope this helps others as past reviews helped me.

My experience suggests the QSI-540, both in ws and wsg versions, is a solidly engineered and constructed piece of gear backed by very responsive manufacturer support. Mechanically it has at most minor quirks that can mainly be addressed at the "tips and tricks" level, and the electronics and drivers are excellent. I think it's a good choice for making a complete shift from DSLR to monochrome/tri-color filter CCD imaging, because the sensor--about the same as a square cut out of a DSLR APS rectangular sensor--will provide a familiar field of view for DSLR photographers. A good range of accessories are available, though a bit pricey. A basic one that's missing (at least, that isn't available from QSI or conveniently identifiable) is a high quality 12V power cord. I use one from Radio Shack, but it's not very flexible in cold weather.

How I Picked the QSI

So you understand my own biases, I live in a bright suburb of Washington DC just north of a major international airport. All the astrophotography (and observing) that I do is on a "field portable" basis. I don't think I have any particular bias toward or against any one manufacturer; I just have to balance cost against the capability to make the most of my limited imaging time. In the end, I picked the QSI 540 because it gave me large enough pixels and a large enough FOV to image a good range of targets, but it was just small enough that I didn't have to buy a field flattener or 2" filters, and with the wsg's integrated OAG cover, it saved the need to pack and set up up both my piggyback guidescope (which has to be aligned to the main scope every session) and the extra 10 lb. counterweight the guidescope demands.

What I tested with:

The rest of my system is composed of a TMB-152 f8 refractor on an AP900 mount, and a 66mm William Optics that I use when needed for wide field piggyback work (or in the past, as a guidescope with a DSLR). I used Astrodon filters for LRGB, and Baader 7nm filters for narrowband (Ha/O-III/S-II).

QSI's website has an elaborate listing of specs as do most manufacturers, but a few highlights are important:

2. QSI cameras use USB 2.0, but the transfer rate seems a little slower than 2.0 normally implies; I believe QSI deliberately slows the rate to reduce the potential for error/added noise. Still, it's no big deal; a full unbinned frame downloads in about 10 sec. or less.

3. The ws version has an integrated 5-position 1.25" filter wheel and mechanical shutter; the wsg also adds an integrated off-axis guider that works with a handful of popular autoguiders. If you buy the ws, you can add the wsg upgrade later. The main reason to do this is to support piggyback imaging rather than just prime focus. You can get an adapter for the ws to mount Canon or Nikon lenses, but not for the wsg since the integrated OAG is too thick and takes away the needed backfocus.

4. Both the ws and wsg ship with T-threaded adapters, but with the wsg you probably will want the 2.156" x 24 TPI thread adapter as well to avoid vignetting, and (perhaps) the 2" nosepiece that goes with it. At least when I bought mine, you could talk to QSI and specify the 2.156" adapter instead of the T-thread adapter to save a few bucks over the adapter's $149 cost as a separate accessory (which seemed a little pricey in comparison to the overall $595 for the wsg upgrade). Though QSI doesn't say so, a little research turned up the fact that 2.156" x 24tpi is the same threading as SBIG's STL-series cameras. So depending on your scope and/or focuser, you may be able to skip the 2" nosepiece for the QSI and instead get an adapter threaded to fit an STL... just make sure there's enough clearance between the adapter and camera for whatever autoguider you want to install. If you're using a Lodestar, there's probably nothing that won't fit; with an Orion SSAG, you have to be careful, and with something larger, you really have to be selective.

The QSI comes in its own Pelican case with nicely custom fitted foam, and, of course, double boxed outside of that for shipping protection. In the case, there's just (barely) enough space in the foam's accessory cutouts to fit a small autoguider like an Orion SSAG or SX Lodestar, a 2" nosepiece, the included 12V-110V transformer, and cables. I usually find that storing the USB cables with my laptop creates less of a packing jigsaw puzzle and speeds setup/takedown. Unfortunately, there is not enough room in the case to store both the 12V DC-120V AC transformer and a 12V to battery cable, so I keep one in the case, and the other in an overall accessory bag. The QSI came with a set of good quality allen wrenches as well, and a drivers disk. I already had MaximDL so I didn't buy it with the QSI, but if you need it the cost is additional (albeit discounted).

Before venturing out to image, you need to take off the front cover and load filters into the filter wheel. This raises a point for users of Baader filters... which (at least my Baader narrowband filters) have a slightly higher crown than most. That makes them easy to install and take out, but for the ws version of the QSI that's a slight problem. The stock screws that hold the T-thread adapter onto the front of the ws case project into the case just enough to hit the top of the filter crown, stopping the filter wheel from turning freely with the filters installed. The interference is so slight that you might not even notice it until you get out in the cold and set up, expecting to image. No problem, though, I talked to QSI's support (which was super-responsive even on a weekend) and they sent me a set of slightly shorter screws, which work fine. Because the whole camera is hanging on those four screws, though, I'm always a little less comfortable with this configuration--I like having more screw threads engaged. My recommendation is to either use the wsg version of the camera with Baader filters (which has a lot more clearance and no issues) or to use different filters with the ws version (my Astrodon LRGB filters work fine work fine).

Recommendation: Write down the order in which you install the filters, and keep it with your imaging gear (I put it in a file of "imaging notes" on a file on my laptop that opens automatically whenever I log into an "astrophoto" user account I set up... along with other notes like the runout distance at which the CCD typically focuses, etc.) It's a big pain to discover after the fact that you've inadvertently spent some hours imaging in H-alpha, Red, and Green (which doesn't add to anything) instead of Red, Green, and Blue. I know because I've done it. This is especially important if you change filters from time to time (like swapping between LRGB and narrowband.)

I use Maxim to control the imaging, and in this first year of use have had no issues with driver stability or anything of that nature; it simply worked. The only problems I've had have been user error, like incorrectly configuring Maxim's settings as to which filter I had in which slot, or inadvertently setting the "single auto dark callibration" function, which prevented me from later dark-calibrating the images with a full set of median-combined dark and bias frames.

The thermoelectric cooling on the QSI keeps an extremely even set point. In late spring/summer I usually set to -15deg C, and fall/winter -20. The fans seem slightly noisy in very cold weather, say below 20deg F, and I'm not sure if that's a bearing grease issue or something else. It doesn't seem to be a problem, but it's something I'm keeping an eye on.

With the Astrodon LRGB filters, I found their 1:1:1 color balance works as advertised; I just take equal sets of equal exposures of RGB and everything works fine. Not so with narrowband; the KAI 4022 chip seems more sensitive in Hydrogen-alpha than it is either in Oxygen-III or Sulphur-II. I'm still trying to get a good balance formula, and I suspect it might even vary depending on the target.

For autoguiding with the wsg version and an Orion autoguider, I've used both PHD and the guiding controls in Maxim. There seems to be no clear winner between the two programs with this combo of equipment. I believe--from physically inspecting my setup--that a few occasions where I've had guiding problems have been caused by the whole QSI not remaining completely square to the image plane. For this reason, I'm changing from using a 2" nosepiece to hold the camera in the scope to a threaded adapter that fits the wsg's 2.156" x 24tpi threads (this is why it's good that they are the same size threads as an SBIG STL's... there are lots of adapters out there to fit the SBIG.)

The idea with the wsg is that you focus the main camera, then focus the integrated off axis guider once, to set the difference in focus between the main camera and the guide camera, then lock it in to stay from session to session. This works great... unless you use different sets of filters that aren't parfocal to each other, in which case you may have to refocus the guider when you change filter sets. You may not if the difference is slight; the guide cam doesn't have to be in perfect critical focus to work, and some brands of guiders actually work better when they aren't. I generally leave mine focused so that it's in critical focus with the Astrodon filters, and slightly out with the Baaders. I only need to change it when I'm guiding on a dimmer star, in which case a more accurate focus helps.

Some Results (size reduced for web): 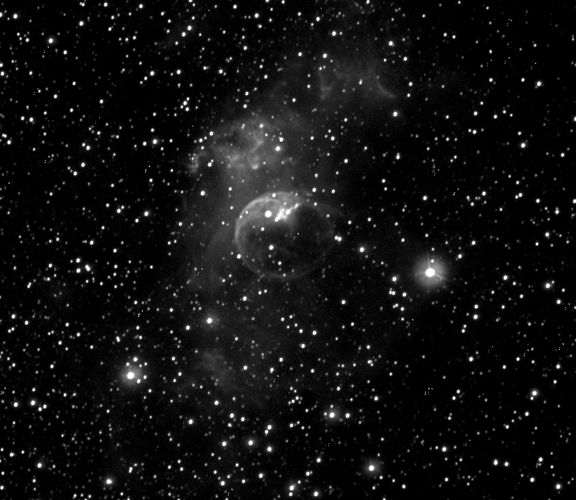 Bubble nebula; combination of 5 ten minute and 10 five minute exposures. Filters hadn't been shipped at this point so this had no IR blocking. Also not fully calibrated, because Maxim had re-defaulted to "simple auto-dark calibration" and I didn't notice. 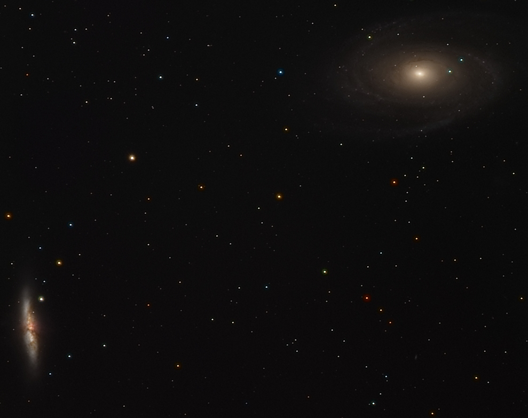 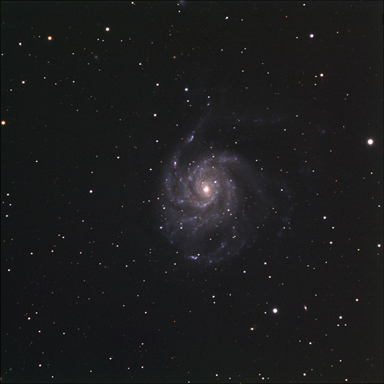 Disclaimer: I have no connection with any dealer or manufacturer, and the views expressed in this review are purely my own. I've tried to double-check my facts, but they aren't guaranteed.