I have had more than one person ask me "what does a cloud sensor do?". I usually get a blank stare or a smirk when I answer "It senses clouds". Most amateur astronomers at first don't see the point of a cloud sensor. Their feeling is they can walk outside and look up to see if it's cloudy or not. My response to them is "Have you ever fallen asleep during a long imaging session? What if it had rained? Your equipment would have been soaked.

I have had the above scenario happen to me, which is why I ended up purchasing a Boltwood Cloud Sensor. The Boltwood Cloud Sensor was designed by Paul Boltwood of Boltwood Systems Corporation. I ordered my sensor back in January of 2005 from the exclusive distributor, Diffraction Limited (the MaxIm DL folks). At the time of this review the sensor has been in use now for about 9 months.

Like any adult kid waiting on a new astronomy item I was inpatient and wanted my new "toy". A week had gone by and I have not received any info about my order, so I sent an email inquiry to Diffraction Limited. I promptly received a response from Doug George (the Chief Cook and Bottle Washer) that there was a problem with the heating circuit. This was allowing snow to collect on the sensor of some of the first production units. Doug explained that this had not occurred with the prototypes. He apologized, and then informed me that there would be a delay in shipping while they fixed the problem. The sensor showed up about 2 weeks later. It was about a month after it was originally ordered. As it turns out, it was worth the wait as my system had no problems with snow build up. It should be noted that currently Diffraction Limited states units are shipped within 2 days of the customer placing the order and my unit was one of the very early units.

The sensor's software (known as Clarify) runs on Windows operating systems ranging from Windows 98 to XP. The software installation went off without a hitch. I ordered my sensor with a 100 foot cable and mounted the sensor on the lower roof of my house (Fig 1.). The cable was hidden underneath the siding and snaked along the outside of the house until it found its way into the family room. This is where the observatory's weather computer resides. I could have gotten away with only 50ft of cable, so the excess was coiled up and placed behind the rack the holds the weather PC. The sensor was attached to the house using 2 right angle brackets purchased at the local hardware store. The 2 brackets were screwed together and then screwed to the side of the house. The sensor was then attached to the brackets via nylon wire ties. No installation brackets are included with the unit because there is no way for the manufacturer to know how the customer will mount the unit. Some may mount it to a house, or a observatory, or on a pole. The unit should be mounted with about a 10 degree tilt facing the direction of the prevailing winds. According to the manufacturers instructions this serves two purposes; it helps prevent rain water from building up on the sensor plate, and it allows the sensor to see the clouds a bit earlier as they roll in. 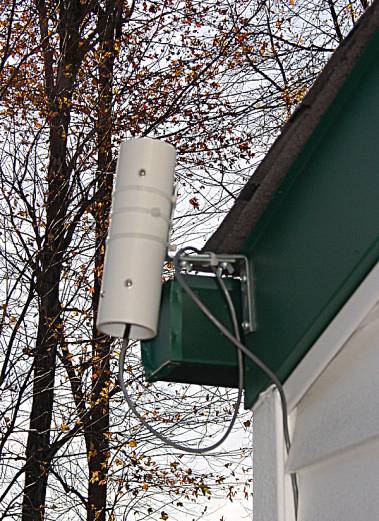 
The sensor is powered by an AC to DC adapter. The power cord and sensor connect to an adapter box that has a standard 9 pin serial port. A DB-9 pin cable is used to connect the adapter box to the PC. My PC didn't have an open serial port, so I used a Belkin USB to serial converter and it worked fine on my system. When I ran the cable I ended removing one of the connectors so I didn't have to cut a bigger hole in my wall. Fortunately the manual covers this and gives you the pin-outs and wire colors to assist you in reassembling the connector and cable. The components contained in the system can be seen in Fig 2.

The Boltwood Cloud Sensor's name only tells half the story. It also detects precipitation. Which means it functions as a rain detector. It does this by means of a wetness sensor plate. The plate senses a change in resistance when moisture contacts the plate. The software reports this as "Rain". When rain is present on the plate a heater is automatically turned on in order to warm up the plate and evaporate the moisture. The heater will continue to warm the plate until no more moisture is present on the sensor. (Notice the 100% heater setting on the rain display in Fig 3). This is how the sensor's software determines when it has stopped raining. Another feature of the software is it is able to detect snow. It does this by keeping the plate warm in cold temperatures. When snow falls on the plate, it melts. As the snow melts the plate senses the change in resistance due to the melted snow and reports it. But since the ambient temperature is below 32 degrees the software reports the precipitation as "Snow".

The accuracy of both the cloud and rain detector are very good. After spending some time with the sensor the user will be able to look at the displayed sky temperature and without looking outside know if it is completely overcast or just light wispy clouds (which may provide some opportunity to get in some observing). The moisture detection system is able to detect very light sprinkles and very light snow flurries. The software also allows the user to set an alarm based on if it is "Clear", Cloudy", "Very Cloudy" or "Wet". The "Clear" alarm is very useful if you are waiting for "sucker holes" so you can observe. That way when a clear area of sky is over the sensor the alarm will sound.

The software can also log the data to the PC's hard drive. In addition if the user it has some programming skills they can write their own software to capture the data and display it via the COM or Active X interface, or via the single line data file. An example of what can be done is shown in Fig 4. The example represents a real-time plot of the relative sky temperature and the local ambient temperature. The time span is user selectable. This particular software was written by Russell Croman and is offered free of charge and is available as a download on Russell's website. This is the software I use in order to tweak the settings on my system. The graph is also uploaded it to the internet so I can remotely monitor the Sky's status. This is useful when I operate my system remotely, as I will know if it is safe to open the dome. 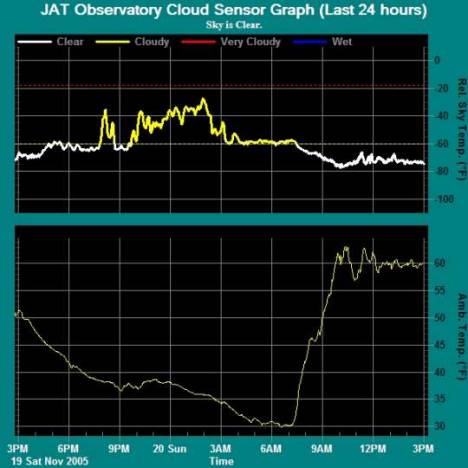 But the best feature I have saved for last. It is the whole reason I purchased the Boltwood sensor. In addition to the software having the ability to sound alarms, the hardware has the ability to send a signal that can be used to close a dome or roll-off roof when it gets "Very Cloudy" or when "Rain or "Snow" is detected. The nice thing about this feature is it can do this without the need for a computer to be connected. It sends the closure signal by shorting the connection across a cable connected to the 3.5mm audio jack on the adapter box. From this jack you can run a line to control the closure circuit on your dome or roof to your observatory. The only restriction here is that your circuit that closes the observatory only put between 0 and +30 volts on the inner conductor of the jack and not more than 150ma of current. (It is recommended that a TIP127 (PNP Darlington) transistor be used instead of connecting the Boltwood directly to the relay (Excessive current draw will damage the Boltwood unit. The transistor should be connected as follows: The Emitter to power supply, collector to relay and a 10K resistor from the base of the transistor to the Boltwood output. "When the Boltwood pulls low it will turn on the transistor and that will power the relay".)

If the user does not have a motorized roof or shutter on their observatory the sensors output can be used to trigger an audible alarm or light. This is the way that that imagers that don't have permanent setups can utilize the Boltwood sensor. In my case since the sensor is mounted on the house and not the observatory the sensor's closure output is routed to a custom built wireless transmitter (Fig 5). In addition to saving me the trouble of having to dig another trench to the observatory, it solved the problem of connecting the closure line to the shutter circuit with is located in the rotational part of the dome. 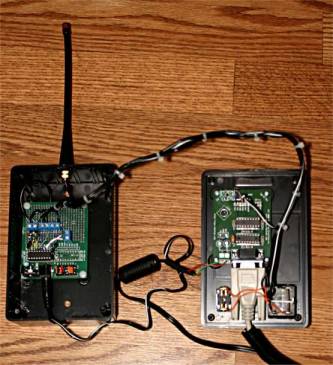 When in become "Very Cloudy" or rains the transmitter receives a closure signal from the Boltwood Cloud Sensor. The wireless transmitter relays that signal to a wireless receiver mounted in the dome (Fig 6.). 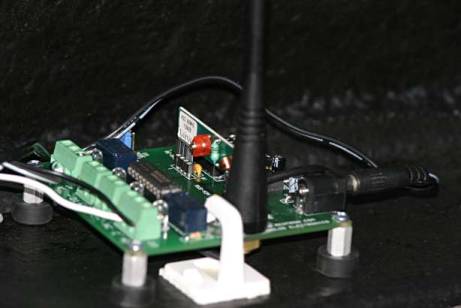 The receiver then triggers the shutters motor circuit and closes the dome. The automatic closure feature of the Boltwood Clod Sensor is a godsend to imagers who do automated imaging while they sleep. No longer do they have to worry about their equipment getting soaked by a passing surprise storm. Having said that, if an observatory owner installs this system they should be sure their roof or shutters are in good working, reliable condition and capable of automated closure with no obstructions before they place the safety of their equipment in the hands of the Boltwood system. Also the user should install a manual bypass inside the observatory that will allow the auto-closure system to be disabled. This is mainly for safety reasons so the roof does not unexpectedly close during maintenance if it becomes cloudy.

Now the pros and cons to the system. The main con to the system is the price. But that is not to say the system is not worth the cost, they are just not cheap to buy. A system with 100 ft of cable is currently $779. Subtract $25 dollars for a system with 50ft of cable or add $25 for systems with 150ft of cable. Systems used in areas with 220 volt service are $40 more. Another drawback of the system is since it was designed for astronomy use it was assumed it would be used at night. The system is not shielded so it suffers from solar heating during the warm daylight hours. This affects the local ambient temperature reading (raising it) and can causing the system to report the sky as being cloudier that it actually is. The good news is as the user gets used to the system this is not much of the issue.
Now the pros; The system works and it is reliable, this translates to sleep for automated imagers. The system is also versatile and adaptable. I personally believe the system is a must for anyone that operates a remote or unattended automated observatory or does automated long duration imaging. You can now know if it is truly safe to open the observatory. You can now sleep and not worry about if it is going to rain. My system has functioned perfectly and constantly for the past 9 months

On the rating scale I give this device a big 2 thumbs up (Hubble Telescope rating). It is the only complete, commercially available cloud sensor that I know of on the market with all the features and functions listed above.