I’m in astrophotography a rather short period, only 6-7 years. I have used a few cameras and since Feb of 2011 I’m using a QHY-IMG2Pro (IMHO one of the best implementation of the well known Sony ExView HAD ICX285AL ccd). The last years I resisted jumping on the KAF-8300 wagon. Yes, 8300 has a huge FOV. It has smaller pixel size fitting better with the short FL used on scopes like mine. And yes, it produces very nice photos. BUT, I never liked the noise levels, the reduced QE or the need for a mechanical shutter. ICX285Al was the right for me. Then the news hit the road about the two new CCDs from Sony: ICX674 and ICX694. Apparently they offer the highest QE in this category (77%, higher even than 285AL), progressive scan with electronic shutter, extremely low noise, good full-well capacity, 3 or 6MPixel and all of these with 4.5um pixel size!!! The FOV is not as big as with 8300, but nevertheless, it is far better to what I have so far. Soon I realized that my next camera most probably will be based on ICX694. But I decided to wait for QHY to implement it for a few good reasons: better cooling than the competition, prompt after-sales customer’s support and (usually) nice price. When QHY asked at the forum for beta testers, I offered to assist and now I’m happy to test QHY22, QHY’s implementation of ICX694 6MPixel CCD. This mini-review contains my first impressions and my first attempts to use the camera at the field - although this is still a work in progress.

I have to clarify: my relation to QHYCCD is that of a happy customer, nothing more. These are just my personal opinions, hopefully unbiased. Use them in a as-is basis, I’m nothing more than an enthusiastic amateur.

QHY sent me the camera middle of December, but due to Christmas period, big delays at the customs office and a business trip, I finally managed to get it on the 31st of January. Inside the box I found:

There was no center/tilt adapter like the one that came with the IMG2Pro, something strange since the CCD is bigger and the tilt adapter is very helpful. The answer from QHY is that the adapter has been redesigned and was not included in the evaluation package I got. The CCD is 1”, so it can be used with T2 or 1.25” nosepieces and 1.25” filters without worrying about vignetting (more on this later). Mind that the vendor mentions that an anti-dew heater is already pre-installed on the front window. This and the rechargeable desiccant plug are very nice touches for the unfortunate SpongeBob like me, residents of the underwater city of Bikini Bottom. At the back side you can see the USB plug, the DIN plug for the power from DC201, a 4-pin port for controlling QHY’s filter wheel and two golden plugs (mentioned from QHY as trig-in and out, providing access to signals before and during the exposure – don’t ask me, not sure where they are used for).

I had already installed the device and the ascom drivers on my laptop, along with the newest version of EZCap 3.11 – QHY’s own capturing software. My first tests have been performed indoors. I tried to use the camera on the field, on M106, on February 2nd, but weather decided otherwise, more on this later.

During my indoor tests I used a universal switching power supply, made for laptops, set at 12V/5A. Nevertheless no extra noise has been introduced in the signal, meaning that the implementation of DC201 is very robust and external noise sources are well filtered. The first time I fired the camera I noticed strong banding noise, but I did not panic – a close investigation on the cables and the plugs showed that the DIN plug of the power cable from DC201 to the camera was not firmly plugged into DC201. Really, IMHO this cable with the DIN-like plugs is a weak point in the design of all QHY cameras. It can be unplugged very easy, in the past I baked a Q285M because I bent the fragile pins in the dark, and I had strong banding noise with IMG2Pro because of a defective cable - which BTW was found after an hour of remote support session from QHY into my laptop. So, as soon as I connected everything firmly, all banding noise disappeared.

The drivers worked immediately and both EZCap and MaximDL (via ascom) worked out of the box. But Nebulosity 3 could not connect to the camera via ascom. At QHY’s suggestion, I copied two DLLs from EZCap into Nebulosity’s folder and that fixed the problem. No software problem has been noticed all the days I’ve been testing the camera with two different laptops (Win7 Pro, 64bit both, with latest ascom installed). The drivers gave me the feeling that they were mature and robust – they just worked.

The camera’s fan is less noisy than the one on QHY-IMG2Pro – a small but welcomed difference. The cooling system dropped the camera’s temperature -45C below ambient in less than 10 minutes and kept it rock stable at the setting point during all of my sessions so far. No surprises here, all these have been implemented with IMG2Pro also and were one of the reasons I preferred QHY’s cameras.

I used two excellent articles from Craig Stark from Stark Labs, one mentioning how to set the “gain” and the “offset” of my camera (Gain, Offset, and Bit Depth, Ask Craig, Stark Labs, Jun 04 2008) and the other how to perform an evaluation of the basic parameters of the camera (Signal to Noise Part 3: Measuring Your Camera, July 7, 2009, Cloudy Nights) . I measured that, for best performance, I should put offset=128 and gain=3 (in a range of 0 to 63). Gain could have been left to 0 also, but I preferred to put it a bit higher to cover the full dynamic range of the CCD. With these two parameters in place I measured the basic parameters of the camera. The results are:

The dark stability diagram confirms my observations about the cooling system, while I got almost textbook FFT diagrams, with no residual noise apparent in the read noise frame. The full results of this evaluation can be downloaded from this link , while the raw files are free to download from this link.

Next step was to try the camera at the field. I visited my observing site during the weekend 2nd to 3rd of February. I unplugged IMG2Pro from my FSQ106N and plugged QHY22. The combination[1] gives 1.76 arcs/pixel imaging scale at f/5, while it can give 1.1 arcs/pixel at f/8 (or, in my case 1.2 arcs/pixel with f/7.8). The camera fit almost immediately with my setup, I just had to trim a bit the distance with the guiding camera, otherwise the system worked almost immediately. The night seemed very promising and I aimed for 6 hours of HaRGB on M106. Focusing, centering, guiding, all worked as they should, and I programmed for 10mins sub-frames. The first result (which can be downloaded in raw format from this link (7.7 Mbytes) was very promising, so I programmed everything and went indoors, controlling the system remotely. Of course what happened is what always happens when you first test new equipment: I got asleep, clouds appeared, and by the time the alarm clock woke me up for the meridian flip, the night had been ruined. Very few frames worth keeping and the final result are mediocre. The photo below is a combination of processing from me and my good friend Ilias (raxxla). You can download the full image from this link. 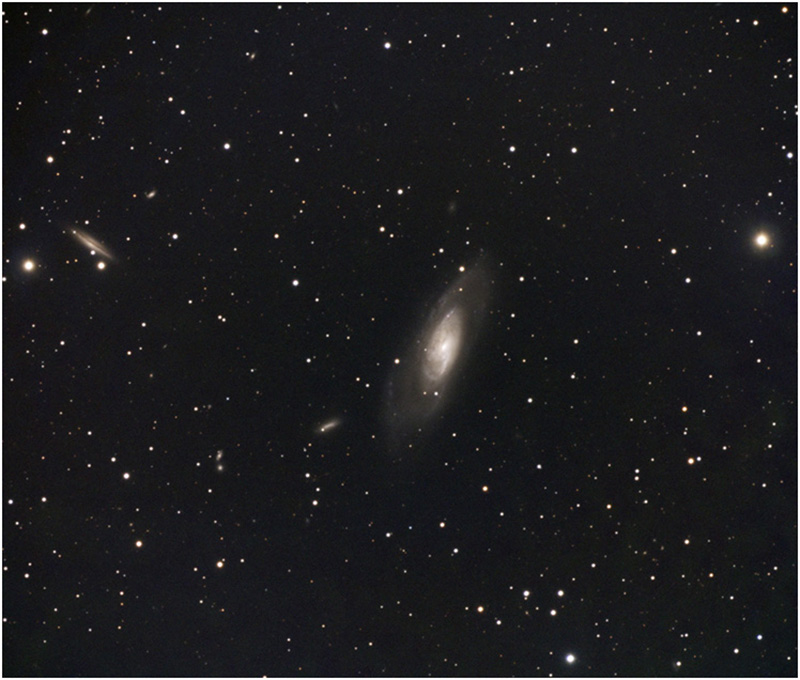 The stars are wonderfully round, apparently the smaller imaging scale in combination with the 6Mpixels worked in favor of them.

The camera captured tons of details with just 10mins of sub-exposure. You can see from the first raw red frame that it has great potential.

There were no frost or dew issues. My field tests are performed near the sea with humidity constantly over 75% - with Q285M in the past I had to fight dew 8 out of 10 times. With IMG2Pro I had a minor dew issue only one time in two years. QHY22 with the heated anti-dew design should be capable to work on very difficult sites. Apparently the cylinder body in combination with experience earned from other cameras has produced a very good design.

I managed to keep the cooler rock stable at the setting point of -30C all night with a 45AH battery, while also powering the mount (mostly tracking with auto-guiding) and a robofocus motor.

I have strong vignetting. It is apparent on all of my frames. I’m not sure where I should address it because I have the strong feeling that the camera was not correctly aligned to the filter wheel and the imaging path. Next time I will realign everything and will test again with a 1.25” and a 2” carousel.

I decided not to take a set of darks but just one and use a bad pixel map extracted from it – this is a trick I use years now with IMG2P, which worked just fine with QHY22 also – these CCDs have very negligible noise. The 10mins raw dark frame can be downloaded this link along with a master bias.

Although as I mentioned, I consider this as a project still in progress, I have a very good feeling about QHY22 so far. The camera seems to work very well into the specifications with no bad surprises. The CCD offers tons of resolution with an imaging scale that fits very well with the short FL scope I’m using. The cooling system is superb; there are no frost, dew or banding noise issues. The software worked without hiccups and was rock stable during all of my tests. I still have to clarify if you can use 1.25” filters without severe vignetting or just my imaging train needs re-alignment. I start having thoughts that shortly I will have to give my IMG2P away. Although I love IMG2P, a camera like QHY22 is really a big upgrade and I will not be able to justify keeping both for long.

Update 2013-08-07: Unfortunately I did not have enough free time this year for the hobby, but here a few photos taken with the camera (see them in 1:1 resolution):