Just recently, a new thread in the Beginner’s Forum of CN alerted readers of a special offer by Meade on their NG60-SM refractor, for $24.99.  I had never used a 60mm refractor before and felt that the price was low enough to justify purchase, so I took the bait.  I ended up paying $36.75 (including shipping and sales tax), which is the lowest amount of money I have ever paid for a telescope (Figure 1). 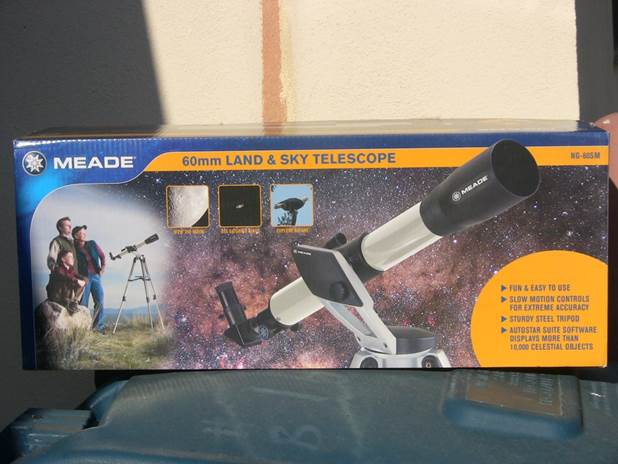 The Meade NG60-SM is a 700mm focal length (F/11.7) refractor, standard size for most 60mm aperture refractors (Figure 2).  The silver-looking parts are aluminum metal, while the black parts are plastic.  Focuser movement using the rack-and-pinion is smooth, and there is a good 4.25” of focuser travel. 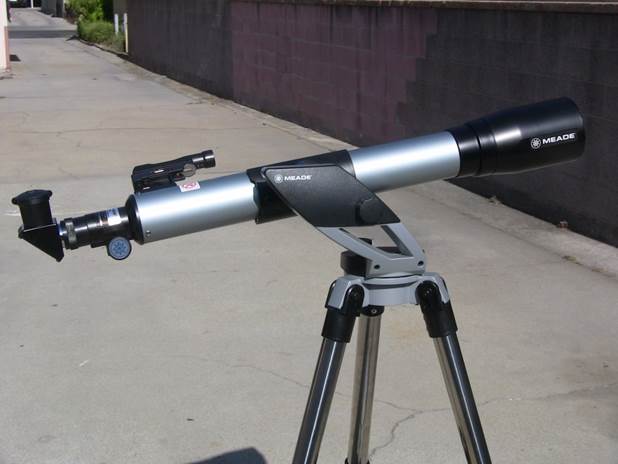 The tripod legs are made of steel, but when fully extended, do not spread far apart enough to provide shake-free views at magnifications of 100X or more (Figure 3). 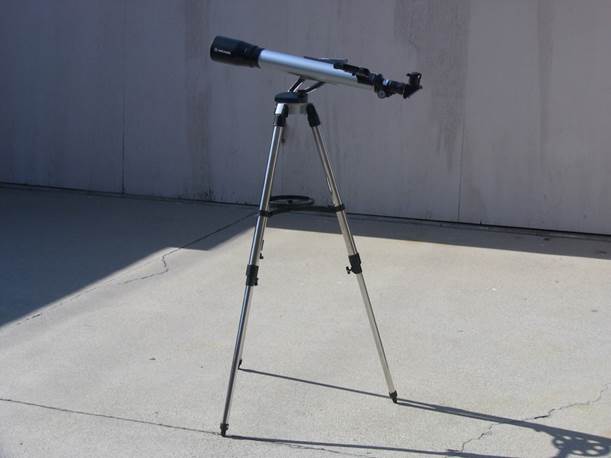 The OTA is secured to the mount by a plastic attachment bracket (Figure 4).  This seems to be the most fragile part of the scope and the area most likely to break with rough handling.  The mount also has two slow motion control knobs for altitudinal and azimuthal movement, attached to the side and base of the mount. This allows for smooth tracking of objects and is an attractive feature of this scope. 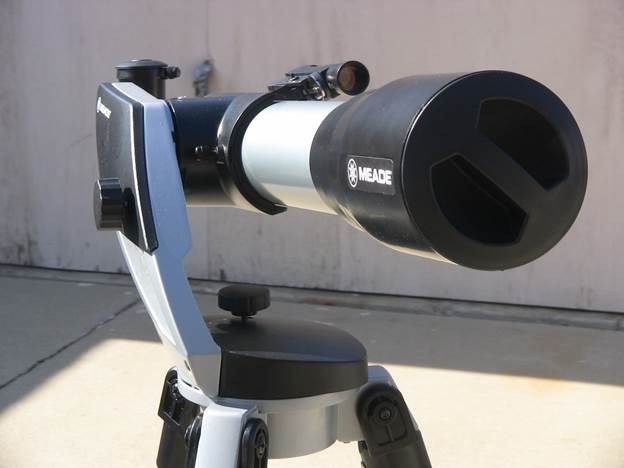 Included is a red dot finder with two brightness levels (Figure 5).  Unfortunately, both levels (1 and 2) project a very bright red dot on the target, which blindingly obscures all but the brightest objects. 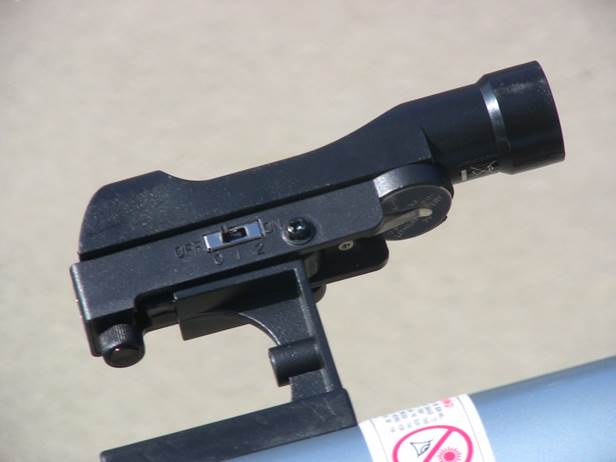 The scope comes with two eyepieces - a modified Huygens (MH) 25mm and 9mm – and a 90 degree mirror star diagonal (Figure 6). 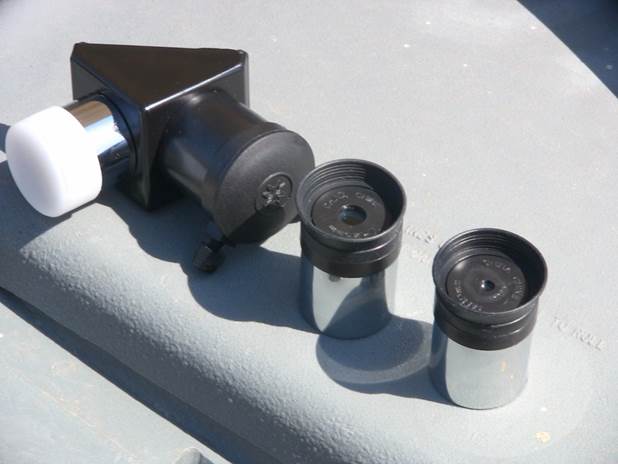 The eyepieces are metal bodied with foldable rubber eyecups, while the plastic bodied diagonal is a true reverse-image star diagonal (as opposed to a 45 degree terrestrial correct-image prism).   Although the 25mm gives a narrow field of view expected of a 2-element Huygens, the modified 9mm actually gives a wider field of view than the standard 8-10mm Huygens.

No high magnification claims are to be found anywhere on the box; to their credit, Meade states on the back (Figure 7):

“Any astronomer will tell you that light gathering – not power – is what matters.  A small, crisp image is better than a large hazy one” 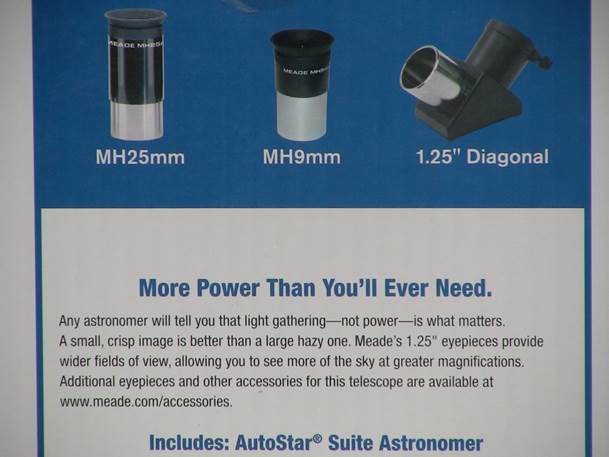 Meade makes a handsome blue padded carrying bag for this scope (Figure 8), which is not sold separately but comes in a bundled package of scope + bag.  The sale mentioned in this review did not include the bag, but I managed to find one on EBAY for $28, including shipping. 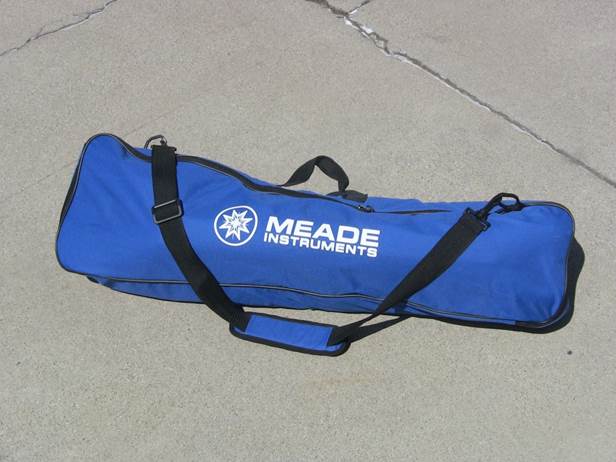 Both mount/tripod and optical tube fit snugly in the bag (Figure 9), and there is enough room for accessories.   This bag is small enough to fit in an airline overhead luggage compartment, making it a perfect grab-and-go travel scope. 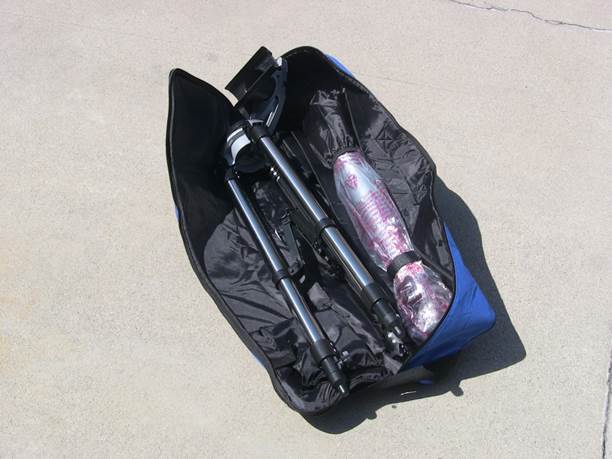 To remove potential pinched optics, the first thing I did before testing the scope was to remove the dew cap, unscrew the objective lens cell, give the scope a very gentle shake, and then screw the cell back on, just tight enough so no sound of rattling lenses was heard from the front end of the scope.

Looking through the tube with a Cheshire refractor eyepiece, I noticed that the collimation was slightly off.  Although probably not critical given the long focal ratio (F/11.7) of this scope, I improved the alignment of the tube by adjusting both the front objective assembly and the focuser end.

I tested this scope in light-polluted (white zone) conditions at my front home driveway, and at a light-polluted hotel parking lot in an otherwise suburban (orange zone) site.   The stock MH25 (28X) and MH9 (78X) modified Huygens eyepieces were used, along with a 32mm Plossl (22X) that came with the current version of the Celestron C90 Maksutov spotting scope.

For deep-sky objects, I used the 32mm Plossl to star hop to my targets, switching to the MH25 or MH9 for a closer look.  For enhanced views of planetary and emission nebulae, I used a Celestron UHC broadband and an Orion Ultrablock narrowband filter.  Unfortunately, the filters could not screw onto the Plossl, only on the MH eyepieces.

Before adjusting the collimation, I managed to get a first look through this scope via the Moon.  I was amazed at the sharpness and clarity of the views through both stock eyepieces (28X and 78X).  It was perfect in terms of brightness – not too bright or dim.  But the most surprising thing was the almost total lack of false color at both magnifications.

After collimation, my next celestial target was Saturn, whose rings are currently at an optimal viewing angle.  At 28X, the planet was tiny, but both disk and ring(s) looked razor sharp.  Titan was detectable with averted vision at 28X, visible with direct vision at 78X.   Using a 6mm (117X) wide-field Expanse-clone eyepiece, the view through the eyepiece was shaky, but Cassini’s gap appeared to be detectable on both ends of the rings.

After viewing the solar system objects, I did a star test on a bright star – both inward and outward out-of-focus views showed a central dot surrounded by round concentric rings.  No pinched optics!  So I was ready to go (Figure 10). 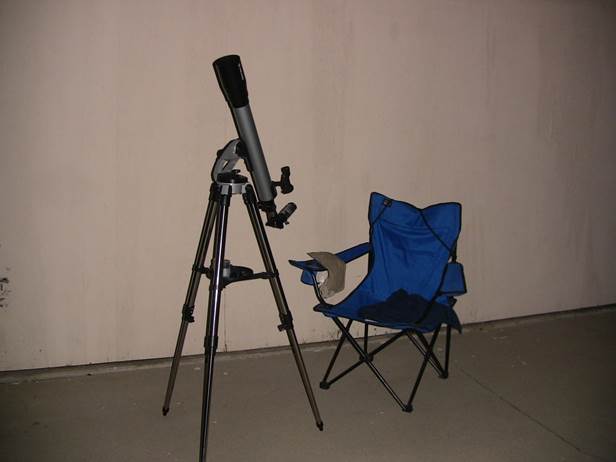 When Albireo was focused to a point at 78X, the two components showed perfect Airy disks.  In recent memory, the only views that came closest to being this pinpoint sharp were through my 50mm Galileoscope refractor and possibly the Celestron C90 Mak.  My first ever scope, the 50mm Tasco 66TE, may have also delivered similar sharp views back in the 1980’s.

Overhead, I was easily able to spot M15 (globular cluster), M29 (open cluster), M57 (The Ring Nebula) and M27 (The Dumbbell Nebula) with direct vision, and M71 (globular cluster) with averted vision.  In particular, the two nebula filters (especially the narrowband) allowed both the Ring and Dumbbell nebulae to show good structure at 78X.  To see these objects from my light-polluted front driveway was very encouraging.  I was anxious to see what this scope could do away from home…

Not long afterwards, I set up my scope in a light-polluted parking lot of a hotel where I was staying, in a small town situated in an “orange-zone” site, according to the Clear Sky Chart website.  The parking lot lights were so blindingly bright, I couldn’t see anything overhead.  The view towards the southern horizon (facing a freeway) was less affected, so I pointed my scope in that direction (Figure 11). 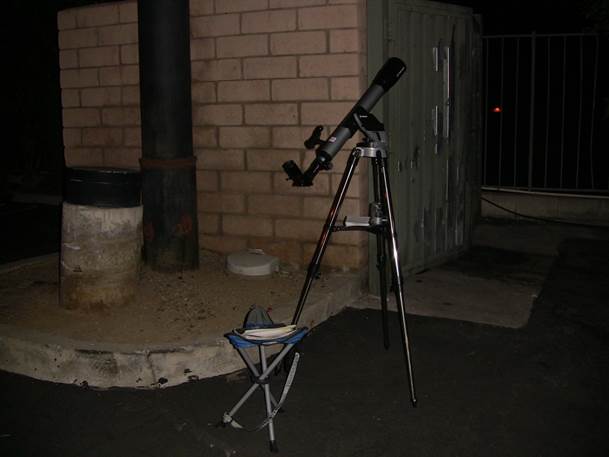 Fortunately the scope was able to cut through the glare of the parking lot lights, so I had no problems seeing the following deep-sky objects in Scorpius, Sagittarius and Serpens:

Open clusters M6 and M7 were beautiful at 22X, while the M24 star cloud filled up the entire FOV at that magnification.  At 78X, the stock MH9 eyepiece provided the magnification necessary  for an optimal view of the small open cluster M18, partial resolution of globular cluster M22 (showing a few stars glimmering from the grainy cloud), and the non-stellar nature of tiny planetary nebula NGC 6818.  M17 (the Omega or Swan Nebula) responded well to both nebula filters, especially the narrowband.

Having used mostly Newtonians of 76mm aperture and up since returning to the hobby a little over 3 yrs. ago,  I wasn’t sure what to expect from a small 60mm refractor (although I did notice the optical quality of the smaller 50mm Galileoscope).  Therefore, I was pleased with how the Meade NG60-SM delivered on all celestial objects - the moon, planets, double stars, star clusters, and nebulae.  I was especially impressed with the views of deep-sky objects using just the stock eyepieces and star diagonal, although the wide-field views provided by the 32mm Plossl made star hopping much more easier, giving wonderful low-power views.  In their classic book “Observing Handbook and Catalogue of Deep-Sky Objects”, Christian B. Luginbuhl and Brian A. Skiff had this to say about the 60mm refractor:

“Despite its comparatively small size, this sort of instrument is quite useful for deep-sky observing.  From a dark site all the objects in Messier’s list are visible, and some of the best views of galactic nebulae are obtained with these telescopes at very low power.”

Combined with the Meade carry-bag, this makes a great airline carry-on travel scope.  The portability factor adds to my enthusiasm for this Meade product.

But again, here are some caveats:

The brightness levels on the red dot finder can overpower targets

The mount is not very stable when using magnifications of 100X or more.

The plastic bracket attaching the scope to the mount is susceptible to breakage if not handled carefully.

Having had some experience handling various types of telescopes, these limitations are a minor hindrance to my use and enjoyment of the Meade NG60-SM, although they could be more problematic to first-time telescope users.