The Vixen FL55ss is a diminutive doublet refractor released by the Japanese brand in 2018.

The FL55ss came to my attention while searching for a 300mm lens, so the focus of this review will be for the most about its proficiency for wide-field deep sky astrophotography (or the lack of it); in fact, the refractor is advertised mainly as an astrograph, even if, in order to get the best results, one of the two available "photographic kits" (field flattener, or field flattener and focal reducer) should be purchased.

The FL55ss is available just as optical tube assembly: it comes with a 1.25" eyepiece holder, an extension tube for straight observing and a Vixen-type dovetail bar screwed to the tube through  two 1/8" screws (the FL55ss has also a single 3/8" threaded hole).

Since the focuser does not rotate, the possibility to adjust the framing angle is left to an optional adapter, just as with smaller Takahashi refractors.

However Vixen option is much more brilliant, because it is the optional camera's mounting ring itself to allow the rotation (at the time am writing this such rings are available for Canon EOS and Nikon mounts).

The refractor is a tiny thing, a bit over 1kg heavy and 28cm long; the weight can be further reduced by replacing the dovetail bar with a photographic quick release plate (e.g. ARCA-compatible) even if, to be able to properly balance the lens, a rather long plate is needed: with the eos1100d body the center of weight lies more or less 9 cm behind the rearmost 1/8" screw.

The FL55ss is proposed as an apochromatic refractor (a two-element design, with one of the lenses made from a crystal of calcium fluoride) and declares an aperture of 55mm for a focal lenght of 300mm.

I performed a star test on my sample (4mm Abbe eyepiece, with  and without Solar Continuum filter) and a Ronchi test (10lines/mm) with these results

-good correction of low order spherical aberration (near identical intra/extrafocal patterns at 1.5mm defocus, smooth energy distribution), findings consistent with a small degree of undercorrection (my estimate, based on the comparison with Suiter's printed samples and the FC100DL own star test, is for a value better than 1/6th wavelenght and closer to 1/8th wavelenght)

The refractor showed a strong field curvature (as can be seen in picture 1), almost totally addressed by the field flattener (picture 2) as far as aps-c sized sensors are concerned; the field is still reasonably flat when the flattener is used toghether with the reducer (picture 3).

Stars are rather tight for most of the field; however a certain amount of coma can be perceived already with the aps-c sensor of the eos1100d (pictures 4 and 5); the correction of chromatic aberration is very good, and, as it can be seen in picture 5, the corrector and reducer coating are effective enough to use interferential filters just in front of the sensor (here the filter was an Astronomik CLS-ccd), despite the system chart suggests to use a 52mm filter before the flattener

There was no uncertainity in the determination of best focus.

The Ronchi test confirmed a very small degree of undercorrection and the absence of zonal errors.

The FL55ss seems built and designed with care, even if there are few rough spots. The refractor exhibits a good black matte paint and efficient baffling, granting excellent control of stray light and reflections; due to diminutive sizes there is no need for a retracting dewshield (which, by the way, would add unneccessary weight), but it could have been useful to thread the front of the dewshield to accept photographic filters.

The focuser is a single speed rack and pinion unit, smooth and accurate (in my opinion better than the unit equipping the FC100DF and DL refractors, which is already a rather good stock focuser); as it is common among photography-geared refractors, the drawtube has a limite excursion and to get focus extensione tubes are provided.

The tubes have to be screwed and, while this gives some advantages when shooting, it is a bit nasty if the refractor is employed to observe (Takahashi's quick release system is, under this perspective, easier to handle but, again, it comes at the price of greater weight).

The focuser has a single-speed knob, but, since use a Bahtinov mask to focus the camera, so far have not felt the need to upgrade; more bothersome is the fact that the rather large knobs are located more or less where the center of weight lies, and, with some mounts, have been forced to remove one of them because it would hit the clamp's knob otherwise.

The refractor is provided with just a 1.25" eyepiece holder, but I do not see this as a major shortcoming: 2" stardiagonals and eyepieces are larger (and often heavier) than the refractor itself and, because of the very short focal lenght, even the shortest 2" eyepiece (e.g. 20mm Ethos) would yield extremely low magnifications, so in such case I would rather resort to binoculars (even hand-held ones such as 10x50, 12x50 etc...).

I was not much interested in the FL55ss visual performances, and indeed these are nothing to be excited about due to very limited aperture.

Even as a travel telescope, the FL55ss would lag behind 20x80 binoculars at low power, and behind any run of the mill 3.5-4" catadioptric as far as resolving power is concerned; the only saving grace of the tiny refractor (well, "finderscope" could be a more fitting term) lies in its very good optical accuracy, which translates in very high contrast and pleasant views.

Low power observations of star fields and large nebulae are quite pleasant, as long as the very strong field curvature can be tolerated (and provided that the eyepiece does not add too much off-axis asthigmatism); however, despite the high contrast, a substantial inablity to manage high magnifications because of the resulting exit pupils puts a serious limit to the FL55ss deep sky performances.

The field flattener may be emloyed visually, but the provided extension tube allows only for straight views; I suppose that custom adapters could be made to retain the possibility to use a stardiagonal.

Small apertures are often praised for the peculiar way they show stars and double stars, and the FL55ss is not an exception: within the limits of its low resolution and modest magnitudes reach, the small refractor is a very pleasant telescope for double star observations due to very stable diffraction patterns and nice optics (truth be told, there is a boatload of double stars which could be observed even in a 55mm aperture, and some of them are among the most spectacular deep sky objects).

On planets and Moon the low image scale puts a serious limit to what can be seen; the good is that a seeing so hideous to mask 2" wide details is extremely uncommon in my area, so views will look always crisp and sharp.

In general terms, the hardest part to use such small telescopes is to accept their limits: what it is a challenge in the 55mm refractor would be obvious in a larger telescope, which would require to set the bar higher to attain a similar level of challenge, but what does not change is the fun in the challenge itself.

I have spent many hours searching for 4 and 5km wide craters, and was just as fun as hunting 1km wide ones through a larger telescope; the same happens on deep sky objects, being them double stars or diffuse objects.

The refractor is so small and short that can be handled even without a mount, just like a straight spotting scope; even the smallest and weakest mount can handle it with little effort, and the issue is rather to find a mount small enough: I use  it for the most on a small photographic tripod, exploiting the 90° tilted ballhead as altazimuthal mount, or atop the Vixen Polarie Star Tracker.

All pictures were taken with a Canon EOS 1100d camera, except for the Moon in picture 7 which was taken with the ZWO ASI120MM camera

Overall judge the FL55ss a good product. As a wide field astrograph is very proficient and easy to use, so would suggest it wholeheartedly, even to beginners (usually at this stages apreture does not matter, while  the clever Vixen mini-refractor is very user-friendly and, at 300mm, gives a more forgiving samplng than the popular 60-80mm rebranded models).

The price, while not cheap in absolute terms, makes the FL55ss a very interesting alternative to mid-tier photographic lenses (remember that, with the full kit, the FL55 can cover both the 200 and 300mm focal).

Since I did not purchased it for stargazing, feel harder to give an opinion about its "visual" prowess: the best I can do is to underline that those purchasing (knowingly) such a telescope for stargazing are well aware about their aims and what could (or could not) attain, and, within this limits, the FL55ss is an excellent performer; however it is up to you to decide whether a finderscope is worth more than 800€...

These are my opinions about the sample I actually own; I can not foretell whether every sample of the FL55ss will behave likewise (even if hope so).

I have no interests in Vixen ltd, nor in astronomical or photographical equipment trade/industry altoghether, and all the cited equipment has been purchased through standard commercial sources.

Great review. I do think these small refractors can be a lot of fun.

Another application for these small telescopes is spectroscopy! 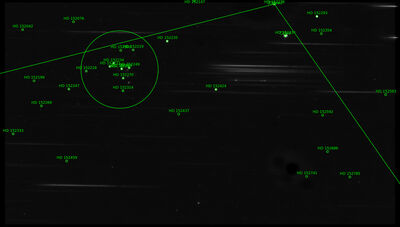 Here is the annotated spectrum, clearly showing features of a WC Wolf-Rayet star. 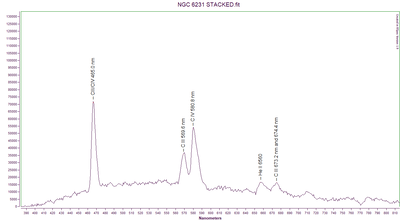 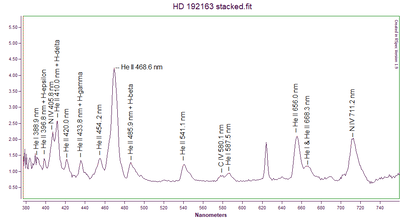 Here's a spectrum of planetary nebula NGC 6886, that is a mere speck even in much larger apertures, but reveals some details in its spectrum. 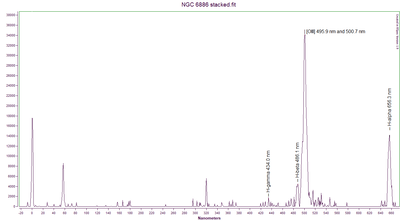 Thank you for promoting these wonderful small telescopes.

Good review!  I wonder though if anyone has compared these small, fast refractors against normal camera lenses?

Where are the pictures of the scope???

@RichA
I use also a Canon ef200 f/2.8: the FL55ss is noticeably better even at f/4 (less CA, tighter stars, less coma).
The lens however is smaller, lighter (but the refractor+reducer is smaller than a 200 and a 300mm lens) and much faster.
I focus manually, sometimes with the help of a mask, and feel easier to do so with the refractor.
The lens is obviously more handy for daytime photography

the star tests I have seen on a full frame via astrobin yield un impressive stars at the edges, I have no way of knowing if this was because of spacing. Have you tested with ff?

No, I have only an aps-c sized camera.

On Vixen's website there are the spot diagrams for flattener and reducer+flattener, with flats and a picture taken with a Canon camera (https://www.vixen.co...roduct/37253_9/ ).

I also contacted them through the site asking about spacing because am still pondering my next camera (FF DSLR or cooled ccd), and a couple of days later they answered me sending a diagram from which I understood that the sensor has to be 63,5mm behind the reducer, and that the adapter I have offsets that distance for Canon's cameras.

How does it compare to Williams Optic Redcap 51 APO?

I can not say since do not own the RedCat